Shopping Out of the Gate

First, dear readers, let me share with you the story of how I found myself at Orlando International Airport at a time when our next scheduled Disney trip was three whole months away.

We have family in the Tampa area, so we thought we'd go against the summer vacation current and head down there (from New Jersey) for a long weekend visit. We were in an Uber on the way to the airport for a Thursday late-night departure when we got the alert from United Airlines that our flight yto Tampa had been canceled due to weather (even though the weather was perfectly fine). We continued on to the airport, figuring we'd do better in finding another flight there. We waited in line for almost an hour, fought with the disinterested man behind the counter, and wound up with a 6:30 p.m. flight down that Saturday, effectively shortening our already short trip by two full days.

We were toying with trying to fly standby the next morning and called United Airlines to ask a question. The nice woman on the phone asked if we'd considered flying to another airport. We looked at each other and wondered why we hadn't thought of that (and why the—I'll just say it—jerk at the airport didn't suggest it). She was able to get us on a 7:30 a.m. Saturday flight to—you guessed it—Orlando. My sister said she was willing to drive the extra hour to pick us up, and this way, we'd only lose a day of our trip. So we booked it!

We went on Saturday morning, got on a surprisingly on-time flight, and about two and a half hours later, found ourselves at Orlando International Airport. I texted my sister to see where they were, and my very wonderful niece responded that they were just passing the "Mickey tennis racquet" (the giant electrical pole shaped like large mouse ears, located near Celebration and the Walt Disney World entrance closest to Animal Kingdom that looks like a giant Mickey tennis racquet). That meant they were late, and that I had half an hour to kill. I then looked up, the clouds parted, the angels wept, and I spotted Magic of Disney, the relatively recently remodeled Disney merchandise location at the airport. Couldn't hurt to kill a little time in there, right?

Magic of Disney is located just past security in terminal B, though the airport is really one large building. What I found there wasn't a Disney Store, but rather, a fairly decent Walt Disney World shop that just happens to be located off property. 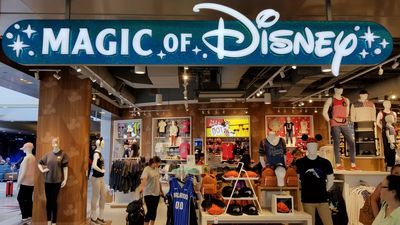 Magic of Disney is waiting for you just past security. Photo by Gregg Jacobs.

There are two reasons you'll find yourself in the shop. You're either just off the plane and like me, can't wait to dive in to the Disney magic, or you're on your way home and realize that you forgot to buy a gift for Aunt Bertha or the friend who took care of your dog. Either way, you should be covered here with a wide selection of merchandise.

The store has a big, airy feel, and the first thing that draws your eye on entering the store is the huge media wall at the back with rotating images of the Disney Parks. The Tree of Life lit up at night and a gleaming Spaceship Earth did a great job of putting me in the Disney mood. 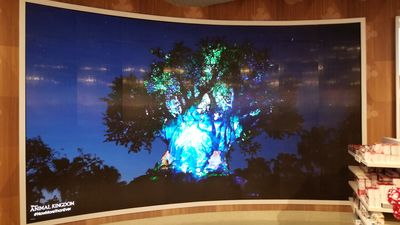 A huge media wall lures you in at the back of Magic of Disney. Photo by Gregg Jacobs.

As at most Disney merchandise locations, they have special set-ups of goods from properties that are currently in theaters or are new to the parks. On the day of my visit, they had large displays of items from The Lion King and Toy Story 4. These included kids' costumes (helpful if you're on your way in and need something for Mickey's Not So Scary Halloween Party), clothing, and toys.

If you love Minnie Mouse, they had a special section just for her. Entitled, "It's all about the DOT," they had the plastic headbands with the Minnie bows on top and well as pink hats with mouse ears and a few clothing items with Minnie imagery, mostly in red and pink. I not sure if this was intentional or not, and if it was just me that found this funny, but the DOT in the title was in all caps, and my first thought on seeing it was that it stood for "Department of Transportation." We're at an airport. Get it? Anyway, moving on. 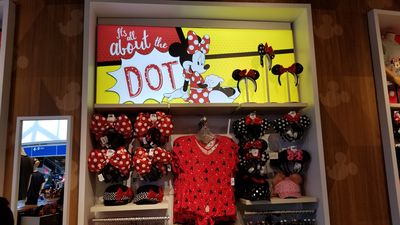 For Minnie Mouse, it's all about the "DOT". Photo by Gregg Jacobs.

While it lacked the massive assortment of an Emporium, they had a nice selection of T-shirts and sweatshirts. One of my favorite product lines of late is the clothing line that has retro WDW logos that throw back to the 1970s and 1980s. There are a bunch of T-shirts with these logos and I loved the sweatshirt, even at a steep $54,.95, in a bright yellow with a seemingly 3-D retro image. 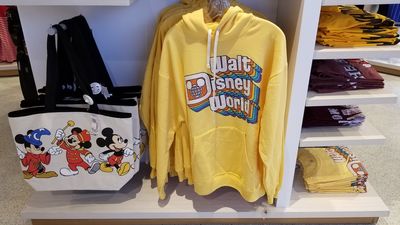 The Magic of Disney has a wide assortment of tees and sweats, including a big yellow retro sweatshirt. Photo by Gregg Jacobs.

There was also an area dedicated to sports. At the shop's entrance, there was a display of Orlando Magic merchandise. If you're a basketball fan, you can buy a Disney-free genuine Magic jersey, T-shirt, or hat. If you want a little Disney in your basketball wear, they also have basketball mouse ears, which are actually pretty funny. 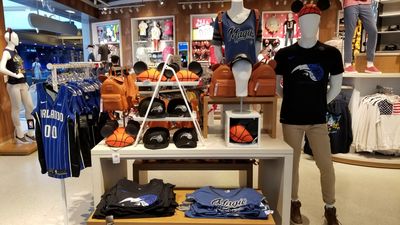 There was a display of Orlando Magic and basketball merchandise at the entrance. Photo by Gregg Jacobs.

For the golfer, they have Mickey golf balls for $9.99 per set and collared golf shirts with subtle Mickey Mouse logos. 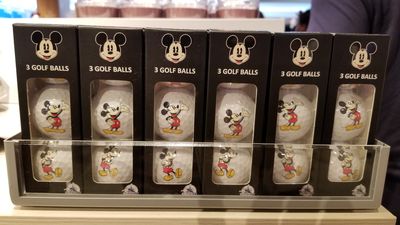 I've always been a big fan of the Mickey logo golf balls. Photo by Gregg Jacobs.

Beyond the items I've called out, Magic of Disney is a great place to buy basic souvenirs and gift items. There's a plush wall (two for $22 special the day I was there) and the usual assortment of mugs and key chains. If you want to get something small to get your child ready for their trip of a lifetime on your way to WDW or really do need that last-minute gift you forgot to buy for someone at home, you'll find it here. 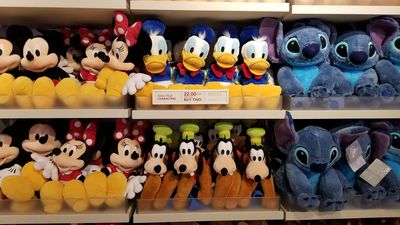 The shop has a large plush wall with all of your favorites. Photo by Gregg Jacobs.

One thing the shop didn't have a ton of, surprisingly, was travel items. There were a few, though. They had backpacks and a small assortment of luggage. They also had Mickey and Minnie sleeping face masks and for $9.99, an assortment of hand sanitizers in cute cases that featured Mickey, Minnie and Donald. There was also a rack with an assortment of Disney snacks for your trip home (or bus/car ride to the park), including chips and cookies featuring Disney characters. 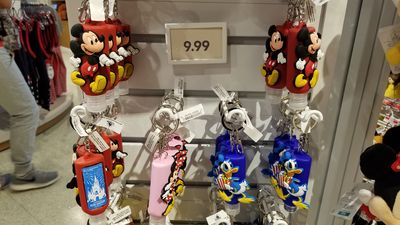 You can buy Disney hand sanitizers for the plane. Photo by Gregg Jacobs.

Discounts apply when shopping here is that all Walt Disney World, including the 20% you get off merchandise as an annual passholder, the Disney Vacation Club discounts and Disney Visa discounts. I confirmed this with a cast member, so make sure you take advantage.

Alas, after my brief stroll around, shopping time was over and my niece called to say they were nearing the airport, so we set a place from them to pick us up. You may be asking why we didn't just go to Walt Disney World since we wound up in Orlando anyway. Well, my sister's family has Florida resident annual passes, which are blocked out in the summer (not to mention the stifling heat). Our platinum passes would have worked, but asking our 4-year-old nephew to wait in the hot car while we played in the Magic Kingdom just didn't seem like the right thing to do.

What we did do though, is take advantage of being in Orlando without Disney passes. When in town, we always go to WDW, so we thought we'd do something there we'd never done before, so we went to ICON Park off International Drive. I won't get into too much detail here, but it's a dining-shopping complex with a bunch of attractions including: Madam Tussauds Wax Museum, the Wheel at Icon Park, a huge ferris wheel, the Sea Life Orlando Aquarium, and the Museum of Osteology, a skeleton museum, which we visited.

Our little nephew has been a bit skeleton-obsessed lately, so we thought he'd get a kick out of it, and he did. They boast 500 different real animal skeleton (with the disclaimer that no animal was harmed) and it was kind of a cool walk-through with a fun gift shop

We also went to The Sugar Factory and had a huge lunch. It's a limited chain restaurant with gigantic desserts, as the name would imply. The thing they're best known for is giant milkshakes, and we got a couple of those, including the Banana Nutella Milkshake, which tastes just like it sounds and has globs of chocolate rolling down the side of the glass. 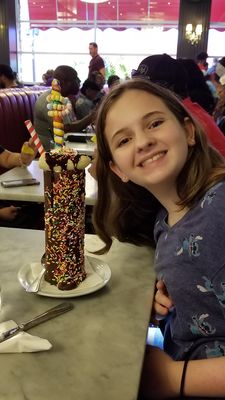 The Sugar Factory is known for its gigantic milkshakes. Photo by Gregg Jacobs.

If you do want to venture off Disney property while in Orlando and don't want to drop a ton of money on another theme park, check out ICON Park and the Sugar Factory for an afternoon or evening out. You'll have a good time and eat well.

So the lessons for today are that you can shop at the airport, and there is life in Orlando beyond the Mouse dome. Thanks for reading and see you next time.