Disney traditions can be any number of things, and we as Disney fans each have our own. These could involve visiting certain parks on certain special days. It can be hanging that MIckey Mouse ornament on your tree every holiday season. It can as simple as having your coffee out of that favorite Donald Duck ceramic mug every morning.

Being the Disney fanatic I am, my family and I have tons of these traditions. There are certain restaurants we hit on every Walt Disney World trip (see you in November, Crystal Palace). I have three nieces and two nephews, and each of them has gotten a stuffed Mickey Mouse or Minnie Mouse from Uncle Gregg on the day they were born (OK, second niece got a stuffed Tigger because I sensed she was an animal lover—I was right—she's now 14 and has a job after school grooming horses). There are also traditions of the shopping variety that involve buying a new T-shirt, mug, or figurine on each trip.

Jim Shore is someone else who believes in traditions, and along those lines, has created the Disney Traditions line of statues and figurines. This collection features depictions of characters and scenes from all corners of the Disney universe. Within these pieces, you can find anything to match your Disney interest or budget. The pieces run from small to large, from around $20 to hundreds and have subjects from the Fab 5 to Stitch to Pirates of the Caribbean.

Taking a look at the artist, Jim is from from rural South Carolina and credits his family and grandmother, the quilter, for fostering his interest in art. He honed his craft over the years with a particular love of folk art.  His current business began in 2001, when he partnered with Enesco, the worldwide gift company that owns brands like Department 56.  His website says of his work, "Jim's unmistakable style combines a diverse color palette with timeless design drawn from images of American and European folk-art forms".

The pieces in this series combine the world of Disney and it's iconic characters with the artist's love of folk art. The results are beautiful images of which you'll want to take a closer look.

The statues in the series are made of stone resin—a combination of acrylic resin, bauxite, epoxy, marble dust, and pigments. Essentially, stone resin is an acrylic material that is molded and painted to resemble and feel like stone (personally, it has more of a hand carved wood feel to me). It's extremely durable and can be finished however you'd like.

The pictures I'm going to share today aren't from a Disney Park or fine arts showroom, but rather from the American Greetings store at Menlo Park Mall in Menlo Park, New Jersey. Disney is everywhere! I was strolling through the mall and caught sight of the window, which was full of these creations. 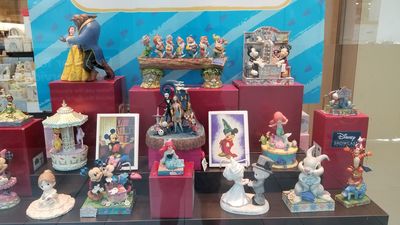 The display window at American Greetings is full of Disney and Jim Shore. Photo by Gregg Jacobs.

As I said, the collection contains pieces both large and small. The first to catch my eye was a largish depiction of Snow White and the Seven Dwarfs. It has all seven dwarfs happily on their way to work (except maybe Grumpy who didn't look so happy). 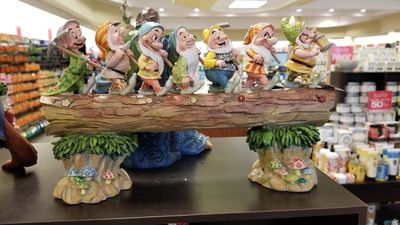 The seven dwarfs happily march off to work (except for Grumpy). Photo by Gregg Jacobs.

The piece is actually very intricate. The dwarfs are carrying lanterns and pick axes, and are walking along a log in the forest. There are flowers, grass and mushrooms, and each dwarf has a different expression on his face. If you look closely, you also see that that the finish isn't quite even. There are some lines that aren't straight and some ripples on the surface to make it look like it was hand carved. This is a hallmark of all Jim Shore's work.

This particular piece is somewhat large, at 8 inches tall and 13 inches long. It retails for $129.95, though there's also a musical version for $395.95 that plays "Heigh Ho" when you touch it.

Sticking with the Disney animated classics, if you're a Beauty and the Beast fan, you'll love the classic depiction of Belle and the Beast dancing as they look lovingly at each other. This figure, which has the same hand-carved feel, conjures images of the ballroom scene (I can still see the swooping shot of the chandelier in my mind). Entitled "Moonlight Waltz," this one goes for $99.95. 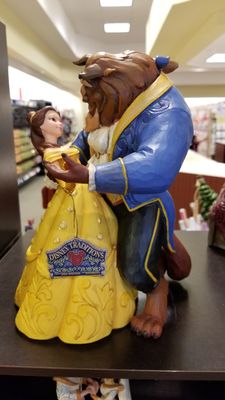 Belle and the Beast appear together in Moonlight Waltz. Photo by Gregg Jacobs.

As the Disney Parks have recently kicked off the Halloween season, we go next to another classic, The Nightmare Before Christmas. Proving that you can find merchandise outside the realm of the romantic classics, this figurine has a proud Jack and Sally towering over the cast of the Tim Burton stop-motion film. This one is 8 inches tall and retails for $99.95. 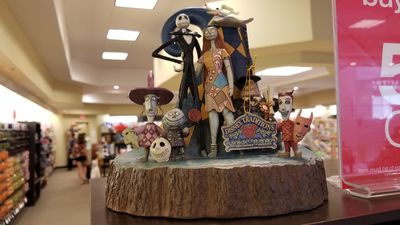 Jim Shore depicts the whole gang from "The Nightmare Before Christmas". Photo by Gregg Jacobs.

Next up, the series also includes characters that aren't necessarily the stars of their respective movies. I'm sure there are many Winnie the Pooh fans out there. While I love Winnie and Tigger, my personal favorite from those films has always been Eeyore. In "heart on a string," Eeyore gets his own sculpture. Here, he's depicted with a sheepish look and a string bearing a heart hanging from his mouth. He's looking for love in what would be a great Valentine's gift. This one is $25.95. 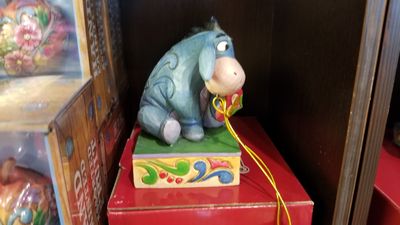 Eeyore has his heart on a string. Photo by Gregg Jacobs.

Swinging back to the big cheese, Mickey Mouse is of course represented in the collection. There have been increasingly varied goods produced for Mickey's 90th birthday in 2018-2019,. so of course there's needs to be a Disney Traditions sculpture in his honor. Mickey, the true original, is shown in both black and white and color. We see him how he was originally created by Walt Disney and how he exists today. He's seated at a makeup mirror, looking at himself, with various hats and props from over the years cleverly included. "The True Original" goes for $124.95. 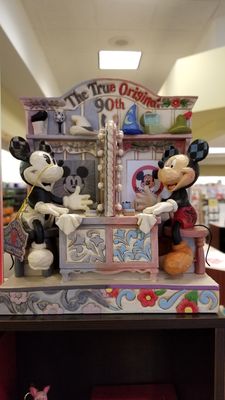 Mickey Mouse has been a true original for many years. Photo by Gregg Jacobs.

There are other types of items in the Disney Traditions collection as well. First and foremost among these are snow globes. While they include designs depicting winter and holiday scenes, one of them celebrates the bride and groom. Entitled "Happily Ever After," we see Mickey the groom carrying Minnie the bride on their wedding day (are they actually married? Your thoughts are welcome). The snow globe goes for $59.95. 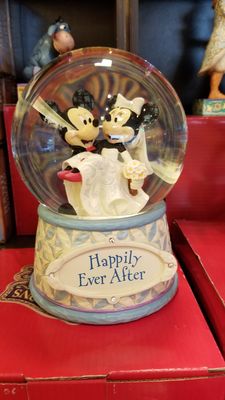 Mickey and Minnie got married—or did they?. Photo by Gregg Jacobs.

These are just a few examples of dozens of different figures, sculptures, and figurines that are available as part of the Disney Traditions collection. If you look further, you'll find Disney villains, more characters from animated classics new and old, images we love from the theme parks (Figment, anyone?) and the Fab 5 doing all kinds of crazy things. If you collect Disney figurines in general or focus on a particular character or movie, you're likely to find something to like here.

The collection is available at Walt Disney World, mostly in the Art of Disney stores at Epcot, on Main Street USA in the Magic Kingdom, and at the Disney Springs Marketplace. They'e also been spotted at the Emporium and World of Disney at Disneyland.  They're also available at shopdisney.com and as I mentioned earlier, local Hallmark and American Greetings stores.

If you love Jim's work, I also recommend you check out his website. He doesn't only do Disney. He collaborates with other brands and characters as well like Coca-Cola, Peanuts, and the Grinch. He also travels and does signings, including some at the Disney parks, so you may get a chance to meet him in person. His schedule is on the website.

We have two figurines from the collection in our home. The first depicts Santa Mickey patting reindeer Pluto on the head. We have two dogs, so this represents the holidays perfectly for us, and it comes out every holiday season when we decorate the house. The second was a wonderful gift from my mom and dad-in law. Picture Mickey and Minnie as the farmers from the famous painting, American Gothic. They're standing in front of a old farmhouse.  The one sits out proudly all year-round, and symbolizes love and family to us. It's also a great example of the folksy traditions that Jim Shore sought out to create.

That does it for this month. Thanks for reading, and see you real soon.