I'm less than 30 days away from my return to Walt Disney World. While I'm beside myself excited to visit Galaxy's Edge and finally sit in the cockpit of the Millennium Falcon, something I've dreamed about since I was nine, I'm equally excited to just be back there revisiting all of my favorite spots. Don't get me wrong, I anticipate trying to spend a whole bunch of time in Batuu over at Disney's Hollywood Studios, but, as always, the Disney classics have a soft spot in my heart. We've been counting down my favorite things from the Magic Kingdom attractions and there are still plenty left to talk about. A big chunk of those favorite attractions are classic dark rides, something that Disney essentially pioneered and perfected over the last 50 years. Today we'll take a closer look at one of the newer generation ;dark rides, Under the Sea - Journey of the Little Mermaid.

The Disney classic animated film from 1989 has long been heralded as kicking off the Disney Renaissance. After several disappointments in both their live action and animated films, Disney was in need of a big hit. Turning Hans Christian Andersen's fairy tale, The Little Mermaid, into an animated film had been under consideration by Walt Disney himself as far back as the 1930s. The idea and some concept art sat dormant for 50 years and was dusted off in the 1980s and the rest, as they say, is history. Ariel's tale was a huge success and kicked off a rebirth of the company's animation wing, which included a second wave of Disney animated classics like Beauty and the Beast, Aladdin, The Lion King, and Pocahontas.

The Little Mermaid was always a big favorite of mine. I'll never forget popping in the 2006 Platinum Edition DVD, checking the special features section and discovering a computer generated ride through of a never built Little Mermaid attraction for the Disney parks. I couldn't fathom why, 16 years after the film's release, this ride hadn't made it into the Magic Kingdom or Disneyland. Ariel was always one of their biggest stars and I'm a total sucker for the Voyage of the Little Mermaid over at Disney's Hollywood Studios. It just seemed like a no brainer to me. Three years later, I was thrilled to hear that the Little Mermaid ride would finally be arriving in the Magic Kingdom as part of the Fantasyland expansion. In December 2012, Under the Sea - Journey of the Little Mermaid opened at Walt Disney World and soon became a staple of our family's visits to the most magical place on Earth. Why is it one of our favorites? Let's take a closer look with my Top 5 things to love about Under the Sea - Journey of the Little Mermaid.

Way back in my Muppet days at the New York City studio, one of my favorite things to do was to hang out with the prop guys. I even spent an afternoon shopping with one of the art directors for all sorts of Muppet stuff. What a good time we had looking for little bits and pieces of junk that we thought the Muppets would have in their studio. Someone from Walt Disney Imagineering had an equally fun time searching for Ariel's "gadgets and gizmos" and "thingamabobs" that ended up strewn throughout the queue and inside the attraction in the "Part of Your World" room. 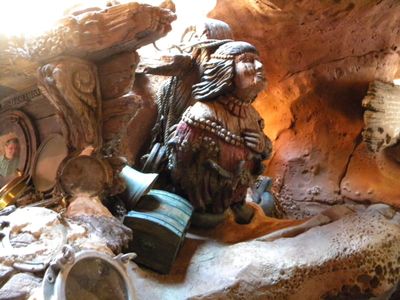 As you enter the inside section of the queue, you begin to see parts of Ariel's collection of objects from the human world. Photo by J. Jeff Kober.

As you all probably know, in the film, Ariel was a collector of all sorts of stuff from the human world. These "whozits and whatzits" are what fascinate her about the world above the sea and fuel her desire to be part of our world. I've always thought that being in charge of props at Walt Disney World would be an awesome job. Whoever was in charge of the props for Under the Sea really outdid themselves. There's so many trinkets and treasures to look for. It adds to the storytelling and completes the atmosphere of the attraction.

One of the things that hooked me on the classic film, aside from the beautiful animation, was Alan Menken and Howard Ashman's incredible soundtrack. I'm admittedly not a big fan of Broadway musicals, but the decision by the film's creators to feature multiple songs as key moments of the film, much like a Broadway musical, was a stroke of genius and ushered in a wave of Disney songs used as storytelling elements that exists to this day. 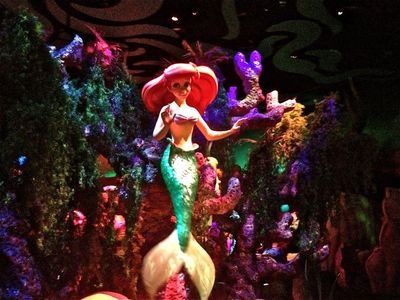 Ariel dances to "Under the Sea" in one of the biggest rooms of the attraction named after her signature song. Photo by J. Jeff Kober.

It's hard not to like The Little Mermaid's big tunes, "Part of Your World," "Kiss the Girl," "Under the Sea" and "Poor Unfortunate Souls." You want to hear them as you head into the attraction and you are not disappointed.

What would any Disney animated classic be without a proper villain? Ursula is one of the best of her kind. Brilliantly voiced by television actress and cartoon voice-over artist Pat Carroll, Ursula was an unforgettable character in The Little Mermaid. She is funny, downright sinister, and has one of the best songs on the soundtrack. She, of course, had to be an instrumental feature of the attraction and her animatronic is one of Disney's biggest and best. 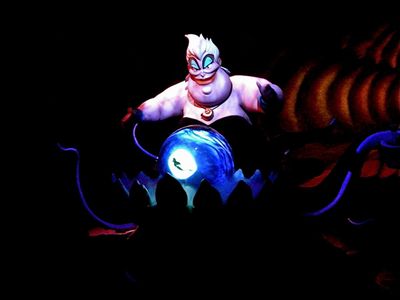 The huge Ursula animatronic menaces guests as they pass her in Under the Sea - Journey of the Little Mermaid. Photo by J. Jeff Kober.

My daughter was 15 by the time the attraction opened in Walt Disney World, so she was never afraid, but my good friend Alex's daughter Lia was a little girl on her first ride; she was fairly terrified as they entered Ursula's room on her first ride, so I guess the Imagineers did their job with this one.

This is my favorite The Little Mermaid song and one of my favorite scenes in the film. To me, this is the very heart of the attraction. Sure, the Under the Sea room is bigger and more bombastic, and "Part of Your World" is probably the signature song, but this room is my favorite. 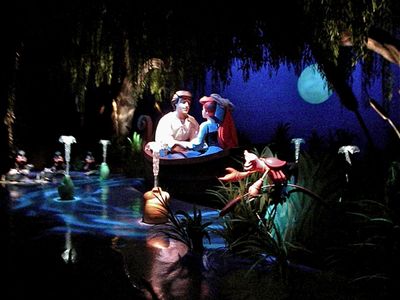 As you leave Ursula behind the mood changes and lightens as you begin to hear the strains of "Kiss the Girl." Photo by J. Jeff Kober.

I love the projection technology on Sebastian's face. I think the movements of the Eric and Ariel animatronics are so subtle and perfect for the delicate moment they're portraying from the film. The mood is great. The music is wonderful. I'm not sure if everyone may agree, but to me, it's the subtlety of this moment in the ride that strikes a certain chord with me and always remains my favorite moment.

The Imagineers knocked it out of the park when they were designing and building the queue for Under the Sea, especially the section that's outside. It's a total immersive moment when you walk into the entrance, see Eric's castle, pass under the brick archways and cross the bridge over the small lagoon. You hear the waterfalls and meander your way through the incredible rockwork that surrounds you. 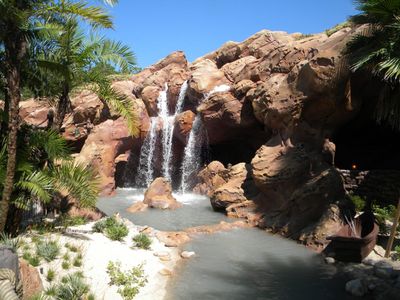 The incredible Under the Sea-Journey of the Little Mermaid queue features this beautiful lagoon and waterfall. Photo by J. Jeff Kober.

This is truly one of the best examples of Disney's physical artistry at work. The small details are everywhere. Once you get inside and are greeted by Scuttle, you realize that the rocks and walls around you are covered and embedded with all of Ariel's "thingamabobs." You've left Fantasyland behind and you're in Ariel's world now. It's pretty amazing.

I've read a lot of comments online from people that are always a little underwhelmed when they visit Under the Sea for the first time. Everyone's entitled to their opinion, but I'd have to respectfully disagree with that point of view. I think you need to take the attraction for what it is, a classic Disney dark ride much like one of my other all time favorites, Peter Pan's Flight. It's certainly not the most high tech ride out there, but there's a simplicity about it that draws me in.

I'm a big fan of Disney animatronics and this one is chock full of them. Most of them are pretty simple. But that's what they're supposed to be. They represent the classic hand drawn animation from the film perfectly. The Little Mermaid was the last Disney film to be completely hand drawn and the attraction mirrors that beautiful classic style of animation much the same way that Peter Pan's Flight, The Many Adventures of Winnie the Pooh, and the long lost Snow White's Scary Adventures did. I think it fits into the grand Disney tradition of creating immersive dark rides perfectly.

My daughter Samantha was 15 when Under the Sea opened in 2012 and she loves if for the same reasons I do. However, I guarantee you that if little four-year-old Sammy in her Ariel dress was able to experience this attraction way back when, it would've been a huge ride for her. There's no doubt in my mind that Under the Sea has been winning over a generation of little girls' hearts ever since it opened and will continue to do so for a long time to come.

By the way, one of the reasons I decided to specifically cover The Little Mermaid today is because this very weekend, the animated classic returns to theaters for a limited engagement as part of the Dream Big Princess series. The Little Mermaid runs from September 6 through September 12 in select theaters. If you haven't seen this beautifully animated film on a big screen, now's your chance. I know I'm not passing up this opportunity.

That's all for this Top 5. As always, I'd like to hear your thoughts. Click on the link below , let me hear what you have to say about Under the Sea - Journey of The Little Mermaid and I'll see you next time with another Disney Top 5.