We've been inspired by the countries along Epcot's World Showcase since our first visit here in Florida, many decades ago. We could even say that part of the reason we like traveling as much as we do is because of our exposure to the new experiences, cultures, and variety World Showcase offers. When it comes to the China pavilion, we certainly know that it isn't really China, but we also know that it offers an insight into some of the things we might find if we traveled to the country.

Take a look as we show off some of the things we found as we made our way through the China pavilion in Epcot's World Showcase. 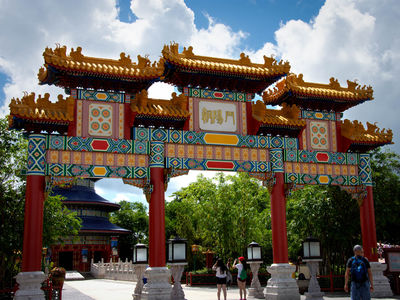 Gate of the Golden Sun, or the Zhao Yan Men, is found at the entrance to Epcot's China pavilion. The original Gate of the Golden Sun is found at the Summer Palace, located nine miles north of central Beijing. The Summer Palace was built around 1750. Covering about 1.8 square miles, it was originally designed to offer a place for royalty to get away from everyday life and provide a place to entertain in lavish style. Today, it's open to the public and has become a popular tourist attraction. Photo by Donald Fink. 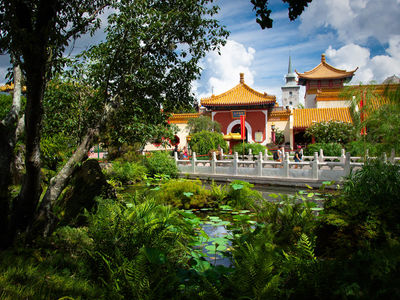 There are spots within the China pavilion that offer quiet and seclusion. Here, the path to the right of the Gate of the Golden Sun offers some tranquility as you view the garden and pond. The gardens at the China pavilion were inspired by the Suzhou Gardens in Jaingsu Province, China. The Suzhou gardens date back over 1,000 years and are currently a UNESCO World Heritage Site. Photo by Bonnie Fink.

Here are a few more images we put together into a video that helps illustrate our view of the China pavilion. Photos and Videos by Donald and Bonnie Fink. 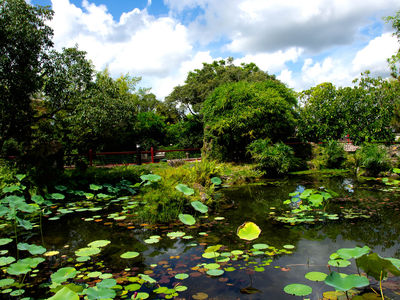 Lilies are the water plants you see here floating on the water's surface. Lotus plants are the leaves that are raised above the surface. On the day we made this image, there were no lotus blossoms to be seen, but a couple of plants appeared to be very close. We understand that the best time to see these flowers blooming is in the early morning, which would be after 11:00 a.m. in World Showcase, based on when it opens. Photo by Bonnie Fink. 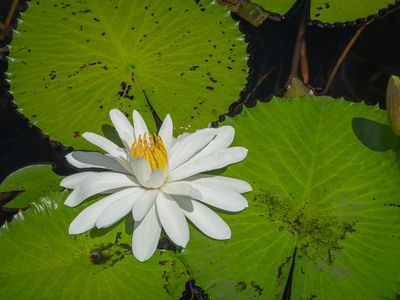 It's not hard to find something blooming in the water garden at Epcot's China Pavilion. For the most part, you'll find various water lilies and lotus blossoms. We believe this flower is an American white water lily, or Nymphaea odorata. Photo by Donald Fink. 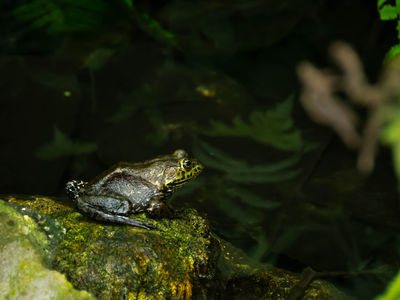 Is this frog part of the planned ecosystem of the pond at Epcot's China pavilion? Probably not, but seeing one—and the tadpoles that swim in the water—certainly seems to add to the enjoyment of the garden. Photo by Donald Fink. 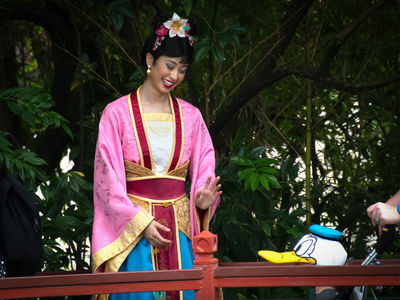 You can find Mulan in the China pavilion if you want a picture. "Mulan" was a 1998 animated movie about a young Chinese girl who entered the Chinese Army when the Emperor of China decreed that one man from each family enter the army to fight against the Huns. Mulan's father—the only man in the family—was elderly and of failing health, so she disguised herself as a man and took his place. This animated movie has a live action remake in the works, scheduled for release early in 2020. Photo by Donald Fink. 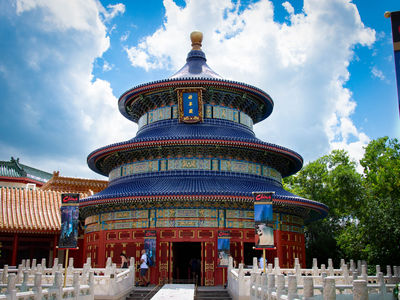 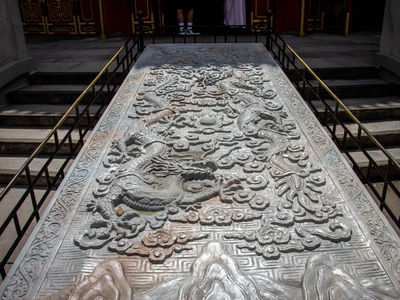 This marble looking slab is most likely inspired from one of the marble slabs outside of the Temple of Heaven in Beijing, China. The original was a single slab of marble depicting five-clawed dragons, the hallmark of the Emperor. Dragons in Chinese culture aren't viewed the same as they are in mythical western lore. Instead of being ferocious, fire breathing, and a general menace to society, they are often playful and friendly toward humans. Dragons were often thought to control the rain; a commodity that was very important in a culture centered around farming. Photo by Bonnie Fink. 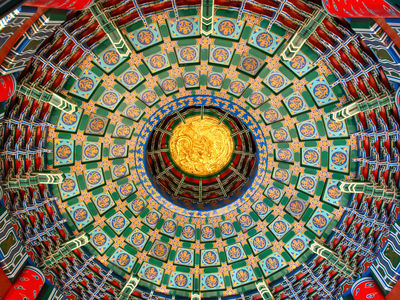 In the ceiling of the Hall of Prayers for Good Harvest is a golden dragon, with a golden phoenix. The dragon represents power and the phoenix represents peace and prosperity. Together, they represent marriage. Photo by Bonnie Fink. 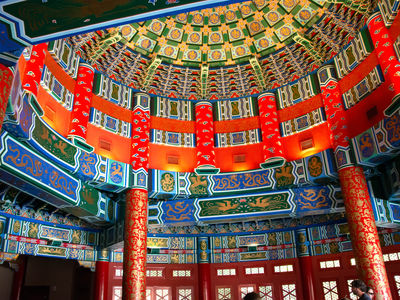 There are twelve columns supporting the domed ceiling in the Hall of Prayer for Good Harvest. The number twelve here represents the twelve months of the year, and the twelve-year cycle of the Chinese Zodiac. According to the Chinese Zodiac, this year is the year of the Pig. Supporting the twelve columns is another layer of four columns representing the four seasons of the year. Photo by Bonnie Fink. 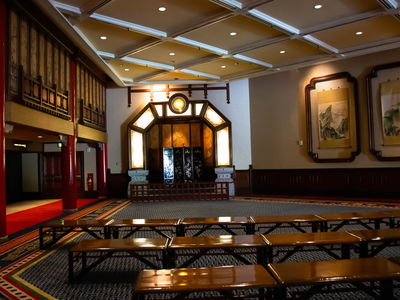 Beyond the domed ceiling inside the Hall of Prayer is the waiting area for the movie, Reflections of China. This Circle-Vision 360 degree movie opened in May, 2003, replacing the original movie, The Wonders of China, which was operating from 1982 until being replaced. Photo by Bonnie Fink.

On August 25, 2019, Disney Parks, Experiences, and Products Chairman, Bob Chapek announced at the D23 Expo that the China pavilion would be seeing a new movie called Wondrous China. It will be presented in what he called “Completely seamless 360-degree digital format.” He did not mention if the movie was going to premiere in 2020, but the new Canada movie will premiere in January of 2020, as well as the new Beauty and the Beast Sing-Along, in France. 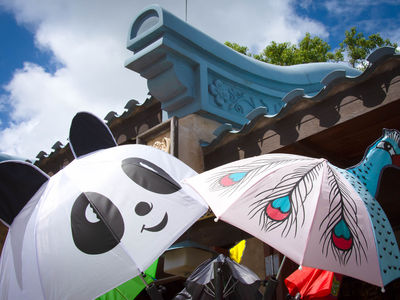 In case you think the gift items in China are all about traditional Chinese merchandise, you can find some interesting and playful items as well. These fun looking umbrellas will tell everyone you've been to China. Photo by Bonnie Fink. 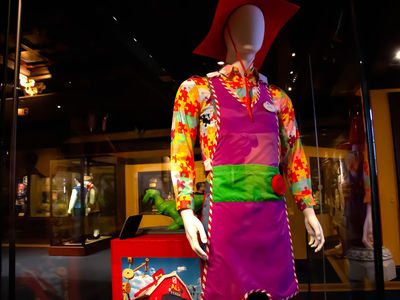 The building next to the Hall of Prayer for Good Harvests is the House of Whispering Willows. In years past, this building contained a scaled replica of the famous Terracotta Army. Today, you'll find a display representing Shanghai Disneyland. Shown here is a typical cast member costume from Toy Story Land. Photo by Bonnie Fink. 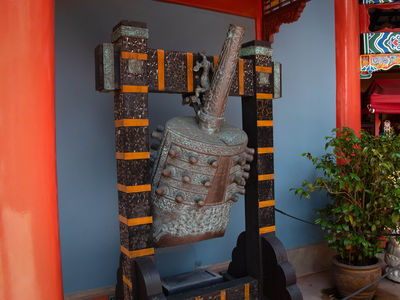 This is a Zhong Bell. It is believed that these instruments were in use in China between 3,500 and 2,000 years ago. They're usually found in groups of odd numbered sets. The Zhong bell does not have a clapper inside, but instead is played by striking it with a mallet from the outside. In 1957, a group of Chinese musicians found that each bell could play two notes, depending on where the bell was struck. Photo by Donald Fink. 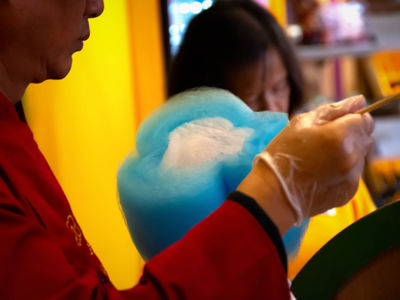 Cotton candy as art has apparently become somewhat popular in China. Not long ago, Cotton candy in the form of a lotus blossom was introduced at the International Flower and Garden Festival. Since then, the artists making these culinary treats have moved inside to the House of Good Fortune, so you can enjoy a Lotus Blossom Cotton Candy pretty much any time. Photo by Bonnie Fink. 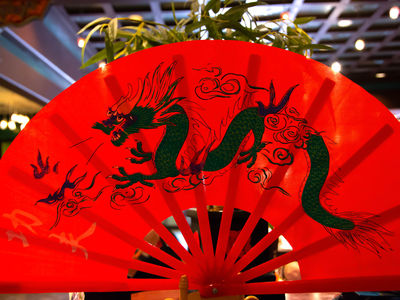 Dragons are a recurring theme in traditional Chinese lore and art. They are thought to have control over water, rainfall, typhoons, and floods. They are also a symbol of power, strength, and good luck for people who are worthy. Notice that this dragon has only four claws, in keeping with the tradition that five-claw dragons are reserved only for the Emperor. Photo by Bonnie Fink. 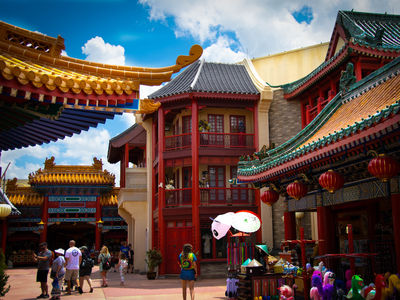 The main street at Epcot's China Pavilion is called the Street of Good Fortune. If you spend a bit of time looking over the architecture, you can find examples of building from much of China's history. Photo by Donald Fink. 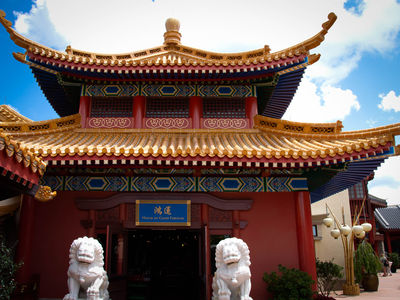 The king of all animals according to Chinese lore is the lion. Lions, also called foo dogs, are believed to have mystic and protective powers. They represent prestige and power and are often placed in front of gates and doorways. Photo by Bonnie Fink. 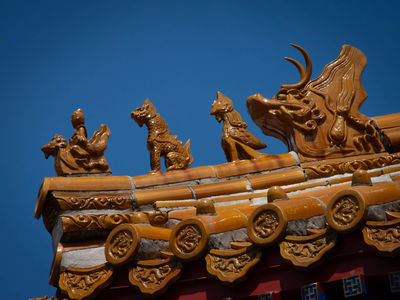 There's a story in China about a particularly brutal leader called Prince Min, who was hanged from the rafters of his palace for crimes against his people. Since then, many buildings in China have decorations along the roofs depicting Prince Min riding a chicken. The animals shown behind him are there to prevent his escape. The number of animals behind the prince are an indication of the building's importance. Photo by Bonnie Fink. 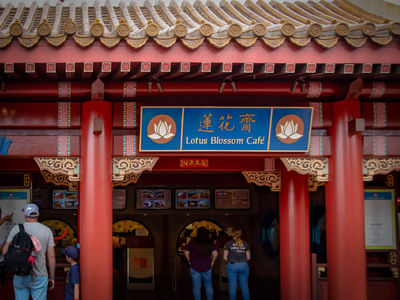 The quick service restaurant in China is called the Lotus Blossom Cafe. It's a typical quick service facility in many ways, with the obvious Chinese inspired foods. There's a covered, open air seating area to the left that offers a bit of shade and an opportunity to people watch as you enjoy your lunch. Photo by Bonnie Fink. 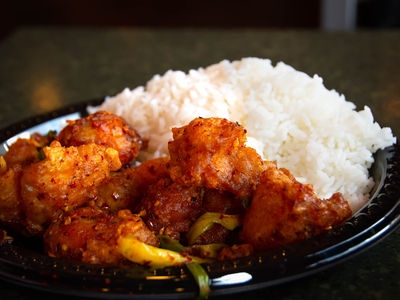 At the Lotus Blossom Cafe, we tried a bit of Sichuan spicy chicken. This dish came with chicken nuggets covered in various peppers and spices. The rice was plain and needed some fixing from the condiments bar. If spicy and hot is your thing, you might like this dish. If not, you might want to try something a little milder. Photo by Bonnie Fink. 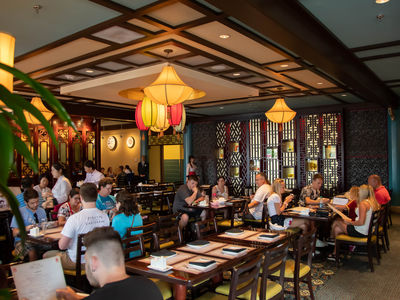 We didn't try the Nine Dragons Restaurant, but it's the table service restaurant in the China pavilion. With just a quick walk through, we found it to be pleasant, with helpful staff, which is about all we can say since we didn't sample the food. By the way, the number nine is significant in popular Chinese culture. It represents luck and good fortune. It's rumored that a local citizen of Hong Kong once paid 1.7 million dollars US for a license plate depicting the number nine. Photo by Donald Fink. 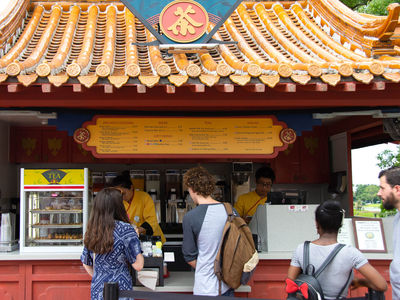 Just opposite the main entrance to China is a small kiosk called Joy of Tea. As you might imagine, you can get a variety of teas and other drinks, and a few snacks. Photo by Bonnie Fink. 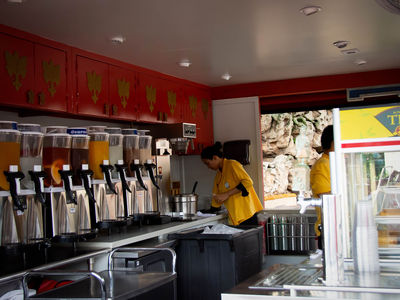 We counted five different teas on the menu at Joy of Tea. In addition, there were six cocktails and two beers, both from China. There are also various snacks if you want to try a bit of China, but don't want to go all in for a restaurant or quick service meal. Photo by Bonnie Fink. 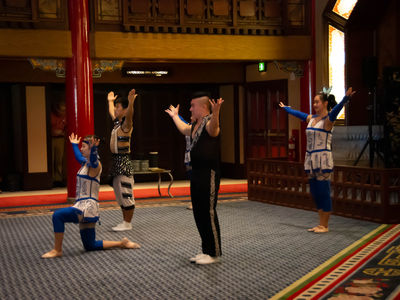 There's an acrobatic group that performs at China most days. They are usually near the front of the China pavilion, just inside the Gate of the Golden Sun. On the day we were here, they did their show inside the Hall of Prayer because of the heat outside. Check a Times guide when you visit to see if they're performing on the day you visit. Photo by Bonnie Fink.

When Disney puts something on display, you can be assured that it's well thought out. If it's a fantasy, it's rich in back story. If it depicts something real, like the China pavilion, it's full of the culture, tradition, and lore of the people that make up this very old country.

We enjoyed our visits to China from a cultural point of view, and from an entertainment perspective, learning and seeing far more than we could ever present in a brief Photo Tour of the land. It's our hope that, next time you're visiting Epcot, you spend at least a little time exploring some of this pavilion for yourself.