The Art of Disneybounding

Disneyland Resort is in full spook-tacular mode currently for Halloween Time. Every year guests ask if costumes are OK to wear inside Disneyland Park and Disney California Adventure Park. The Resort has strict guidelines stating that anyone over the age of 13 is not eligible to wear full-on costumes—save it for younger guests or for Oogie Boogie Bash. No need to worry though. You can still channel your favorite character throughout the year by Disneybounding.

Not quite a full-on cosplay (costume role-play) Disneybounding is emulating the passion (or obsession) you may have for a certain Disney-themed character by using fashion–clothes and accessories mostly–in a subtle manner. Disney fan Leslie Kay came up with the idea a few years ago while prepping for a trip to Walt Disney World Resort. She wanted to display her love for Disney, so she created an ensemble pallette portraying a favorite character. After a few posts on her then-travel site…Disneybounding was born. Today, Leslie manages the Disneybounding account on Instagram. Be sure to check it out for hundreds of inspirational Disneybounding ideas.

It's not hard to Disneybound. In fact, many guests find it a creative outlet and ask others to join in the process. Most characters have their own hue connection which automatically triggers an image of that character. Red with white-polka-dots? Minnie Mouse. Gold with red? Winnie-the-Pooh. Purple top, green bottom? Everyone's favorite mermaid—Ariel. Just start from the top and work down. For example, Mickey Mouse's color scheme is black (top), red (shorts) and yellow (shoes). Mickey fans have created dozens of ensembles with these colors intact—a black t-shirt, red pants, and bright yellow sneakers. Or pair a red dress with a black sweater, black tights, and yellow flats accessorized with red/black sunglasses, capped with the classic mouse ears. The possibilities are limitless. 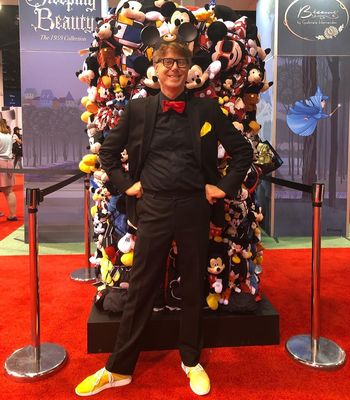 You don't need a lot of money to Disneybound. Peek in your closet for inspiration and go from there. And use the same color scheme for different characters. Yellow is most associated with Belle, but can also be a base for Simba or even Tarzan's Jane. Thrift stores and vintage boutiques are great places to purchase accessories or even base colors on which to build your ensemble. Pins, necklaces, hats, purses, and socks can complete your character inspiration. If flyboy Peter Pan is your character of choice, add a sword pin or red feather earrings to complete the look. These little additions add just the right amount of pixie dust to the whole Disneybounding idea.

WHO OR WHAT TO DISNEYBOUND

Everyone has their own personal favorite Disney character, movie, or even park attraction—all which can be inspiration for Disneybounding. Mickey and Minnie are the most common, but fans are extending their creativity and showcasing characters from every Disney branch, including some old favorites. With almost 60 (!) animated classics in the Disney vaults–from Snow White and the Seven Dwarfs to Moana–there are hundreds of characters to lend Disneybounding influence (not to mention all the live-action characters, like Mary Poppins). And you can switch up each character—there's no right or wrong way to Disneybound. 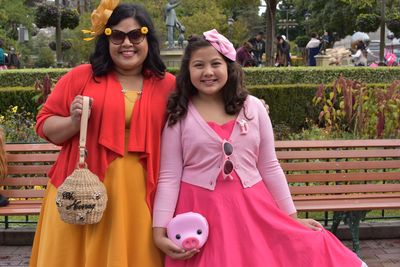 Lynlee Beckett and her daughter Anabelle share their love of Winnie-the-Pooh and his best friend Piglet. Photo by Lisa Stiglic. 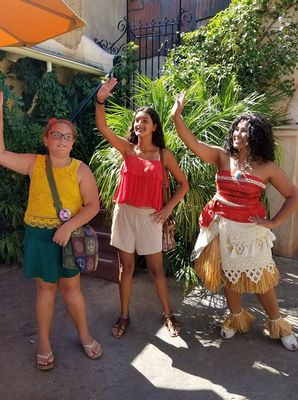 Sisters Lilianna and Kareena Elizarraras pose with Moana in their Hei Hei and Moana Disneybouding outfits. Photo used with permission by Brandie Davis.

Moving beyond the Disney classics, Pixar has 21 films in it's coffer, which means yet another grouping to inspire Disneybounding attire. Woody and Buzz and the Toy Story gang are extremely popular characters right now, due to summer's release of Toy Story 4. And, now that Disney owns Marvel and Star Wars, you can spot fans repping all super heroes from Captain American to Spiderman to Groot. The Star Wars universe has its own legion of followers as well. Rey, Yoda, and the original Nerfherder—Han Solo—are trending characters to channel. (With the newest acquisition of Fox, even Bart Simpson is now prime to Disneybound but just remember, no skateboards allowed in the Resort.) Even the Disney Channel and Disney XD have some great models for Disneybounding. Phineas and Ferb anyone?

And Disneybounding is not just limited to characters. Fans have displayed their love for Disney Parks' iconic foods and attractions. 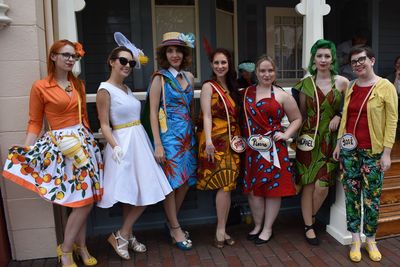 Personally, I'm not a full-fledged Disneybounder myself—I'm a bit of a fashion faux pas—so I tend to just wear a favorite Disney shirt topped with mouse ears or a backpack. But I can easily spend an afternoon at Disneyland Resort searching for guests who do Disneybound then try to guess which character they are modeling. My personal favorites are secondary characters who are still part of the Disney magic, albeit at a minimal level. 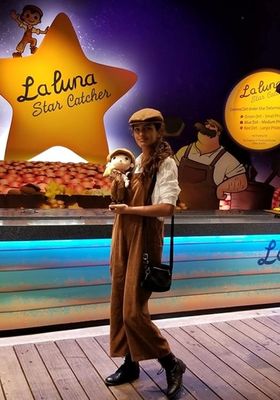 Disneybounding is not just limited to individuals. Grab a partner and channel a Disney duo—Mickey and Minnie, Belle and Beast, Judy Hopps and Nick Wilde—be creative! 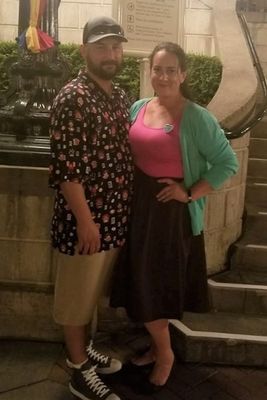 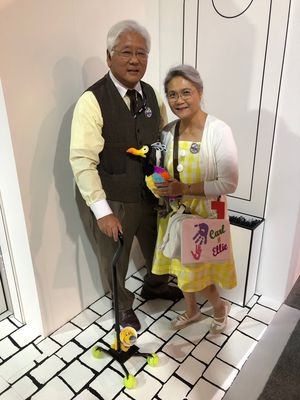 Steven and Millie Tan are familiar sights at Disneyland Resort with their Disneybounding characters. They channeled Carl and Ellie from Pixar's Up at this year's D23Expo. Photo by Todd Pickering.

If going as a group, play it safe with The Fab Five (Mickey, Minnie, Donald, Goofy, and Pluto) or the Winnie-the-Pooh cast. Or choose one of your favorite Disney/Pixar/Marvel/Star Wars movies and build from there. There are so many fun options. 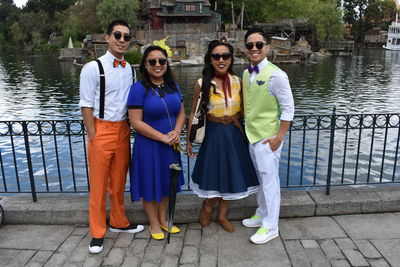 With such a vast repertoire filled with beloved characters, Disneybounding knows no bounds. Challenge yourself to to 'bound alone or with a friend to represent Disney's dynamic duos. Make it a group effort and showcase an entire movie. Have fun with it. I'll be looking for you!