In all the years of writing here on MousePlanet, going back about 11 years, I've never actually written an article while I'm in Walt Disney World, until now that is. Right now, I'm sitting in my room in the Alligator Bayou section of Disney's Port Orleans Riverside resort tapping away at the laptop. It's late. Stacy Aswad is on the television in an endless loop - it's the only thing allowed on TV while we're down here. My boys are asleep in their beds, conked out after another amazing but exhausting marathon day in the parks. We started off the day at Animal Kingdom on Kilimanjaro Safaris. Six hours later, we were headed out of Pandora. We took an afternoon break to swim at the Alligator Bayou quiet pool, and then headed over to Epcot's World Showcase for some delectable delights from the Food and Wine Festival. Our day ended, like every Disney day should, by watching the glorious IllumiNations: Reflections of Earth. The big difference was, this time, it was the last ever presentation of IllumiNations.

Now, I didn't plan to be down here for this momentous event. My indefatigable wife ran the Berlin Marathon this past weekend. I realized back when she signed up that she'd be gone for about a week, right around the time the boys and I would be off from school for a four-day weekend courtesy of the Jewish holiday of Rosh Hashanah. A trip to Germany wasn't feasible for all of us, so the obvious thing to do was to book a long weekend at Walt Disney World for me and my twin teenage boys. They happily obliged and we began the process of planning yet another Disney vacation. As fate would have it, the final IllumiNations was scheduled for this past Monday, September 30. I would coincidentally be there and be able to give it a proper goodbye.

The Epcot nighttime spectacular first ran on October 1, 1999 as part of Walt Disney World's celebration of the new millennium. Then named IllumiNations 2000: Reflections of Earth, the award winning show dazzled guests with music, fireworks, lasers, water fountains, lighting, flames, torches and, of course, the spinning, floating Earth globe. It was such a big hit that when the millennium celebration concluded, the show was kept in place and closed one day shy of it's 20 birthday.

Those of us who have been making Walt Disney World visits a significant part of our lives and, for that matter, even those who don't, have all been blown away by IllumiNations. It made an impact on us all. The show represented the spirit of Epcot. It was innovative. It was emotionally charged. It was sentimental. It was, for many of us, this writer included, the pinnacle of all that we love about Walt Disney World. In short, IlluminNations was one of those life affirming things and it was, quite possibly, in my humble opinion, one of the best 14 minutes of entertainment that Disney has ever produced. Why exactly? Let's take a closer look with my Top 5 Things I'll miss about IllumiNations: Reflections of Earth.

Something that was unique about IllumiNations was that it had its own pre-show music. World Showcase always has music playing as you stroll through the countries, but that all changed when the torches were lit and you would begin to hear the same music no matter where you went around the lagoon. If you were a regular visitor, you knew what that meant and it really did build up the anticipation to the big show. 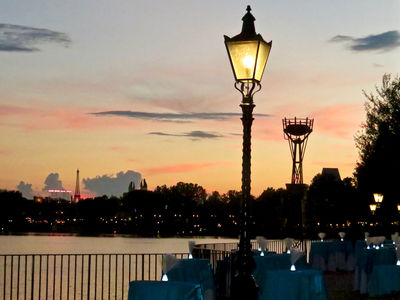 As the sun sets, the music begins to change and the entire lagoon begins to become one. Photo by Alan S. Dalinka.

The atmosphere in World Showcase is pretty hard to top, but this music unified all the nations, which was, of course, the whole point of the show; hearing it used to get me very excited that IllumiNations was beginning soon.

Only Disney could write a great song specifically for a fireworks show, one that actually sticks in your head and is something you want to hear and never get sick of. The lyrics to "We Go On" were written by Don Dorsey, producer and director of IllumiNations, and the musical accompaniment was composed by Gavin Greenway. 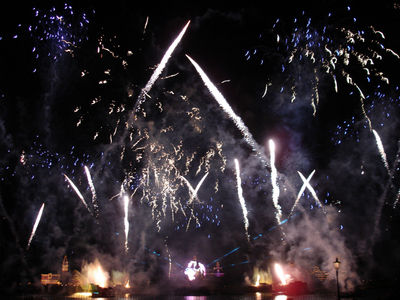 To me, it always walked the fine line between poignancy and over-sentimentality just perfectly. It wasn't cheesy. It's a beautiful piece of music that, I'm sure, has had an emotional impact on thousands of guests over the years and I'm certainly one of them.

As my sons and I meandered around World Showcase on our way back to Future World, we made sure to take our time. That has always been the golden IllumiNations rule: let the hordes leave and enjoy the calm and serenity a mostly empty World Showcase offers you at the end of the night. We saw the famed Earth Globe, IllumiNations' centerpiece, begin its final journey back to the shores of the lagoon and people were literally waving to it and saying, "Thank you!" 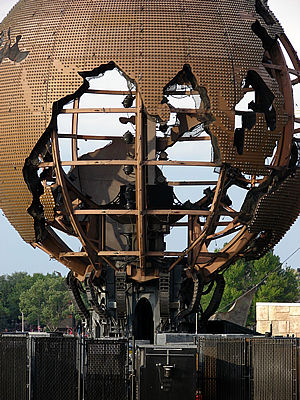 The iconic IllumiNations Earth Globe has long made its home along the shores of World Showcase. Photo by Mark Goldhaber

You have to love any inanimate object that causes people to treat it like an old friend. And what an object, the three-story tall globe is covered with 15,000 LED lights and was the world's first spherical video display system. It was a wonder of technology for its time. Actually, 20 years later, as was witnessed the other night, it's still a pretty impressive thing.

As anyone who's been there can tell you, a Disney fireworks show isn't like any other you'll find anywhere. It's never just about a big explosion and lots of color. It's more fine-tuned than that. It's hard to use the word subtle when discussing fireworks but, there are sublime moments in IllumiNations right alongside the big bombastic ones. 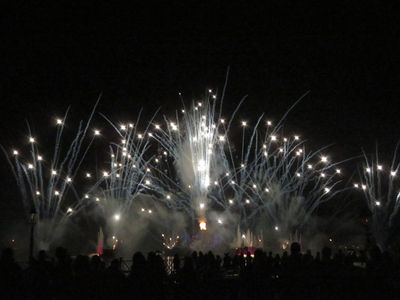 The finale of Epcot's Illuminations: Reflections of Earth lights up the promenade all around World Showcase Lagoon. Photo by Alan S. Dalinka.

Wishes always had and always will have a special place in my heart, but IllumiNations truly took you on an emotional roller coaster, expertly timed to the music, flames, lasers and spotlights. Your senses went wild and your emotions ran high. And remember, it's a fireworks show. Emotional storytelling doesn't typically find its way into a fireworks show, but that, as they say, is the Disney difference.

"We're gathered here tonight, around the fire—as people of all lands have gathered for thousands and thousands of years before us—to share the light and to share a story." 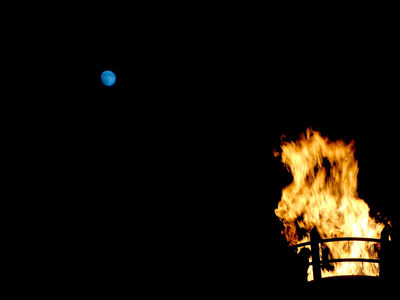 A nearly full moon hangs in the sky above one of Epcot's World Showcase Lagoon torches which are lit for nearly thirty minutes prior to the nightly presentation of Illuminations: Reflections of Earth. Photo by Alan S. Dalinka.

When they were all lit together, our unification is complete. When the torches are lit before the show; when they are "blown out" by that single breath; when they slowly turn back on again during the peak moments of the show; the intense heat they give off; these are all moments that will always be etched into my brain. My biggest hope is that they leave the torches around the lagoon and keep them lit for future shows. They deserve a permanent place in World Showcase.

The first time I saw IllumiNations, I was hooked. I couldn't believe how good it was, and how different it was. Ever since then, it's been a must do on every trip, frequently more than once. I watched it from a few different spots but Germany was the most consistent. My wife is first generation German American and was raised in a German centric household for sure. That always put us shopping in the German pavilion and then out to the water's edge to watch the show. For the final IllumiNations, I knew exactly where I'd be, especially with Diane actually in Bavaria at the time.

When we got to Epcot, you could tell right away that the place was packed. It seemed like everyone had come out to say farewell. We made our way around the lagoon to hit a few food booths and after settling in Morocco for a while to eat dinner, it was time to make it back to Germany. Guests had been staking out their spots for hours but we found some room. There were lots of Farewell IllumiNations shirts; lots of them put out by Disney but just as many were homemade. I bought myself a farewell ball cap. The energy was palpable. People were celebrating. The fact that Food and Wine was going on at the same time certainly fueled the atmosphere if you know what I mean.

The show began and so did the applause. Every peak moment drew a new round of cheers but for the most part, the crowd was fairly quiet. People wanted to listen and soak it all in one last time. My sons and I watched, clapped and cheered along with the crowd of like-minded fans. When the show came to a close to a thunderous ovation, the typical horde made their way to the exit. I typically hang around for quite some time, enjoying World Showcase with less people while everyone else makes for the busses and monorail. This time though, lots of fans stayed behind. Some of us thought there would be a new voiceover and something projected on Spaceship Earth paying tribute to the show and it's legendary 20 year run. But to no avail, and I thought that was just fine. I'd rather remember it just the way it was.

It was a wonderful night to be there as IllumiNations took its final bow. The faithful turned out in droves. There was lots of happiness in the air.. There were some tears, mine included. Think about that for a moment. People shed tears for a fireworks show? Is that even possible? In that respect, IllumiNations transcended the usual fireworks show. The emotions were real. It meant something to a lot of people. Yeah it was a fun fireworks show for sure. If that's your thing, it was impossible to be disappointed. But, if you scratched just below the surface, there was a whole lot more going on there besides pyrotechnics.

My plans were to see IllumiNations' successor, Epcot Forever, the following night, but we had tickets for Mickey's Not So Scary Halloween Party, so our night in Epcot came to a close as it always did: a slow walk around World Showcase, a pit stop in MouseGear, the greatest Walt Disney World gift shop, and then out to the busses with a new cache of memories courtesy of IllumiNations: Reflections of Earth. It was yet another perfect ending to yet another day at Walt Disney World.

That's all for this Top 5. As always, I'd like to hear what you have to say. Click on the link below let me hear your favorite IllumiNations stories, or your thoughts on the show coming to a close and I'll see you next time with another Disney Top 5.