As if I wasn't already exhausted enough after a five day trip storming the Walt Disney World parks, I had to pile on some more laps this past Saturday at my annual pilgrimage to New York Comic Con. At least at Disney you get to sit on the rides and attractions in between long stretches of walking. At Comic Con, we were pretty much on our feet from 9 a.m. when we arrived in Penn Station until 8 p.m. when we finally walked out of Artist Alley at Jacob Javitts Center. Just like a Disney trip however, the exhaustion is part of the experience. And just like a Disney trip, there never seems to be enough time to see everything. I'm quite sure I could've walked for another few hours, or another few days for that matter.

My kids and I have been going to New York Comic Con for many years now and it's still something we look forward to doing each fall. Disney is typically heavy on my mind when walking around Comic Con, and this year, having just returned from a Walt Disney World trip just three days before, I was still pretty much in my happy Disney bubble as I walked through the aisles of the Javitts Center always on the lookout for something to report on.

As I've said over the past few years of Comic Con reports, Disney seems to be keeping its big reveals and panels for their own "Disney Con," the D23 Expo, every other year in Anaheim. This year was no different. There was only one Disney-centric panel featuring three of Disney's biggest princesses: Ariel, Belle, and Tiana played by Jody Benson, Paige O'Hara, and Anika Noni Rose. I was pretty psyched to see that such a panel was scheduled for the Comic Con Main Stage, but I just couldn't make it back on Sunday to check it out. The three Disney Legends were also available all weekend for autographs and photos, so it was nice to see a bigger Disney presence this time around. New York Comic Con now rivals San Diego as the biggest comic/pop culture convention in the world and I'd like to see Disney continue to bring more panels, guests, and big reveals to the New York stage in the future.

Still, Comic Con always brings out the big Disney fans and I wasn't alone this past weekend in my quest to find Mickey Mouse stuff scattered throughout the con. What was I able to find this year? Let's take a look with my Top 5 Disney at New York Comic Con 2019.

It's a funny thing. The Disney Pin Trading phenomenon has been slowly seeping into my other worlds. Some of you may not be aware that the parking lot of Grateful Dead related concerts are a combination of a traveling circus and hippie flea market. Over the last few years, every other vending table in the lot has a pin board full of Dead related pins and the Deadheads are going crazy collecting them all. The same can be said for the various comic conventions I attend. 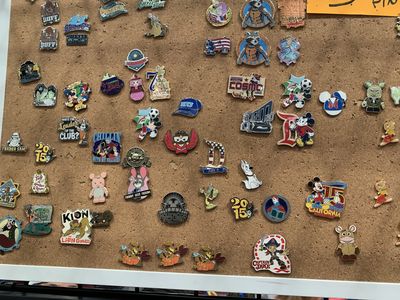 For every genre being represented at Comic Con, there's a vendor selling pins, some of them professionally mass produced and many of them being hand designed and created by fans. Liberally mixed in with the anime and superhero character pins are plenty of Disney pins. I walked out of Comic Con Saturday with about a dozen new Disney pins to add to my pin board. For the second year in a row, there was one huge booth devoted to just Disney pins, many of them rare, collectable, and hard to find.

I received an invitation from Disney Publishing to stop by their booth at New York Comic Con to check out their current offerings. I was greeted warmly by several cast members and a great selection of books for both kids and adults. Two series immediately stood out to me. The first was the latest in the Twisted Tales series. Since 2016 Disney has been publishing a series of books digging deeper into our favorite princesses stories with, as the title suggests, a new twist. "What if Aladdin never found the lamp?" or "What if Sleeping Beauty never woke up?" These are intended for the tremendous young adult demographic, but as with all things Disney, we grown-ups can enjoy them just as much as the kids can. The latest in the series is Conceal, Don't Feel and poses the question, "What if Anna and Elsa never knew each other?" The book was just released on October 1st. The kind folks at Disney Publishing were handing out chapter samplers. I gave it a read through and I can see the appeal. If you're a fan of the Disney Princesses or have someone at home that is, make sure to check these out. 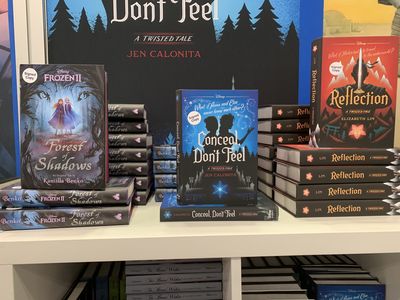 What really got me excited at the Disney Publishing booth were the 4 installments of Tales From The Haunted Mansion. They have the look and feel of a book that may very well have been on the shelves in the Gracey Manor library. 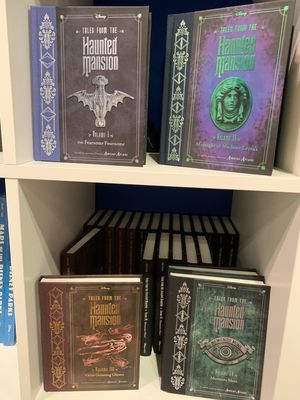 All four installments of the Tales From the Haunted Mansion series were available at the Disney Publishing booth. Photo by Chris Barry.

I picked up Volume 1: The Fearsome Foursome and it's sitting on my night table waiting to be read. Once again, these are clearly books for the young adult, but if you're a Haunted Mansion fan like me, they should probably be in your collection.

One of the best things to do at New York Comic Con is to head to a separate section called Artist Alley. In my opinion, this is the very heart and soul of an event like Comic Con. As you walk past the tables you see the established giants from Marvel and DC sitting next to independents and up and coming authors and artists trying to get themselves known to the fans. It's one of my favorite places to spend time at any comic convention. One of the names I've been seeing and speaking with over the last few years is Disney artist James Silvani, best known for his work on the Darkwing Duck and Ducktales series of books. When I approached James' table, he was hard at work creating an original sketch. He remembered me from last year and we had a nice talk, mostly about Star Wars Galaxy's Edge. As I flipped through his book of drawings, I was drawn to some of the more unique Disney characters, especially this drawing of Gurgi from The Black Cauldron. 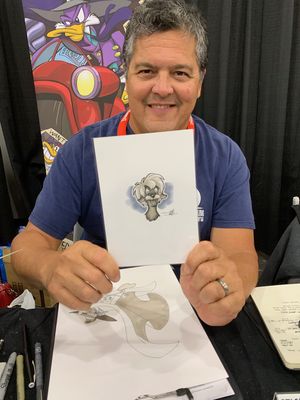 Artist James Silvani holds up one of my favorite Disney characters, Gurgi. Photo by Chris Barry.

It's discussions with the artists and original artwork like this that keep me coming back to Artist Alley at Comic Con year after year.

A staple of any self respecting comic convention is the cosplay, short for costume play. If there's a convention in town and you watch your local news coverage, it will certainly contain photos or footage of fans dressed in elaborate costumes paying tribute to their favorite movie, comic, anime, pop culture, or video game characters. As always, alongside the Batmans, Spidermans, Harley Quinns, and X-Men there was a healthy group of Disney cosplayers to be found throughout New York Comic Con. Here are a few of my favorites. 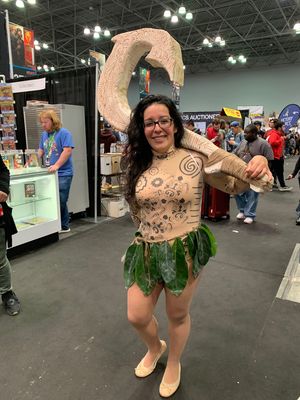 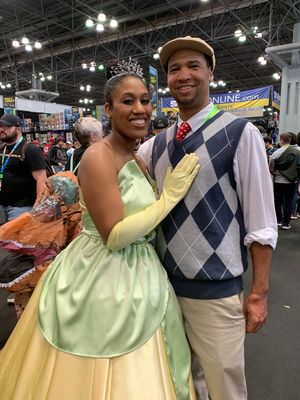 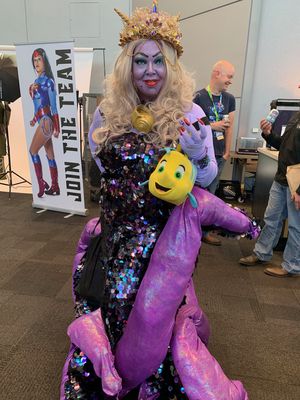 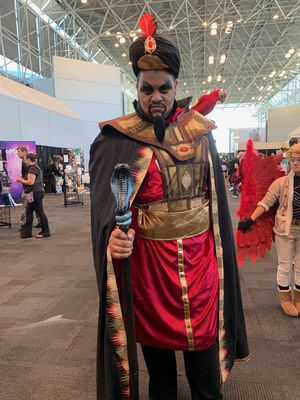 My favorite set of cosplayers though, had to be The Beagle Boys. I've always been a big fan of these three characters and I'm pretty sure this was the first time I've ever seen anybody dressed up as Scrooge McDuck's most consistent nemeses. 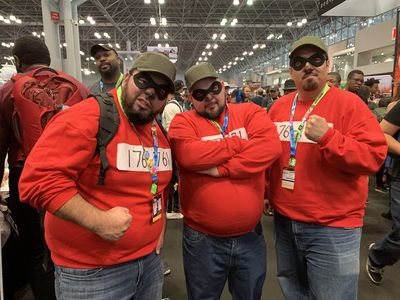 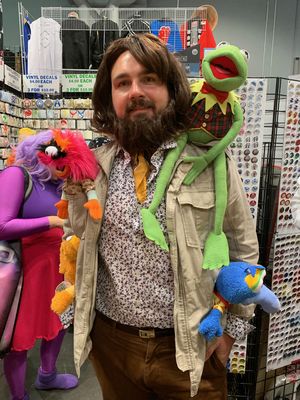 ...and Ken! Yes, this guy was walking around Comic Con in a giant box all day! 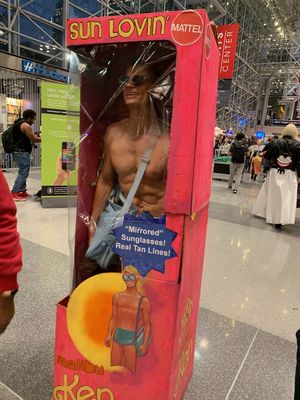 One of the best booths at New York Comic Con every year is manned by a group out of New Jersey known as Choice Collectibles. You can typically wander through their booth and find officially licensed artwork from Marvel, DC, Star Wars, Warner Brothers, Peanuts and, of course, a nice selection of Disney. This year mixed in among the awesome Mr. Toad painting... 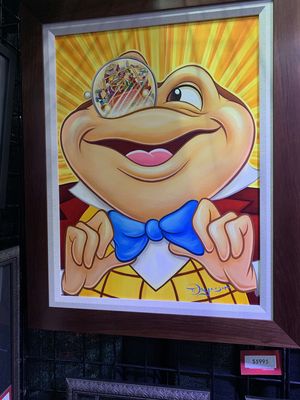 ...and this fantastic giclee of mixed Disney characters with an original Walt Disney signature attached... 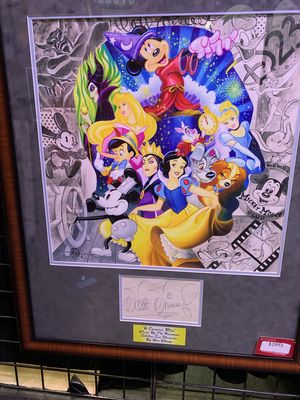 Another piece of Disney art from artist Tim Rogerson. Photo by Chris Barry.

...were these incredible Nightmare Before Christmas storyboards from artist Jorgen Klubien. 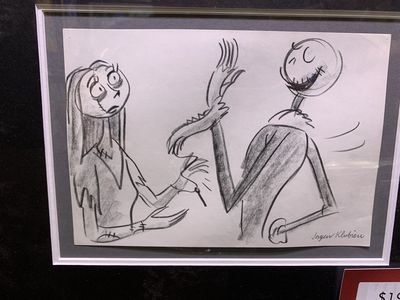 Jack and Sally as imagined by artist Jorgen Klubien. Photo by Chris Barry. 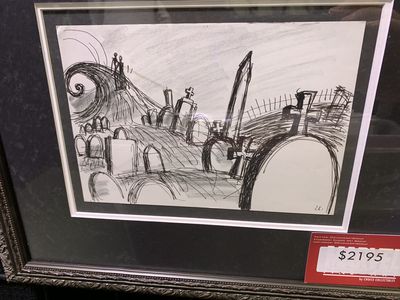 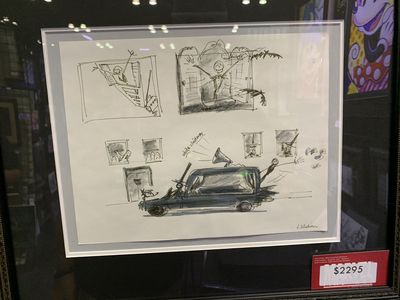 As much as I love the colorful finished examples shown above, I'm a tremendous fan of concept art. I love seeing early design sketches especially when they're like these, rough and in pencil. I feel like I'm getting a real insight into the genesis of my favorite characters. The Choice Collectibles booth has always been a major stop on my Comic Con journey, but this was the first time they had these displayed and they were just wonderful to behold. Regrettably, none of them came home with me.

The big thing about going to New York Comic Con, at least for me, is meeting and interacting with the people. They remind me so much of the Disney fans that I love to be surrounded by when I'm in Walt Disney World. It's a tremendous roomful of dreamers. The Disney crowd that I was with a week ago for the final Illuminations at Epcot could have contained many of the same individuals walking around the Javitts Center on Saturday. They're all incredibly unique, infinitely tolerant and accepting of one another and about as fascinating a crowd of people that you're going to find anywhere. The vendors, the artists, the creators and most importantly, the fans really have created a fantastic world all their own. They all march to their own drummers and I truly love being around all of them.

If you're a big Disney person like me and have never made it to a major comic convention like New York Comic Con, I suggest you check it out the next time one comes to your neck of the woods. You'll be surrounded by like-minded fans of magic, artwork, self expression and creativity. It's a perfect fir for us Disney fans. Trust me, you'll feel right at home.

That's it for this time. As always, I'd like to hear what you have to say. Click on the link below and let me know what you think about my coverage of New York Comic Con 2019 and I'll see you next time with another Disney Top 5.