To Pass or Not to Pass

To pass or not to pass—that is the question.

I'm going to stray from my usual beat this month and talk about a different kind of Disney shopping: What kind of admission media should you buy for the Disney theme parks?

I write about this now because I'm coming up on the end of an annual pass period, and have to decide whether to renew or not. My day job is as a finance guy, so in between daydreaming about Disney vacations, I analyze numbers all day long. I'm not proud, but spreadsheets are my life. Based on that, my inclination is to take a cold, numbers-only approach in deciding whether to renew my pass or not,. Then, of course, there's the high that comes from being able to visit Mickey and company whenever I want, so emotion plays a part too. I thought it might be fun to take you along on my journey as I wrestle with this basic choice, and hopefully will give some tips along the way that will help you make your decision when the time comes.

To give some background on the question from a personal standpoint, I'm a hardcore Disney Parks fan that lives in central New Jersey, a long drive up I-95 and I-4 from Walt Disney World. I basically get on the New Jersey Turnpike, drive 1,000 miles, hang a right in Fort Lauderdale, and—boom—there's the mouse.

I have family in the Tampa area, about an hour from Walt Disney World, and we typically visit three or four times per year. Our normal trip is a day or two at WDW and then a few days visiting in Tampa and then a longer (three- or four-day) Disney visit around the holidays. Our Florida family ranges from rabid Disney fans to those who have to be dragged there kicking and screaming, but all have Florida resident passes, so aside from summer and holiday blackout dates, can visit whenever they want.

Looking back at this past year, we hit a bonanza. We made the decision to purchase Platinum annual passports beginning on December 10, 2018 to coincide with our annual visit around the holidays. The passes cost us $900 each, including all taxes. By the time the pass expires, we will have wound up taking three trips, and longer trips than originally expected (four days in December, 3 in March and five or six for our upcoming November trip). Had we bought regular one-park-per-day tickets for each of those time periods, it would have cost us approximately $1,200, so for our two annual passes, we saved approximately $600 (which, of course, can be used to purchase some of the Disney merchandise I've discussed in my other articles).

In looking ahead to 2019–2020, renewing the passes was supposed to be an easy decision. As I said, we visit several times per year. One-day/multi-day passes had gotten expensive to the point that our break-even point (where the annual passes and day passes were the same price) was only about seven park days. Disney annual passes also come with a variety of perks, several of which I enjoy. These include:

The passes also act as park hoppers, so you can jump from park to park during the day without an extra charge. There's also the benefit of being able to visit a park for only an hour or two without guilt. For example, last March, my niece was performing in a concert at Disney Springs. My brother (her dad) asked us to meet him at Epcot for a bit before going to the show. We went to Epcot, ate lunch at the Electric Umbrella, rode Soarin', and left. With an annual pass, going to Epcot for just an hour and a half wasn't a big deal. Would I have paid $125 for a one-day admission to the park for the privilege of paying $15 for a cheeseburger and to ride one ride?  I don't think so.

You may be asking yourself, why not just wait and buy your pass to coincide with your first Disney trip of the pass period (more on that later). Disney makes that tricky by offering a 15% discount over the standard pass price for renewals. You can pay to renew your pass anytime from 60 days before expiration to 30 days after (though even if you pay afterward, the renewal date backtracks to when the prior pass expired).

With the ratio of cost leaning in favor of an annual pass as opposed to one-day/multi-day tickets, the 15% discount, all the perks and all the cool stuff opening at Walt Disney World over the next several years in anticipation of the 50th anniversary and the Epcot redo, a renewal was a slam dunk. Both the logical/math side of my brain and emotional/I must be with Mickey at all costs side of my brain were in agreement.

...and then, Galaxy's Edge opened. Why is this relevant you may ask? Because of Galaxy's Edge and the aforementioned cool stuff opening over the next few years, Disney felt it was time for a price increase, a big one. Annual pass prices went up by as much as 30%. A Platinum pass that ran $900 last year will now set you back almost $1,200. The logical math side of my brain started screaming that this might not be such a good deal anymore. So we went back to the drawing board and analyze again. Let's see what I came up with.

I always start by looking at the calendar for the next year, trying to guess when I might be going and for how long. Based on what I expect. we'll do a trip in March like I described above, where i visit WDW for two days and then visit family in Tampa. There's usually a day trip in June before my family's Florida resident passes go into summer blackout mode, and then I'm eying October for maybe a four-day trip to take advantage of Epcot's Food and Wine Festival (and hopefully to ride Ratatouille and Mickey and Minnie's Runaway Railway for the first time).

Disney has recently adopted tiered pricing, where ticket prices change with the season (you'll pay a lot more during the busy holiday season than when it's slower in the fall or winter). You can actually go to the Disney website, and they'll tell you how much tickets cost on a given date.

Based on my projected trips and the prices as per Disney, the costs would be as follows:

The renewal rate for a Platinum annual pass, including tax, is $1,012.82. Based purely on admission costs, the pass would be a narrow loser.

But what about the other perks? That depends on how important they are to you and whether or not you'd use them. For me, the 20% merchandise discount is obviously a big one. For my analysis, I'm going to assume I spend $500 per year at WDW on merchandise. A 20% discount would therefore give me $100 in savings.

The photopass, which costs $150, is a nice perk that I use on occasion, but it's not enough of a thing for me that I'll count it. The dining discounts, I do use. It's hard to quantify, since different restaurants offer different discounts—but I do try to hit Magic Kingdom's Crystal Palace on each trip. They offer a 10% discount. The check for a party of two is around $100, so this is another $10 savings.

As far as parking, I tend to avoid the busses and use my car while on property, but with the skyliner up and running and the $25 per day parking fee, I'll make due with Disney transportation if I have no pass, so not really a save for me.

For hotel discounts, I do like to stay on property at least once and the passholder discounts are generally pretty good. That said, there are usually other discounts offered as well, and I have family with far cheaper Florida resident passes that can get me those discounts anyway. Again, not really a save for me.

So where does this all leave us?

This, my friends, is essentially a draw. 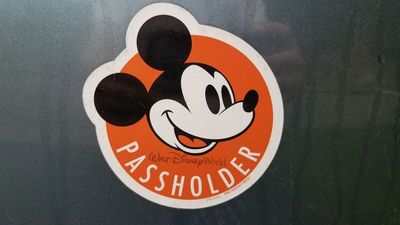 There is a cool passholder magnet on my car. Photo by Gregg Jacobs.

So what, dear readers, is my conclusion based on the above? I'm going to shock you all, I think, by telling you that I've decided not to renew my passes. Did the grinchy financial analyst side of my brain win out?  Maybe, though it boiled down to common sense.

Personally, I think Mickey got a little greedy with the massive price increase. For an out-of-stater like myself who doesn't have a concrete 2020 travel plan yet, it also doesn't make sense. If one of those trips doesn't happen, I've taken a big loss. If I do decide to go more often or stay longer when I do go, the only risk is an extra $150 to buy a pass at the full, non-renewal rate. This isn't even really a risk, since if I don't visit until March as expected, if I renew, I'd be paying for almost three months that I wouldn't be using. If I buy a pass later, even at full price, I could potentially squeeze in another trip at the back end.

Don't get me wrong. I'm still excited about WDW's prospects and will be visiting. I have plenty of shopping and merchandising topics lined up for you for the holidays and 2020. I just send out a notice to my sister that I may be using her for her passholder discounts next year.

Please note, of course, that your mileage may vary. You may visit more or less often or at different times of the year. You may love photopass, and that $150 discount is valuable to you since you'd buy it if you had to. You may spend $10,000 on merchandise each year (you are so lucky!), so that discount alone pays for the entire pass. I encourage you to do you own analysis and take advantage of all options to make what can be a very expensive vacation a little cheaper.

There are Florida resident discounts and Magic Your Way packages that combine hotels, park admission and meals into once price. They're always offering specials. Mickey, while he likes money, does often offer good discounts, so keep your eyes open and also visit Mouseplanet often. Alan Dalinka has all the discounts listed in his weekly Walt Disney World Resort update.

Here are a few links to help you on your own journey:

The hope in sharing this saga with you is to give a point of reference to those going through a similar decision making process. I'd love to hear about your own stories, thoughts and experiences in planning your own Disney vacations.

Thanks as always for reading and see you next time.