The United Kingdom Pavilion at Epcot: A Photo Tour

This month we made our way through the United Kingdom at Epcot, in world Showcase. We found authentic merchandise from England and Scotland, sampled the traditional British food, and enjoyed Disney's recreation of the British architecture. The pavilion seems packed full of British culture and history and, to us, represents a good cross-section of how the United Kingdom really is. Take a look at what we found: 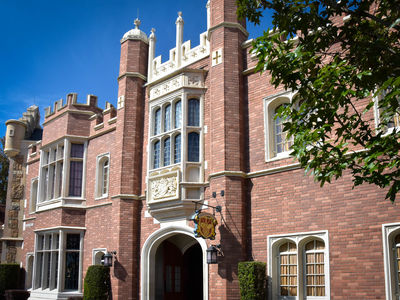 One of the more prominent building facades as you enter the United Kingdom at Epcot is on the right, approaching from Canada. This facade is based on Hampton Court Palace, located in the borough of Richmond upon Thames River. Richmond is about 10 miles southwest of London. Inside this building, the first shop you'll see is the Sportsman's Shoppe. Photo by Bonnie Fink. 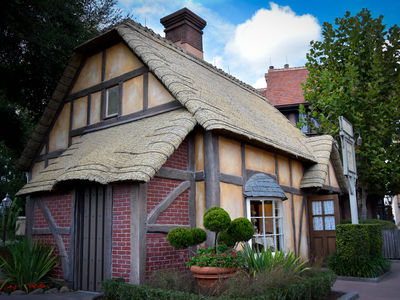 The front of the Tea Caddy is a thatched roof timber frame construction that represents a building from the early 1600s. This particular building is where you can get a good selection of Twinings Tea products. It's interesting to note that the thatches on this roof—and all thatched roofs we've checked at Disney—are actually made of aluminum. It's the magic of Disney after all. Photo by Bonnie Fink. 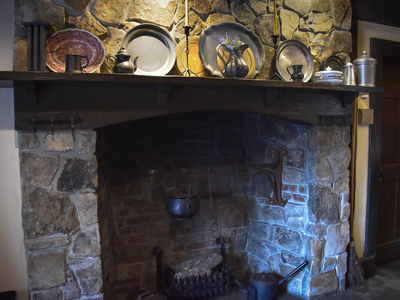 Our information tells us that the Tea Caddy is supposed to depict the home of Anne Hathaway, the wife of William Shakespeare. The fireplace, as well as many other decorations inside the building certainly indicate a home setting and the period of the building is certainly right. Photo by Bonnie Fink. 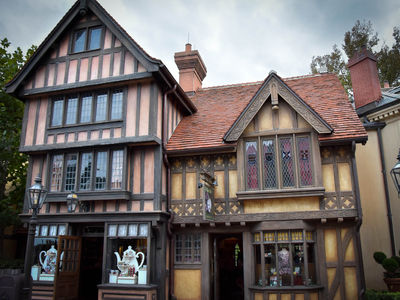 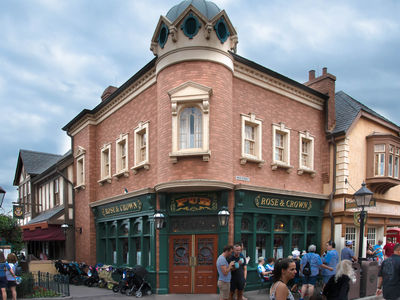 One thing you learn if you go to England (the real England) is that pubs are important. Even if you don't drink, you'll find yourself in a pub if you want to eat since that's where much of the food is served. The Rose and Crown at Epcot's United Kingdom is an example of pretty much any well maintained pub you'd find in England. We were told that the name, Rose and Crown, was decided because Imagineers did a survey of all pubs in the United Kingdom and discovered that the words appearing most often were Rose and Crown. Photo by Donald Fink. 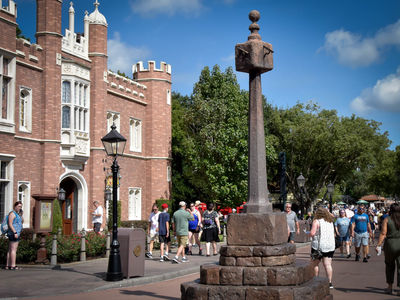 You would expect to see a statue in a town square in Great Britain, but here at Epcot there's a vertical sundial. Our research didn't reveal why this particular sundial is here in Epcot, but sundials do figure prominently in Britain's history. As for determining when sundials were first used in England, this subject seems to be a discipline of its own. For us, the sundial is an interesting object and a good place to rest for a minute before walking on. Photo by Bonnie Fink. 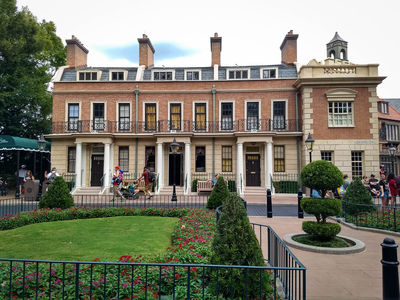 Behind the main shops is a town square that we've read is patterned after Hyde Park in central London. We're not quite seeing the resemblance, but it could be true. Behind the park is a building facade that is made to look like some of London's typical Row Houses, which is very realistic. Photo by Donald Fink. 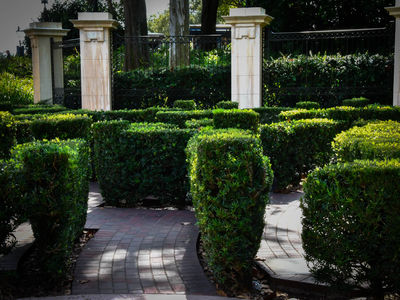 Hedges are popular in gardens in Great Britain, and hedge mazes are sometimes found in parks and gardens across the country. At the United Kingdom in Epcot, you can find a kid-sized hedge maze in the back garden near the stage. Photo by Donald Fink. 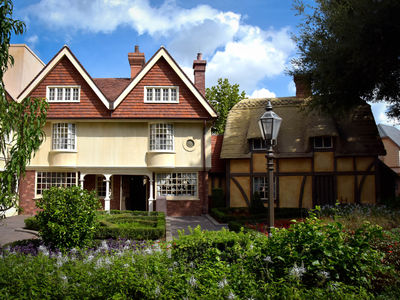 This garden is located behind the Tea Caddie and the Queen's Table. We believe it symbolizes a garden found at an Apothecary in historical England. During the International Flower and Garden Festival, Twinings Tea offers free tours of this garden, showing off some of the plants that go into various tea blends. Photo by Bonnie Fink. 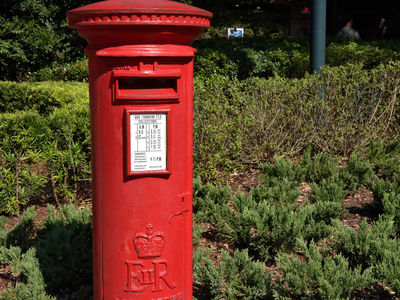 It turns out there are about 115,500 mailboxes in the United Kingdom; enough to place a box within 1/2 mile of 98% of the British population. The idea of using free-standing postal boxes dates back to an 1840 Postal reform. These Victorian style boxes began appearing in 1852. They usually have a cipher, or insignia, of the reigning monarch at the time of placement. This one, with its EIIR insignia, bears the insignia of Queen Elizabeth II, as do about 60% of the Royal Postal Boxes in the U.K. Photo by Bonnie Fink. 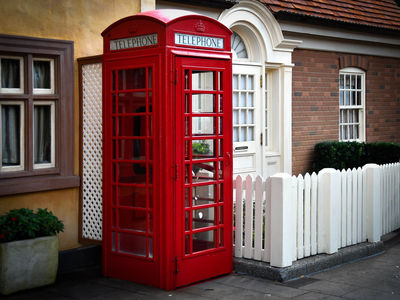 This is known as a K6 Phone booth. The K represents the word "Kiosk." When introduced around 1935, it was to commemorate the Silver Jubilee of King George V. It was often referred to as simply a "Jubilee Box." The K6 remained the current phone booth in use in England until 1968, when it was replaced by the K8. Photo by Donald Fink. 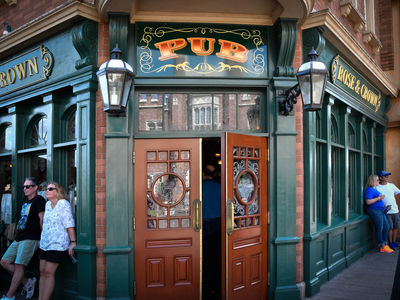 The Rose and Crown is a pub in the United Kingdom at Epcot. As with many pubs across England, it's also a restaurant. In fact, it's the only table service restaurant at the United Kingdom pavilion. Entering these doors will get you into the pub. To get a table at the restaurant, there's a station to the left of the pub, not shown here. Photo by Donald Fink. 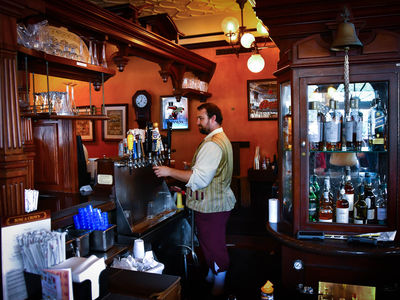 Inside the Rose and Crown Pub, you'll find a bar decorated like many pubs we've seen in the United Kingdom. This one absolutely took us back to a pub we visited for lunch in Windsor near the Windsor Castle a few years ago. Photo by Donald Fink. 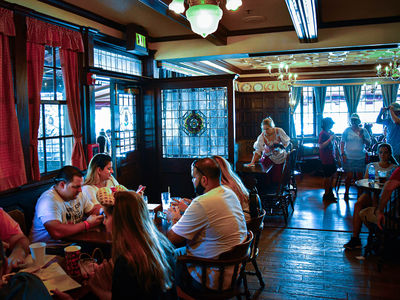 Inside the Rose and Crown, guests can stand at the bar or find seating at a table. Photo by Donald Fink. 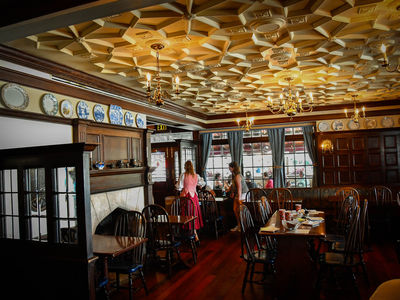 The restaurant part of the Rose and Crown has a warm, welcoming feeling about its decor. We felt at home when we had lunch here. The menu is traditional English with items like Fish and Chips, Bangers and Mash, Shepherd's Pie, and Corned Beef Cabbage, it's easy to find something British. Or at least, what we Americans think might be British. Photo by Donald Fink.

Most of us here in the US know what you get when you order Fish and Chips, but some of us may have never heard the term, Bangers and Mash. Simply put, Bangers and Mash is an English dish made of sausage and mashed potatoes. It's often referred to as Pub Grub. In 2009, Bangers and Mash was listed as Britain's most popular comfort food in a survey by the TV channel, Good Food. Here's a menu from the Rose and Crown. 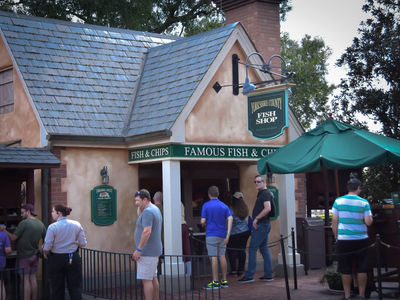 The quick service restaurant at the United Kingdom in Epcot is called the Yorkshire County Fish Shop. There's one entree item on the menu, which is Fish and Chips. It consists of two strips of fish served with chips. When we say chips, that's British talk for French Fries. If you like fish, or even only occasionally like fish, this might be some of the best quick service food at Epcot. It's certainly worth a try. Photo by Bonnie Fink. 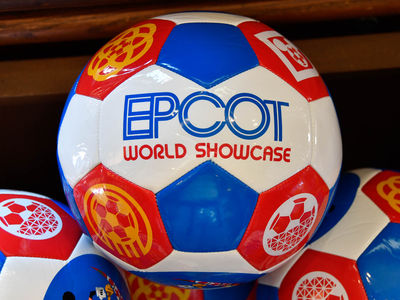 We've seen kids walking around Disney, bouncing a ball, and wondered about the wisdom of bringing your child to Disney with a toy that has the potential to go horribly wrong in such a crowded environment. It turns out that soccer balls like this one can be purchased right here in the United Kingdom. We found a bin of these and other balls in The Sportsman's Shoppe. Photo by Donald Fink. 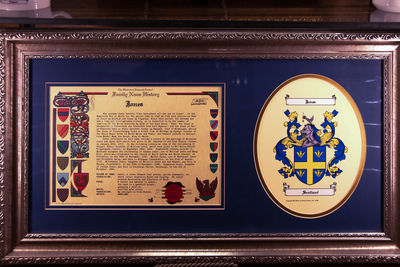 At the Crown and Crest in Epcot's United Kingdom, you can search for your family crest and have it printed along with a brief description of your family name. The framed version depicted here is a bit expensive, but you can have the pages printed without the matting and framing for a reasonable price. Both versions are available "same day," but if you need it shipped home, it can take four to six weeks to arrive. We looked up Don's family name of Fink and discovered that it was listed as "Finck." Our research indicates that his family name was indeed Finck in Germany, before his family came to America in the 1700s'. Photo by Donald Fink. 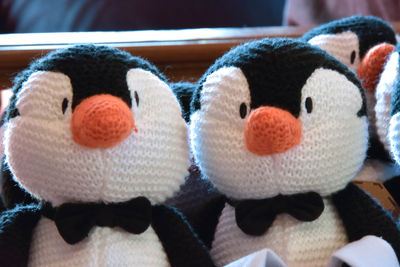 These penguins are from the movie, Mary Poppins. You can find them in Epcot's United Kingdom at the Toy soldier. Photo by Bonnie Fink. 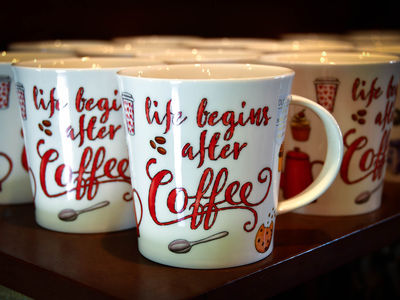 When we found these cups at the Biscuit Barrel, we were surprised at the price. They seemed to be very expensive. But when we examined them carefully, they also seemed to be of extremely high quality. Also, they're made in England; a rare find for fine porcelain these days. Photo by Donald Fink. 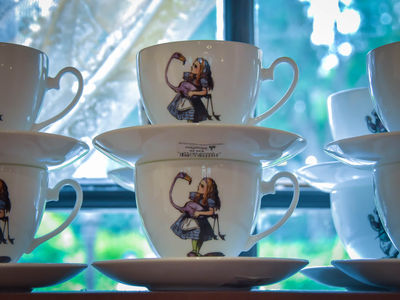 These cups are showing Alice in Wonderland. In this scene, she's trying to play Croquet using a Flamingo as a mallet and a hedgehog as a ball. Alice in Wonderland, in addition to being a classic Children's story, was a Disney animated film, initially released in 1951. A Live action version of the story, directed by Tim Burton, was released in 2010. You can find these cups in the Biscuit Barrel. Photo by Bonnie Fink. 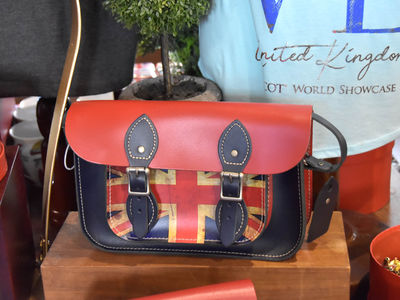 Here's a purse we found at the Queen's Table at Epcot's United Kingdom. There are many different British themed items, as you might expect. Photo by Bonnie Fink. 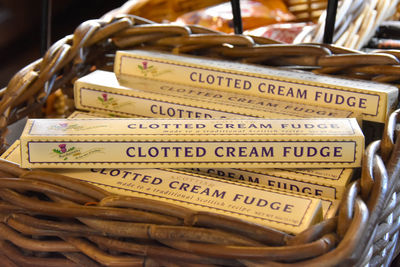 There's a selection of packaged sweets from the British Isles at the Biscuit Barrel. Here is a package of Clotted Cream Fudge from Scotland. Clotted Cream is apparently a big deal in Britain, thought to date back to the time of the Phoenicians. It's described as having a nutty, cooked milk flavor, often containing as much as 60% fat. This is no doubt some serious fudge. Photo by Bonnie Fink. 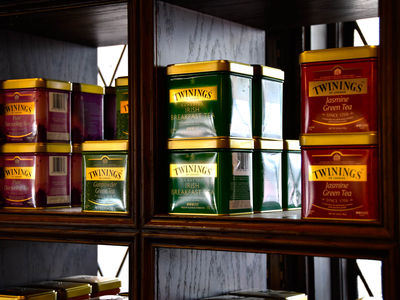 You can find a wide variety of Twinings Tea at the Tea Caddy. Photo by Donald Fink. 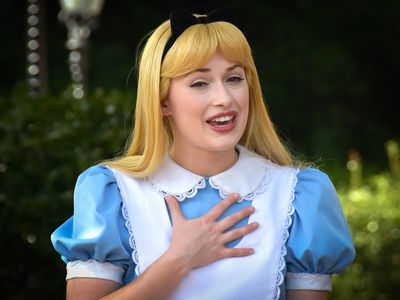 Outside of the Tea Caddie, along the main thoroughfare, you can see Alice, from Alice in Wonderland. Photo by Bonnie Fink. 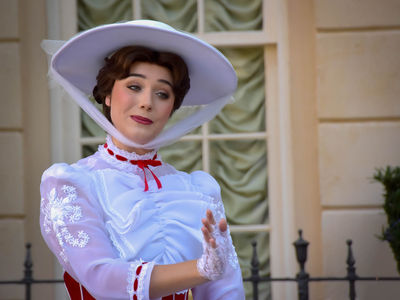 In the garden behind the shops at the United Kingdom pavilion, you can find Mary Poppins. Like Alice, Mary Poppins appears at different times during the day. You can find a sign posted near the spot listing the times she's expected to be there. Photo by Bonnie Fink.

At this year's D23 Expo, Disney announced the creation of a Mary Poppins Attraction at Epcot. No details were given about whether it would be a ride, a show, or maybe a small neighborhood. What we do know is that Epcot is undergoing a major overhaul at the moment, so it could be nearly anything.

At the Rose and Crown, you may find Carol Stein at the piano playing for guests. She is a talented lady who's fun and entertaining to watch. Video by Donald Fink.

You can get a taste of British Rock and Roll most days at Epcot's United Kingdom pavilion. Check your Times guide and head around to the garden behind the shops to see the British Revolution. Video by Donald and Bonnie Fink.

We've spent time in the United Kingdom here in Epcot. We've sampled the food, shopped the merchandise, and enjoyed the entertainment, and it never gets old. We can recommend that anyone visiting Epcot and especially World Showcase, spend some time here and see what you can find.

If you want to see more of the United Kingdom, be sure to look over Chris Barry's recent article, entitled, "My Disney Top 5 - Things to See in Epcot's United Kingdom Pavilion."