I'm happy to say that on the day this article is published on Mouseplanet, I'll be on Day 1 of a Walt Disney World vacation, my first in eight long months. Specifically, I'll be strolling along the shores of the World Showcase Lagoon, sampling the many goodies from around the world available during one of the last days of Epcot's Food and Wine Festival.

Like all of you when you travel, I did a lot of prep work in getting ready for this vacation. I carefully chose my Disney resort hotel (Pop Century—gee, I hope the Skyliner doesn't break down again and is running when I get there). We made our Fastpass reservations (including Frozen, Soarin', Toy Story Mania and Splash Mountain (which I will ride with my niece for the first time). We set up our dining priority seatings for Tony's Town Square Restaurant at the Magic Kingdom, San Angel Inn and Epcot, and Chef Mickey for eight people (we finally secured the Advanced Dining Reservation for it at 7:00 a.m., exactly six months to the day in advance).

For me, however fellow Disney shoppers, setting up a rough shopping plan is also part of the fun. I like to be surprised as much as the next guy, and I'm sure there are some wonderful finds that I'll stumble upon during my visit, but I always have a game plan before I go and a few things I'll likely be picking up. This month, I'm going to let you in on my game plan as we prepare to go and spend 18 hours in the car with two dogs in the back seat, one of which starting whining around hour 2 the last time we did this—but I digress.

What follows are my shopping targets for my upcoming trip. Hopefully these will give you some ideas as to what you might want to look for when you go (or online) or for the holidays. Or you might just think I'm crazy, which is OK, too.

For many years, I had an iPhone. A couple of years ago, my iPhone 6 was ready to die and it was time for a new phone. The iPhone X was insanely expensive, so I decided to give Android a try and switch to the Galaxy 8. Now it's 22 months later, and I came to the crashing realization that I missed my iPhone. I found out I could get an early AT&T upgrade for not much money, so I went out and got an iPhone 11, which was badly in need of a Disney phone case.

I was therefore happy to hear that D-Tech has begun selling customized iPhone 11 cases.

I wrote about D-Tech in another article a while ago, but the idea is that for $29.95 or $34.95, you can go to a computer screen and choose from hundreds of images to put on the back of your phone case. You can also personalize the case with your name, date of visit, and so on. You simply hit Enter on the screen, pay, and 20 minutes later, have your new phone case.

There are D-Tech locations in the Co-Marketplace at Disney Springs and in the roundish looking building at the Space Mountain exit in the Magic Kingdom. You can also purchase premade cases all over resort property, as well as online.

I am a big amateur park historian, and love to celebrate new openings and Disney Parks firsts. As I stated above, the main reason I decided to stay at Pop Century this trip is so I could ride the Disney Skyliner for the first time. I made the reservation back in March anticipating a September opening in time for our trip, and—recent incident aside—the Skyliner system just served its 1 millionth customer and is going strong.

Of course, I need something to take home with me to commemorate the occasion. In true Disney fashion, there's plenty to choose from. There are many different T-shirts, holiday ornaments, MagicBands, commemorative pins, and baseball caps. 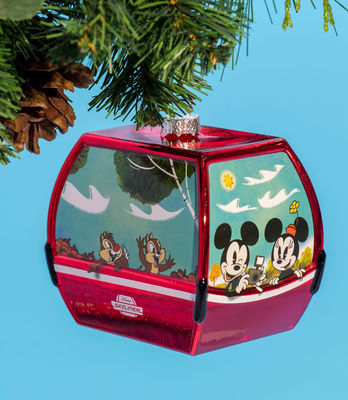 I love the Skyliner Holiday ornament that looks like a gondola car.

The two items I really have my eye on are the mugs that come in the shapes of a gondola car and a really cool retro-style print with images of the Fab 5 riding the system. The print includes the date and destinations of the system (Epcot, Disney's Hollywood Studios, Disney's Caribbean Beach Resort, Disney's Riviera Resort, Disney's Art of Animation Resort, and Disney's Pop Century Resort). It's going to come down to a close call between those two for me.

Skyliner merchandise is rumored to be available all over property, not just at the places it visits.

The next item is something I've had my eye on for a while. Crazy socks have been in style for a while now.  ou see all the guys at work wearing socks with kooky colors and patterns. Mine, of course, have the added spin of being Disney-related.

Shockingly, there is one pair of Disney socks that has thus far escaped my grasp. Available at Memento Mori, right outside the Haunted Mansion in the Magic Kingdom (at also at other locations around the World), there are actually several different pairs of Haunted Mansion-themed socks. There is a set with the image of the famous Haunted Mansion wallpaper. Another set features Madam Leota. Still another set has the images of the hitchhiking ghosts.

The pair I have my eye on, however, has the paintings from the stretching room, one on each sock. One sock has the woman sitting on the tombstone and the other has the three guys slowly sinking into quicksand. My Mickey Mouse socks are already legend at work, and I anticipate wearing my new stretching room socks on my first day back in the office. 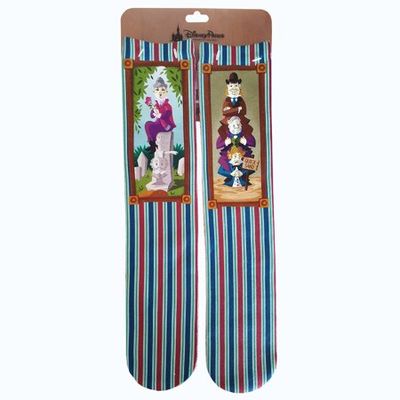 I want the set of socks featuring the paintings from the Haunted Mansion stretching room.

The next item on the hitlist is one I'm not sure even exists yet, though I'm fairly certain that it does.

One of my latest collections has been the growing set of Disney keys. I wrote about these a while ago, but Walt Disney World has been selling a set of keys, roughly four inches long and made of metal, each key commemorating a different attraction or some other aspect of the Disney universe. Past entries in the collection have been several keys related to the Haunted Mansion, Pirates of the Caribbean, Alice in Wonderland and 3 of the Walt Disney World theme parks (Magic Kingdom, Epcot and Animal Kingdom).

Each visit, I steam to stumble upon a new key (they run $35 each). My last trip, I picked up a new Mickey Mouse key. It was silver and had Mickey as Steamboat Willie at the top of the key.  I'm not 100% sure, but I'm pretty confident I'll find a brand new edition to add to my key collection on my upcoming trip (maybe the illusive Disney's Hollywood Studios key I haven't seen made yet). 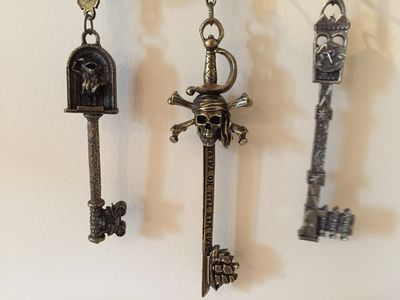 My plan is to pick up a new key to add to my collection. Photo by Gregg Jacobs.

The keys are generally available at the Art of Disney stores in Disney Springs, Main Street in the Magic Kingdom and at Epcot.

There are few things in life that excite me more than visiting a new Disney Parks land for the first time. After waiting for many years, my upcoming trip will mark my first time visiting Galaxy's Edge at Disney's Hollywood Studios.

I can't wait to see all the Star Wars theming and detail. I look forward to piloting (or navigating) the Millennium Falcon while riding Smuggler's Run (and Mickey if you're reading, I know that Rise of the Resistance isn't opening until December 5th, but if you could see your way clear to doing a soft opening a week or so early, I'd be ever so grateful). I can't wait to drink blue milk, and If I can manage to get a reservation, to visit Oga's Cantina.

Of course, I also want to visit the Galaxy's Edge marketplace to see what they have to offer. I can't wait to see the Dok-Ondar's Den of Antiquities, visit the Creature Stall, go to the Toymaker and dress up at Black Spire Outfitters.

Truthfully, I have no idea what I want to buy here. I just can't wait to meander among the different shops and see the one-of-a-kind merchandise they have to offer. I've tried to avoid spoilers to some extent as to the merchandise lineup, but I've read that there are a lot of unique items, with less focus on the usual T-shirts/mugs/key chains, and more on things that'll only be available there. As with the Skyliner, I'm just excited to have a new Disney experience. To commemorate the occasion, I'm sure there'll be something from Batuu that'll make its way home with me. 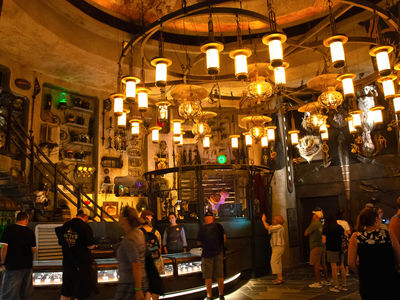 I can't wait to see the one-of-a-kind items at Dok-Ondar's Den of Antiquities. Photo by Donald Fink.

Beyond the items mentioned above, who knows what I'll wind up bringing home or what trouble I'll wind up getting into. I have a self-created rule of no hats, mugs or T-shirts, since I have stacks of all three at home already. I also went through my drawers and realized that while I love buying Disney pajamas, I already have more pj's than I could possibly need. All that said, it's a safe bet that, ha ha, I'll be coming home with at least one hat/mug/tee shirt.

With the holidays approaching, I usually pick up a gift or two for myself that'll appear under the tree, so it may also be time to buy that Art of Disney Disneyland or Haunted Mansion sign that I've had my eye on for some time. In fact, when walking into Art of Disney, my little face tends to light up and I see tons of items that I didn't know I needed until I got there!

There's also typically a Disney ornament that'll make an appearance on the tree, so there's another possibility.

I have eclectic taste in Disney merchandise, so who knows what I'll find on my latest treasure hunt, but after eight long months of waiting, I can't wait to find out.

Thanks for reading. I'd love to hear about any treasures that any of you have picked up on your Disney trips!