Frozen 2 is Better than the First

Frozen 2 opens at El Capitan Theatre in the heart of Hollywood. Photo by Todd Pickering.

If you are questioning whether you should rush out to see Frozen 2 because you somehow missed the 2013 block buster that blew our music charts away with the ever present "Let it Go," you needn't worry. Frozen 2 is brought to you by the original team with screenplay by Jennifer Lee and directed by Lee and Chris Buck. The music team is also back with score by Christophe Beck and songs and lyrics by veteran team Robert Lopez and Kristen Anderson-Lopez. The original film was a clunky adaptation of Hans Christian Andersen's fairy tale "The Snow Queen". In the former picture it seemed all of the energy and momentum went into the centerpiece of the hit song "Let it Go" leaving a disjointed and strange telling of the also disjointed original source material. Musically speaking all of the songs were at the beginning of the film. In this sequel this team does a much better job with this original tale of telling a cohesive story with a much better cohesive musical through line. The film starts with a flash back/prologue starring our story's heroes Anna and Elsa as children. They are snuggling in bed with their Mother the Queen and listening to a tale told by their father the King. When the King was a young prince he accompanied his father into the Enchanted Forest upon the completion of a dam that the people of Arendelle built to help the tribe of Northuldra and thereby declaring a truce between these two kingdoms. But a mysterious battle breaks out and the prince is saved by a spirit of air and whisked to safety on the outskirts of the forest. But it is too late for everyone else. The elemental spirits are outraged by this fighting and a magical mist surrounds the forest that keeps anyone from ever entering it again. As the Queen sings a lullaby to the young princesses opening credits roll.

The opening exposition song re-introduces us to our four main characters "Some Things Never Change" is the opening exposition song where we meet our four protagonists. This opening song has a lovely folksy acoustic guitar accompaniment with some lovely fiddle touches but also sits firmly in the musical theatre opening number. Anna and Olaf sing of being the best of friends. Kristoff sings to his mute reindeer pal Sven about proposing marriage to Anna and Queen Elsa all alone sings about hearing a mournful musical tune carried on the wind (hauntingly sung by Norwegian recording artist AURORA). Even though Queen Elsa decides to ignore this call at the end of the song we know she will not be able to eventually and this will lead us into The Enchanted Forest. This ghostly call could also not be ignored by the little ones on opening day either as they started echoing this call throughout the film making a live theatre experience even more magical. For those of you who are fans of the first film it seems like Elsa's character has frustratingly been reset to the original tale and once again she is determined to do things on her own entirely forgetting the lesson of teamwork and sisterly love she learns at the end of the first movie. This conflict set up again might be tedious for fans but remember the opening song is indeed called; "Some Things Never Change."

After a thankfully brief visit sans song with The Rock Trolls, our four heroes (five if you count the reindeer Sven) break through the magical barrier into The Enchanted Forest and Elsa exclaims, "This forest is beautiful!" It truly is. The whole palate of this film is autumn. The leaves fiery reds, deep golds and vibrant yellows makes for a stunning back drop to this film. Elsa generates enough cold blue ice throughout the film. All of the nature sequences are stunning. Blowing leaves to give the wind spirit form are just breathtaking. The Rock Giants are detailed and frightening. The purple fire that element that rushes through the forest in the prologue and throughout the film is gorgeous up against an autumnal backdrop. Disney has once again delivered a feast for the eyes.

"Into the Unknown" is Elsa's yearning ballad in the sequel that replaces the mega-hit "Let it Go!" Idina Menzel once again proves that she has such an amazing control on her voice which also features the artist AURORA again countering her with back up vocals. On opening day it didn't seem to have the same immediate effect that "Let it Go" had but only time will tell. Queen Elsa this time takes her sister and friend with her to tackle the unknown so this song works nicely with the plot and drive of the musical not isolating her.

Olaf once again delivers the biggest crowd-pleasing song for the little ones. He comically sings about being brave as he is attacked by all of the elements of fire, air, water and earth in the song "When I Am Older". This short but sweet sequence is rife with great comedy slapstick as Olaf is blown about, drenched and almost burnt. His snowman's body is pulled apart and re-arranged in so many hilarious ways making him one of Disney's all-time great comic characters. Josh Gad's comic timing and exuberant singing voice once again brings Olaf to life. If there is any confusion as to remembering the first movie and what happened one could easily argue that Olaf's solo retelling of the Northuldra and Arendelle soldiers that have been trapped in the forest all these years is a better version than actually watching the movie. It is a highlight of the film whether you have seen the original or not! The directors obviously knew how great this sequence is so do yourself a favor and sit through all of the credits to see the final button scene starring Olaf at the very end. Absolutely priceless.

Elsa has an epic battle sequence with the purple fire using her ice powers against it. When she finally corners the mysterious fire it turns out to be a tiny, adorable salamander! Salamanders have long been associated with fire so once again Disney has done its research very well. They continue to fight for a while which caused a small child behind us to ask her father, "What's going to happen?" He replied "They're gonna sell a lot of toys." As cute as this little guy is (he is called Bruni) this movie already has an amazing non-speaking character in Sven the reindeer. Once Elsa tames this little guy as her pet the character doesn't seem to aid in the story telling except to show us that the elements are being tamed and Elsa is becoming one with them. Sven still remains our stand out non-speaking comedy in this film and for that we are indeed grateful.

At this point Anna, Olaf and Elsa have gone off still in pursuit of that mysterious voice while Sven and Kristoff are off working on that wedding proposal. This tired trope of looking for the right moment to pop the question and then bumbling the proposal has a major pay off as attempts one of the best songs of the picture which also highlights Jonathan Groff (the voice of Kristoff) smooth singing voice that was sadly lacking from the first movie. While chatting with Sven, Kristoff segues into the lovely 80s style ballad entitled "Lost in the Woods." This number is filmed in the style of a 1980s video done to perfection. For the parents in the audience it immediately whisks you back to those early MTV days as this number is done in the style of a 1980s video. The song starts out with a driving piano introduction. The vocals come in next with a strong music counter to the ever-present piano. The drum beat is then layered in. Oh, but there is more. The powerful back-up vocals are sung by unlikely characters in the film. The back-up singing seemed reminiscent of some of the seminal band Queen's vocals and right at that point there is an amazing tribute to one of their most iconic videos.

Meanwhile Elsa has forced Anna and Olaf away from her because she doesn't want them hurt. With humongous Earth Giants made of rocks walking about this seems rather counter-intuitive. Now Queen Elsa seems to be one part Disney Princess and one part Super Hero in this film. She wears leggings under her skirt this time reminiscent of the bolder and stronger Bo Peep of Toy Story 4 and the overly formulaic action scenes from a Marvel film seem to replace the pacing of a musical. The scenes where Elsa fights the waves of the ocean and eventually taming the water spirits in the form of horse are shear stunning animation. And the super hero metaphor is even more enforced when she enters an ice fortress very reminiscent of Superman's Fortress of Solitude where he too comes face to face with the knowledge of his past. But it is indeed a musical so Elsa sings a second power ballad once again with back-up vocals by AURORA entitled "Show Yourself". Unlike "Into the Unknown", this song actually elicited applause. This appears more due to Elsa's walking through actual ice memories of the original film and using her powers to make comic comments on a handful of moments from the original film that the crowd of fans relished.

Elsa has indeed sent her sister and Olaf into the clutches of The Earth Giants. The super hero film format again comes in form of this battle and things seem to be hopeless for our heroes. Someone even commented behind us that "It seems like an Avengers movie" at this point. Except at this point Anna sings a song to try and help her go on called, "The Next Right Thing". This is a thankless song at this point of the film for the lovely singing voice of actress Kristin Bell because the film is culminating into it's final scenes. Putting a lovely song this late into the motion picture is a hard sell as lovely as it is. You needn't worry that things don't turn out right for our heroes. Despite the drawn-out final battle scenes and reunions the crowd loved the film and as an overall effort it seems more fully developed and cohesive than the original

If you live in the Los Angeles area or are taking a vacation we cannot stress enough what an amazing experience it is to attend a film at the historic El Capitan Theatre in Hollywood. There are so many photo opportunities and a fun short pre-show with live actors playing Anna and Elsa it becomes an experience that is unmatched anywhere else and is a nod to the old showmanship of the Sid Grauman days of early Hollywood. As for you Disney California Adventure fans it seems like an obvious choice to put this story onto the Hyperion stage while the sets and cast would be easily transformed. Anna and Elsa also sport their Frozen 2 outfits already if you want to meet them, get autographs and tack a photograph with them. Stick with MousePlanet as we see what is in store for all things Disneyland Resort and Walt Disney World for 2020. 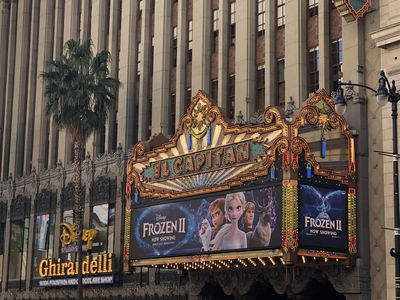 If you are in Southern California seeing this film in this beautiful theatre is a very worthwhile experience. Photo by Todd Pickering.