Backstage Pass to Festival of the Holidays Music 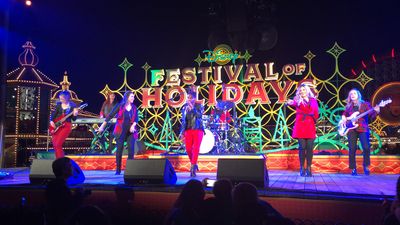 The latest holiday musical offering is the Pop-Rock sounds of The Suffragettes. Photo by Todd Pickering.

Alongside ¡Viva Navidad!, Mickey's Happy Holidays, World of Color-Season of Light and the ever changing groups at Paradise Garden Bandstand, there are seven bands performing at Disney California Adventure that represent different holidays.

The Festival of Holidays is a great blend of food and music representing all of these holidays mentioned. The idea is to grab a drink and a bite and then listen, sing, and dance along to these great offerings. It seems more than ever the groups are cross promoting each other and really inviting everyone to enjoy the diversity that makes up Southern California and even our planet.

Disney California Adventure has made this easy on you if you want to catch all of the groups as they are all within very close proximity to each other. If you finish a show and see that another one is starting you needn't worry as the next group is just steps away. The Suffragettes and Phat Cat Swinger respectively alternate nights on the Palisade Stage with one long set. The Suffragettes currently performing three nights and Phat Cat Swinger performing four nights. Blue 13 Dance Co. performs on the same stage in the morning and afternoon and The Sound takes over for the later afternoon. The showtimes are usually on the Disneyland App but today the Mariachi Divas and Toy Drummers were not listed even though the paper copy of the Entertainment Schedule lists them. The Palisades Stage is in Paradise Gardens Park and may be listed both ways. It is a bit confusing but don't worry if you are unsure as to where these stages are just ask a cast member and they will direct you to the proper place as they are all near each other.

Blue 13, The Sound, and Toy Drummers all start in the late morning and Mariachi Divas and Mostly Kosher start in the afternoon and perform right up until the evening concert by one of either Phat Cat Swinger or The Suffragettes. So to break it down for you, the music begins at 11 a.m. and it goes until almost 8 p.m. That's nine hours of non-stop music!

Because it's Diwali, Hanukah, Navidad, Christmas, and Kwanzaa! That's why. 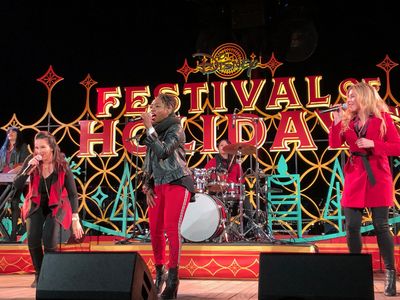 This trio of ladies with their high energy really knows how to work the crowd. Photo by Todd Pickering.

The Suffragettes are a new offering this year so this will be a little lengthier critique. The Suffragettes fall in line with the rest of the groups in the sense that they do not sing strictly holiday music so as to not inundate your holiday music intake. This allows for a bigger party and dance feel yet also throws in some holiday warmth by mixing it up. This is so welcoming considering that the malls are only playing holiday tunes, and by that we mean Christmas. The Suffragettes only play at night before the World of Color-Season of Light so they have a nice long 45 minute set. They are an all-woman band, which is very refreshing and completely adored by my dancing companions Zaida (age 9) and Hadley and Willa (age 8). The Incredicoaster was the goal for these young ladies and when we asked them at the 30 minute mark if they wanted to go ride it, they proclaimed they wanted to dance until the end of the set. Very high praise for The Suffragettes.

The band has a trio of very talented singers that take turns either singing lead or doing back up. This keeps the energy of the set very high. The brunette opened the show with a pop-rock version of "It's the Most Wonderful Time of the Year." Out of all the singers she had the most powerful yet clean voice. She made the high notes seem absolutely effortless and coming in on the pitch so smoothly and solidly. This is a singer with great control. The other ladies tended to slide and pop around the vocal range as that is rather au courant but never to the detriment of the song. All in all, the three really complemented each other and were so gracious to share the stage with each other. A big kudos goes to the the keyboard player for arranging the all women singer/songwriter medley in the middle of the show. They sang Cyndi Lauper, Aretha Franklin, Madonna, Whitney Houston, Dolly Parton, and Lady Gaga to name a few. Their attention to the crowd was just right and many people were dancing, young and old alike. The Suffragettes closed their set with "Rockin' Around the Christmas Tree" and Mariah Carey's "All I Want for Christmas Is You." Again the brunette hit such smooth notes on this finale that it might have made Mariah blush. 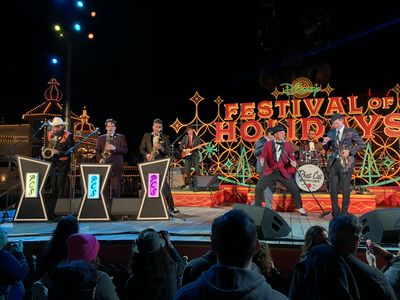 Last year with World of Color down Disney made a great decision to have Phat Cat Swinger on the Palisades Stage for evening performances and we are delighted that World of Color is back and so are Phat Cat Swinger. The band is fronted by Marco Polos on Saxophone who also sings. There was a new lead singer this year the night we saw the show and we think he was called Doug but did not see him on the band's web-site. He has the face of Stan Laurel and the frenetic energy of Mr. Jimmy Durante and fronts the band beautifully. The band mixes standard swing music, original compositions and of course many Christmas tunes. There were a handful of people swinging in front of the stage in full vintage clothing dancing to tunes like; "You Ain't Never Had a Friend Like Me," "Pure Imagination," and a very swinging "I'll Be Home for Christmas." Remember this band alternates with The Suffragettes so if you are at the resort for multiple shows you may be able to catch both bands. It is well worth your time. These two bands also bring a celebratory New Year's Eve feel to the Festival of Holiday. We highly recommend bringing your dancing shoes and kick up those heels.

Blue 13 celebrates Diwali in Paradise Gardens Park with Pixar Pier as the back drop. Photo by Todd Pickering.

Blue 13 Dance Co. brings the excitement of Bollywood to the stage and even teaches you some moves so you can dance along. The costumes are new this year with the bold primary colors of red, yellow, and blue to match the backdrop of Pixar Pier. Coincidence? We think not. The kids will particularly enjoy the story of how the prince defeats the demon bringing his beloved back home and inspiring this festival of lights that is Diwali. 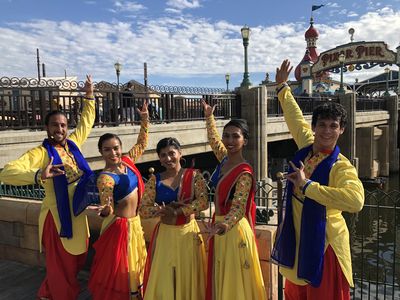 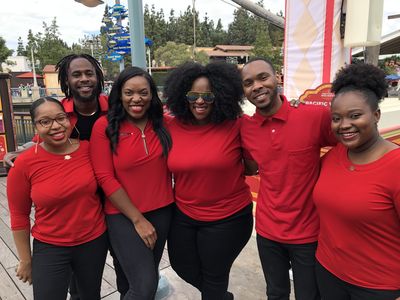 We got to see two different groups perform this year and both of them had very tight harmonies and great energy. This group sings traditional Christmas music like "The Most Wonderful Time of the Year" and a rap version of "Santa Claus is Coming to Town." One of their highlights is a medley with Stevie Wonder, Michael Jackson, and Whitney Houston tunes. They teach the crowd "The Electric Slide" dance if the kids and grown ups alike don't already know it. They end with a very powerful tutorial on the seven days of Kwanzaa naming all seven Swahili-inspired days in an upbeat chant that combines the African rhythms with R&B harmonies. Such a great cap to the show. 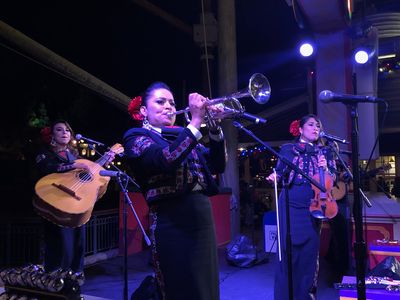 The Mariachi Divas know how to celebrate Navidad over at the Pacific Wharf stage. Photo by Todd Pickering.

If you have never seen The Mariachi Divas at Disney California Adventure you are missing out! They play all year round but do a show for Navidad. They sing in Spanish and in English. For Navidad they have lots of bells, which the kids really enjoy. They do a great medley of children classics done in mariachi style which consists of "Rudolph the Red Nose Reindeer," "Frosty the Snow Man," and "Santa Claus is Coming to Town." They end their set with the seminal classic somewhat overplayed José Feliciano tune "Feliz Navidad" but the crowd seems to go even more wild when they sing "Mi Burrito Sabanero" also known colloquially as the "Tuqui, Tuqui Song." We think it may be our new Spanish favorite holiday song. ¡Baila y Canta con las Mariachi Divas! 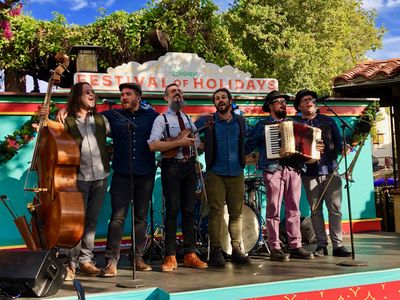 One of our favorites is back serving up some gorgeous Hanukah tunes with once again tight harmonies. We were very impressed how each group seemed to be trying to outdo each other yet promoting the multi-culturalism that makes this festival so special. Not to be outdone with the non-holiday this Gypsy-Rock-Klezmer band leads us through the amazingly diverse Jewish heritage all the way from Spain to the deep south of America with the blue grass tune "You Get a Line and I'll Get a Pole" or also known as the "Crawdad Song." Lead singer Leeav Sofer is not to be outdone on by his fellow groups and leads the crowd in an epic Jewish circle dance known as the Hora keeping the party and reveling aspect of this Festival going to the end. 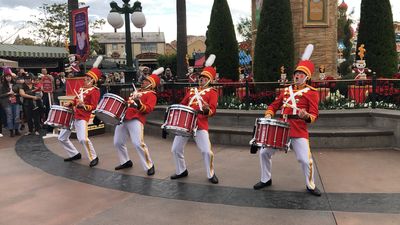 It doesn't matter whether you are celebrating Christmas or Diwali or Kwanzaa or Hannukah. Toy Drummers are beloved by everyone. Drumming is primal. Drumming is internal. Drumming is fun. This is a crowd pleaser for sure. 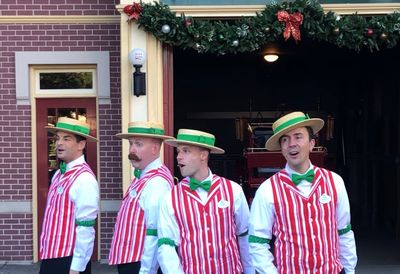 The Dapper Dans are singing their holiday set and dressed appropriately. Photo by Todd Pickering.

Just to be clear the bands over in Disneyland are ready for the holidays also. Many tunes are holiday themed especially from the Dapper Dans on Main Street U.S.A. and this time of year if you want "good ol' festive Christmastide" offerings there is nothing like the Dickens Yuletide Band complete with the oom-pah-pah of the tuba. Happy Holidays from MousePlanet whatever you are celebrating. 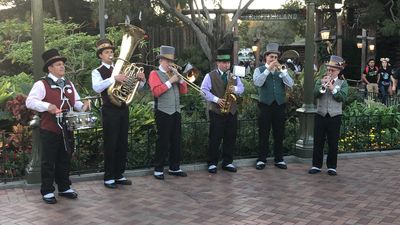 If you are seeking "Ye Olde Happy Christmas" check out the Dickens Yuletide Band. Photo by Todd Pickering.