I finally made it to Galaxy's Edge! After four-plus years of waiting, finally journeyed to Batuu this past Thanksgiving week, and got to see all that Walt Disney World's Star Wars: Galaxy's Edge at Disney's Hollywood Studios had to offer (grrrr—except for Rise of the Resistance, which hadn't opened yet—there's another trip brewing to take that one in).

I rode Millenium Falcon: Smuggler's Run with my family (I was a gunner), and it was amazing. I drank blue milk (which to my un-discerning palate tasted a little like a Sweet Tart milkshake). I spent $6 to buy a Diet Coke in a round bottle with the label written in an odd language (the soda tasted the same, but the bottle made it to the collectible shelf in my house). I didn't make it to Oga's Cantina or the Droid Factory (the line was too long at the first, and I held off on the second because my little nephew will be ready to build his own droid in about a year).

Mostly my family and I mostly just strolled around and took it all in. As you've all read 100 times by now, the theming of the place is absolutely incredible; Disney at its best. The weathering of the building and mountains, the blast marks on the facades, and the character interactions are all some of the best work the Imagineers have ever done.

Of course, me being me, I visited the Batuu Marketplace to see all the Galaxy's Edge swag. I'd originally planned to take you on a walk-through the shops in the marketplace. Truthfully, while the theming was, again, top notch just like the rest of the land, what I found there didn't particularly blow me away—until I hit my last stop: Dok-Ondar's Den of Antiquities. Once in a rare while, Disney develops a shopping experience so unique and so right that it needs to be shouted about—and Dok's was it… so that's what we'll focus on today. 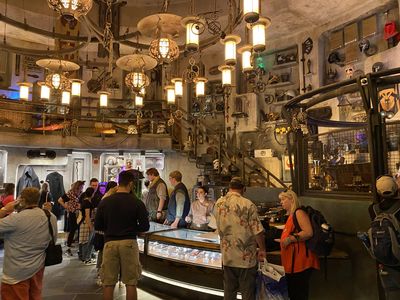 You walk into Dok-Ondar's and feel like you're shopping on another world. Photo by Gregg Jacobs.

In terms of the overall experience, the placemaking in Dok-Ondar's is literally out of this world. You walk into a room that's two stories tall, with walls lined with antiques and finds from around the universe, including an abonimable snowman, any number of storm trooper and bounty hunter helmets, figurines and various creatures. The best highlight of the decor is Dok-Ondar, himself—a pretty detailed animatronic that's constantly in motion. He's in a cubicle and always seemingly ready to make a deal. In this shop, you really feel like you're on another world that fits in so well with everything else that surrounds you in Galaxy's Edge. 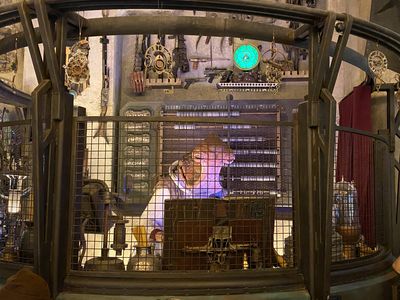 Dok-Ondar, himself, is there ready to give you a deal. Photo by Gregg Jacobs.

In terms of the merchandise selection, I'm going to give a weird shopping analogy. Are you familiar with HomeGoods, the discount furniture/knick-knack emporium (owned by TJX Companies, which also owns T.J. Maxx, Sierra Trading Post, and Marshalls) that's very easy to get lost in? What HomeGoods does really well is make you feel like you're on a treasure hunt. While everything they sell is surely mass-produced, it doesn't feel that way. Items are scattered throughout the store, often with no rhyme or reason, and the stock is constantly rotated, so it feels like you find something fun and new every time you visit. Dok-Ondar's felt like that to me. It's full of what must be mass-produced goods, but they seem unique all the same and are presented in a way that makes you feel like you've discovered something exciting.

For example, the first item I came across was a relief sculpture of Jabba the Hut, seemingly made from the sands of Tatooine. It was displayed in a glass case with a sign and a unique description of what it was. The sign read, "The piece, thought destroyed, was originally found on the sail barge of the gangster, Jabba the Hut". Fans of Return of the Jedi will readily get that reference. It is a unique item, and like all the best Imagineering creations, it comes with a backstory. 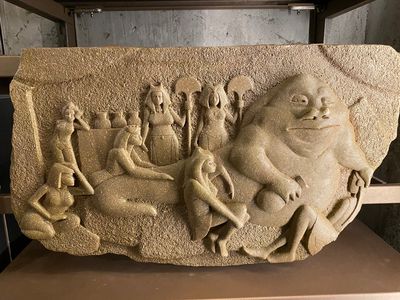 You can own a rare Jabba the Hut relic from Tatooine. Photo by Gregg Jacobs.

Yes, there were several of them on the shelf next to the display, boxed and ready to go home. But the whole story was all packaged so well, that it felt like something truly interesting. And it should be, at a pricey $160—but for die hard Star Wars fans, this is truly a find.

A similar item near the store's entrance was a "bronze" bust of Luke Skywalker. The bust depicts Luke in his older, new trilogy, years, and also comes with its own backstory ("Jedi Master Luke Skywalker's confrontation with Kylo Ren on Crait became a beacon of hope for the galaxy"). Like much of Galaxy's Edge and unlike the Jabba item, the bust's focus was on the new trilogy, rather than the original one. The bust will run you $130 and also features great presentation and packaging.

It's been well advertised that at Savi's Workshop, you can go through a theatrical experience and build your own custom lightsaber. I didn't experience this for myself, but was told they do make quite a show out of it, which for $200 is a good thing.

Dok's has its own lightsabers and experience. At the back of the shop, is a counter like you'd find in a fine antique store. There are glass cases filled with many different lightsabers at many different prices. Kylo Ren's "original" lightsaber is there, as well of those of lesser characters from the Star Wars universe. Adding to the fun are the helpful cast members behind the counter. They were spinning yarns about the sabers and Jedi lore for their customers, really adding to the fun and experience. The sabers ran from about $130 to $200. 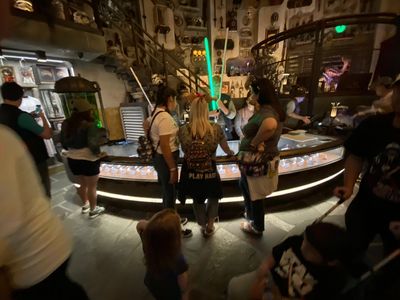 You can buy Kylo Ren's "original" lightsaber for $150 at the interactive light saber counter. Photo by Gregg Jacobs.

Another unique and magical item you can get at Dok-Ondar's is a Holocron, from either the Jedi (a cube from the light side of the force) or the Sith (a pyramid from the dark side). For a Holocron to work, you insert a Kyber Crystal (sold separately—and there are several available), and depending on the combination of Holocon and crystal, it lights up in different colors and plays sounds effects and different dialog from the films. You can twist and open it up like a puzzle to unlock other surprises. 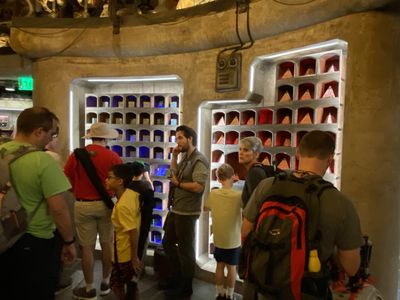 You can choose your magical Holocron from either the light or dark side of the force. Photo by Gregg Jacobs.

The Holocron goes for $50, and if you can't make it to Batuu yourself and have to have one, they're actually also for sale on Amazon.

In addition to these really unique and fun items, there are also items that at least somewhat break the bank. There are, fortunately, less expensive options for those of us who don't want to spend a fortune and are maybe more casual fans of the movies.

There are a number of "insignia" (patches) for sale from both the Jedi and Sith that will run you only a few dollars. Some more unique items on the lower end of the price scale are a $22.99 walking stick that is a spitting image of the one Yoda used in the original films (and for an old Star Wars fan, throwbacks to the original trilogy are always welcome) and a package of six storage capsules filled with Jedi food (think cool jelly beans). 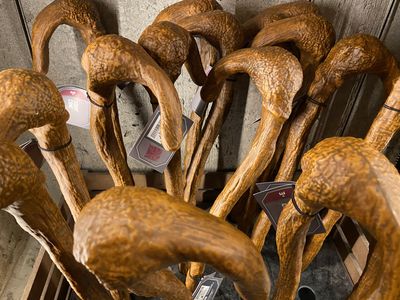 You can walk around Galaxy's Edge with Yoda's cane, a throwback to the original films. Photo by Gregg Jacobs.

So even if you aren't a buyer or big Star Wars fan, Dok-Ondar's is such a great experience, that you must go check it out. Disney is always at its best when Imagineers are let loose to do what they do best. They took what's basically a gift shop, and tricked it out to fit in so well with its surroundings. They created a truly immersive experience with some really inventive merchandise.

It's been another fun year at Mouseplanet and hope you've all enjoyed reading. I hope you're all have a great holiday season and wish you nothing but the best in the new year.