A while back I started a series of articles counting down my favorite things about individual Walt Disney World attractions. That series got sidelined while I talked about a lot of the newest and latest bits and pieces of Disney magic out there. The upcoming additions to Epcot, Star Wars: Galaxy's Edge, the final Illuminations and Disney+ and New York Comic Con have kept me typing away at the keyboard over the last few months. That said it's time to get back to my series on the best that the Walt Disney World attractions have to offer. It was way back in September when I counted down my favorite things about the Magic Kingdom's Jungle Cruise. Before that I hit most of the Magic Kingdom biggies; Space Mountain, Big Thunder, Splash Mountain, Pirates, Haunted Mansion just to name a few. I still haven't left the Magic Kingdom yet, and I've left one of my true favorites for last... or close to last at least.

Mickey's Philharmagic has been delighting guests at the Magic Kingdom since 2003. I remember on our first family trip that summer, the sign was fully installed, there was a coming soon sign out front, and we were quite curious about what was to come in the theater that formerly housed The Mickey Mouse Revue and Legend of the Lion King. The following summer we hit the show for the first time, and it was an immediate hit with my wife and I and especially our 5-year-old daughter Sam. We sat through Mickey's Philharmagic multiple times a day on that trip. My daughter was fascinated. It hit several soft spots for my wife and I, and turned out to be one of our favorite things to do when in Walt Disney World.

Mickey's Philharmagic broke some new ground when it opened back in October 2003. It was a rare occasion for the Imagineers to work hand in hand on an attraction with Walt Disney Animation Studios. Since this was essentially an animated film, and one that would be constantly viewed on the big screen on a daily basis, some of Disney's modern animation legends were brought in to work on the project. Let's remember that Philharmagic is a 3D film, full of 2D characters. The original animator of Ariel, Glen Keane, worked on transitioning her from 2D to 3D. Animator Nik Ranieri did the same for his Beauty and the Beast character, Lumiere. But the biggest deal was the attraction's namesake, Mickey Mouse. Mickey's Philharmagic marked the very first time that the beloved mouse was rendered into 3D, an animated milestone for sure.

I'm starting this countdown at the end, in the gift shop, Fantasy Faire. We all know I'm a sucker for a Disney gift shop. The truth is, it's not always just to buy stuff. Sometimes it's the decor or the details of the shop that draw me in and this shop is no different. It's got two of my favorite full size Disney figures anywhere in Walt Disney World. 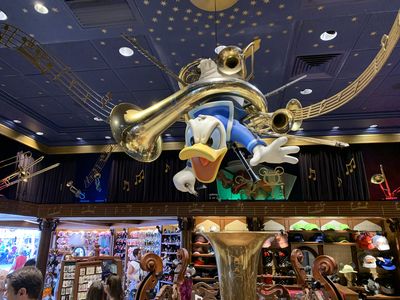 Donald doesn't look too thrilled as he's bursting through the ceiling of the Fantasy Faire shop in the Magic Kingdom. Photo by Chris Barry.

You can't beat the awesome looking Donald Duck who looks like he's bursting out of the ceiling intertwined with all of the musical instruments. My guess is that he's fairly perturbed that this attraction is named after Mickey Mouse and yet he is the main star. Mickey only plays a small role. 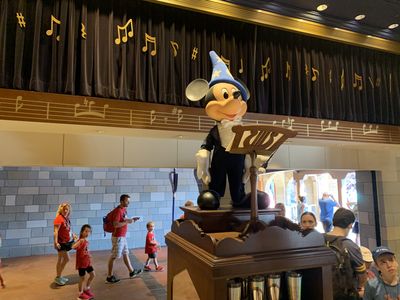 Mickey looks regal and classy in the Fantasy Faire shop in the Magic Kingdom. Photo by Chris Barry.

Given the attraction's name, there is an equally awesome Mickey figure decked out in a tux, his sorcerers' hat, and wielding the baton he uses to reign in the enchanted instruments from the film. Hang a right after you drop your 3D opera glasses in the bin and check out these classic Disney figures the next time you're leaving the attraction. They're worth a look.

I've been writing Top 5 lists for a long time here on MousePlanet and that's definitely the first time I mentioned a duck's backside in one of my lists. There's, of course, more to it than that. Anyone that's sat through Mickey's Philharmagic all the way to the end knows that animated Donald gets blown out of the tuba over our heads to the back of the theater. 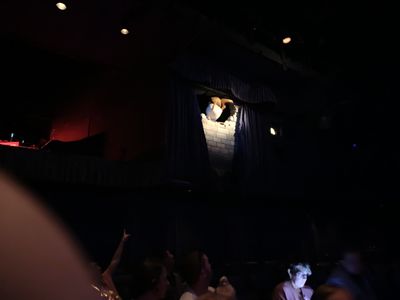 Donald breaks through the wall at the end of the Philharmagic performance. Photo by Chris Barry.

The savvy fans know to turn around and look for a full sized animatronic Donald - his rear half at least - stuck in the back wall of the theater. Donald let's out a few flabbergasted sounds and then we hear his trademark, "Uh-oh!" as he ultimately falls through the wall onto the other side of the room. It's a classic Disney attraction moment and one that always gets the kids howling.

One of the greatest things about Philharmagic is that there is seldom a wait. The theater holds a decent amount of guests and shows so many times a day that people get their fill and that keeps the lines at bay. One of the only downsides of this is that you tend to breeze through the lobby area and if you do, you're missing some really cool posters. 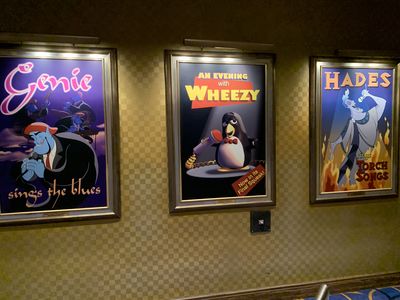 The posters in the lobby of Mickey's Philharmagic. Photo by Chris Barry.

Where else in Walt Disney World are you going to see anything featuring Willie the Whale from the 1946 animated short The Whale Who Wanted to Sing at the Met? Favorites like Aladdin's Genie and The Three Caballeros also have posters as does Hades and The Three Little Pigs. I have to say though, my favorite is Wheezy from Toy Story 2. One of my favorite moments in any Disney or Pixar film is at the end of Toy Story 2. After hearing Wheezy's squeaky voice throughout the film, we're treated to the legendary deep singing voice of crooner Robert Goulet performing his own take on You've Got a Friend in Me. If you grew up in the 1970s like me, it was a classic nod that the kids watching the film wouldn't get and I so appreciate them including Wheezy's poster in the lobby of Mickey's Philharmagic.

There are a lot of sentimental moments throughout Mickey's Philharmagic. It's got some of Disney's biggest characters and most endearing songs. Take a look at the list: Be Our Guest, Part of Your World, Just Can't Wait to be King, and A Whole New World. You can't lose with any of those. For me, personally though, it's the appearance of Big Ben, Peter Pan, and Tinker Bell that get to me the most. 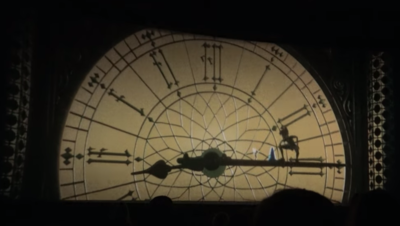 The best shot I could get from my favorite moment in Mickey's Philharmagic. Photo by Chris Barry.

I've seen this show dozens of times and yet, when Tink flutters out onto the screen and I hear the familiar notes of You Can Fly, I'm a big pile of goo. Peter Pan is my favorite Disney film and Peter Pan's Flight is my favorite Disney attraction. My wife is a big Tinker Bell fan and it suits her because they're both blonde and both have the same sassy kind of attitude. It's the moment in the film that I wait for the most and I'm always smiling ear to ear when it hits that point.

1 – Watching the Kids Trying to Catch the 3D Objects

I'll never forget taking little 5-year-old Samantha into Mickey's Philharmagic for the first time. She hadn't seen anything else like it, her being 5 and all. She knew nothing of 3D and what it meant. So, when the first objects come floating out onto the screen, she just instinctively reached out and tried to grab at them. 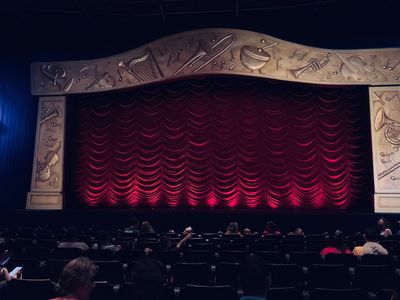 Keep a sharp eye out for kids grabbing into the air during Mickey's Philharmagic. Photo by Chris Barry.

It's one of those priceless Disney moments that you just adore as a parent. Your kid is buying into the magic hook, line and sinker and here's the proof; they're literally grabbing at the thingamabobs and jewels that Ariel throws out at them fully believing that if they try, they will catch one of them. Trust me. The next time you're in the theater, even if you're not with little kids, you'll inevitably sitting near some. Take your eyes of the screen and watch them desperately grabbing into thin air. It's positively heartwarming.

Keep in mind a few things when it comes to bringing very young kids to the show. While the show is pretty timid and appeals to kids of all ages, their very first exposure to the film can get some kids freaked out. My boys were a young 4 on their first visit and when all heck starts breaking loose and Donald is yammering and instruments are flying around I'm not sure if they were quite prepared. They got a little freaked. I'm not sure if they were worried about Donald or if they thought the 3D duck was coming off the screen to get them, but it took them a try or two to settle down and enjoy themselves. The sound system is also pretty amazing and that translates to really, really loud. Most kids handle it but don't be surprised if the real young ones have a moment.

What's not to love about this modern day Walt Disney World classic? It's filled with legendary characters. The 3D effects are wonderful. There's something for all of the senses. At 12 minutes, it's a good rest and respite from the Florida swelter. And all of it is set to a soundtrack of some of Disney's best and most beloved music. It's a win win on all counts. It's long been one of my family's must see experiences when we visit and I don't see that changing anytime soon.

That's all for this Top 5. As always, I'd like to hear what you have to say. Click on the link below, let me hear your thoughts on Mickey's Philharmagic and I'll see you next time with another Disney Top 5.