This past fall, my family and I went on vacation (shockingly not a Disney one), spending over two weeks on safari in Africa. We went to Kenya, Rwanda, and Uganda, and I say without exaggeration that it was a trip of a lifetime. The culture, the scenery, and most importantly, the wildlife, are all things I'll remember for the rest of my days.

This may seem an odd place to start an article at MousePlanet, especially from a writer that specializes in Disney shopping and merchandising—but seeing nature in all its glory actually made me think about the Walt Disney Company and its historical connection to nature. Also, how the Disney parks seek to simulate environments from around the world and offer goods from these places. So there is a Disney connection today, but let me warn you in advance that you'll be forced to look at a few of my vacation photos.

To start, Disney's connection to nature goes back to the early days of the company and to Walt Disney, himself. From 1948 to 1960, the studio produced True-Life Adventures, a series of films and animated shorts dedicated to nature and the animal kingdom (where I have heard that phase before?). The series earned eight Academy Awards during its run and included such titles as The Living Desert, The Vanishing Prarie, and White Wilderness. Walt was ahead of his time in promoting conservation, nature, and protecting the environment.

Getting with today's topic, there was also a film in the series called,The African Lion, which focused on the life of, well, an African lion, and how he existed and thrived within the local ecosystem. It was filmed over a 30-month period in Kenya, Uganda, and what is now Tanzania. 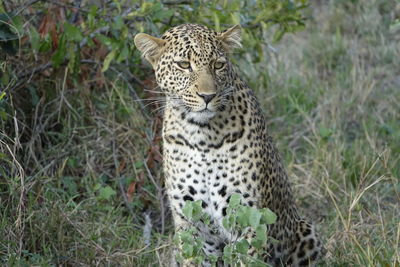 A gratuitous photo of a leopard I took on my Africa trip. Photo by Gregg Jacobs.

True-Life Adventures ended in the 1960s, but came back in a big way in 2007 with Disneynature, a new series of films that focuses on wildlife and their place in the world. Each film focuses on a different animal or ecosystem, and in true Disney fashion, tells a story. They focus on one or several specific creatures and tells a tale from their point of view. This narrative style keeps gripping the audience, and before you know it, you've learned something, too.

There are films in the series that focus on penguins, panda bears, chimpanzees, the Earth's oceans, and my personal favorite (watched on my flight to Kenya), African Cats, which told the story of two lion families and how they interact and survive in their habitat. These are available on Disney+ and I highly recommend you check them out.

Walt's love of nature wasn't restricted to two dimensions. Disneyland's Adventureland was created to be a living embodiment of the True-Life Adventures. The Jungle Cruise was your chance to go on one of these treks and visit the exotic parts of the world the films were meant to capture. It's also well known in Disney fan circles that the original idea for the Jungle Cruise was to use real animals and that Walt had to be talked out of the idea (think of all the poop!).

Like all good ideas though, just give them time—and in 1998, Disney entered the animal husbandry business in a big way by opening Disney's Animal Kingdom at Walt Disney World in Florida. This is your chance to have your own true-life adventure. Anyone who's visited that park knows how beautiful it is. Disney, doing what it does best, has painstakingly simulated the environments of Africa and Asia and gives its guests the opportunity to have close-up encounters with animals from all over the world (to all WDW visitors, especially given what's going on in Australia, please make sure to visit the easily missed kangaroos—they're located in what's basically a dead-end path at the base of the Tree of Life, near the Pandora entrance—you won't regret seeing these beautiful creatures). 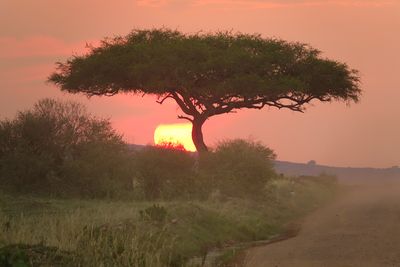 My niece said this sunset picture looked like it was from "The Lion King". Photo by Gregg Jacobs.

Everyone in my life knows I'm a Disney nut, so I have been repeatedly asked how the Animal Kingdom's depiction of Africa compares to the real thing. What I will say is that Disney did a great job. Harambe is a fairly accurate, if necessarily somewhat sanitized, version of African towns we visited. Kilimanjaro Safaris, the headliner attraction, where a guided Jeep takes you out on the savannah to see lions, giraffes, elephants, hippos and all kind of other animals, does an excellent job of capturing the feel of being on safari: the bouncing Jeep, the chatty driver, and up close and personal animal encounters. The ride has them all, but (dramatic pause) on a much smaller scale.

A good analogy is a visit to the Italy pavilion at Epcot's World Showcase. It has a great food and atmosphere and Disney did a faithful scale re-creation of Venice's Piazza San Marco, with the clock tower and the Doge's Palace. It's a wonderful place to hang out, grab a snack, and get a taste of what the real thing feels like. That said, it just can't compare to standing in the real thing with the pigeons flying around the plaza while the wind off the Grand Canal blows on your face. The pavilion is a great place to hang out, in and of itself, and gives a nice taste of the real thing—but it's not the same.

The same is true about Animal Kingdom and Kilimanjaro Safari. Disney's version is an incredible experience and one I've always enjoyed and will continue to enjoy. But a visit to Kenya and the Masai Mara National Reserve is that, times a thousand. I'll always treasure my Disney time, but I'll never forget the feeling of riding in that Jeep at sunset, bouncing along the road, with herds of elephants and wildebeests all around us, the savannah stretching around us for miles in every direction. [If you have any questions or want to hear me gush further about my trip, please feel free to leave a comment, and I'll be happy to talk your ear off. But let's get to the inevitable shopping part of the article.]

Disney has actually done a good job of re-creating the African shopping experience, too. While in Kenya, we visited several markets and a few artist bazaars/collectives. The collectives are a wonderful (admittedly tourist-trappy) places were local African artists can display their wares. The main place we visited was massive. It had hundreds of wood carvings, soapstone sculptures, paintings made from all kinds of natural materials (including banana leaves), hand-carved masks, and toys. 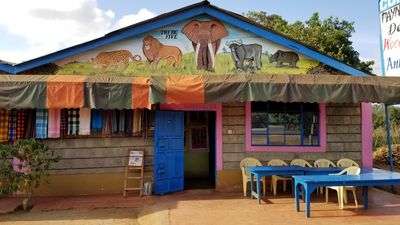 The entrance to one of the art collectives in Kenya. Photo by Gregg Jacobs.

The best part is how the artists get compensated. Local artists all contribute their works to the shop, and then all share in the proceeds from whatever is sold. Making purchases in the shop is a way of supporting the local community. Tourism has become a large part of the economy in Kenya and Uganda, so visiting (and buying) is a great way to have a wonderful cultural experience and to help the locals. 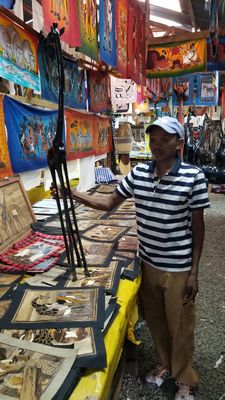 A helpful man in an African collective holding a four-foot-tall hand carved ebony wood giraffe that just may have found its way to my house in New Jersey. Photo by Gregg Jacobs.

Disney's setup isn't quite the same, but they actually did do a pretty good job of simulating the experience and offering authentic goods. The two main locations where these are available are Animal Kingdom's Mombasa Marketplace in Harambe right near the safari (I wrote an article about the shop a while back) and Village Traders in Epcot's World Showcase. 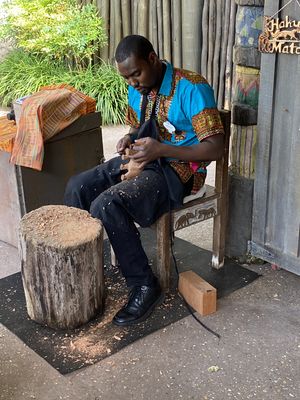 A craftsman working on an intricate wood carving at Epcot's Village Traders. Photo by Gregg Jacobs.

Mombasa Marketplace is more of a typical Disney gift shop, though one that is very well-themed, especially on the outside. Inside the shop, they have a great selection of smaller animal wood carvings (giraffes, elephants, tigers, and so on) and hand-crafted musical instruments.

Outside the shop, in my humble view, is where the real treat is. It's a mess—and I mean that in the best possible way. You come off the safari and see a mish mosh of "stalls" set up around the perimeter of the building, each with different things for sale. I'm sure there's a Disney method to the madness (there usually is), but it felt very chaotic, and a little like the similar markets in Kenya. 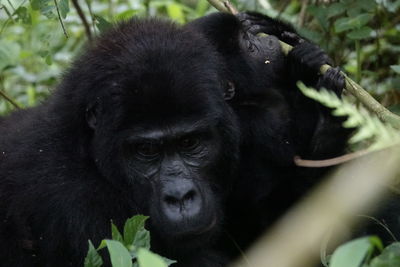 A mama silverback gorilla with her baby in Uganda's Bwindi Impenetrable Forest. Photo by Gregg Jacobs. 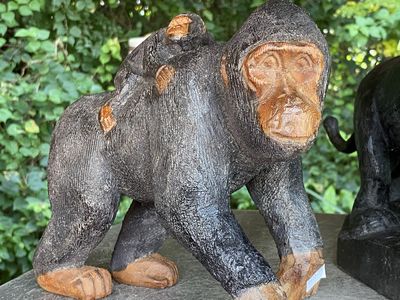 A wood carving of a gorilla with her baby available for sale at Epcot's Village Traders. Photo by Gregg Jacobs.

There are, of course, the usual plush and puppets for sale, but also beautiful wood carvings and sculptures, some of them very large. The price ranges on the pieces have a fairly wide range. You can get a small animal sculpture made of different kinds of wood or soapstone (made of a soft rock, mainly made of talc, that comes in many different colors and has the feel of soap, hence the name) for as little as $15 or so. The larger and more intricate pieces can run into the thousands. A really fun aspect of visiting is watching a cast member artisan at work, actually carving wooden animal figures. They're happy to demonstrate how it's done and answer questions.

Village Traders at Epcot is very similar in setup. The atmosphere is that of a thatched hut with different rooms and sections. They also have displays set up with sculptures and signs. There were also some beautiful hand-carved wind chimes, walking sticks, and toys. 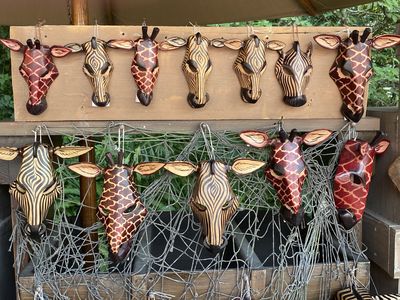 There are some beautiful hand-carved wooden masks at Village Traders. Photo by Gregg Jacobs.

I found my favorite items here. There was a hand-carved wood sculpture of a mom elephant walking with her baby. It was maybe a foot long and six inches high. It sold for a steep $300, but was truly one of a kind. I wanted to buy it, but was reminded about the pricey four-foot-tall giraffe I just bought in Kenya (see picture above). There was also a wooden gorilla with her baby that was smaller that cost $100. 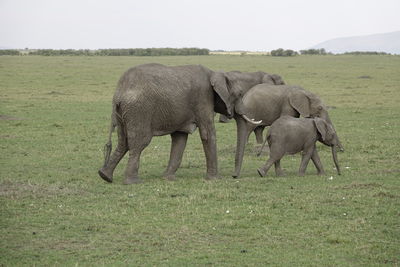 Here's a mom elephant with some babies. Photo by Gregg Jacobs. 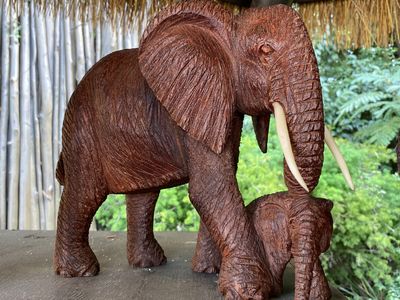 You can get a striking wood carving of a mom elephant and child at Epcot's Village Traders. Photo by Gregg Jacobs.

If you want one of these handmade items at a lower price point, they sell small soapstone sculptures in the shapes of many different animals that run about $25 each and are very similar in price and style to gifts I bought for family while over there.

I asked the cast member where the items for sale came from, and he said they were mostly imported from Africa from art collectives not that different than the one I visited. So if you buy these, you're not only getting genuine artwork from a different part of the world, you're also helping out some hardworking artists in East Africa.

What I learned is that Disney does a very good job of giving a taste of different experiences from around the world. That goes for both attractions and merchandise. Short of going on an African safari (but please go if you can!), I highly recommend a visit to Disney's Animal Kingdom, Mombasa Marketplace and Village Traders to get a taste of the real thing and get some great items.

That's about it for this month. You learned a little about African imported goods at Walt Disney World, and I got a mass audience to look at some of my vacation photos. I would love to hear about some of your trips to places that Disney has re-created and how they compare to Disney Parks visits. Thanks for reading and see you next time.