Welcome back to another Disney Top 5. It's only been about 5 months since I've been to Walt Disney World but I have to admit, I'm getting a little antsy already to head back. The summer discounts have been released and they've got me thinking it might be a good idea to put something on hold. There's no better feeling than knowing you've got your next Disney vacation booked and you've got something big to look forward to. This spring our twin boys will graduate high school. When their older sister graduated a few years back, we wanted to take her on a trip that summer before she went away to college. She chose the Caribbean. I can't complain about that particular choice, but I'm wondering whether or not the boys will say, "Disney, please," if we offer them the same choice before they head away to school in the fall. Of course, I'm secretly pulling for Disney, but it will be their choice and as long as we're all together as a family, all will be right in our world.

If they do choose Walt Disney World, we will definitely be spending some serious time in Galaxy's Edge. We had our appetites whetted this past fall, but since that trip, Rise of the Resistance has opened and we can't wait to take that journey and make our Star Wars universes complete. Aside from the new stuff, as always, much time will be spent enjoying the classics that we have grown to love over the years. One of those favorites is relatively new to Walt Disney World: the Seven Dwarfs Mine Train in the Magic Kingdom's Fantasyland.

I can remember back in 2012 when the first wave of New Fantasyland opened with Under the Sea and the Beauty and the Beast themed areas, you could see the groundwork being laid for the new Seven Dwarfs attraction. We weren't all that happy about the fact that Snow White's Scary Adventures closed down. Despite being a little dark and scary for the little ones, we considered this a Magic Kingdom classic and hoped it would be around forever. The glimmer of hope was this huge tract of land in the middle of Fantasyland that we watched grow and morph into the Seven Dwarfs Mine Train. I always thought it was an unusual move to leave this major piece of the new expansion unfinished until the end. Let's not forget it was almost two years after Ariel, Gaston, and Belle moved in to Fantasyland that the Seven Dwarfs officially opened in May 2014. Was it worth the wait? Let's find out with my Top 5 reasons to love the Magic Kingdom's Seven Dwarfs Mine Train.

5 - It's the Perfect First Coaster

Some may argue that Goofy's Barnstormer is the perfect first Disney roller coaster for the young ones and I can't really argue with that. The Barnstormer is technically a coaster and it's about as tame as you can get. However, despite the awesome Disney theming, the Barnstormer is kind of like a carnival roller coaster. As I said before, it's tame. It doesn't go all that fast and the ride is over with before you know it, clocking in at just under one minute. Not to say it isn't fun, it is. But Seven Dwarfs is a big step up. 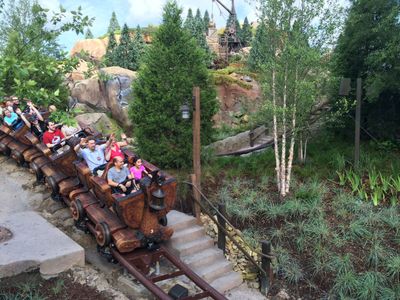 The Seven Dwarf Mine Train plummets down one of its drops. Photo by J. Jeff Kober.

It's the perfect first roller coaster for kids and the ideal way to get them ready for coasters like Big Thunder and Space Mountain. The biggest selling point would have to be that it isn't all roller coaster. A big chunk of the attraction's experience, as you travel through the mine, is essentially a classic Disney dark ride. The Mine Train is a hybrid and that's a great selling point when you're trying to get your kids to graduate to bigger attractions. The drops aren't so big. It's not crazy fast and it's basically got a dark ride sandwiched in the middle. It should be an easy sell.

I think it's a fair statement to make that perhaps the most unsung heroes of Disney Imagineering are the folks that specifically handle attraction rockwork and landscaping. Sure the technical and design crew come up with the story and mechanical details of the attraction, but then they hand it off to the landscaping crew to totally define the environment that the attraction is going to live in. 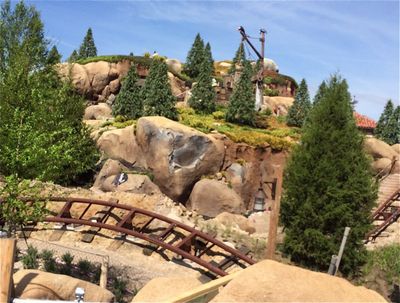 The grasses, meadows, rocks and stones of the Seven Dwarfs Mine Train. Photo by J. Jeff Kober.

I realize that it's an obvious statement but you have to consider that the hills, rockwork, waterfalls and gardens of the Seven Dwarfs Mine Train are all entirely fabricated. It's an extraordinary accomplishment and looks completely natural. You're also able to walk entirely around the attraction which is something not too common in Walt Disney World, so the Imagineers really had to do a thorough job of creating an entire 360 degree landscape for the guest to experience. It was wonderful to watch the mountain grow out of nothing and then, over the course of almost two years, watch the landscape fill in. It's a beautiful sight to behold and the Imagineers responsible for carving this landscape out of cement and wire need to be applauded.

The Imagineers really hit it out of the park when they designed the two major queues in New Fantasyland, Under the Sea and Seven Dwarfs Mine Train. Both are stunningly beautiful and richly detailed, but it's the Mine Train that offers just a little bit more to the guest stuck in the perpetually long lines. The gardens, the rockwork, the cottage, and the lighting are all top notch. And then, once you get inside, you have a number of activities to choose from to distract you from the fact that you've been waiting in line for an hour or more. 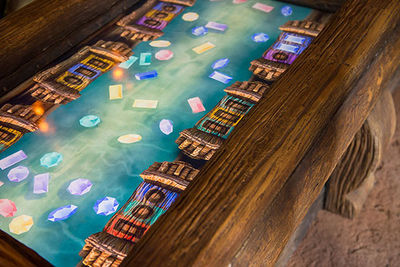 The interactive game that allows visitors to "mine for jewels" while in the Seven Dwarfs Mine Train queue. Photo by Disney Parks Blog.

There's the gem sorting game, the barrels that cast reflections on the ceiling above you, and my favorite, the musical spigots carved into the shape of woodland animals. All of it is built into a structure that combines the look of rustic, rough hewn timber on the outside and expertly crafted rockwork once you go inside the mine. It's one of their best queues to date and that's saying something.

One of the truly wonderful surprises of the Seven Dwarfs Mine Train comes at the end of your ride. Right before you pull into the loading area, you're treated to a classic scene from the film. Snow White, the Dwarfs, some forest friends and, of course, the Quicked Ween...I mean the Wicked Queen in the Seven Dwarfs' cottage. 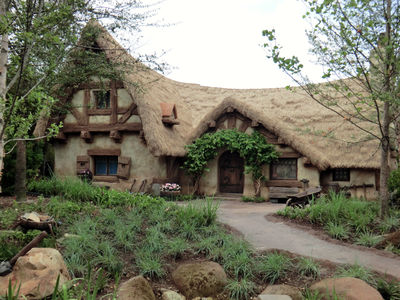 The Dwarfs' cottage along the exit of the Seven Dwarfs Mine Train ride at the Magic Kingdom. Photo by Adrienne Vincent-Phoenix.

It's a definite nod to the original Snow White attraction, Snow White's Scary Adventures, which existed just across the way in Fantasyland which featured a similar scene. It's hard not to smile as you watch Dopey and Snow White dance in the cottage to The Silly Song (The Dwarfs' Yodel Song.) It's the perfect way to end the ride and I'm always thrilled that they included this homage to the film and to the classic attraction.

I have to say, the dark ride segment of Seven Dwarfs Mine Train makes it all worthwhile. This is Disney at its best. The animatronics are amazing. One of the reasons why it purportedly took so long for this ride to open was the time it took for the Imagineers to perfect the animatronic dwarfs in the mine. There movements are stunningly fluid and they all feature 3-D animated faces and body parts. It's fantastic technology. I wasn't sure about how it was going to look when I first read about it years ago, but I was pretty floored the first time I rode through the mine. They look incredible. 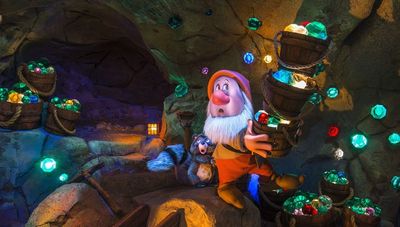 Bashful has his hands full in the Seven Dwarfs Mine. ©Disney.

Add in the beautiful multi-colored jewels strewn throughout the mine walls, ceiling and floor and you've got one heck of an environment. I'd easily say it's one of my favorite attraction rooms in all of Walt Disney World. For me, personally, the real treat occurs as you begin your climb out of the mine to the tune of their famous song, Heigh-Ho. You see the silhouettes of the dwarfs on the wall as they march home from work just like they did in that famous scene from the 1937 masterpiece. It's my favorite moment in Fantasyland, and one of my favorites anywhere on Disney property.

After 5 years of operation, the love for Seven Dwarfs Mine Train doesn't seem to be ;waning. The attraction is still one of the toughest FastPasses to acquire and wait times quickly jump to an hour as soon as the park opens and stay that way or longer throughout any given day. There's good reasons for this. It's one of the most family friendly rides in the park, and by that I mean total family friendly.

By comparison, an attraction like The Many Adventures of Winnie the Pooh just across the way is obviously family friendly, but there are some thrill seeking older siblings and parents as well who have no interest in Pooh and his pals. On the flip side, Seven Dwarfs Mine Train can please just about everybody in your crew. It's great for kids. It has just enough thrill in it to make the adrenaline junkies happy, but not too much to scare off the timid. The coaster enthusiasts appreciate the unique swaying aspect of the mine cars, the first ones in the world to do so when it opened in 2014. Given the classic stature of its characters, it has tremendous appeal to the die-hard Disney fans, yours truly included. On top of all that, it's just darn good fun, so it's no surprise just how popular it's been since opening day and it doesn't seem to be slowing down anytime soon. It's a rope drop attraction in the Magic Kingdom and I anticipate it will be for a long, long time.

That's all for this time. As always, I'd like to hear what you have to say. Click on the link below and share your thoughts on the Seven Dwarfs Mine Train and I'll see you next time with another Disney Top 5.