The previous season of The Clone Wars first aired this month back in 2014 as part of "The Lost Missions" that continued the adventures of Ahsoka Tano, Anakin Skywalker, and Obi-Wan Kenobi but did not bring it to a conclusion. This left fans wondering what was to become of our heroes in the midst of a galactic war. When Disney acquired Lucasfilm there was hope we would finally see the true end of the story and well, now we're here! 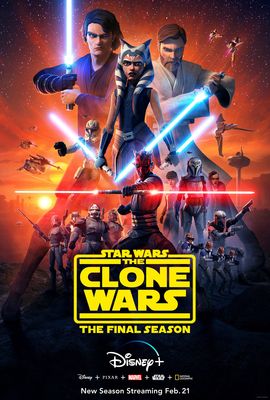 The new seventh and final season of The Clone Wars begins tomorrow, February 21. I've followed a few people online who have been rewatching the entire series, including StarWars.com's own Kristin Baver who chronicled her and other staff's rewatch on the official Star Wars website. Now that all the episodes are on Disney+, I plan to do the same thing—but I don't think I'll make it in time for the premiere of season 7. I hope to get through them all quickly, though, and maybe have a report of my own next time in this column. For anyone wishing to get started on this new binge, this page at starwars.com offers many great resources, including introductory material for anyone unfamiliar with the setting.

Essentially, the series takes the word in the title ("wars") seriously. There are battles and skirmishes across many planets, all the while following the changing spirit of Anakin. The series also serves as a celebration of many things Star Wars, and expands on much of the lore introduced in the movies. It even dives into some stories about the Mandalorians, giving a little pretext from some of the same creators of The Mandalorian series. Star Wars has always had a tendency to tie all things together, and it's pretty cool to watch it link up. We may be waiting a while for more new content on Disney+ after this series, so it's a good time now to dive in and enjoy it again or experience it for the first time. It may feel that it starts slow, but when things pick up, you'll find yourself caught up in the characters and their struggles.

For some more information, check out the latest issue of Star Wars Insider magazine, which came out earlier this month, on February 4.

Aside from my own rewatch of The Clone Wars, I also plan, as the year progresses, to take a look back at Star Wars Insider and follow the history of the rebirth of Star Wars from the mid 1990s as the prequels were just getting a rough draft treatment from George Lucas. I hope it to be a very interesting retrospective at the state of the galaxy and the fandom at a time when there were only three movies in the saga (and a couple of cartoons—Ewoks and Droids, anyone?). 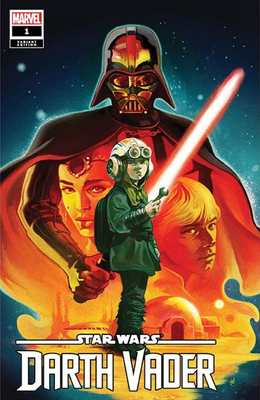 A new series on Vader has just begun and begins in a somewhat unexplored region of the timeline (at least in the new canon terms): events between Episode V The Empire Strikes Back and Episode VI Return of the Jedi. In Legends, some of this period was explored with promotions like Shadows of the Empire back in the day.

Now we're getting a different look at these pivotal events where Vader wasn't able to turn Luke Skywalker to the dark side and where he revealed himself as Luke's father. Perhaps it will explore his internal conflict that Luke points out when they meet later. Maybe they'll reveal how the Emperor devised his trap for the Rebels. I'm curious to see if Vader has any actions or dealings at his castle on Mustafar, maybe tying in events of The Rise of Skywalker like the holocron wayfinder. This sounds like a fascinating exploration of the character and the "in between" happenings so I hope to get a chance to check them out.

The Mandalorian end credit artwork from Chapter 5, "The Gunslinger." © Disney/Lucasfilm.

That sure feels like a long way off, but it isn't an entire year. The Mandalorian has been a great success as the first live-action Star Wars series and a way to create a selling-point for Disney+! It's a fantastic blend of sci-fi, action, fantasy, adventure-of-the-day, and an exploration of the creed of the warriors from Mandalore. We learn about the code of the Mandalorians, how they act, how they live, what they value, and how their ideals affect the main character who tries to embody those principles all the while fighting more than just stormtroopers, but his own sense of justice. It seems we've only had a taste of these concepts and more is to come.

The series is also just plain fun and easy to get into. With the prospect of the second season arriving near the holidays, there are some questions remaining from the series so far. At the end of Chapter 5, "The Gunslinger," for example, who is the mysterious figure out in the desert that approaches Fennec Shand's body? Could it be a bounty hunter we've known before? What will become of "the child" (or Baby Yoda, as we like to call him)? How did Moff Gideon obtain the Dark Saber (which is a connection to Clone Wars and Rebels)? What will the remnants of the Empire try to do? And what will our hero, the Mandalorian himself, have to do to protect the child? It's great to see this series take off on its own without relying too heavily on the primary saga.

Speaking of the primary saga, the next live-action series on Disney+ will indeed be one I've been anticipating. Confirmed this past August at the D23 expo, Ewan McGregor was finally announced as the start of a new Obi-Wan Kenobi series! It is a fantastic opportunity to have the actor return to his role from the prequels and give us more to his story between the times when he left Anakin for dead to when he set Luke on his journey.

Obi-Wan Kenobi last seen here at the end of Revenge of the Sith. © Lucasfilm.

The series is set eight years after Revenge of the Sith which is eleven years before A New Hope. So far they've only announced six 1-hour episodes but there could be more depending on the story they want to tell and if it is a success. The Kenobi series will be directed by Deborah Chow who has also already directed two episodes of The Mandalorian (chapter 3, "The Sin," and chapter 7, "The Reckoning") and will also be an producer on the show.

Unfortunately, we don't yet know when the series will debut. Filming was originaly set to begin this summer, but it's been delayed to January 2021. That may be a long time to wait, but it's more time for Chow and company to really develop the series and give it the focus it needs. I'm very excited for this series, mostly just to see McGregor in this role again, as was a great part of the prequels. At the same time, I really wonder what the story itself will explore. Will the entire thing take place on Tatooine? What will Obi-Wan be up to? In A New Hope, Luke describes him as, "a strange old hermit." I'm sure we won't just be following a reclusive old man in a desert. Some possibilities I see could be things like visiting Yoda to discuss their plans for Luke and Leia, tracking down any remaining Jedi after Order 66, and even perhaps another confrontation with Darth Vader. I'd love to see some more

One of the easiest and most fun sources of Star Wars news is The Star Wars Show on the official YouTube channel. The format of the show, however, has been changed to offer more in-depth content. The show itself is moving from a short, weekly program, to a longer, monthly program. Hosts Andi Gutierrez and Anthony Carboni will bring new episodes on the last Wednesday of every month. The news portion of the show will now be its own spin-off series titled, "This Week in Star Wars," hosted by Kristin Baver and available every Thursday.

I've enjoyed the show for its good source of official information in an enjoyable presentation. It is often campy and I appreciate that, plus they've had some great guests over the years. Gutierrez and Carboni have really grown on me and over time, their interviews have gone from good to stellar and I suggest you check it out. I look forward to the weekly news episodes and also the main show which will feature new roundtable discussions of Star Wars topics. Below is January's episode where they introduce the new format and roundtable, which should fill in the small holes of content this year. It will be interesting to see what topics they can cover with the longer format.

The Star Wars Show Changes Things Up, Plus We Talk With Gaten Matarazzo from Stranger Things. Star Wars YouTube Channel.

There's a lot to look forward to as we enter a new age of Star Wars where the nine movies are complete and new series stream to our TVs. Let's see what surprises lie in wait.