Epcot's International Festival of the Arts: A Photo Tour

Epcot is again hosting the International Festival of the Arts and we've been wandering the park in search of new and interesting things. While some things were the same, others were new.

We thought this year's International Festival of the Arts would be a challenge, considering all the construction underway at Future World. It's an interesting trek through the construction barriers as you enter the park and walk through Future World, but once you find Showcase Plaza, the Festival is in full swing. You'd hardly know anything was up.

While no one likes to spend time in a construction zone, it takes just a quick visit to The Epcot Experience at the old Odyssey building to see that it's absolutely going to transform Epcot into something new and exciting for the next century. 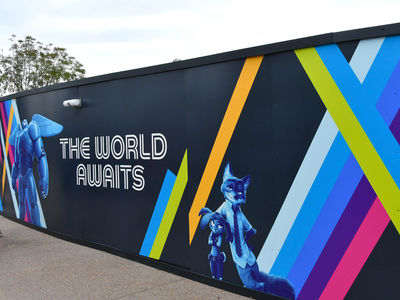 Epcot is very much a construction zone these days. The refurbishment project for Future World is in full swing with a flurry of activity. Still, the International Festival of the Arts is proceeding as normal, with no problems that we could see. Photo by Donald Fink. 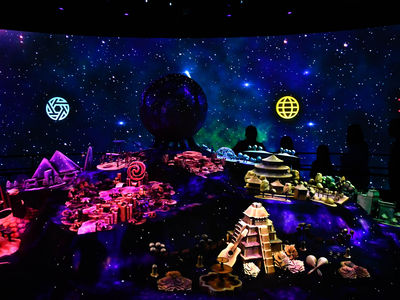 Do you remember the Odyssey Building? Now it's called the Epcot Experience. You can grab a quick snack there, but the real purpose is to give an immersive, 360-degree look at the future of Epcot. Photo by Donald Fink.

We know that the International Festival is first and foremost about the art, but it's also very much about the food. In addition to all the delights you can normally find around Epcot's World Showcase, the festival booths are brimming with specialty foods in snack-sized portions so you can sample your way around World Showcase. 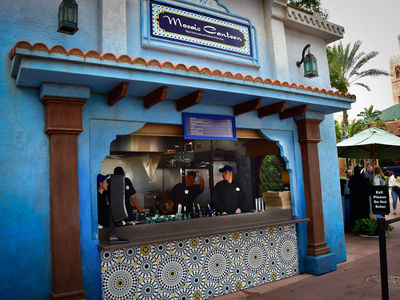 In Morocco, at the Mosaic Canteen, you can find spiced beef, flatbread, chebbakia, beer, and wine. Chebbakia, by the way, is dough that's rolled into strips and made to resemble a rose. It's coated with honey and rosewater, and sprinkled with sesame seeds. We didn't try it, but it looks kind of like a sweet pretzel. Photo by Bonnie Fink. 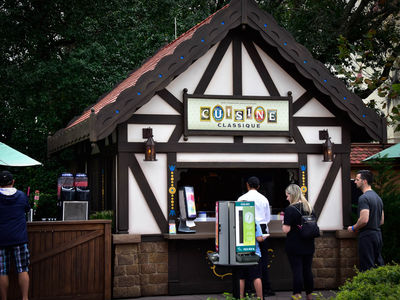 One place to find beef short ribs is the Cuisine Classique in Germany. You can also find Saint-Honoré tart, which is a caramel cream tart with caramel glaze, topped with cream puffs. There is also an Artist's Palette jumbo chocolate chip cookie, various hard ciders and ales, and a selection of wines. Photo by Bonnie Fink. 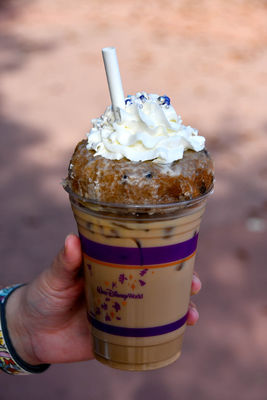 At the Joffrey's outlets, you can find an interesting pairing of latte and donuts. Here is the iced blackberry latte topped with a blueberry donut and fluffy clouds of sweet whipped cream and pastel sprinkles. This one is at the Joffrey's between Canada and the United Kingdom. Other Joffrey's locations have other pairings. There are four combinations throughout Epcot. Check your Festival Passport for locations. Photo by Donald Fink. 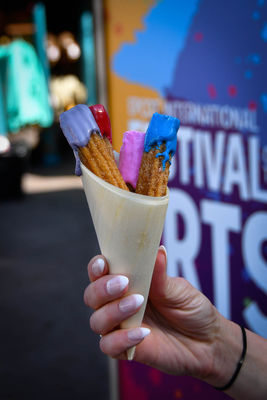 Paintbrush churros are at the Refreshment Outpost. They are three churros dipped in various colors of white chocolate. Photo by Donald Fink. 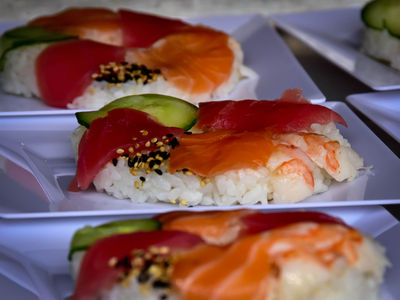 This is called a "sushi donut." It's at the Goshiki in the Japan Pavilion. Goshiki is located at the water's edge, near the Morocco side of Japan. The sushi donut has salmon, tuna, shrimp, cucumber sesame seed over a decorated plate of wasabi aioli, sriracha, and eel sauce. Photo by Bonnie Fink. 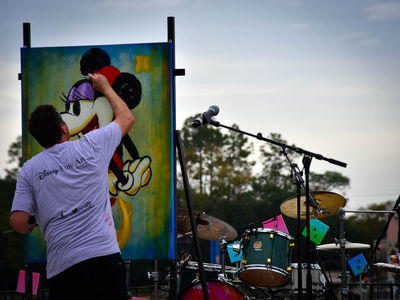 The stage at the Fountain of Nations is gone to make way for the new Epcot. This year, the performances that would normally be at the Fountain Stage are located at a new stage in Showcase Plaza. Here is Trevor Carlton with a performance of Visual Art in Performance, where he painted an original Minnie Mouse, choreographed to music. Photo by Bonnie Fink. 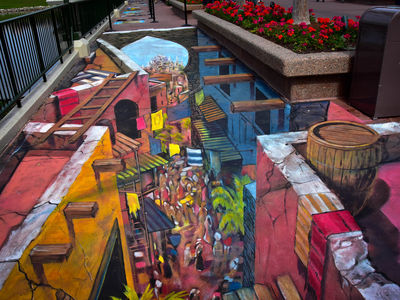 This year's chalk art is back in its usual spot along the walkway to Showcase Plaza. Here's a 3D photo op where guests can stand at various, precarious looking places for a picture. It doesn't look very convincing when you're standing there at the scene, but the photo certainly looks good. Photo by Bonnie Fink. 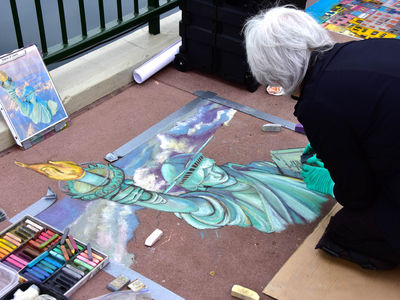 The street art in chalk is sometimes quite detailed. It's fun to watch the artists toil away at this temporary medium. The upside to it being temporary is that you can see new images every few days. Photo by Bonnie Fink. 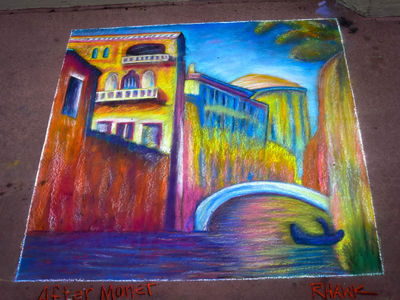 Chalk artists at Epcot's International Festival of the arts are the real deal. This is a piece called After Monet, by R. Hawk, a local Orlando Artist. On his web site, he describes his art as a form of Zen art. "You start with a blank sidewalk, create artwork and let nature (sometimes the festival) take it back to its previous state. Photo by Bonnie Fink. 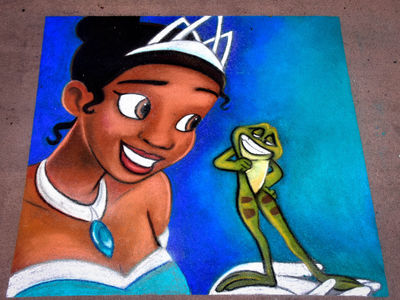 Here's The Princess and the Frog in the form of Chalk Art. Photo by Bonnie Fink. 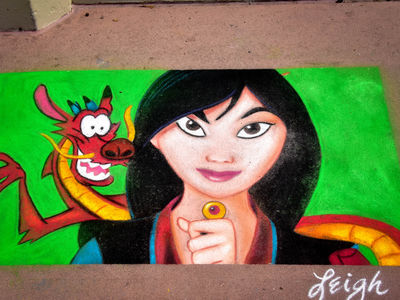 Another local artist is Leigh Alfredson. She has been making chalk art and teaching its artform for over 23 years. Here, she depicts Mulan and the dragon Mushu; an appropriate drawing considering the upcoming re-make of Mulan, in theaters on March 27th. Photo by Bonnie Fink. 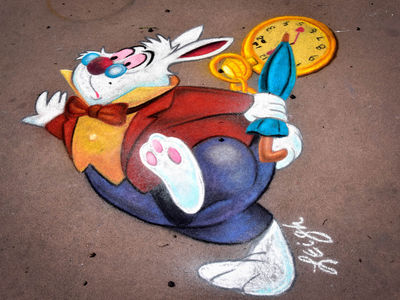 Local chalk artist Leigh Alfredson takes us back to Alice in Wonderland with this piece of the White Rabbit. Photo by Bonnie Fink. 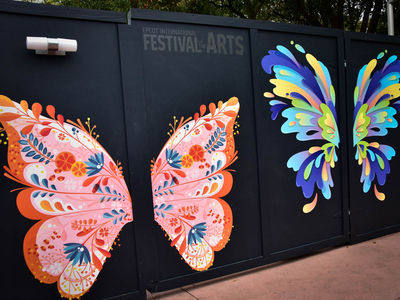 Construction panels are all around Future World at Epcot as Disney begins Epcot's renovation, but that's no reason to think it's boring or ugly. At a construction site near The Land, the panels have been decorated with butterfly wings. Positioned at various heights, these colorful wings make a perfect picture spot. Photo by Bonnie Fink. 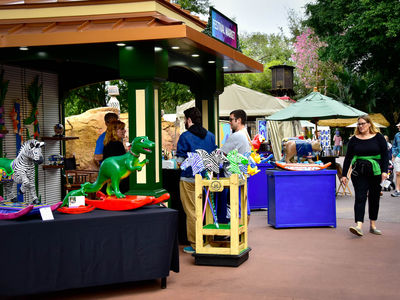 Along World Showcase, as you look towards Africa from Germany, you can see Festival Markets with many kinds of art. Whether or not you're buying, it's fun to see what's there. Photo by Bonnie Fink. 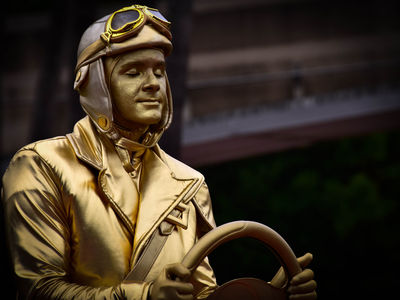 The Living Statues are back. They were typically found in front of the stage at the Fountain of Nations, but this year they are located in Future World East, near the new location for Mouse Gear. Photo by Bonnie Fink. 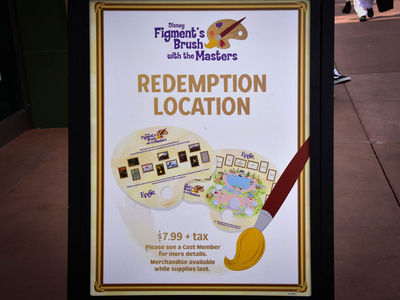 Figment's Brush with the Masters is a scavenger hunt for this year's International Festival of the Arts. The activity involves finding a painting in each of the lands along World Showcase, then placing them on the map. You can return the map for a prize at several locations around the park. Photo by Bonnie Fink. 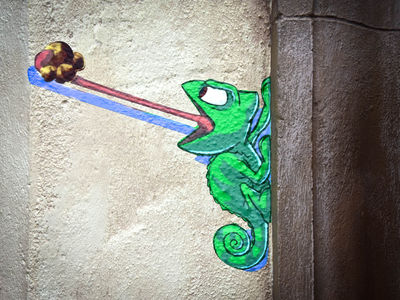 Throughout World Showcase, you can find chalk drawings tucked away in inconspicuous places. These are part of what's called Chalk Full of Character. They consist of various Disney characters, and for the ones we found, took a bit of investigating to spot them. Photo by Bonnie Fink. 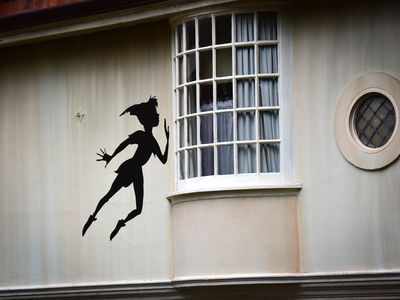 Peter Pan is part of the new Chalk Full of Character drawings around World Showcase. Look for these chalk art pieces hidden in the pavilions, usually off the beaten path. Photo by Bonnie Fink. 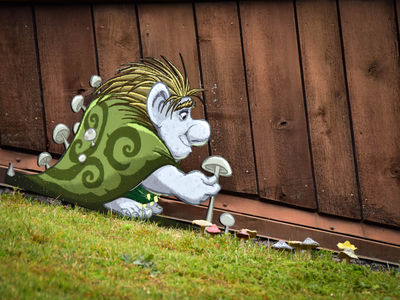 Here's a Troll from Frozen as part of the Chalk Full of Character collection. These fun characters are secluded in inconspicuous places in the lands around World Showcase. Photo by Bonnie Fink. 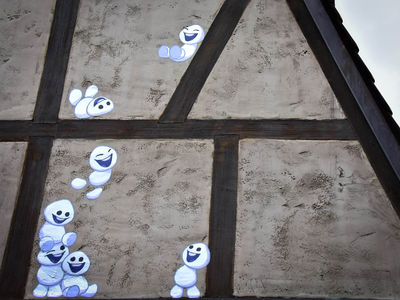 More Chalk Full of Characters in the form of Snowgles from Frozen can be found in Norway, along World Showcase. Photo by Bonnie Fink. 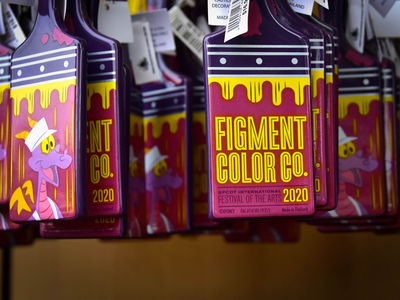 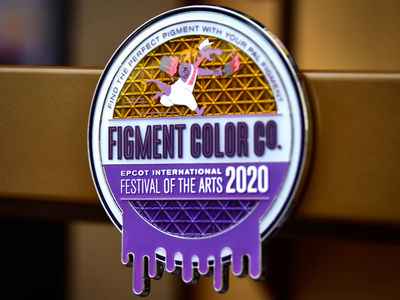 This is just a magnet, for use in any way you might think a magnet might be useful. It's a fun piece of merchandise. Photo by Bonnie Fink. 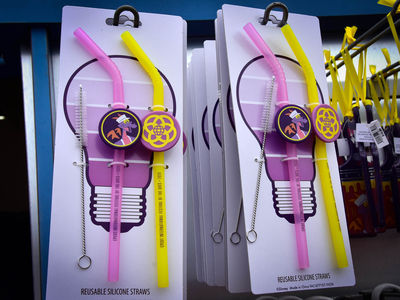 Here are some Figment-themed silicone straws. As you can see, they even come with a cleaner. Photo by Bonnie Fink. 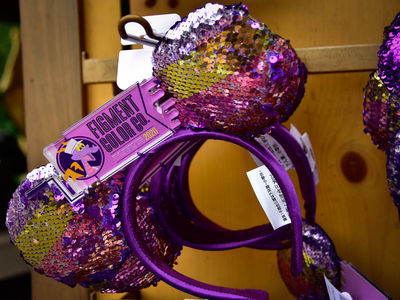 At Disney, you can find dozens of different ears. So much so that when we're driving around the greater Orlando area, we think nothing of seeing people in other cars wearing ears. We even occasionally see people wearing ears at Universal Studios. It's no surprise then that we found these Figment themed ears just for the International Festival of the Arts. Photo by Bonnie Fink.

It's not possible to mention or display everything that's available to do at one of Epcot's many festivals. There's so much to see and do at any of Epcot's festivals that the park can easily be a multi-day event.

It's also not possible for us to decide which of the several festival events that take place at Epcot are our favorites. As Disney fans, we enjoy them all.

One thing to mention about the International Festival of the Arts is that it happens at one of the best seasons of the year for Walt Disney World. It can get very hot here in the summer months, but during this time, the weather is usually reasonably mild.

Epcot has three official Festivals throughout the year. They are:

The effort made to bring the Holiday spirit to the park during the Christmas holidays is, in our view, another Festival in itself.

If you're thinking about coming to Walt Disney World, it would be a good idea to do a little research about these festivals and plan your trip based on the one that most appeals to your tastes. Epcot truly transforms into something more when a festival like the International Festival of the Arts is underway. 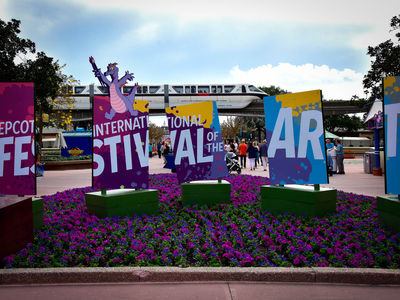 Usually, there's a great "exit" display as you leave Epcot during the International Festival of the Arts. This year, since the front of Epcot is fully involved in construction, we found our exit image on the entrance to Showcase Plaza. Photo by Bonnie Fink.