I wholeheartedly agree Indy. Snakes aren't for all treasure seekers but where would Disneyland Park's most adventurous attraction be without the giant, hot-tempered cobra coiled in a darkened corner ready to strike unsuspecting tourists? Welcome to Indiana Jones Adventure, set to celebrate 25 years next month. 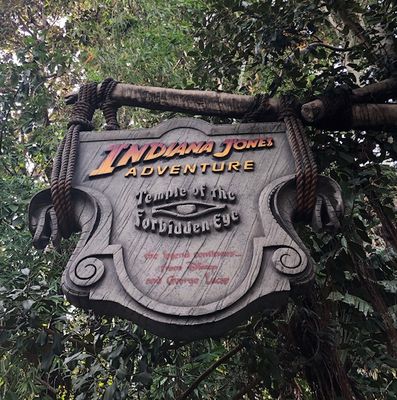 The Indiana Jones Adventure sign welcomes guests to the Temple of the Forbidden Eye. Photo by Todd Pickering.

Based on the wildly successful Indiana Jones action-packed films from the 1980s, co-writer and executive producer George Lucas collaborated with Disney to bring the dashing archeologist to Disneyland Park. (Lucas had already worked with Disney previously with Indiana Jones Epic Stunt Spectacular for Walt Disney World Resort, and on Captain EO and Star Tours for Disneyland Park.) Imagineers came up with the dark ride concept and it opened to the public March 4, 1995 after a soft-opening the day prior.

Indy was given a whole new adventure set in Adventureland, naturally. The scene was drafted that Dr. Jones was unearthing archeological artifacts in 1935 India underneath a sacred temple. Low on funds, Jones and his good friend Sallah began offering tours of the hallowed site for compensation. Legend told that Mara, the temple deity, would offer gifts to those who visited the site—earthly riches, eternal youth, or visions of the future. Tourists boarded vehicles then entered a chamber (Chamber of Destiny) in which Mara would declare which gift he had bestowed upon the vehicle. But, be forewarned, never look into his eyes, which of course is exactly what happened, thus unleashing Mara's wrath. 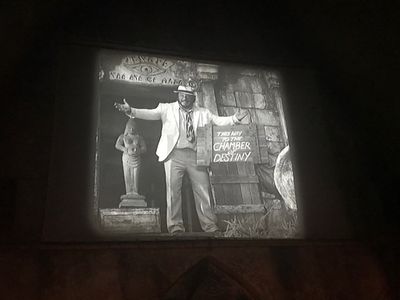 Sallah welcomes guests and forewarns them about deceiving Mara while exploring the temple. Photo by Lisa Stiglic.

Upon escaping Mara's rage, the vehicles make a mad dash to leave the curse behind. Cue the John Williams music. Long story short, the vehicles encounter skeletons, poisoned darts, rats, spiders, and, of course, snakes, through a circuitous underground cavern complete with giant skull rock. Indy saves the day at the final scene when a giant boulder threatens to smash the vehicles and all its occupants.

Disney Imagineers actually created the vehicles and its system specifically for the attraction. The Enhanced Motion Vehicles (EMV) are similar to a motion simulator, much like Star Tours, but with more movement. And the result is you feel as if you're part of the adventure—bumped shins, sore necks, and all.

Fun fact No. 1: Indiana spouts seven different lines to guests when the vehicle pauses at the site of Indy with the shattered boulder.

Almost 40 years after the release of the film that started it all and Raiders of the Lost Ark is still one of my favorite movies&helllip;well, non-Disney anyway. Suffice it to say, I was a little bit more than excited when this attraction moved into Disneyland. I was working The Disney Store in Las Vegas at the time and, let's just say there were a lot of 36-hour jaunts between Vegas and Anaheim to visit Indy (and Fantasmic!).

My favorite highlight of the entire attraction was—and still is—the queue. Best one in the Resort. Filled with secrets, traps, and Disney Easter Eggs, this queue makes even the most impatient guests want to bypass the FastPass option. Let's start with the parked truck. This Mercedes Benz diesel truck was actually used in the filming of Raiders of the Lost Ark. If you look closely the next time you are in line, you'll notice a pole topped with a golf ball on the front right bumper. This was used as a marker for the stuntmen during filming. I mean how cool is that? 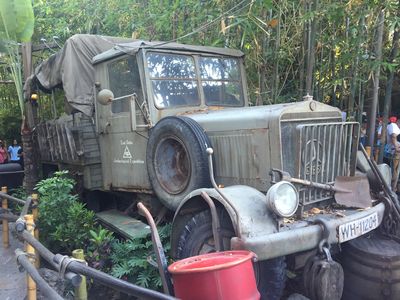 The famous prop sits in splendor next to the winding queue. Photo by Todd Pickering.

From opening day until 2002, AT&T sponsored the attraction. When you entered the temple, you were given a decoder card with the key to solving the Marabic alphabet which was sketched all throughout the temple. The backside of the card was AT&T's promotional campaign. The cards were fun to use while in the queue as you worked to decipher what was written on various walls. As the line moved throughout the temple, hidden booby traps came into play for unsuspecting guests. In the "spike" room, one of the bamboo poles flexes so when pulled or pushed, the ceiling "drops" causing alarm and panic for those unaware of the trick. This was my favorite to play on friends. Heh-heh. 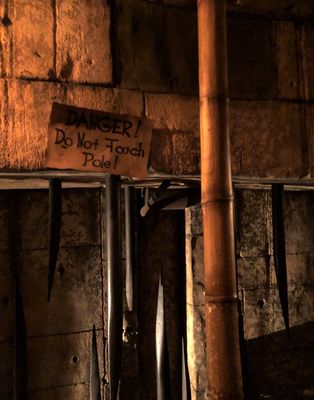 Pay heed to the warning signs while waiting inside the queue. Photo by Todd Pickering.

Next up, in the room where the black and while film is showing, there is a nod to the original Disneyland parking lot. Up in the rafters behind the line is one of the original Eeyore parking sings. Gotta love those Imagineers! The last booby trap I always enjoy is the well at the base of the stairs. A sign reads "DO NOT PULL ROPE," which means everyone pulls on the rope, much to the dismay of the archeologists down in the well as crashes and moans escape below. And for the eagle-eyed guests, various winks to Disney and Lucas are scattered throughout the queue, including a crate that reads "Deliver to Club Obi Wan" (the diner club featured in Indiana Jones and the Temple of Doom) and another crate is embossed with the number 990 6753, which is the box holding the Ark of the Covenant. 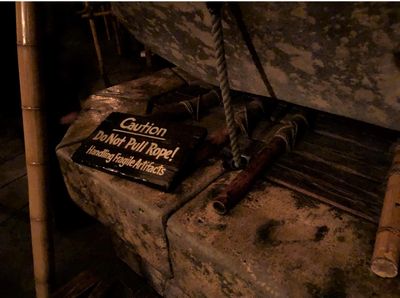 DO NOT PULL ROPE roughly translated in all languages reads pull on the rope. Photo by Todd Pickering.

"It's not the years honey, it's the mileage." - Dr. Indiana Jones

A quarter-century is a long time to be running around saving tourists but Dr. Jones has earned his rest. Look for the attraction to take a hiatus later this year for a much-needed refurbishment. But, before that happens, fans can gather to celebrate the milestone anniversary. At this writing, nothing has been released from Disneyland Resort regarding any actual festivities, but expect the park to offer some limited-edition merchandise for those of us who've ridden with Indy from day one. Look for the typical pins, T-shirts, and souvenirs. I vote for a Mara popcorn bucket or maybe a Holy Grail replica from Indiana Jones and the Last Crusade. At least bring back the Mickey fedoras. In the meantime, skip the FastPass at least once to enjoy the secrets of the queue, then hop aboard your reserved seat for yet another excursion with Dr. Jones. Just remember to watch out for those snakes!