I've been digging deep into all of my favorite things about each attraction at the Magic Kingdom for several months now. Every time I feel like I've covered it all, I come to the realization that there's still more to discuss. I've long said here on MousePlanet that the Magic Kingdom is the very heart of Walt Disney World, so I guess it's no wonder that there's so much to write about. Still, I've only got a few things left before I head on over to Epcot and start crafting lists honoring the best things about that park and its attractions. For now I'm staying in the Magic Kingdom. The one I'm going to talk about today is in Adventureland and it may very well be the most overlooked gem in the whole park.

Most guests in Adventureland are there for two reasons: they're on their way to Pirates of the Caribbean or they're headed to the world famous Jungle Cruise. I suppose if you have little ones you may be spinning around in circles on the Magic Carpets of Aladdin. If you're looking to cool off maybe you're waiting for the camel to spit some cool water on you or someone in your party is getting misted over by the tikis. I'm sure only the diehard Disney fans are there for the Tiki Room, which is a shame because it's a Walt inspired classic and good for some truly unique and quirky fun. And oh yeah, some people are just there for the Dole Whips and who could blame them for that really? But trust me Dole Whip lovers, if you're just there for the greatest frozen confection on Earth, you are missing out on something.

So what is it you're all missing? What are so many guests walking past on their quest to spot Jack Sparrow in that barrel or gaze in wonder at the back side of water? The answer, of course, is a bona fide Disney classic, the Swiss Family Treehouse. This Imagineering masterpiece has been inviting Magic Kingdom guests to climb among its boughs since opening day in 1971. It was preceded by the Disneyland version, which opened in 1962; the Disneyland attraction is now known as Tarzan's Treehouse after a complete retheming in 1999. The original treehouse is based on the live action Disney film Swiss Family Robinson, itself based on the classic 1812 Johann David Wyss novel of the same name.

Without any exaggeration and in my humble opinion, I believe that the Swiss Family Treehouse is one of the coolest things the Imagineers have ever constructed. It's not as massive as Animal Kingdom's Tree of Life. It's not as thrilling as Space Mountain. It's not Pandora or Galaxy's Edge as far as scope and scale. But if you're looking for an attraction that demonstrates the tried and true principals of Walt Disney Imagineering and by that I mean immersive storytelling accomplished through clever design in a richly detailed environment, then look no further than this Magic Kingdom treasure. Don't believe me? Let me make my case with the Top 5 things to love about the Swiss Family Treehouse in the Magic Kingdom.

The Imagineers have always been great at transporting their guests to faraway places through the use of music, details, and atmosphere. While Adventureland itself begins to transport guests either from the turn of the century American main street or the wild, wild west into the lush atmosphere associated with tropical climates, crossing the bridge over to the Swiss Family Treehouse succeeds in transporting you even further away from Adventureland's busy main thoroughfare. 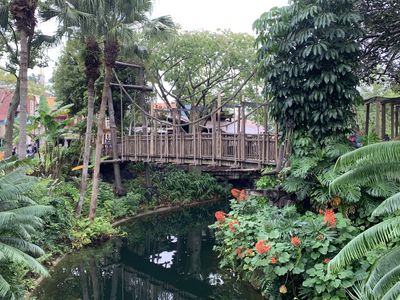 The entrance bridge of the Swiss Family Treehouse as photographed from the exit bridge. Photo by Chris Barry.

Once you cross over, things instantly get quieter as you get lost in the lush flora that surrounds you. The sounds of the waterfall lure you in and you realize, or more than likely you don't consciously realize, you've left the busy streets of Adventureland behind and you're someplace else. You're less than 100 ft from the chaos and yet you feel like you're a world away. The bridge at the end of the walkthrough returns you to Adventureland as you leave this story behind. Both bridges are expertly used bookends and are crucial elements to the whole transformative experience the Imagineers were going for. 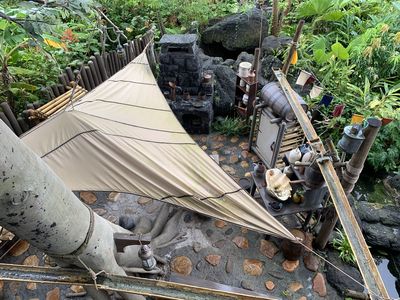 If you look closely you can see the water delivery system here in the Robinson family kitchen, which originates from the water wheel at the beginning of the attraction. Photo by Chris Barry.

You start out with it at the beginning, encounter it several times along the way, and its final destination is also your final room of the house, the kitchen. It follows you and you follow it. It's a very clever way of keeping something consistent and a brilliant piece of physical storytelling. Just about every guest I've ever seen making the trek up and down the 116 steps of the treehouse are constantly looking for the water troughs and pipes as they travel from the water wheel to the kitchen.

You'd be hard pressed to find a kid or an adult that doesn't simply love a treehouse. As a treehouse lover myself, I would therefore classify the Swiss Family Treehouse as the ultimate treehouse. My friends and I had a treehouse in the woods that someone else built and abandoned, I assumed, as they grew up. It was a floor with some railings, but it was the greatest place we had ever seen and it was our escape. Every time I walk through the Swiss Family Treehouse, I'm transported back to childhood and I'm insanely jealous that this amazing treehouse wasn't my own. I imagine my oldest friends Louie and Mike and I each claiming one of the bedrooms as our own and "moving in." 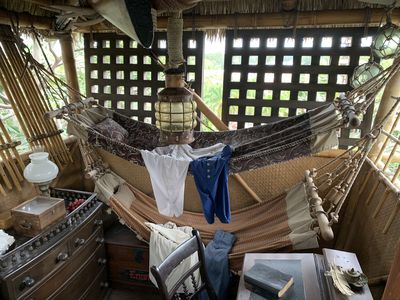 I would claim the top hammock here in the boys room of the Swiss Family Treehouse and be quite content. Photo by Chris Barry

Personally, I've always been a hammock fan, so I'd prefer the boys room with the hammocks. How cool would it be to camp out in the Magic Kingdom for the night way up high in the hammock room of the Swiss Family Treehouse. Admit it. You've thought about it. As a kid, I'd never want to leave. As an adult, I'm pretty close to feeling that way as well. A treehouse this awesome would be cool enough, but one with my own bedroom would be that much better.

Florida is flat, just about everywhere, and Walt Disney World is no exception. Down there, you don't get too many chances to get high up and have a view, especially in the theme parks. There's the incredible, albeit brief, view from the top of Everest in Animal Kingdom. There's a quick glimpse of the outside world before you plummet in The Tower of Terror. In Tomorrowland, just before and just after you spin around and around on the Astro Orbiter, you get a limited view of the park. But nothing in the Magic kingdom compares to the aerial view you get from the Swiss Family Treehouse. 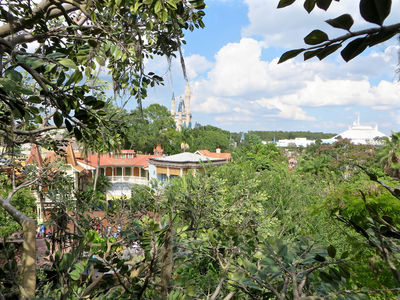 From high atop the Swiss Family Treehouse in Magic Kingdom's Adventureland, the Jungle Navigation Co., Ltd. Skipper Canteen can be seen as well as the castle and Space Mountain off in the distance. Photo by Alan S. Dalinka.

One of my favorite things about this attraction is arriving at the peak and looking out at Cinderella Castle and Space Mountain on one end and Splash Mountain and the Tiki Room building at the other. It's a one-of-a kind view and it's almost like a reward for walking up the five stories of the treehouse.

Just about everything in the Magic Kingdom that was there on opening day has changed and evolved over the years. Lots of things are gone like Snow White's Scary Adventures, the Keelboats, and the Skyway. Others are similar but have been updated like The Haunted Mansion, Dumbo, and the Hall of Presidents. The Swiss Family Treehouse is pretty much identical to the treehouse that guests experienced back in 1971. I did my homework on this and found that a small detail was added a few years back and it's a rather obscure nod to the original film. Just as you leave the kitchen you'll see what looks like a wooden chair or throne adorned with some flowers. 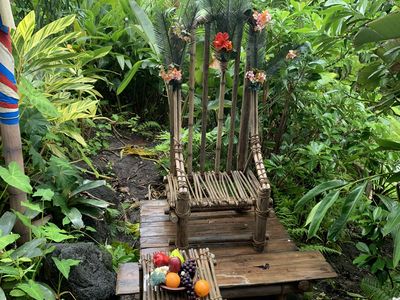 You can find a wonderful nod to the film in this wooden chair just past the Robinson family kitchen on your way out of the attraction. Photo by Chris Barry.

Turns out, in the film the Robinson family declare a holiday and to celebrate their holiday they stage a race. If you saw the film, you probably recall the children riding exotic animals. You probably don't remember the special chair that Mother Robinson sits in before the race. There's also a scene the night before of Fritz decorating said chair. (Much thanks to the folks over at the Parkeology website for defining this detail.) It's wonderful that there's someone on the Imagineering staff that thought of this and added it to the attraction. Aside from that small detail, the Swiss Family Treehouse is an opening day attraction in all of it's simplicity and old school glory. It's meant to be a step back in time to an 1812 novel and it turns out it's a step back in time in Magic Kingdom history as well.

There are plenty of folks out there who feel that this valuable chunk of Adventureland real estate should be bulldozed, a new attraction rising in its place. There are others, like yours truly, who would never want this Disney treasure to be touched. It's a beautiful spot surrounded by amazing tropical gardens and waterfalls. It's an incredible structural feat as well. Realize, of course, there's nothing real about this treehouse. It's all built out of steel and concrete and there's not a real leaf attached to it. Considering it's supposed to be a tree and that many of the structures are supposed to be built from pieces of the Robinson's wrecked ship, there's probably not a splinter of actual wood in the whole thing. The tree looks remarkably lifelike. It's chock full of details and it's completely unique in Walt Disney World.

It's a true classic and as much as I have no problem adhering to Walt's credo that the parks will never be finished and will always be changing, I'd love it if the Swiss Family Treehouse would remain just as it is. It should stand as a remembrance to a film that many Disney guests have, quite unfortunately, forgotten about and a tribute to the golden age of Imagineering when simplicity and rich details were more than enough to amaze guests. I always pay it a visit on every trip and always enjoy myself when I do.

That's all for this time. As always, I'd like to hear what you have to say. Click on the link below and let me hear your thoughts about the Swiss Family Treehouse and I'll see you next time with another Disney Top 5.