The last couple of months, I've taken you from the planet of Batuu to the wilds of Africa. Today, let's focus on somewhere a little closer to home: your feet.

When I was a kid growing up, long white tube socks—almost up to your knee—with two or three stripes on top were all the rage. In the years since, socks have gotten shorter, then longer, then shorter, then longer… They also went from light to dark, back to light, back to dark… you get the idea. One thing that was fairly consistent though, is that for guys, at least, socks were pretty boring.

Then in the last few years, something happened. Socks went crazy! People started wearing socks with all different colors and crazy, kooky patterns. I'm not just talking about casual socks that you'd wear hanging around the house or to a party. You see nutty dress socks in the office, too. In fact, the style in dress pants now is to wear them a little shorter so people can see your coordinating socks.

Whereas before, you'd only see socks varying shades of blue, black, and white, today you see red, purple, pink, and bright yellow. The drab solids of the past are also gone. Now it's any crazy pattern you can find. I've seen camouflage patterns, plaid, stripes of all shapes and sizes and even trippy socks with a pattern you'd find in a lava lamp. People are also now using their socks to express themselves and show their affinity for a certain concept, like a sports team, films or even a certain mouse.

Never a company to let pop culture trends pass them by, Disney has fully jumped on the sock bandwagon. You can go into pretty much any Disney Parks shop or visit ShopDisney.com and find a wide array of Disney socks, the subject matter being all corners of the Disney universe.

If you want socks with images of the Fab Five, they have them. If you're a Star Wars, Darth Vader and the Stormtroopers await you. If you like the parks, how about a park map on your feet? There's quite a variety. 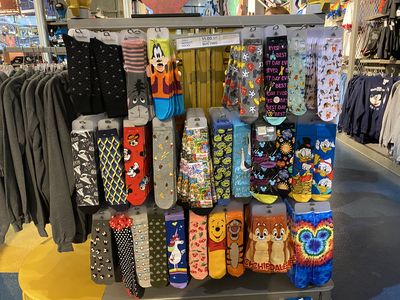 Socks at the Disney Parks come in a colors and characters. Photo by Gregg Jacobs.

I'm going to bury you in pictures today, because there's no way to let you see the color and breadth of these wearable souvenirs without letting you see them for yourself.

Let's start with the basics: Mickey Mouse and the parks. If you're a fan of the big cheese or the Disney Parks, there are many podiatric (is that a word?) choices. 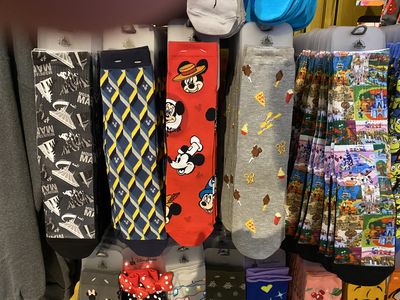 There are socks celebrating both Mickey Mouse and the Disney Parks. Photo by Gregg Jacobs.

There's a great set of socks with Mickey Mouse Club images and there are tons with abstract Mickey and Minnie pictures like tie-dye. 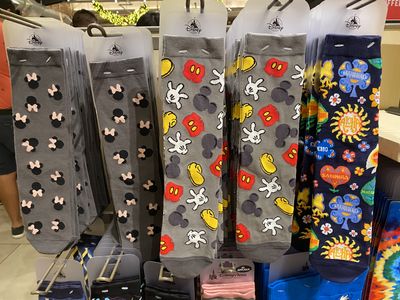 Mickey and Minnie have quite the sock assortment. Photo by Gregg Jacobs. 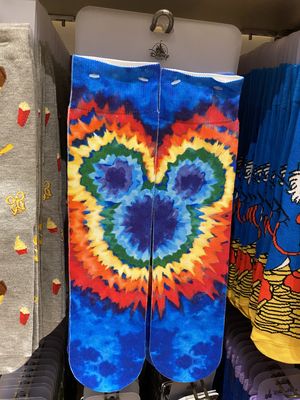 If you're interested in the parks, there's ton to look at here, too. I spotted socks celebrating Space Mountain, Disney's Polynesian Village Resort, the new Skyliner, Adventureland, and a really colorful pair that is loaded with a park map and icons. 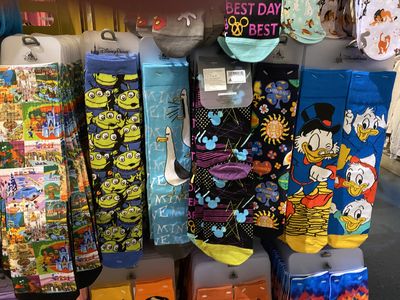 Disney socks can be very colorful. Photo by Gregg Jacobs.

For fan's of Epcot favorite character, Figment, there's a pink park of socks with his image, horns and all. 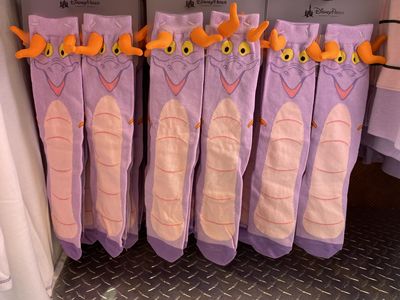 If you're an Epcot fan, check out these Figment socks. Photo by Gregg Jacobs.

If you're into Star Wars, there are several choices—but one that jumped out to me was a black-and-white coordinating pair with Darth Vader on one sock and a Stormtrooper on the other. 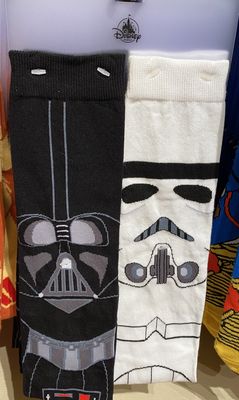 There's a great pair of "Star Wars" socks with Darth Vader on one, and a Stormtrooper on the other. Photo by Gregg Jacobs.

There are many Pixar choices, too, including the "Mine Mine Mine" birds from Finding Nemo, the aliens from theToy Story films, and Wall-E and Eve from Wall-E. 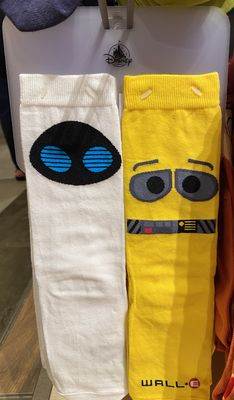 Check out this abstract pair featuring Wall-E and Eve. Photo by Gregg Jacobs.

In terms of price, the pairs of socks run a fairly standard $14.95. That said, they run specials quite often. The day I visited, they were running a special all over property: $22 for two pairs, or $11 each; not a bad deal.

They aren't hard to find at Walt Disney World, either. They had large racks at each of the main stores in each park (Magic Kingdom's Emporium, Epcot's Mousegear, Hollywood Studio's Keystone Clothiers and Island Mercantile at Animal Kingdom). They were also at World of Disney and in smaller shops all over property.

There's also a selection at ShopDisney.com, though a smaller one than I saw at Mousegear. One cool thing they did have on the website was a set called 12 Days of Socks, a set of a dozen adult socks with Mickey, Minnie and iconic park images.

You may be wondering what pair I picked up while I was there. Well, I went with a Disney Parks throwback that I hadn't see in a long time. I opted for a green pair featuring our old friend Mr. Toad of Wild Ride fame. 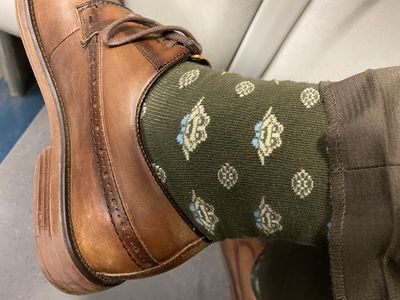 My foot is adorned with our old friend Mr. Toad. Photo by Gregg Jacobs.

So now, you're able to show your Disney side in a whole new way—on your feet.

That rounds out our foot adventure. Thanks for reading, and see you next time.