I've been counting down everything I love about my favorite attractions in the Magic Kingdom for several months now. I've waxed somewhat poetically about Space Mountain, Pirates of he Caribbean, Peter Pan's Flight, Haunted Mansion and so on and so on. I was just about ready to move on to Epcot when I realized that I was neglecting a whole area of the park which I admittedly have spent very little time in, Fantasyland's Storybook Circus. This corner of the Magic Kingdom has just about never been on my itinerary since it opened back in 2012 as part of the major expansion and overhaul of Fantasyland. I imagine the reasoning behind that is the fact that my kids were more than a bit perturbed about the closing of Mickey's Toontown Fair. This was a childhood favorite for all three of my kids and the loss of Mickey's house alone is still a sore subject with them. As a matter of fact, aside from an obligatory, "let's go check it out," once it opened, we've barely set foot back there. That was until my last trip with my sons this past fall.

We were on a major character hunt during Mickey's Not So Scary Halloween Party in September. All three of us were determined to track down and at least see all of the special characters that come out and meet guests on party nights. The draw in Storybook Circus was the opportunity to snap a photo with all of the Seven Dwarfs at once. That's something that just doesn't happen all that often. When we got back there, there was a ninety minute wait. We decided that just seeing them was good enough to cross them off our lists, and then we unanimously decided to wander around the area and check things out for a change. We were awfully glad we did.

The Storybook Circus area of Fantasyland is themed to one of my favorite Disney animated films, Dumbo. On the surface that should have been enough to keep me back there over the years. Dumbo is a classic, one of the true animated greats of all time. The circus theme is well done and there are lots of nods to the true golden age of Disney animation.

I'm not sure why we stayed away for so long. I guess the kids grew up, didn't have any kind of burning need to ride Dumbo or the Barnstormer anymore. As a matter of fact, my daughter, who always loved Dumbo as a ride and a character was pretty annoyed when they picked up the attraction and moved it. Her view was, "Part of the joy of Dumbo was flying through the air with Cinderella Castle in view, otherwise, what's the point?" Even though Dumbo and Cinderella don't have anything to do with one another, I understood her point. That was her childhood experience and she wanted it to stay intact. But that evening with my boys wandering around Storybook Circus ushered in a new level of appreciation for the area. In what way you ask? Let's find out with my Top 5 things to love about Storybook Circus in the Magic Kingdom.

What could be better than the most classic of all Disney rides? How about two side by side? I stand by Samantha's feelings that Dumbo kind of belongs in view of the castle but I also remember the slow torture of waiting on long lines for the ride in the hot Florida sun just to ride for what felt like 30 seconds. 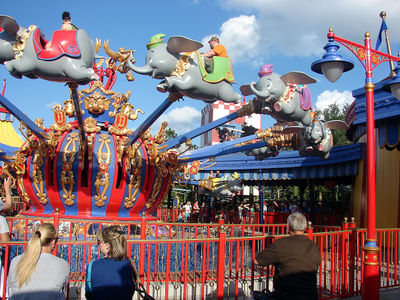 What could be better than one Dumbo? How about two Dumbos side by side in Storybook Circus.. Photo by Mark Goldhaber.

With the move came two Dumbos and someone had the brilliant idea of giving guests a pager as they wait for their turn to ride. Now while families wait, the kids can run around in the air-conditioned circus play area, while their parents wait nearby cooler and less frustrated. It's a tradeoff, but despite my daughter's strong feelings about Dumbo's placement, I can totally see the appeal of the new setup.

Here's the thing about this junior coaster in Storybook Circus; it's a great first coaster for the kids, but, in my humble opinion, it's not worth a long wait. I'm a coaster guy, in a big way. The Barnstormer is a fun coaster and a great way to introduce the little ones to coaster riding. However, the one minute ride time just isn't worth waiting a half hour for. The only time I've ridden we literally walked onto in early in the morning without any long hot wait. Keep in mind the queue is predominantly outside and the shade stations just don't offer much respite from an Orlando summer swelter. 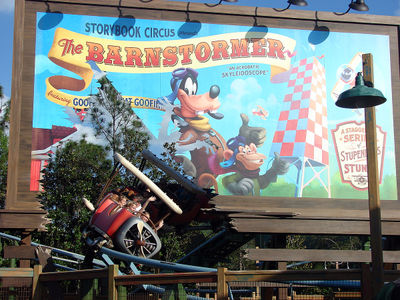 The Barnstormer is the perfect first roller coaster for any young, or young at heart, Disney fan. Photo by Mark Goldhaber.

Still, the ride's all about Goofy and it's really the only attraction in Walt Disney World that's completely goof-centric and that alone puts it on this list. Goofy's one of the Fab 5 and he's my son Alex's favorite. He'd be happy just walking around it and checking it out rather than actually riding and that makes it something worth visiting for us. Goofy's circus posters are particularly worth checking out.

I'm a sucker for a Disney gift shop and the huge circus tent themed shop in Storybook Circus doesn't disappoint. First of all, it's pretty cool looking with lots of circus inspired details throughout. Second, it has a respectable selection of souvenirs, plush toys, clothes, magic bands, hats and much more. Third, and perhaps most importantly, it's one of the best places to get a treat in the whole park. 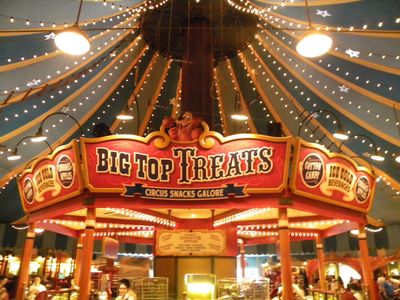 You can find all sorts of treats and souvenirs in the center of the Big Top. Photo by J. Jeff Kober.

While everyone else is crammed into the Main Street Confectionary, you can come back to the big top and find all the same delectable Disney delights. All the candy apples, fudge, chocolate covered fruits, and famous rice krispy treats can be found in Big Top Souvenirs along with their own frozen slushie concoction, Goofy's Glaciers.

Despite the blazing Florida sun, I've never been one for being in one of the Disney parks, getting positively soaked, and then having to go on about my theme park day. I've been lucky enough to just get what I'll call moderately wet on Splash Mountain, but never soaked. I have gotten drenched on Kali River Rapids but I tend to wear my Mickey poncho over me on that ride to prevent getting soaked to the bone. If you child runs into the Casey Jr. Splash and Soak Station, there's not much of a debate, they're going to get soaked. nobody loves that more than a kid on a hot day, but wet clothes and squishy sneakers typically don't make for a comfortable afternoon walking around the Magic Kingdom. 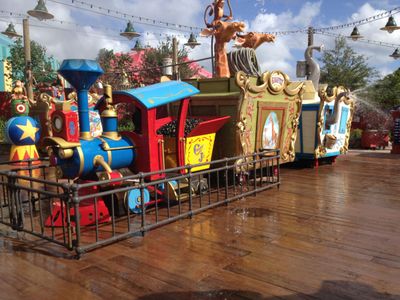 That said, I don't love Casey Jr. because it cools off kids on a hot day. I love the mere fact that he's even there. As I said before, I'm a big fan of Dumbo and having this reference to the original animated film is a big plus Casey has been in Disneyland since the year it opened and it's great to now have him in Walt Disney World. If you can dryly get up close to the train cars holding the circus animals you'll spot references to the opening dates of the four Walt Disney World theme parks, 71, 82, 89, 98. The clown car with the monkeys on top has a mural of clowns on the side and the one of the center bears a striking resemblance to Disney legend Ward Kimball. Ward was one of Walt's original team of animators, the Nine Old Men and worked on Dumbo. He also led a legendary music group called The Firehouse Five Plus Two, which would be why his clown likeness is wearing a fireman's outfit. That's just the kind of Imagineering detail that makes the Disney parks so special.

Building upon number two on my list are some of my favorite nods to the golden age of Disney animation. Throughout the Big Top area you will see several posters advertising the many different acts that purportedly will be appearing in the circus. Every one of these posters feature a character from Disney's stable of animated characters, but not modern ones, not even well known ones for that matter. Walk around and you'll see a few of the biggies like Pluto and Pete but you'll also see others mostly from classic Disney animated shorts such as Salty Seal... 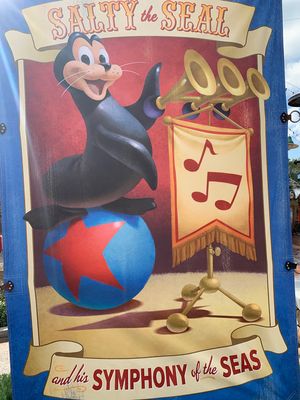 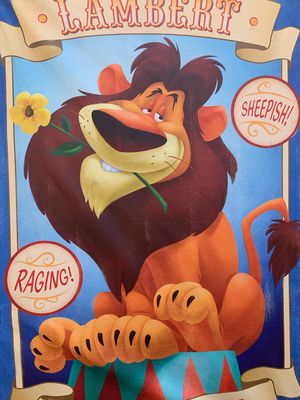 Lambert the Sheepish Lion was the star of his own animated short by the same name in 1952. Photo by Chris Barry. 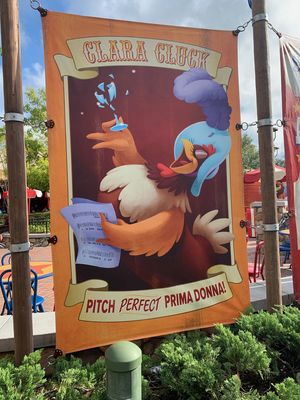 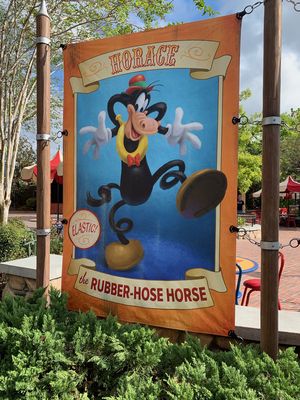 Horace was first seen as Mickey's horse in the 1929 short The Plowboy. Photo by Chris Barry. 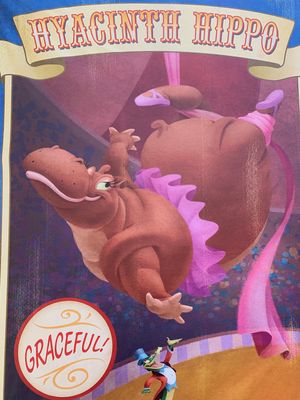 Guests might recognize Hyacinth Hippo from several different Disney parades but she got her start in the 1940 Disney classic Fantasia. Photo by Chris Barry.

...and my favorite Humphrey the Bear. 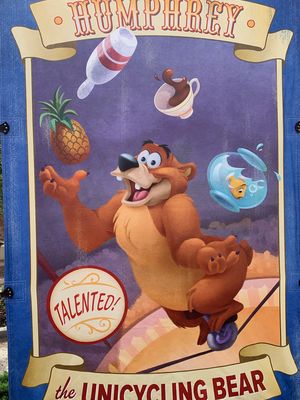 Humphrey started out with Goofy in 1950's Hold That Pose and later went on to appear in many shorts with Donald Duck. Photo by Chris Barry.

Once again, these are wonderful nods to Disney history. The Imagineers could have easily shoehorned newer and more popular characters into these posters, but they chose to honor the company's storied past by including these characters which are rarely, if ever, represented in the Disney parks. They fit the time period and they help flesh out the whole circus theme in Storybook Circus. It's one of my new favorite things anywhere in Walt Disney World.

Even if you don't have little kids, make sure you head back to this corner of Fantasyland. The details are everywhere. Look down and see animal tracks and even peanut shells embedded into the concrete pathways. Head into the train station and check out the lost luggage with inscriptions like, " Big Bad Wolf Balloonologist Extraordinaire," and watering buckets for the elephants who weren't very nice to Dumbo in the film, Caddy, Prissy and Giddy. If you're a fan of Dumbo or a fan of the classic era of Walt Disney Animation, this is the place for you to spend some time wandering around and admiring the extraordinary job the Imagineers did with this land.

That's all for this time. As always, I'd like to hear what you have to say. Click on the link below, share your thoughts on Storybook Circus land and I'll see you next time with another Disney Top 5.