For over 55 years, Mort Drucker drew caricatures of people, actors, creatures, public figures, historic personalities, and politicians for cartoon stories and spoofs in Mad magazine. His extraordinary talent has been beloved by millions of the magazine's fans as well as by other artists, and even by the stars he was often parodying.

Beyond Mad, Drucker worked on movie posters, Time magazine covers, music album covers and sleeves, comic strips, children's books, coloring books, and other works of satire and humor. Out of his prolific work, some of his pieces, like his covers for Time, have been included in the U.S. National Portrait Gallery in D.C. At the age of 91, he passed away last Thursday, April 9th, 2020.

Like many of us, during this time of the ongoing global pandemic, I found myself at home so much that I started going through things in the house and in closets and storage shelves just to pass some time and maybe organize a few things. I pulled out my collection of Mad and Cracked magazines that feature Star Wars parodies and couldn't resist thumbing through the old pages to relive some of the spoofs they drew up from back in the day. Some jokes were downright hilarious, some jokes fell flat, some were dated and perhaps a bit offensive to today's tastes—but what remained enjoyable the most was the artwork. I loved the caricatures of Han, Leia, Luke, and others with their exaggerated expressions and often clueless faces that could tell their own story even without the speech bubbles. Thinking these would make for great content on my next article here on MousePlanet, I began compiling some images when the news hit that Mort Drucker had passed away. Looking back through some of the scanned pictures I was pulling together I saw that the great majority of them were drawn by Drucker himself. I decided to modify my goal a bit and turn this month's article into a tribute to Mort Drucker's Star Wars parodies from Mad. 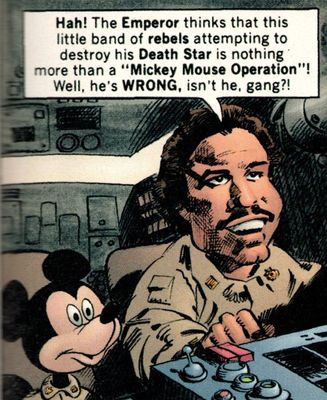 I thought this image of Lando Calrissian and Mickey Mouse would fit the theme of this article perfectly. Illustration by Mort Drucker.

In the December 1978 issue of Mad, the writer's put together a musical revue by changing the words of popular songs into the context of the galaxy far, far away. This resulted in "The Mad Star Wars Musical," that began with one of Drucker's famous opening spreads shown here in its reprinted colorized version. 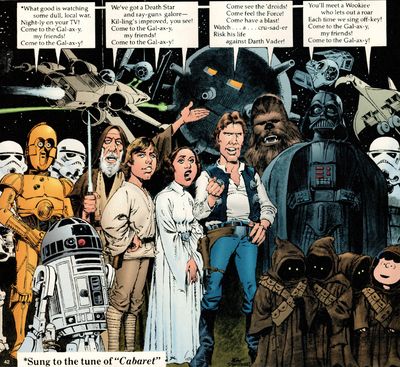 If a musical spoof of Star Wars were made today, Mad Magazine had it beat by a few decades. Here Drucker provides a cavalcade of characters from the first movie. Illustration by Mort Drucker.

He often added visual gags that weren't park of the dialog, like the presence of the random Lucy mixed in with the Jawas (where one Jawa appears to be looking at her like, "What are you doing here?") or the spaceship with a dopey bird's beak or giving Darth Vader googly eyes.

Speaking of music parodies, this practice continued even into the 90s where we find a fantastic 2-page spread of our Star Wars folks cutting a rug to the "Macarena," complete with George Lucas commentary and lyrics. (1999 "Star Wars Spectacular" issue, note Harrison Ford's other alter ego) 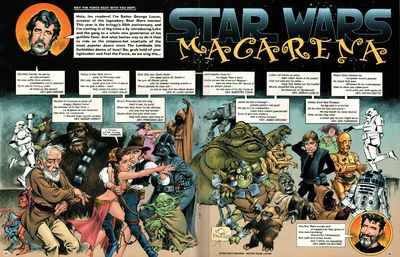 Mad specialized in combining pop culture ideas into their spoofs. Drucker includes many visual gags with the Star Wars characters to the tune of the Macarena. Illustration by Mort Drucker.

Mocking popular TV shows and movies was Mad's specialty, and Star Wars was no exception. The writers and artist took to Star Wars in some of the earliest parodies of the franchise. When it came to the second film, The Empire Stikes Back, Mad didn't hold back, and Drucker was there to bring the comedy to life. It was common practice for the magazine to begin its story with a full-page spread of gags like this one. 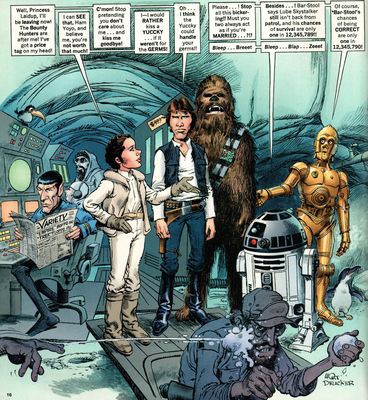 Mad's spoof of The Empire Strikes Back began with this set of gags including Spock at his terminal and a literal price on Han's head. Illustration by Mort Drucker.

These spreads often held hidden jokes, like the easy-to-miss snowball fight in the foreground.

As important as his faces, Drucker had stated that his character's hands also told much of their story and were just as expressive as eyes and mouths. There are many examples one could point to in order to exemplify that, and I think this one of Han and Leia (and Luke) are both subtle and revealing. 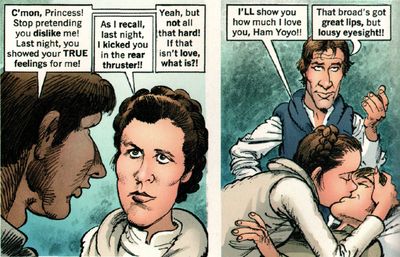 Still, the faces were so good and make me laugh every time. 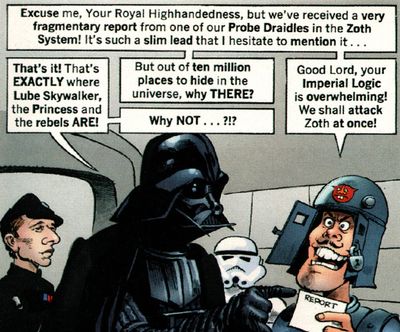 Drucker's drawings were madcap even in contrast with the serious portrayal of other characters. Illustration by Mort Drucker.

As I enjoyed looking through these strips it was quickly evident that Mort Drucker always tried to outdo himself and never settled on using the same portrayal frame after frame. Even in later issues he'd go for different proportions or exaggerations to great effect. 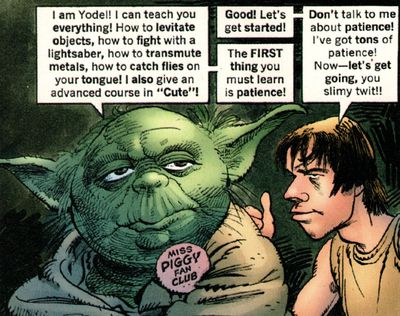 It seemed that Drucker never repeated any poses of his characters, and had fun stretching their proportions. Illustration by Mort Drucker.

I love the subtlety of many of his pictures. The ugnaught in the background is trying to point out Lando's mistake while bearing an expression of, "Hey stupid, look over there." 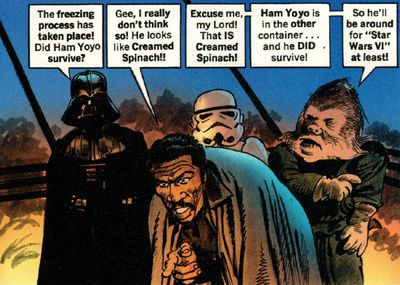 Drucker was masterful in setting a scene that was both silly and true to the look of the original like this one from the freezing chamber in Empire. Illustration by Mort Drucker.

It's great when he allows the characters we're familiar with to take on silly postures and actions that are a delight to see. For insance, Vader isn't immune to wackiness in the pages of Mad. 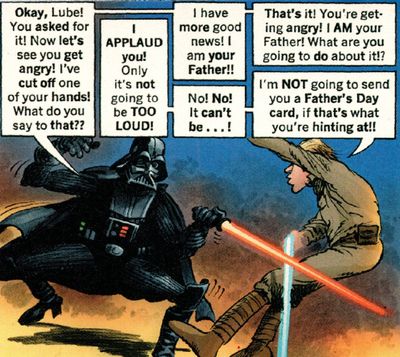 Even a villain as stiff as Vader can't escape a goofy fencing pose by Drucker. Illustration by Mort Drucker.

Sometimes without the word balloons, his drawings could be stirring like the melancholy ending of Empire Strikes Back shown below without any faces as, with them, we look over their shoulder to the outer space scene ... and then we spot the wind-up key of the Millennium Falcon. 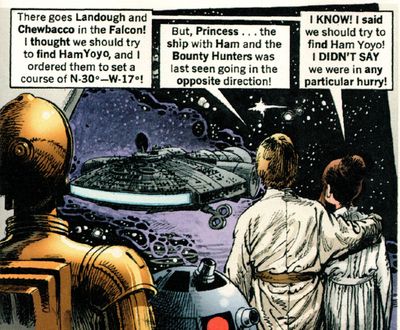 Drucker often drew many images that were poignant even when the text was still humorous like this one spoofing Empire's final shot. Illustration by Mort Drucker.

In a case funnier than parody, Lucasfilm's legal department almost sued Mort Drucker for his spoof of Empire Strikes Back. The parody, called "The Empire Srikes Out," somehow got the lawyers in a tizzy where they composed a cease-and-desist letter to the artist to stop and recall the whole thing. Unbeknownst to Lucasfilm's legal team, George Lucas absolutely loved the parody (and had liked the parody from Mad on the first film) and had even written the magazine praising them and Drucker for the piece, and going so far as to request a copy of the original artwork for himself. The letter famously included Lucas's acclaim, "Special Oscars should be awarded to Drucker and DeBartolo, the George Bernard Shaw and Leonardo da Vinci of comic satire. Their sequel to my sequel was sheer galactic madness… Keep up the good Farce!" (Source) Needless to say, that put an end to any thoughts of a lawsuit from Lucasfilm ever again.

Lucasfilm's legal beagles must have forgotten that George Lucas's film, American Graffiti had its poster created by none other than the mad artist himself. 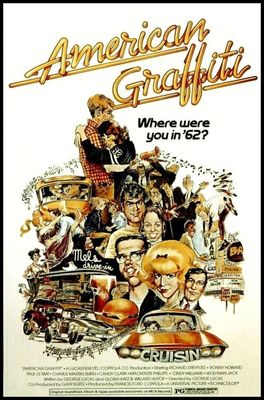 Return of the Parodi

Drucker's work on the original trilogy continued into Return of the Jedi with even more hilarity and of course, beginning with a full-page drawing. 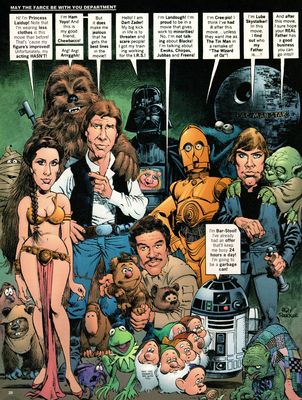 Mad often began their stories with a wild "pile up" of characters like this one at the start of their spoof of Return of the Jedi. Illustration by Mort Drucker.

In Star Wars, creatures were as much the stars as the humans, and Drucker could bring out the silliness of them, too. 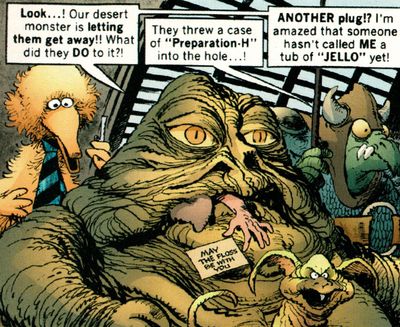 Drucker often threw in characters from anywhere and everywhere to add to the absurdity of such scenes as this one of Jabba and his cast of monsters. Illustration by Mort Drucker.

As noted earlier, he often changed up his caricature's looks, like this new take on Yoda. 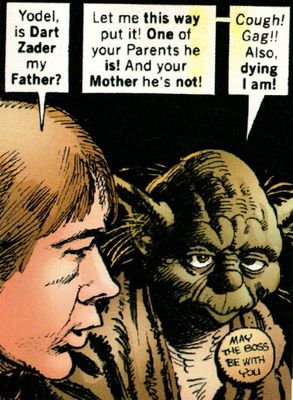 A different, but no less silly look for Yoda, in his 'cough' death scene with Luke. Illustration by Mort Drucker.

I just can't get over Luke's nonplussed expression in this next drawing. It looks like he's desperately trying to be serious but just doesn't know how stupid he looks. 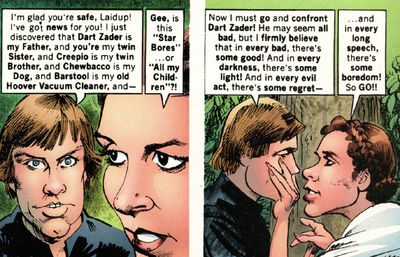 Both of these caricatures of Luke and Leia are so funny, not because they're simply drawn funny, but because their expressions are serious bringing the perfect irony. Illustration by Mort Drucker.

He was very much like a movie director in his comic stips, where would vary his shots, not always rely on close-ups, and depict action to underscore the humor. 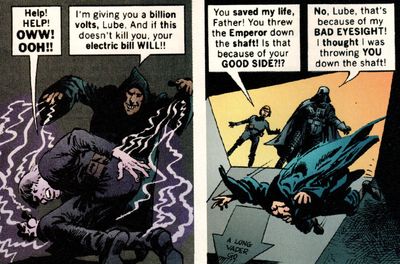 Drucker is able to depict a quick-action gag when Vader "mistakenly" throws the Emperor to his death. Illustration by Mort Drucker.

But when it's time for close-ups and gags, he's your artist especially in this joke which is mostly visual anyway. 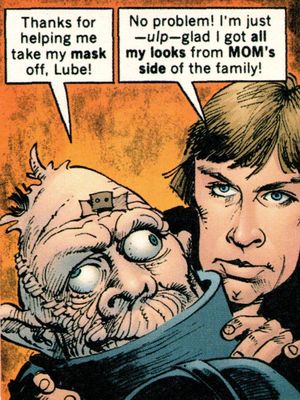 When needed, Drucker would also go full-on ridiculous for comedic effect, like this face of the unmasked Vader. Illustration by Mort Drucker.

Even without faces and cariciatures, Drucker could spice up the stories and spoof the style of the original concept like in the picture below of a sweeping action sequence of a war in the stars.

Drucker's talent went even beyond caricatures and into scenery like this space battle, with the kitchen sink gag not looking out of place. Illustration by Mort Drucker.

He would sometimes take his queues from the writers, who would sometimes add scenes not from the source material but from inferred actions and their own imaginations. Drucker could accommodate those acts of whimsy and set the scene just right. 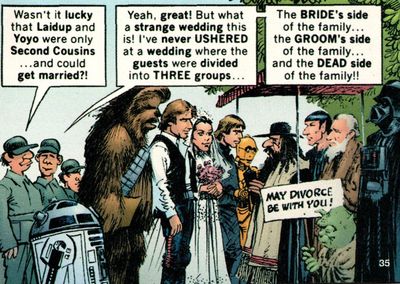 Not a scene from the movie, but one left to our imagination. With Drucker's imagination, we get this hilarious image of what surely would have been a weird-looking wedding. Illustration by Mort Drucker.

Maybe his visual gag of, "May Divorce be with You," could be seen as prophetic, since later films show Han and Leia separated—but perhaps it was just his play on words from the strangeness of all things in Star Wars.

Attack of the Spoofs

I hope this does well to honor the memory of Mort Drucker, especially for his parodies of Star Wars characters from Mad. He and the magazine blazed many trails in the world of spoofs, that so many have been inspired by their work—that countless farces and mockeries have come and gone from many different mediums up to this day.

I see things like Drucker's work and Mad's writing to be among the best of parodies, and also some of the earliest ones of the franchise. It reminds us all to not take it all too seriously, to remember to laugh at silliness (how could we forget?), to see things in different ways, to find humor in the world and in ourselves, and to appreciate art in its many forms. As a Star Wars fan, I thank him for his comedy. As a person who needs levity in these trying times, I cherish him for his art. 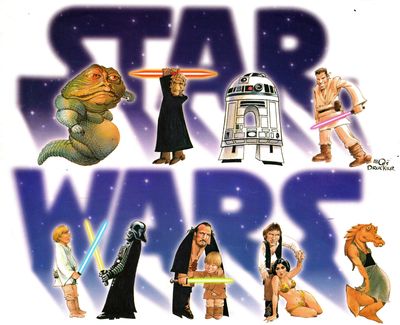 Mort Drucker produced many covers for Mad including this cute Star Wars title from the Summer 1999 issue. Illustration by Mort Drucker.