The 2020 Epcot International Flower and Garden Festival: A Photo Tour

When the 38th International Flower and Garden Festival opened at Epcot in early March, we eagerly made our way to World Showcase to see what was new at one of our favorite festivals on Walt Disney World Property. We were excited to see some of our favorite topiaries as well as a few new ones, with flower gardens and great places to sample food and beverage.

Then, in just a few days, the world changed.

As we put this Photo Tour up, we know that Disney is still closed for the foreseeable future, and we have no idea what's to become of this year's Flower and Garden Festival, but we wanted to bring you a few pictures of how it was when it opened. 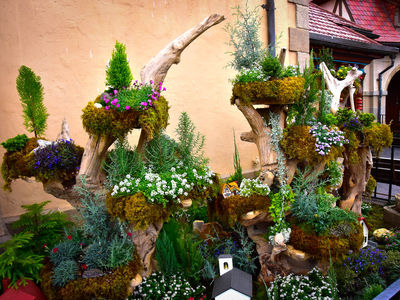 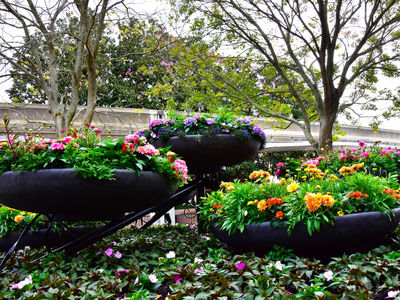 We were impressed with these outdoor pots we found near the Land. It reminded us of the 1970s, with the hanging macramé pot holders, terrariums, and so on. Photo by Bonnie Fink. 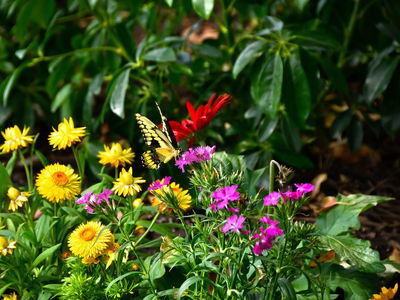 The Goodness Garden Butterfly House is back this year, but it's in a different location. You can find it in Futureworld West, between The Land and Imagination! Photo by Donald Fink. 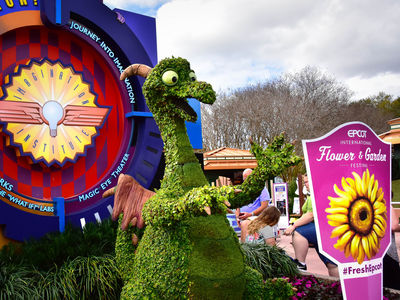 We've been seeing Figment at a lot of festivals lately. he's been the main theme of the International Festival of the Arts, and this year he's also in Futureworld West, at his home in front of Journey into Imagination. Photo by Bonnie Fink. 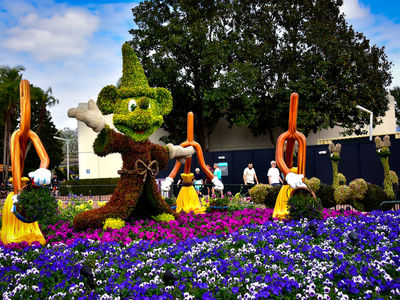 Sorcerer Mickey, in topiary form, is in Futureworld West. He's accompanied by magic brooms, as always, and a few ostriches and hippos. Photo by Bonnie Fink. 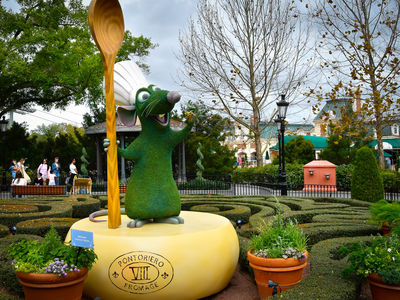 A new topiary in the France pavilion is Remy, from the movie "Ratatouille." This is no doubt celebrating the new ride, Remy's Ratatouille Adventure, scheduled to open sometime this summer in the France pavilion's newest addition. We had a chance to ride this attraction at Disneyland Paris, and we're looking forward to its opening here in Florida. Photo by Donald Fink. 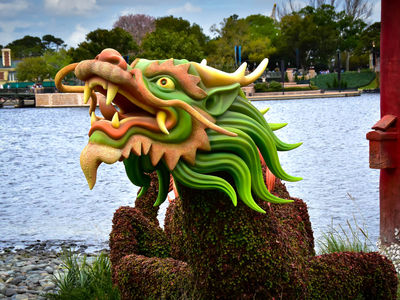 There's a new dragon topiary at this year's festival. He's in the Japan pavilion, along the shore of Bay Lake, in front of the Torii Gate. This guy is in a great location, making him a very popular picture spot. Photo by Bonnie Fink. 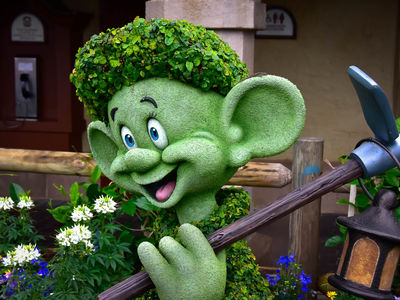 We usually see Snow White with all seven of her dwarves, but this year all we found was Dopey. He's here in the Germany pavilion, near the restrooms. You might be able to see some of Florida's most common fauna sitting on his left ear. Photo by Bonnie Fink. 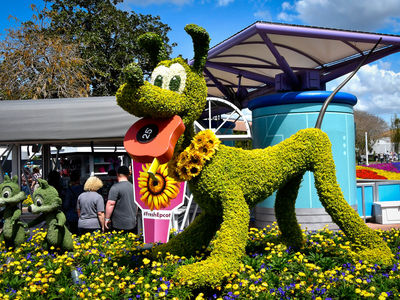 This Pluto topiary, along with Chip 'n' Dale, are located along the walkway between Futureworld and Showcase Plaza, on the left as you move toward Showcase Plaza. Pluto has been around for a while in various situations. This year he's holding a 25-foot measuring tape. Photo by Donald Fink. 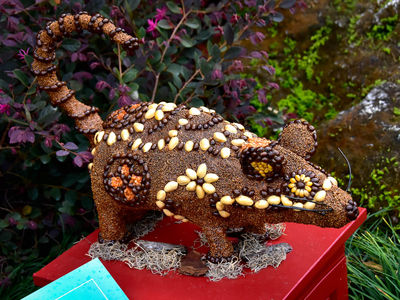 In the China pavilion, you can find seed-based topiaries depicting the twelve animals of the Chinese Zodiac. This is the Rat, and it just so happens that this year is the year of the Rat. Rat people, according to the Chinese Zodiac, are considered to be quick-witted, smart, versatile, and good at saving money. Some recent Rat years are 1948, 1960, 1972, 1984, 1996, and 2008. Photo by Bonnie Fink. 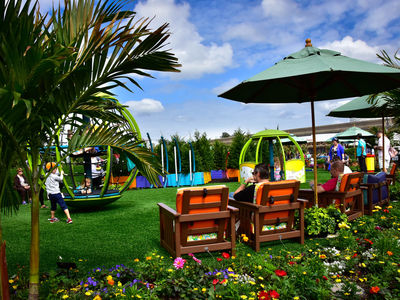 The children's play gardens are back this year. This is a glimpse of the Play Full Garden near Showcase Plaza in Futureworld West. The other garden is Bo Beep's Playtime Training Grounds, in Futureworld East. Photo by Bonnie Fink. 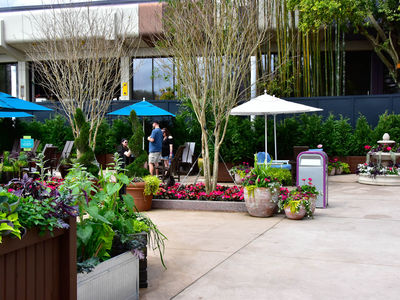 Do you remember where the Purple Martin houses were last year? They were by Test Track, near the back entrance to Mouse Gear. This year, the Purple Martins have been moved and Mouse Gear isn't there. Instead, there's a quiet little spot called Outdoor Escapes. You can visit this secluded area and get some small space planting ideas, or just unwind. Photo by Bonnie Fink. 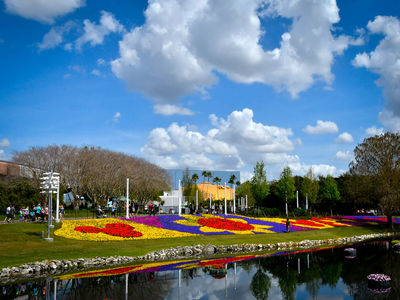 One of the often-overlooked flower gardens is the garden between the walkway from Showcase Plaza and Test Track. It's in view from the right side by Monorails entering Epcot, and this year, due to construction in Futureworld, you'll be likely to walk past on your way in or out of World Showcase. The purple martin houses have found a new home here too, and as of this writing are fully populated. Photo by Donald Fink. 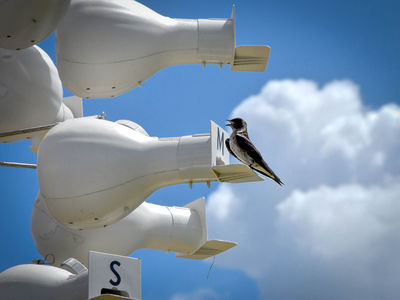 We've talked about this before, but Walt Disney World is home to many purple martin houses. Purple martins are the largest of the swallow family. They make their way into North America this time of year and take up residence in artificial houses like these. In fact, it's been reported that all habitat in North America used by these migratory birds is provided by humans. If you're familiar with them, you no doubt can appreciate their distinctive Swallow-like song. Photo by Donald Fink. 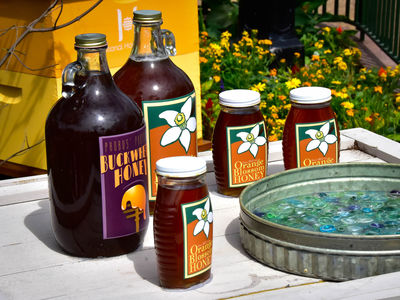 Near the Honey Bee-stro in Showcase Plaza, we found a display sampling various honeys. The beehive in the background is not populated. Photo by Bonnie Fink. 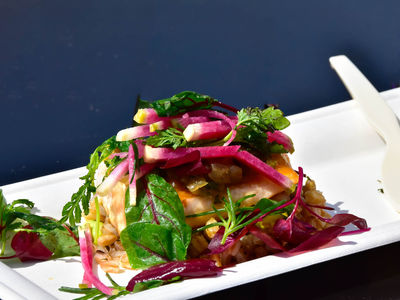 There's a Seared Salmon with Farro Risotto and Micro-herbs inside this garden fest of colors. It's from the Flavor Full Kitchen, which is in Futureworld West, near Showcase Plaza. Farro, as you may know, is an ancient wheat, cultivated in Europe. The grains are prepared as a Risotto dish and called Farrotto in Italy. Photo by Bonnie Fink. 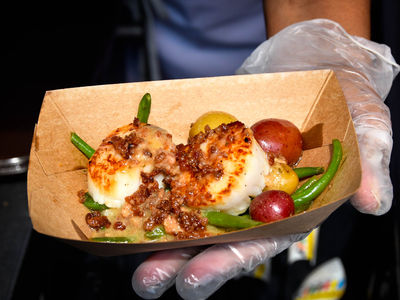 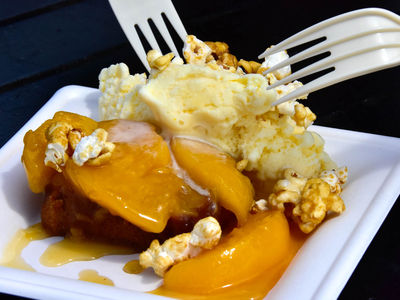 This is a Griddled Pound Cake from the Northern Bloom in the Canada pavilion. We enjoyed this dessert, especially with the subtle flavor of maple syrup. A big surprise though was the sweet corn gelato. Who would have thought that sweet corn would be such a great ingredient for gelato? We did a quick Google search for Sweet Corn Gelato, and it turns out that it's a real thing. The actual Popcorn on top didn't do much for us, but you still need to try this dish. Photo by Bonnie Fink.

We've never been overly impressed with the presentations of the food at the portable venues in pretty much any of the Festivals, but we'll also point out that the presentation doesn't necessarily reflect the taste of the samples. This is particularly true with the Griddled Maple Pound Cake found at the Northern Bloom in Canada. This complicated and very busy looking dessert is based around a griddled pound cake, which is hidden away at the bottom. One of the flavors of this unique cake comes from Burton's Maple Syrups, a natural syrup from Canada. 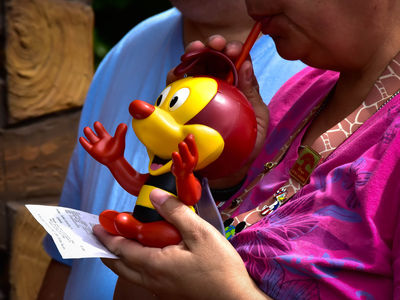 Not to be outdone by the citrus industry, you can find a Spike the Bee Sipper Cup at Honey Bee-stro, hosted by the National Honey Board. The Spike the Bee Sipper comes filled with a Honey-Peach Freeze. We didn't sample it, but anything that involves honey and peach has to be good. Photo by Bonnie Fink. 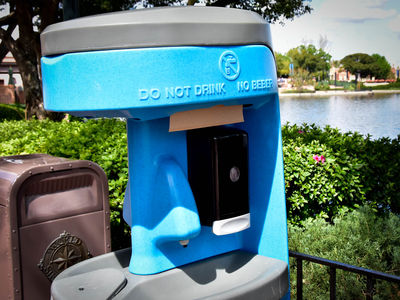 One sign that things aren't quite the same here in Florida is the sudden presence of hand washing stations throughout the parks. Here, a portable station is set up along World Showcase. Not a bad idea before handling food. Photo by Bonnie Fink. 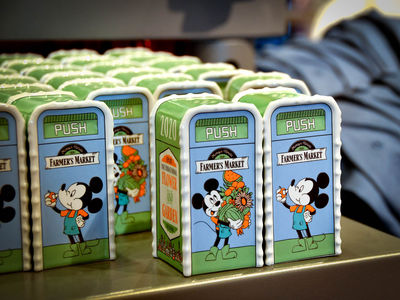 Mickey Mouse salt and pepper shakers are themed after a Farmer's Market, in celebration of the Flower and Garden Festival. We found these in the new, temporary Mouse Gear retail store in Futureworld East. Photo by Donald Fink. 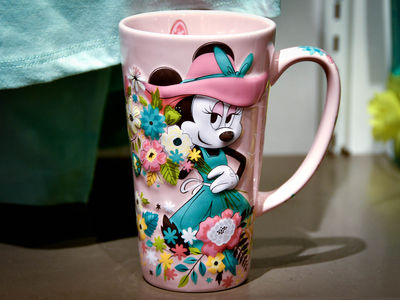 Here's a porcelain cup featuring Minnie Mouse with a gardening theme, in the spirit of the International Flower and Garden Festival. Photo by Donald Fink. 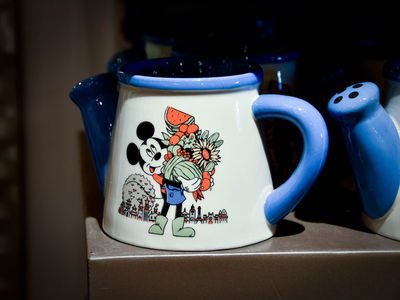 At Mouse Gear, and at a few other merchandise outlets around World Showcase, you can find a cup patterned after a watering can. On the side, you'll see Mickey Mouse holding the garden bounty with buildings from around World Showcase in the background. Photo by Donald Fink. 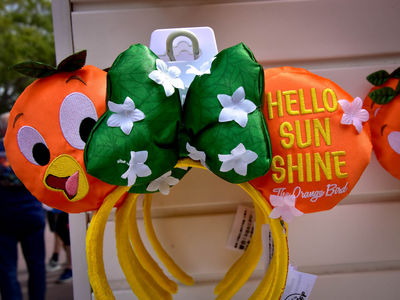 The Orange Bird is still here at the international Flower and Garden Festival. This is the orange Bird headband, found all around Epcot. You can also get an Orange Bird Sipper Cup, filled with an Orange Cream Shake, at The Citrus Blossom, located in Showcase Plaza. Photo by Bonnie Fink.

We're hoping that Epcot, Walt Disney World, and the rest of the world can get back to business with enough time to enjoy at least some of this year's International Flower and Garden Festival. We don't mean this in a flippant, shallow way, but as an expression that the world needs to get back to the things that make our lives seem more normal. With the pandemic on everyone's mind, we can certainly see the joy in something like the Festival and at least for us, it will never be under-appreciated.