I hope you're all either doing well, or doing as well as you can be. Things are quiet in the Barry household. There's some work being done. There's some spring cleaning being done. The simple things have taken over our lives like our daily walk around the neighborhood with the dog and dinners every night together in the kitchen. The temps keep getting warmer and therefore the tranquility of our yard and my wife's amazing gardens are starting to come to life. Most important though is that we're all healthy and we're all together, well, almost all of us. My daughter is still up in Boston finishing her courses at Northeastern online from the safety of her apartment. I hope that all of you out there are healthy and safe as well.

One of the things I said I was going to do in my last column was to start watching the entire catalog of Disney animated films from the beginning in order. I've seen them all, but there are many that I haven't watched in years and others that I have only seen once like the more recent releases which I've only seen in a theater. I own just about all of the films on DVD or Blu-ray and with my Disney + subscription at the ready, I'll have no problem completing this quest. My biggest hope, of course, is that we're released from a stay-at-home order long before I'm able to watch one a day because I'm not sure we can handle another 53 more days in isolation. Even if this all starts to go away slowly, I'll still find the time to keep the list going. I've wanted to do this for a long time regardless of our current situation. So, it was time to get it going. Last week I kicked it off with the one, as they say, that started it all, Snow White and the Seven Dwarfs.

First, let's define the parameters. When I say Disney animated films what exactly am I referring to? For the purposes of my general quest, it's the 58 full length animated features released under the banner of Walt Disney Animation Studios starting with Snow White and ending, so far, with Frozen 2. I'm not including Pixar releases on this particular list. Nor will I include releases from the other offshoot studios within the company like Disney Movie Toons and their releases like Jungle Book 2 and Return to Neverland. It should be said that I do own most of the sequels and direct to video releases on DVD or Blu-ray and some of them are quite good. But for the purposes of this list, it's the biggies, the big releases, the classics.

However, picking 5 out of 58 is a pretty difficult task, so for this particular list, I thought I'd narrow it down even more. You can break down the company's history into several time periods. There are the original 5 films released before the war. The short "package" films produced during the war like Make Mine Music and Melody Time. The incredible run of post war string of classics through the 1950's leading up to Walt's death in 1966 and the final film he worked on The Jungle Book. The"dark years" as they're sometimes known among diehards after Walt's death pre-Michael Eisner. The so called Disney Renaissance between 1988 and 1999 and so on and so on. So, let's start at the very beginning - a very good place to start - with the Golden Age of Disney animation. There's only 5 films, so it is a perfect place to begin. This is an incredibly tough order. These are Walt's first 5 major theatrical releases and they were basically inventing and perfecting the medium during this time. They're all masterpieces, but it's a Top 5 column, so here's my best crack at the Top 5 Disney Golden Age Animated Film Classics.

Maybe you're surprised that I've put this classic at the bottom of my list. I'm kind of surprised as well. Fantasia is a work of art and a stunning achievement in film. Walt was essentially testing the boundaries of his animators and letting them explore what could be done with the medium. The result is a ground breaking piece of cinematic history that pioneered the art and science of syncing animation to sound. 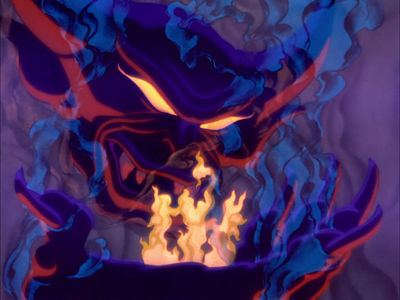 One of the great Disney villains, Chernabog from Fantasia. ©Disney.

Each segment is more beautiful than the next and each captures a different set of feelings and emotions. The film responsible for giving us the iconic Sorcerer Mickey that we all know and love so well is always worth revisiting. If you haven't watched it in a while, and I bet you haven't, now's the time to experience it again.

4 - Snow White and the Seven Dwarfs

I surprised myself again by putting one of the greatest achievements in animated films so low on my list. Despite it's beauty and it's legendary status, it's just not one of the films I go back to often. Snow White and the Seven Dwarfs was the first full length animated feature film and essentially created an art form. At the time it was being produced it was known in the industry as Disney's Folly. No one thought it would succeed. No one thought it made any sense to make a full length cartoon. Of course, as we all know, Walt knew exactly what he was doing and audiences were simply floored by the end results. 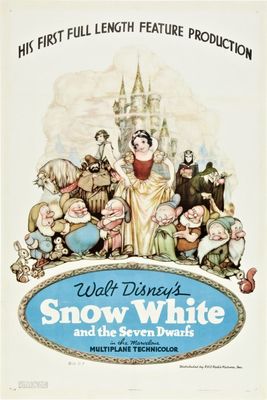 One of the original movie posters for Snow White and the Seven Dwarfs ©Disney.

It's hard these days to comprehend just how groundbreaking Snow White was. We take it for granted that full length animated films are the norm and that characters in Disney animated films can show deep emotions and elicit the same feelings from their viewers. This was not the case in 1938. People were literally stunned when they first saw the dwarfs crying around Snow White's deathbed. They couldn't believe that it was possible to capture that much emotion out of an animated character. They were also pretty amazed at how much they, as audience members, were crying in response to what they were watching. Watch Snow White and the Seven Dwarfs while you're at home right now and marvel at the piece of artistic history that it is.

Once again, this was a very hard list to put in order. I'm in no way slighting Dumbo. It's a beautiful film with great characters but it's a simpler film. From a stylistic point of view, Dumbo is the most cartoon like of the 5 films in this list and it's one of the shortest of all of Disney's animated classics. 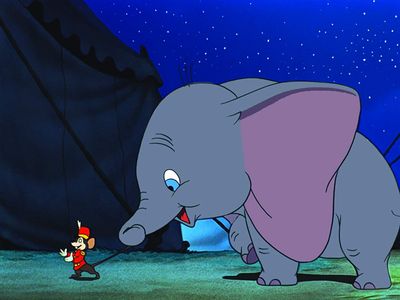 Dumbo and Timothy Q. Mouse, one of my favorite Disney characters. ©Disney.

Fantasia, Pinocchio and Snow White were not immediate financial successes and that led to some interesting cost saving measures on Dumbo. While the main animal characters are presented with vibrant colors, they are placed up against very subtle watercolor backgrounds which gives the film its simpler look. The human characters are almost exclusively seen with either no detail or in silhouette. This saved costs during the animation process, but it was also used as a brilliant storytelling tool keeping the focus on the animals. One thing you can't deny about Dumbo is that it has heart. If your heart doesn't break when Mrs. Jumbo sings Baby Mine, you may be soulless.

As monumental an achievement Snow White and the Seven Dwarfs was as Walt Disney's first full length animated film, his second, Pinocchio, took everything to a whole other level. Pinocchio has everything. It has a heartwarming story, wonderful characters, humor, action, suspense, terror, a song, When you Wish Upon a Star, that essentially defines the ethos and soul of the entire Disney organization and its fandom and a stunning amount of artistic detail throughout. 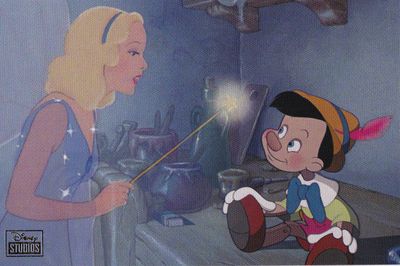 You just get the feeling that Walt had realized what was possible with Snow White and then turned it all up for Pinocchio. I hadn't watched Pinocchio since I was much, much younger and rewatching it the other night reinforced what I always knew, that it's not just an outstanding animated film, but it's an outstanding film in general.

The fifth full length animated feature produced by Disney, Bambi, is an extraordinary work of art. The simplicity of Dumbo was left behind and Walt and his team of animators went for a much more realistic look and feel to this film. For the first time real animals were brought in to the studio so the artists could sketch them and try to make their characters as lifelike as possible. Several animators traveled to the forests of the northeast United States to study the environment and see how animals moved and lived in the woods.

Bambi's opening shot as the camera pans through the forest and brings you deep into the natural world where the story will take place is one of the most beautiful shots ever created in an animated film. The whole film feels like a love letter to nature. Bambi was supposedly Walt's favorite film and has been called the "crowning achievement of Walt Disney's animation studio. There's nothing quite as joyful as watching Bambi and his mother prance around the meadow for the first time or as silly as watching Bambi and Thumper flop around on the ice or as harrowing as watching Bambi call out for his mother in the falling snow after she is gunned down by hunters. After four major cinematic achievements prior, Walt's animation team took everything they learned in four prior cinematic achievements and put it all together in Bambi. It's always been a favorite of mine and rewatching it at home during this harrowing time had a very calming effect on me.

The great thing about watching these 5 films is that you are watching a group of artists literally create and define a genre of film and perfecting an art form. Watch Steamboat Willie and realize where Walt took his animation only nine years later with Snow White. After watching Snow White make it through the other four films listed above and realize with Bambi where he had taken his craft in just 5 short years. It's mind boggling to think of just what was happening in the Walt Disney Animation Studios during these formative years of feature animation.

As I mentioned above there are many different definable time periods in Disney history. These days, I think it's taken for granted that these are masterpieces. Much more attention is given to the post war years of Cinderella and Sleeping Beauty and the Disney Renaissance years of Beauty and the Beast and The Lion King. Not to take anything away from those eras. The company created some amazing work during their long history throughout all of their different time periods. But this short burst of extraordinary films essentially created an art form and laid the groundwork for an entire industry to follow. i don't think people go back and watch these 5 films all that much. I know I hadn't watched most of them for way too long. If you've got the time, and, rather unfortunately, a lot of us have the time right now, watching these 5 films from the Golden Age of Disney animation just might help you get though these unsettling times with a little bit more magic and wonder than you'd expect.

As always I'd like to hear what you think. Click on the link below, let me hear your thoughts on these 5 classics and I'll see you next time with another Disney Top 5. Please stay safe.