Missing the Magic of the Music

The Disneyland Blog posted a great video of the Dapper Dans from Disneyland singing "When You Wish Upon a Star". If you have not seen it, you can click onto the link right here. This video got me thinking about how much I miss the music of Disneyland. One of the number one questions floating around social media right now is what is the first thing you are going to do when you get out of quarantine. We know that Disney will not reopen until it is safe so it may be a while before we can get back through the turnstiles. If all the music groups were to return immediately, here are my top picks for Disneyland. Next month I will cover the music groups of Disney California Adventure. (The Hook and Ladder Band in front of the Fire House on Main Street have not been on the schedule for a while and seem to only come out during the summer so I will not be including them in this list.) 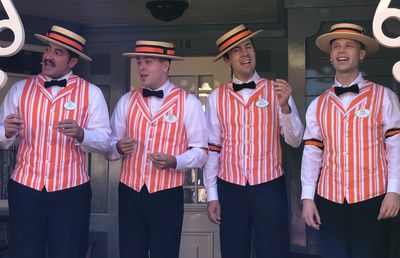 Main Street would not be Main Street without the Dapper Dans. Photo from MousePlanet archives.

The tight barbershop harmonies of this iconic quartet are most certainly a fan favorite. I am not able to walk by them without listening to at least one song. When it is raining and they have to sing indoors without microphones it is a huge treat to hear them unplugged. The Dapper Dans may also be seen riding about on the horse-drawn carriage or perhaps one of the Main Street Horseless Carriages to discourage crowds grouping around if there is still a restraint upon opening. Might they even break out that bicycle built for four again? 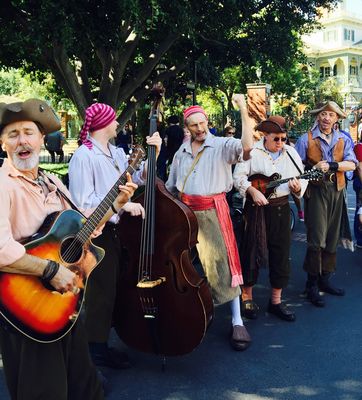 I defy you to head out and find a band that sings old sea chanties anywhere else but Disneyland! They are all always in character and such great musicians. Sometimes there is a gal with a fiddle and sometimes there is a squeeze box. Any iteration of this group is terrific. I fear though that The Pirates of the Caribbean movies have certainly waned in popularity and The Bootstrappers have been around for quite some time. Perhaps they are simply associated with the attraction these days more than anything. We could see this talented group on the chopping block due to their long run but singing pirates could also be spotted on the Rivers of America or even on the Columbia Sailing Ship if Fantastmic! stays dark for a while? Avast me hearties, that would warm the cockles of my buccaneer heart! 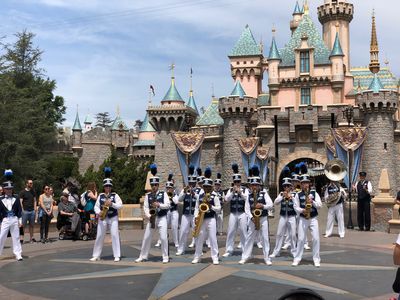 The Disneyland Band is an integral part of the park and Walt's vision. Photo from MousePlanet archives.

The Disneyland Band got a big makeover for the 60th Anniversary. With new royal blue uniforms and energetic sets. Including a wonderful Frontier inspired medley in Frontierland again just like in Walt's day this seems like a top pic for adding musicality in the park. The Frontierland set is my favorite for sure. They are so important to the Flag Ceremony that might not be able to function at first also. Perhaps crowds gathering for a parade might not happen and a marching band is perfect for spreading music anywhere in the parks without large groups milling around to see them. It could be a decent fix to overcrowding areas. 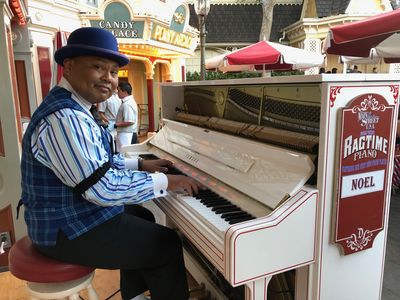 The Ragtime Piano Players are just as fun to watch as they are to listen to! Photo from MousePlanet archives.

I love getting a simple luncheon at Jolly Holiday Bakery or a treat or a cup of coffee and catching these super talented performers. Yes, you can tell that my tastes by now are completely biased by my favorite land, Main Street U.S.A. Staged at the Coca-Cola corner we may not see these talented fellows any longer due to the closeness of the dining and the very intimate stage. This would make us so sad missing Alice and the Mad Hatter play musical chairs with guests or accompanying the Dapper Dans for one set. 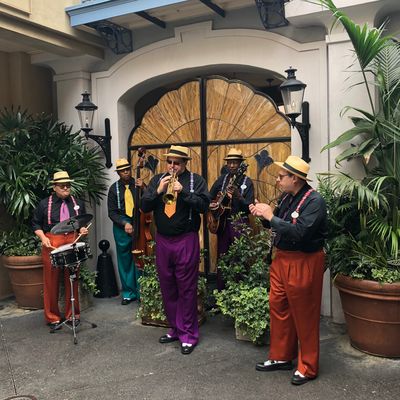 The Pirates of the Caribbean and The Haunted Mansion are two fan favorite attractions and Walt's love of New Orleans prompted this land along with the sounds of jazz. New Orleans Square just wouldn't be the same without these Cool Cats playing. I am personally not the biggest Jazz fan but their musicality cannot be rivaled anywhere around the resort. They have been spotted on the streets but that might be too cramped for crowds. They also play at the French Market Restaurant or on the Mark Twain River Boat. Floating along a raft used in Fantasmic on the Rivers of America would make for some wonderful evening entertainment. 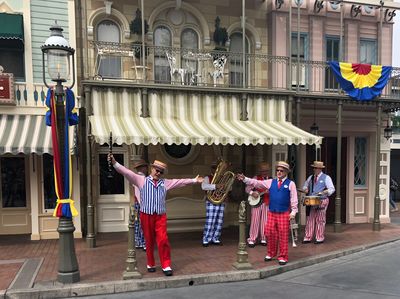 The Straw Hatters ham it up on Main St. U.S.A. Photo from MousePlanet archives.

The Disneyland Band and the Dapper Dans might be my favorites of Main Street but these gents also play the Americana song book perfectly. Music upon entering and exiting your experience is so key to theming but I am afraid if something had to go in the new era to come it may be these gents. Let's hope not! 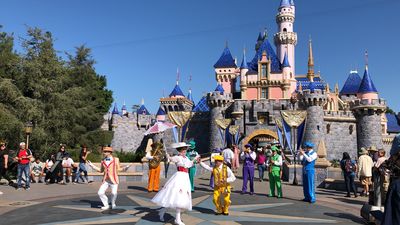 The Pearly Band plays on both sides of the Castle. Mary Poppins and Burt join in. Photo from MousePlanet archives.

For uniqueness and a new resurgence of Mary Poppins in the cinema we would love to see The Pearly Band continue to represent Fantasyland. This set in front of the castle needs a revamp for me to personally enjoy seeing them again but I do love their look and sound. I do love hearing them when they are tucked into the courtyard of the Castle near Bibbidi-Bobbidi-Boutique. My favorite is riding with them on the Carousel but these locations may not be possible upon their return. 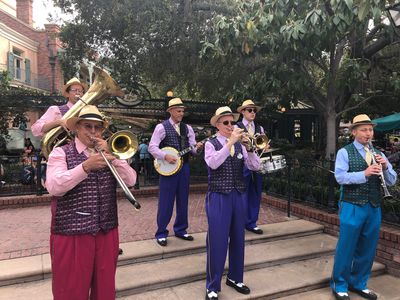 Jambalaya Jazz is the other band that whips up some Dixieland tunes. Photo from MousePlanet archives.

These gents tend to play a bit more of an upbeat Dixie sound than the cool and smooth Royal Street Bachelors but make no mistake they are also New Orleans jazz. This seems to be the most redundant musical group with New Orleans Square boasting three ensembles. Again we fear that one of these ensembles may not return right away. This group interacts more with people and always throws beads to the kids.

Writing this article makes me pause and think of how important the music is to the mood, theming and the live touches that seemed simply part of the fabric of mid-century America free from social media, mobile phones and video games. Watch the difference in a child's eyes of being glued to your phone or looking up into the eyes of a trumpet player, making eye contact and then watching that smile grow across her little face as she keeps time to the beat. I won't miss any sets upon my first return to Disneyland. It is my deepest wish to see each and everyone of these talented musicians on our first day back. This was difficult to rank them and every once in a while I stop and listen to different groups and each show is unique and important to the story-telling fabric of Disneyland. Which ones are your favorite.