Walt Disney World has been closed now for about two months, but for some of us, it seems like it's been longer. To those of us who spend time there, it's an inconvenience, but to the thousands of Cast Members, it's probably a scary and trying time. Let's also not forget the thousands of supporting employees from other third-party businesses that make their living supporting those who make the magic happen.

This month, we didn't have material for a conventional Photo Tour for obvious reasons, but we thought we'd open up our archives and dig around for some images to help keep the magic alive. We're starting a new series, calling it, "Things We Miss About Walt Disney World." This is "Part 1," but we have no idea how many parts there will be. They'll go as long as it takes. 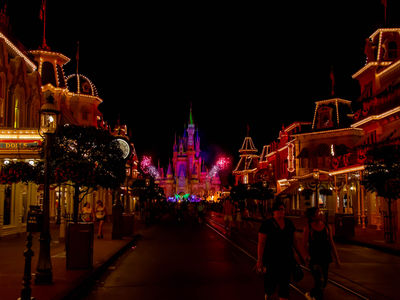 The Magic Kingdom is truly a magical place, especially at night as the buildings along Main Street USA take on a new personality. The lighting on the castle just rounds it off too. Photo by Donald Fink. 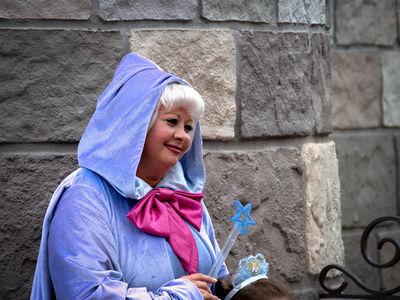 Cinderella's Fairy Godmother can be found near the castle and other locations in Fantasyland. Photo by Donald Fink. 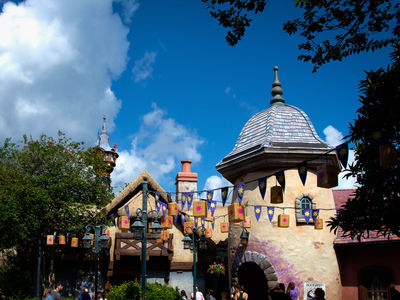 A few years ago, Disney built this area in Fantasyland. We speculated for some time as to the nature of what it could be until it opened one day and was nothing more than a public restroom. Being simply an area for "creature comforts," we marvel at the attention to detail given to everything Disney does. Photo by Bonnie Fink. 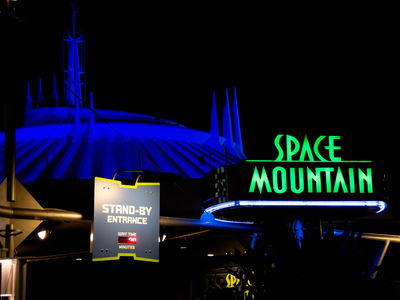 Space Mountain hasn't changed much over the years, but it really doesn't need to. Photo by Donald Fink. 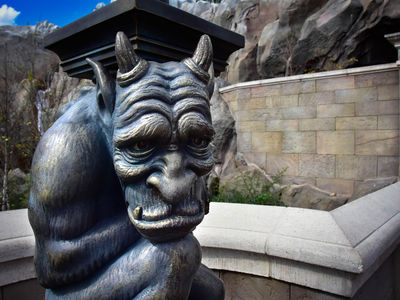 This gargoyle is located on a lamppost at the entrance bridge to Be Our Guest, the remarkable Disney restaurant in Fantasyland at the Magic Kingdom. We enjoy an up-close view of these things because, whenever you get this far along the bridge, it usually means you have a reservation at the restaurant. Photo by Bonnie Fink. 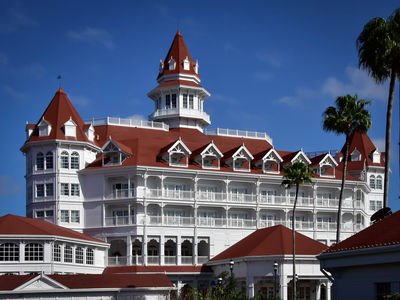 The Grand Floridian Resort is not only an icon in the skyline around Walt Disney World, but it has special meaning for us personally. It was the first "on-property" hotel we stayed in so many years ago that kicked off our adventure with Disney in Florida. Photo by Bonnie Fink. 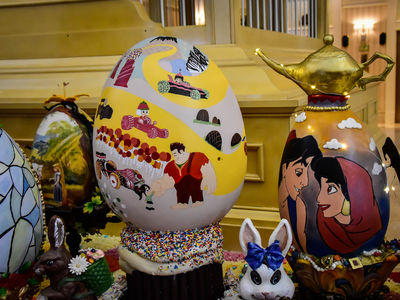 We missed the Easter Eggs at the Grand Floridian this year, but in 2019, we saw a grand collection of large eggs, including this Wreck-it Ralph, and Aladdin and Princess Jasmine eggs. In normal years, this Easter Egg collection is on display at Disney's Grand Floridian Resort, in the lobby. Photo by Bonnie Fink. 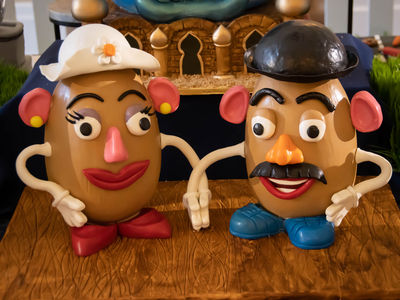 The Grand Floridian is not the exclusive location for Easter Eggs. This pair of Mister Potato Head Easter Eggs was on display in the lobby at the Beach Club in 2019. Sadly, not this year. Photo by Donald Fink. 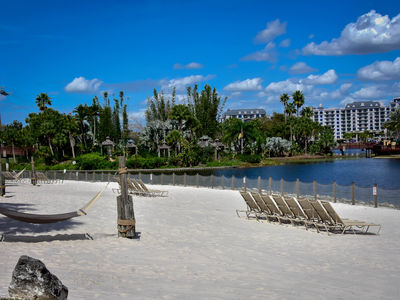 We're not beach people, but we would certainly enjoy walking by this beach again at some point in the future. It's located at Disney's Caribbean Beach Resort, on the way from the Skyliner terminal to the main Lobby. Photo by Bonnie Fink. 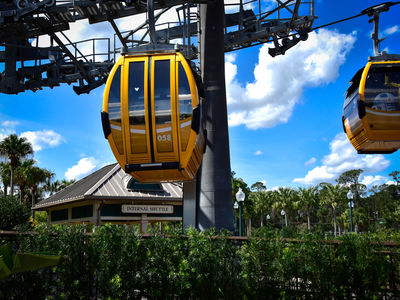 We were just getting used to the idea of an aerial tramway in the form of the Disney Skyliner. We were wondering how it would fare in the summer heat, considering that it's well ventilated, but not air-conditioned. Guess we'll have to wait a bit longer to find out. Photo by Bonnie Fink. 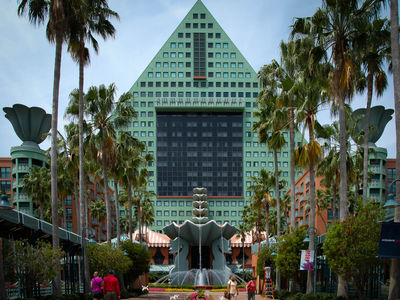 We've read that the back side of the Dolphin was originally intended to be the entrance, but it doesn't open to the lobby. In fact, the lobby is up a rather large escalator if you enter from this side. Urban legend has it that the dark part of the building was originally supposed to be an entrance for a new Monorail, but our research leads us to believe that, while the building itself represents a mountain, the darker center area is meant to be the heart of that mountain. Photo by Donald Fink. 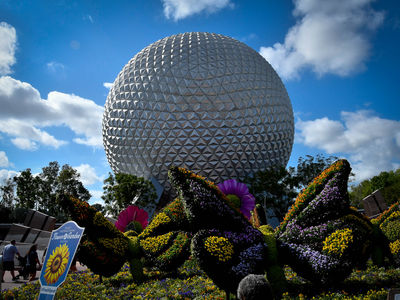 A view of Spaceship Earth as you enter Epcot. This view is from 2019 during the International Flower and Garden Festival. The current view, if Epcot was open, would include the globe but instead of butterfly topiaries (or whatever garden feature is in the middle flower bed), you would see construction barriers as the re-imagining of Epcot was in full progress when it closed. Photo by Donald Fink. 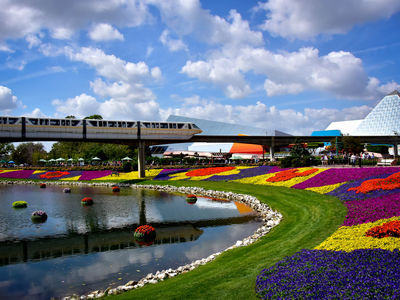 An iconic view of the flowers near Showcase Plaza in Epcot during the 2019 International Flower and Garden Festival. Waiting for the Monorail to move into the scene never gets old. Photo by Bonnie Fink. 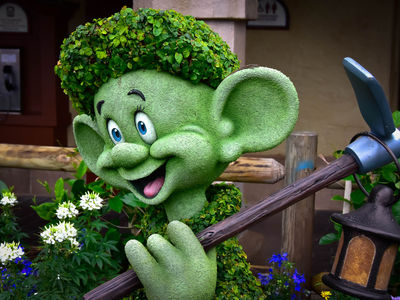 The Dopey topiary was out at the Epcot International Flower and Garden Festival this year at Epcot, and we managed to see him, briefly. Photo by Bonnie Fink. 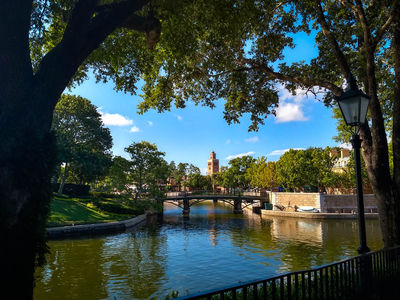 When entering France from the UK at Epcot, you cross a footbridge. The design of this bridge is said to be inspired from the Pont des Arts footbridge crossing the Seine River in Paris. The bridge before this one but not pictured here is said to represent crossing the English Channel. Photo by Bonnie Fink. 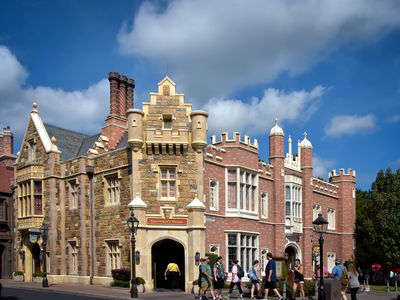 We've spent time in the UK over the last few years, and it's in part because we enjoy the United Kingdom pavilion at Epcot. You might say that it introduced us to England, and we miss them, Both of them. Photo by Bonnie Fink. 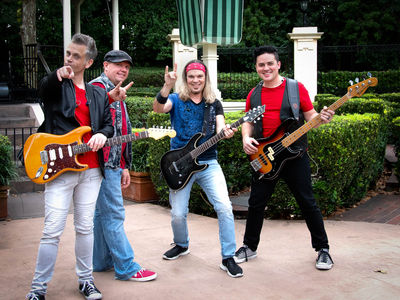 The British Revolution was a favorite nearly every day at the United Kingdom pavilion. They played '60s era British Rock. It was fun to take in a show when we were in the area during a performance. We understand that when Disney opens again, the British Revolution won't be back. Time will tell. Photo by Donald Fink. 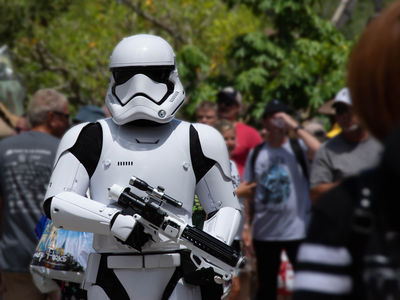 It must be a little tricky on Batuu with the First Order patrolling the streets and questioning citizens while members of the resistance are around every corner. Photo by Bonnie Fink.

Yeah, it's the Millennium Falcon. We get that. But next time you're here, take a moment and have a look at the rock formations on Batuu. It's clear that this planet has a different geologic history than that of Earth. Photo by Donald Fink. 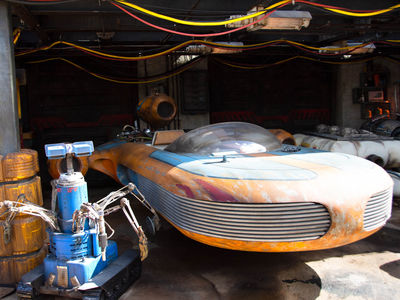 You can find all kinds of equipment at Black Spire outpost on Batuu. Here's a Land Speeder that looks like it's in an open mechanical shop, no doubt awaiting some kind of repair. Photo by Bonnie Fink. 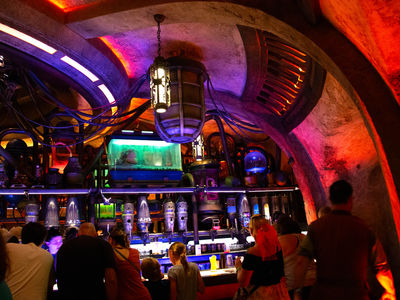 We've been to Oga's Cantina a couple of times. It's in the Black Spire Outpost on Batuu, Galaxy's Edge. This one is at Hollywood Studios in Florida. You can enjoy various alcoholic drinks here but there are several non-alcoholic delights too. Photo by Bonnie Fink. 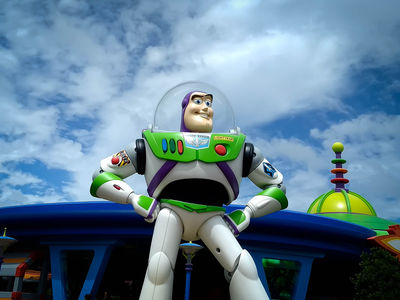 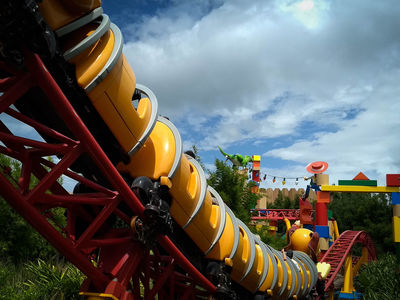 Toy Story Land at Disney's Hollywood Studios opened on June 30th, 2018. The children's roller coaster called Slinky Dog Dash was an immediate hit, with wait times often exceeding two hours. We're sorry to say that as of Disney's recent closing, we have yet to ride Slinky Dog; thinking that some day soon the wait times would be low. And we've never been successful at getting a FastPass at a time we wanted. We'll have to stop being so picky about the times and go for a ride when the park re-opens. Photo by Bonnie Fink. 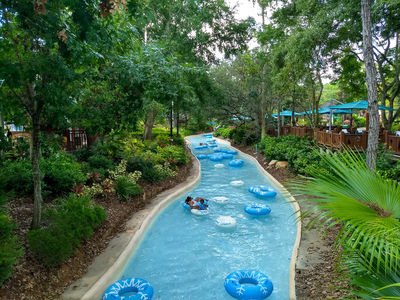 Cross Country Creek at Disney's Blizzard Beach Water Park is a lazy river that moves around the entire park. There are several entry points along the way where you can snag a tube and start your relaxing trip. If you want to get off before making a full lap, simply pick another entrance/exit point. As maybe a sign of the times, we look at this image and immediately think, "This looks like proper social distancing." Photo by Bonnie Fink. 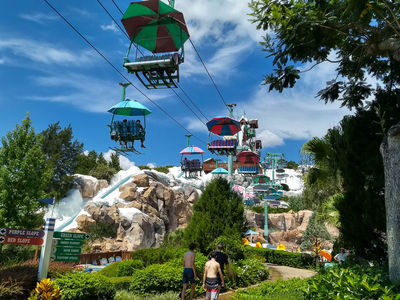 Our annual passes this year included access to the two water parks at Walt Disney World, where we might have been able to ride this chair lift to the top of Mount Gushmore and the Green Slopes. This is, of course, at Disney's Blizzard Beach Water Park at Walt Disney World. Photo by Bonnie Fink. 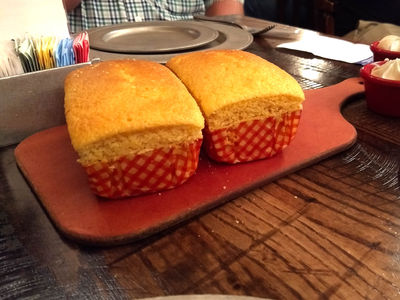 This is sweet cornbread. They hand it out like it's candy at the Hoop-Dee-Doo Musical Revue at Disney's Fort Wilderness Campground. If you're a fan of sweet cornbread, or just a fan of good food, this is a place to try. The show isn't bad either. Truthfully, we've found that this dinner show is, in our view, the best value in dinner shows in Orlando. Once Disney comes back up to speed, be sure to give this a try next time you visit. Photo by Bonnie Fink.

One of our favorite shows on Disney Property is at the Festival of the Lion King at Disney's Animal Kingdom Park, in Africa. This show usually runs several times a day. When friends or relatives are visiting, we always make a point of taking them to see this performance. Here are just a few minutes of the performance. Enjoy.

As you can see, this was a random grouping of some of our images from Walt Disney World. It wasn't meant to tell a story, but rather to help keep the magic alive in this challenging time. To select pictures for this installment, we simply started poring through our archives, picking out images that made us smile. Hopefully, some of them did for you too.