In light of the events of the past week, I decided not to return to the usual Update format this week.

MousePlanet is a website devoted mostly to sharing the happiness brought to the world by Disney. This weekly Update exists to help folks stay up to date on what is going on around Walt Disney World Resort, and to share our insights and experiences to help you have better visits.

As you ought to know by now, there remains a global pandemic, a Tropical Depression has formed in the Gulf of Mexico that could become Tropical Storm Cristobol, and, indeed, like many places across the U.S.A., Orange County, Florida, is under a newly imposed nightly 10 p.m. to 5 a.m. curfew as a result of outrage, protests, and general civil unrest since the death of George Floyd in police custody in Minneapolis, Minnesota last week.

With the point of the Update being to report on news impacting visits to the Resort, I turn first to The Walt Disney Company's corporate efforts to address the latest aspects of our world situation in a message to its cast and in public postings over the weekend. Adrienne Vincent-Phoenix reported in yesterday's Disneyland Resort Update:

Resolve in a Time of Unrest: A Message to Fellow Employees

The recent killing of George Floyd as well as other instances of lethal attacks and harassment of unarmed black citizens in our nation continue to drive outrage and calls for action by people of all cultural backgrounds, including many of our employees. Feelings of grief and anger cause us to confront the inscrutable idea that the lives of some are deemed less valuable – and less worthy of dignity, care and protection – than the lives of others.

While these devastating incidents are not new, there’s something unique about what’s happening in this moment. The pandemic coupled with these recent injustices have pushed the issues of racial disparity into the open.

We, too, are struggling to make sense of the recent tragedies that leave us feeling overcome with sorrow. While we don’t have all the answers, we resolve to use our compassion, our creative ideas and our collective sense of humanity to ensure we are fostering a culture that acknowledges our people’s feelings and their pain. We also realize that now more than ever is the time for us all to further strengthen our commitment to diversity and inclusion everywhere.

We intend to focus our efforts and resources to compassionately and constructively talk about these matters openly and honestly as we seek solutions. We intend to keep the conversation going, not just today, but for as long as it takes to bring about real change.

On Sunday, each division of the Walt Disney Company also posted this to their respective social media accounts.

As a direct result of the local civil unrest, Orlando and Orange County, Florida instituted new curfews on Sunday from 10 p.m until 5 a.m. until further notice. Walt Disney World promptly announced Sunday that the recently reopened Disney Springs shopping district would close daily at 7:00 p.m. "until further notice" so that employees and visitors could return to their homes in compliance with the new curfew.

Disney Springs had begun operating until 10 p.m when it began its phased reopening on May 20. As of the writing of this Update on Monday night, there have been no changes to the curfew, and we have not heard about other operational limitations at Disney Springs. We have heard about additional venues reopening, including Terralina Crafted Italian and Paddlefish which are now open during some of Disney Springs operating hours, and Raglan Road's quick-service Cooke's of Dublin plans to reopen tomorrow, June 3, and the table-service Raglan Road restaurant plans to reopen on June 10.

Meanwhile, except for Walt Disney World Golf, the rest of Walt Disney World Resort remains closed, but we now have some of the details of its planned phased reopening. Last Wednesday morning, the Resort presented its reopening plan to the Orange County Economic Recovery Task Force: it plans to reopen Magic Kingdom and Disney's Animal Kingdom on July 11, and then, on July 15, it plans to open EPCOT and Disney's Hollywood Studios. Disney's plan includes elements of measures put into practice when Shanghai Disney Resort reopened last month, and some of those now in use at the recently-reopened Disney Springs shopping district, including:

There are still many details to be announced, including more information about the new theme park reservation system. Disney has said that existing ticket holders and annual passholders will have priority in making these reservations, and the company has temporarily suspended the sale of all new tickets and is not accepting new resort hotel reservations (though Disney Vacation Club Members may continue to make new reservations as discussed further below). Some explanations of the new policies are now published on this page of DisneyWorld.com, and those with the My Disney Experience app installed on a mobile device with push notifications active or otherwise logging into the app may have seen alerts re-directing users to that webpage.

The Economic Recovery Task Force, Orange County's mayor, and Florida Governor Ron DeSantis all signed off on Disney's plan as presented. We discussed the plan during our live "Fun at Home" Show #8 on Wednesday night. You can also visit our Facebook and Twitter accounts for more details from the presentation, or you can watch the entire meeting on YouTube.

We discussed the details of Disney's presentation to the Economic Recovery Task Force during the first portion of our "Fun at Home" Show #8. We will discuss any new developments on Show #9, tomorrow, Wednesday, at 8:30 p.m. EDT/5:30 p.m. PDT on MousePlanet.com, Facebook and Twitter.

Disney Vacation Club properties in Vero Beach, Florida, and Hilton Head, South Carolina will reopen starting June 15; the DVC properties at Walt Disney World will reopen the following week, on June 22. Fort Wilderness Campground will also reopen on June 22. Disney did not give specifics as to which of the Disney Resort hotels might reopen, and said the two water parks will remain shuttered until further notice.

In anticipation of the system requiring guests to make theme park reservations, Walt Disney World last week canceled all existing FastPass+ bookings, dining reservations, and tickets to upcharge events like dessert parties and fireworks cruises. Extra Magic Hours are also canceled for the time being. The remaining Disney Villains After Hours hard ticket events that had been scheduled into July are all listed as "No Longer Available," and there is no word yet about late-summer and beyond after-hours events like Mickey's Not So Scary Halloween Party. Similarly, given that EPCOT is not due to reopen until July 15, the DVC Moonlight Magic event there scheduled for June 29 likely will be cancelled, and with Typhoon Lagoon not scheduled to reopen in this next phase, the DVC Moonlight Magic events scheduled there in July and August seem to be in doubt as well, though all are currently still listed on the DVC website.

Disney says it will release more details about the new theme park reservation system closer to the reopening date. Visitors planning their summer Walt Disney World vacations may wish to hold on a little longer to rebook their plans. We will discuss any additional developments on our next "Fun at Home" MousePlanet LIVE Stream, Show #9, tomorrow, Wednesday, at 8:30 p.m. EDT/5:30 p.m. PDT, on MousePlanet.com, Facebook and Twitter/Periscope.

Before we close out the Update, we share one of this past week's #DisneyMagicMoments which marked the third anniversary of the opening of Pandora-The World of Avatar at Disney's Animal Kingdom.

Imagineer Joe Rohde and Avatar (and its upcoming sequels) Producer Jon Landau discuss how the land "meshes" with the park. Video ©Disney. 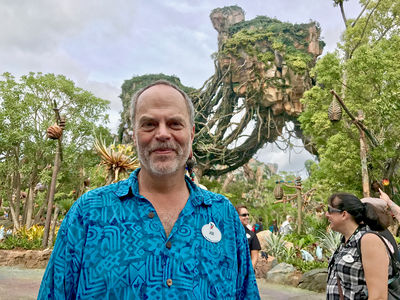 For this week's cover photo, we share this view of Imagineer Joe Rohde during the media preview inside Pandora-The World of Avatar, back on May 24, 2017. File Photo by Alan S. Dalinka.

MousePlanet and our travel partner Get Away Today regularly remind our readers that Walt Disney World Resort theme park tickets are rarely offered at deep discounts unless you are a resident of Florida or eligible for U.S. Military Personnel benefits. Historically, non-Florida residents tend to benefit the most by purchasing tickets in advance (and, of course, being mindful of the rules relevant to those tickets). As prices go up, it becomes even more important to pay heed: Don't get scammed! Never buy tickets from an unofficial or secondary outlet, such as through eBay or Craigslist. Never rent or purchase tickets from people approaching you outside Disney property stating they have remaining days or leftover tickets. This practice is against the terms of use for Walt Disney World Theme Park admissions, and may result in denial of entry. There is no way to determine if these tickets are valid until you try to use them to enter the parks. Only purchase Disney theme park tickets directly from Disney, an authorized seller, or a travel agency like MousePlanet travel partner Get Away Today.

Find all of its Universal Orlando Resort ticket specials here We had a representative from Get Away Today on the live "Fun at Home" Show #8 which is also available in the discussion above, to discuss the latest travel news, which will be especially timely following Walt Disney World's presentation of its reopening plan earlier in the day.