It’s been another month without the Disney magic, and we find that we’re missing our walks through the parks more than ever. We can go to Disney Springs these days, and while that’s certainly something, we’d like some real quality time at the parks.

This month, we’re presenting another batch of images we’ve made at Walt Disney World from the past, hoping to share a little of what we like most at Disney. 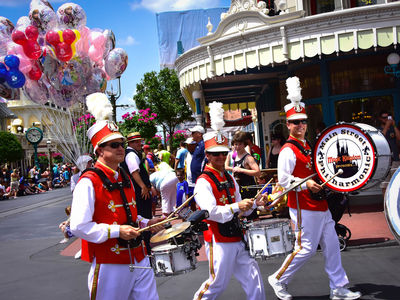 Of all the street performers at Walt Disney World, we seem to enjoy the Main Street Philharmonic the most. These guys and gals are seriously talented and seem to really enjoy performing. It should be said that we enjoy the band at Disneyland in Anaheim too. Photo by Bonnie Fink. 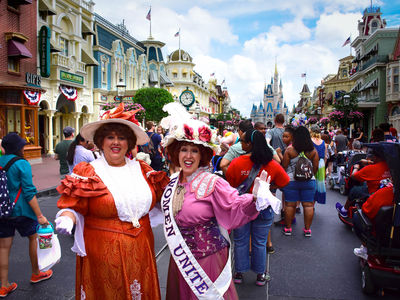 Victoria Trumpetto and Hildegard Olivia Harding roam about Main Street, drumming up support for the Women's Suffrage movement. The Suffrage Movement, as you may know, was started around 1840, attempting to gain the right to vote for women. It continued until the ratification of the 19th Amendment to the Constitution in 1920. If you speak to these women, they'll give you a piece of their mind. Photo by Donald Fink. 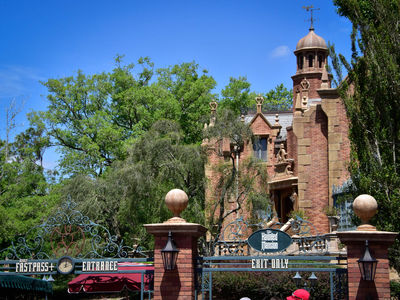 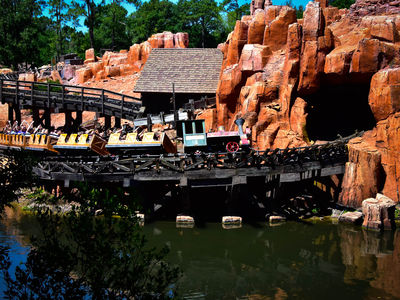 Big Thunder Mountain is a good "speed" for a family roller coaster. It's tame enough that most people can tolerate it, but exciting enough to grab your attention. The first time we rode it, we thought the landscape was over the top and too red. Then we visited Utah and discovered that the Entrada Sandstone formations of the Colorado Plateau were precisely this color. Whether you appreciate the accuracy of the color of the rocks, or just like the ride, Big Thunder Mountain is a good adventure. Photo by Bonnie Fink. 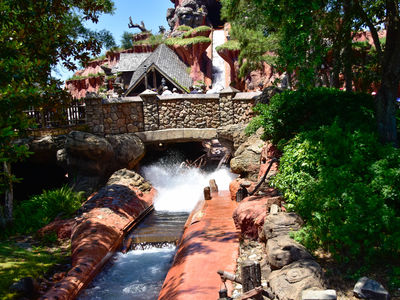 Splash Mountain is one of Bonnie's favorite rides. For Don, not so much. We've refrained from riding this exciting water adventure in the past because we usually have expensive cameras with us when we're in the parks. In the very recent past, we've been getting a lot of our material with our GoPro cameras, so water isn't a problem. This was going to be the year of Splash Mountain, at least for Bonnie. Photo by Bonnie Fink. 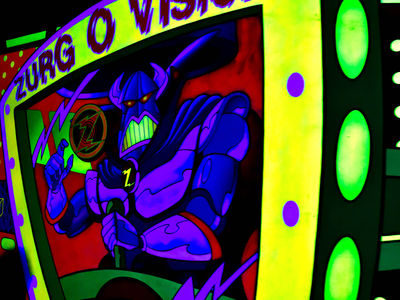 A favorite Tomorrowland ride at the Magic Kingdom is Buzz Lightyear's Space Ranger Spin. It's a slow-moving saucer that you control. It has shooting infrared laser cannons. As the story goes, Zurg—an arch-enemy of Buzz Lightyear—is stealing all the batteries from the toys to power a super weapon of destruction. Your job as a Space Ranger is to blast all the Zurg "Z" targets you can find from your spinning XP-37 Star Cruiser. It's actually quite fun. Photo by Bonnie Fink. 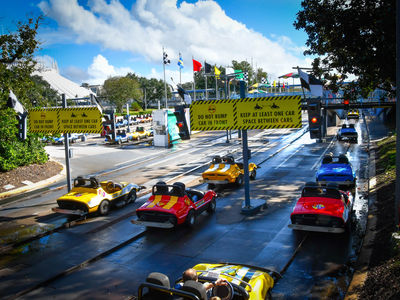 The Tomorrowland Speedway keeps getting smaller at Walt Disney World. The latest reduction comes from the new Tron ride which is still under construction. Still, even with the occasional track length re-sizing, this ride in Tomorrowland is still extremely popular. Photo by Donald Fink. 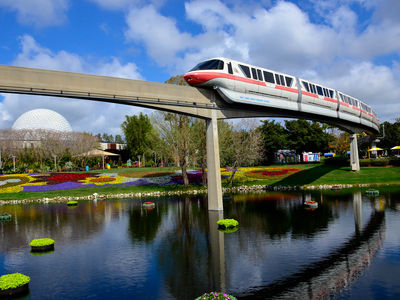 Who can pass up a view of the Monorail as it enters Epcot, especially during the International Flower and Garden Festival? Photo by Bonnie Fink. 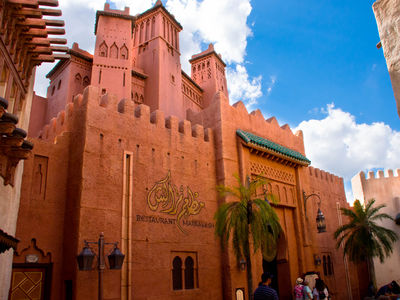 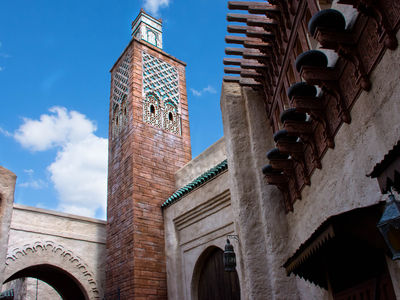 A replica of the Chellah Minaret; a 13th Century Muslim prayer tower near the city of Rabat, Morocco. Our understanding is that when Morocco was being constructed at Epcot, King Hassan II was so concerned about it being accurate that he reviewed scale models personally, and sent artisans to Florida to install some of the tile. Photo by Bonnie Fink. 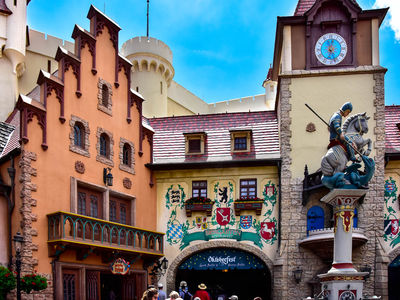 The center square of Germany has a water fountain with a statue of St. George and the Dragon. You will find similar artwork in squares all around Germany. We found one in Rothenburg, a medieval tourist town in the southern part of the country. Photo by Bonnie Fink. 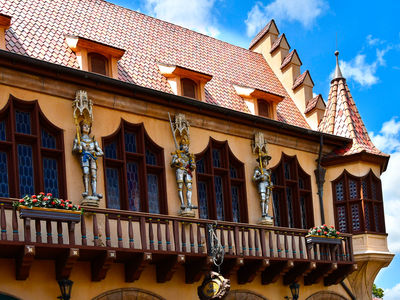 Spend some time looking at the exterior of Das Kaufhaus. It's patterned after a famous 14th century merchant haus in Freiburg im Breisgau, Germany. On the original building, there are four statues, but here at Epcot, there are three. Photo by Donald Fink. 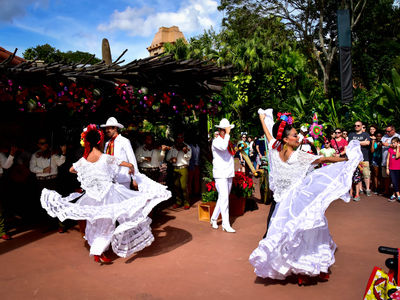 Around the holidays, you can find dancers accompanying the Mariachi band at Epcot's Mexico pavilion. The dancers perform dances from different states in Mexico, including the re-enactment of the Latin American holiday, Las Posadas. Photo by Bonnie Fink. 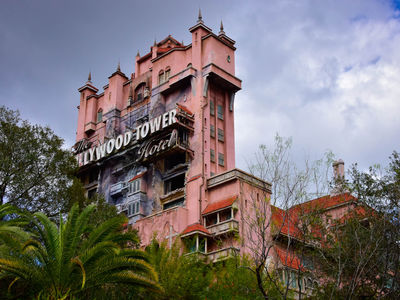 At Walt Disney World, the Tower of Terror is themed after the 1960s TV show, The Twilight Zone. And as far as we know, it will stay that way for the foreseeable future. In Anaheim, it's called Guardians of the Galaxy - Mission: Breakout. It's themed after a Guardians of the Galaxy movie from Marvel. As you may know, Walt Disney World is prohibited by contract from displaying Marvel scenes, so Twilight Zone it is! Photo by Bonnie Fink. 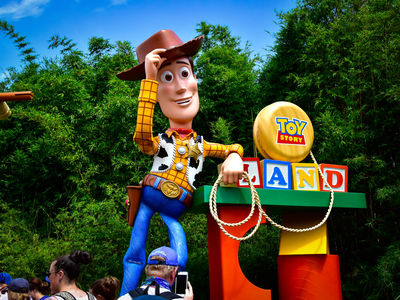 This giant statue of Toy Story's Woody is at one of the entrances to Toy Story Land at Hollywood Studios. It's a popular photo spot. Photo by Bonnie Fink. 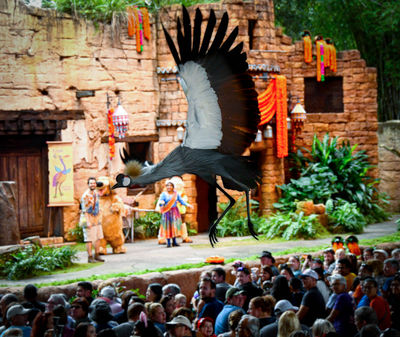 This African Crown Crane is flying over the audience at “Up! A Great Bird Adventure,” at Disney's Animal Kingdom Park. Shows like this will not be showing initially when Disney parks re-open, but most folks agree that they'll eventually return. Photo by Donald Fink. 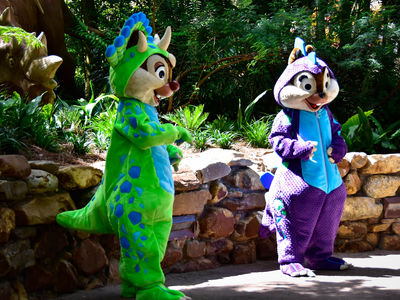 Meet Chip 'n' Dale daily at Donald's Dino-Bash. This is in Dinoland U. S. A. at Disney's Animal Kingdom. Of course, this meet ‘n’ greet is virtual only for the time being. When Disney’s Animal Kingdom Park reopens in mid-July, our understanding is that character events like this will not be part of it. Photo by Bonnie Fink. 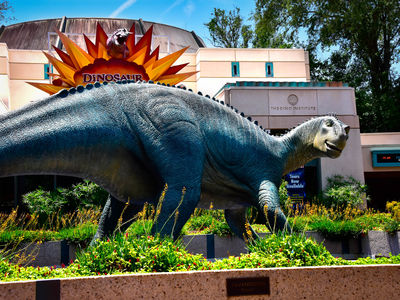 There's a ride called Dinosaur at Dinoland U. S. A., in Disney's Animal Kingdom. It takes you back in time to visit living dinosaurs with the hope of bringing one back to our current time. Unfortunately, the timing seems to go astray and when you transport back, you’re a bit too close to a major event that happened some 66 million years ago. Photo by Bonnie Fink. 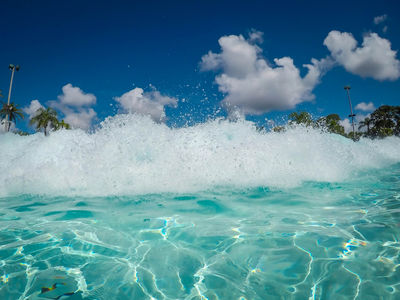 Surf's up in the Typhoon Lagoon Surf Pool. We were planning a summer of fun in Walt Disney World's two water parks this year; a great way to stay cool in the Florida heat to be sure. But as with many things in life, it was not to be. Photo by Donald Fink. 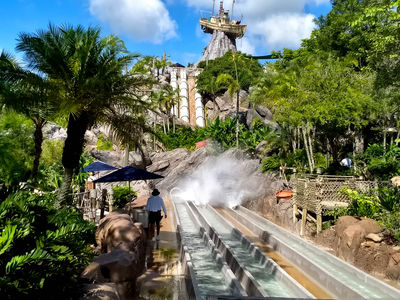 Humunga Kowabunga is about speed. You plummet down a hill inside a tube with water until you hit the brakes at the bottom. It takes just a few seconds, but be sure and hold on, to everything. Photo by Bonnie Fink.

We've said it before, but one thing we were really looking forward to this summer was the Walt Disney World water parks. We visited Blizzard Beach last summer and came away with this quick video. Take a look. Video and Photos by Don and Bonnie Fink. 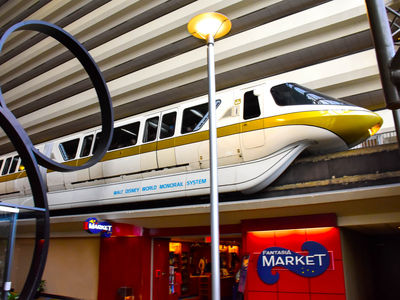 There's something special about seeing the Monorail moving through the inside of the lobby at Disney's Contemporary Resort. For us, this never gets old, and even in the 21st century, this is still new. Photo by Donald Fink. 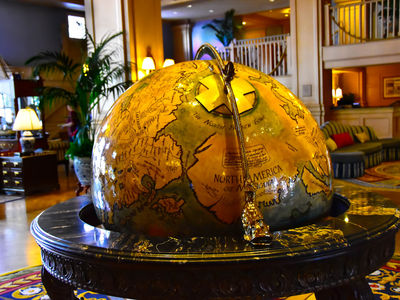 This is a replica of a world globe from 1651 in Italy and depicts the view of the earth as understood at that time. The globe is located in the lobby of Disney's Yacht Club Resort. It's fascinating how accurate the maps were considering the technology available at the time. Photo by Bonnie Fink. 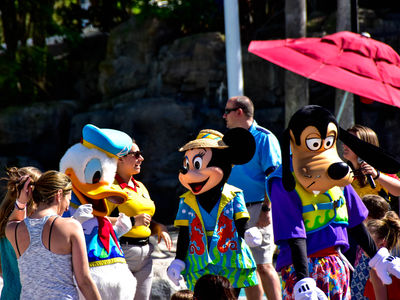 We found a poolside dance party at Stormalong Bay, the pool shared by the Yacht and Beach Club at Walt Disney World. Photo by Bonnie Fink. 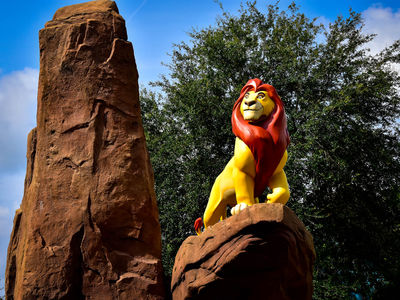 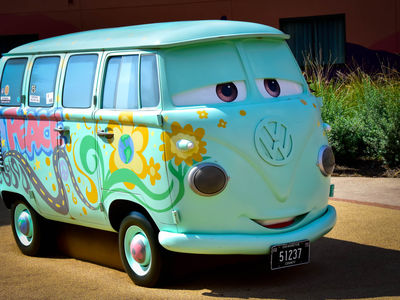 Fillmore, the Hippy VW Bus can be found in the Cars section at Disney's Art of Animation Resort. Notice the license plate. It shows the number 51237, which represents the birth date for George Carlin, the first voice of Fillmore. Carlin's birth date was May 12, 1937. After he passed in 2008, the voice of Fillmore was taken over by LLoyd Sherr. Photo by Bonnie Fink.

2020 seems to be shaping up as the year we'd all like to get past. The fact that we live literally within eyesight of the Happiest Place on Earth but can't get there doesn't help. As we spend our days essentially sequestered in our homes, only venturing out for some of the more vital necessities, we wait. And we're all aware that when the parks open again, they won't be the same as they were. They will have changed, and of course, we will have changed too. Hopefully for the good.