Yesterday marked the reopening of Disney's Hilton Head Island and Vero Beach Resorts. Hong Kong Disneyland is set to reopen on Thursday using a reservation system and procedures similar to those employed at the already re-opened Shanghai Disney Resort which resumed operations last month. Next Monday, Disney's Fort Wilderness Resort & Campground and most of the Disney Deluxe Villa Resorts are due to reopen. Then, if reopenings remain on track, Magic Kingdom and Disney's Animal Kingdom are due to reopen on July 11, with EPCOT and Disney's Hollywood Studios following suit on July 15, each also utilizing a reservation system to ensure limited capacity in addition to all the other enhanced measures announced. Disneyland announced that its proposal to reopen the California parks on July 17, Disneyland's 65th anniversary. 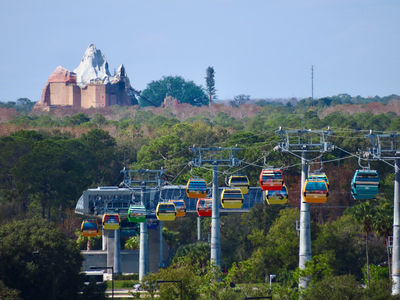 This week's cover photo shows the view back in January from atop Disney's Riviera Resort, which is due to reopen next Monday, all the way to Disney's Animal Kingdom, with is due to reopen on July 11. There has not yet been an announcement as to whether the Disney Skyliner will be among the transportation options reopening when the parks reopen (or otherwise). Photo by Alan S. Dalinka.

Last week, we described the "know before you go" information Disney has published so far for visiting the resorts and the parks in their next phase of operation in light of the global pandemic. As of publication, we have not seen additional details and, of particular interest to those planning on going to the parks as soon as they reopen, we have not yet seen details of the new reservation system as it will be used at the parks in the United States, and park ticket sales are still suspended. Likewise except for Disney Vacation Club, Disney has not resumed taking new hotel reservations.

Now, perhaps, more than ever before, it is important for guests to inform themselves of the rules and procedures to ensure the smoothest possible visits, especially when traveling from beyond Central Florida for a visit. Indeed, the situation remains very fluid, and the pandemic has not ended. As we have noted before, the Official DisneyWorld.com website posts the following warning on quite a few of its pages:

An inherent risk of exposure to COVID-19 exists in any public place where people are present. COVID-19 is an extremely contagious disease that can lead to severe illness and death. According to the Centers for Disease Control and Prevention, senior citizens and Guests with underlying medical conditions are especially vulnerable. By visiting Walt Disney World Resort you voluntarily assume all risks related to exposure to COVID-19.

As Adrienne Vincent-Phoenix noted in yesterday's Disneyland Resort Update, a Change.org petition started by Disneyland fans (and now signed by over 35,000 people) asks Disney to reconsider the proposed July 17 reopening of the California parks until "a later date when cases of Covid-19 drop and Health Officials state it is safer for everyone." Here, in Central Florida, at least one local infectious disease expert told Orlando ABC-TV affiliate WFTV-9 that she also believes that the parks are reopening too soon and that it is "likely too soon for crowds to be rushing back to Central Florida’s theme parks." As of publication, the other major theme parks have all reopened (Universal, Sea World, Busch Gardens, and LEGOLand), as have many of the smaller attractions like Gatorland, Fun Spot, The Wheel at IKON park (aka Orlando Eye).

In our "Fun at Home" Show #10 last Wednesday night, we spoke with Dewayne Bevil, one of the tourism reporters for Orlando Sentinel about his experiences visiting several of the reopened attractions around Central Florida. From temperature screenings, to face coverings, to social distancing, Dewayne's observations and experiences at the other parks to date (plus, of course, Disney Springs), gives us all a sense of what the Disney Parks experience will be like, especially in light of what Disney has announced so far.

Since our last Update, we also learned the sad news that Give Kids The World Village, the Central Florida-based nonprofit that fulfills wishes for critically ill children and their families, will remain closed for an undetermined period of time due to the global pandemic. As part of the closure, the organization will be forced to lay off 86% of its staff effective Saturday, June 27, 2020. A small team will remain to ensure the safety and security of the Village and to prepare for its eventual re-opening. You can read more information and make a donation at its website.

On a more cheerful note, I can personally report that the previously-announced (and begun then halted) reimagined paint scheme for Cinderella Castle is, once again, making progress toward completion. As I drove behind Magic Kingdom on Reams Road yesterday on my way to and from a grocery order pick-up, I spotted freshly painted upper parts of the castle and its spires along with a tall crane hovering above and, at least, a few members of what looked to be the paint crew.

Yesterday, the newest #DisneyMagicMoments video showed off a sunrise at Cinderella Castle (from sometime before the current painting project began). Video ©Disney.

Coming up tomorrow, Wednesday, June 17, at 8:30 p.m. Eastern/5:30 p.m Pacific, we will again be live with any late-breaking Disney news, and then we'll be joined by with special guest, actor Donn Lamkin. If you have visited the parks of Walt Disney World Resort over the past 30 years, you have probably seen and/or heard Donn on more than one occasion, and he will share stories of his years of serving as an entertainment host and performer. 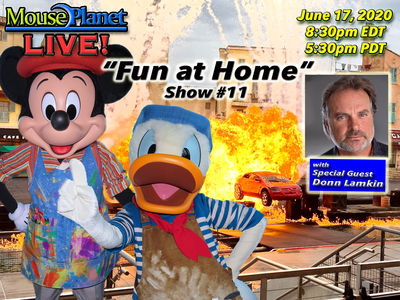 "Fun at Home" Show #11 begins at 8:30 p.m. Eastern/5:30 p.m. Pacific, Wednesday, June 17, 2020. A countdown clock and brief pre-show will begin a few minutes before showtime. If you have loaded this page before the pre-show begins, be sure to refresh your browser to see the show.

During our live shows, share comments with us: @MousePlanet on Facebook, Periscope and Twitter. In fact, as Adrienne mentioned in yesterday's Disneyland Resort Update, there will be an opportunity to respond during the show with our new weekly keyword that she revealed to win a prize from the MousePlanet archives. As we mentioned on the show the past couple of weeks, the opportunity may come late in the show, so stay tuned!

Following last month's news that the NBA plans to restart its 2020 basketball season at Walt Disney World Resort, this week, Disney Parks Blog announced that Major League Soccer will also resume its season with the MLS is Back Tournament at ESPN Wide World of Sports Complex from July 8 to August 11. According tot he announcement, all 26 MLS clubs will compete in "a continuous schedule of 54 total matches that will take place nearly every day" and will count in the 2020 MLS regular season standings. The matches will be held without spectators, and MLS players and staff will be required to follow specific medical protocols, including regular testing. The tournament winner also earns a spot in the 2021 Scotiabank Concacaf Champions League. More tournament information is available at mlssoccer.com.

A few more details about the NBA's planned restart at Walt Disney World Resort in July were also released by the NBA this week, and several others apparently were obtained by the Associated Press and published in an article on NBA.com. 22 teams are slated to play at Walt Disney World, with players required to undergo coronavirus testing starting later this month. The NBA is also working on plans for the eight teams (Atlanta, Charlotte, Chicago, Cleveland, Detroit, Golden State, Minnesota and New York) that are not part of the plans for Walt Disney World play. Until at least August 30, spectators, family, and guests of teams will not be permitted at or around the NBA events; on August 30, limited family members and guests will be permitted on Disney property for Conference Semifinals and finals, and the NBA finals in September and October.

MousePlanet and our travel partner Get Away Today regularly remind our readers that Walt Disney World Resort theme park tickets are rarely offered at deep discounts unless you are a resident of Florida or eligible for U.S. Military Personnel benefits. Historically, non-Florida residents tend to benefit the most by purchasing tickets in advance (and, of course, being mindful of the rules relevant to those tickets). As prices go up, it becomes even more important to pay heed: Don't get scammed! Never buy tickets from an unofficial or secondary outlet, such as through eBay or Craigslist. Never rent or purchase tickets from people approaching you outside Disney property stating they have remaining days or leftover tickets. This practice is against the terms of use for Walt Disney World Theme Park admissions, and may result in denial of entry. There is no way to determine if these tickets are valid until you try to use them to enter the parks. Only purchase Disney theme park tickets directly from Disney, an authorized seller, or a travel agency like MousePlanet travel partner Get Away Today.

Find all of its Universal Orlando Resort ticket specials here We had a representative from Get Away Today on the live "Fun at Home" Show #8 which is also available in the discussion above, to discuss the latest travel news, which will be especially timely following Walt Disney World's presentation of its reopening plan earlier in the day.