Hopefully you've enjoyed a safe Independence Day weekend. If nothing else, remember that Hamilton has debuted on the Disney+ streaming service, well-ahead of its original announced debut. 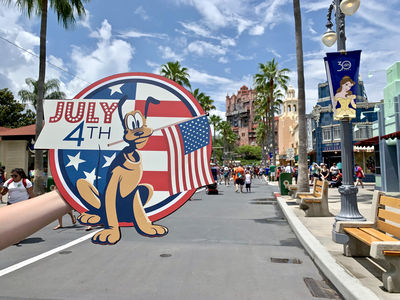 Florida continues to report testing results with very high numbers of newly COVID-19 infected people, including in Orange County, where Walt Disney World Resort is predominantly located. Last night, Orlando Sentinel reported that five Central Florida hospitals have reached capacity in their intensive care units, and that Orange County-wide, 17% of ICU beds remain available. According to the report, Orange County hospitals had 511 beds available, with 499 ventilators, 58 ICU beds for adults and 46 ICU beds for children at the snapshot in time the available data was reviewed. To contextualize the data a bit, the article also says:

Hospitals have attributed some of the reduced capacity to their return to normal operations, including restarting elective procedures that were put on hold for several weeks. Central Florida hospitals say they have enough capacity even though the COVID-19 hospitalization numbers have been steadily increasing.

A statewide emergency executive order continues to prohibit establishments that derive more than 50% of their revenue from the sale of alcohol from serving alcohol except for take-out. In other words, "bars" may not serve guests indoors, while table service restaurants may continue to serve alcohol to guests seated within their socially distanced, limited capacity. Many Florida counties, including Orange County, continue to require folks to wear face coverings in most public settings, and many businesses, including Disney Springs and the re-opened hotels, Universal Orlando and Sea World are requiring visitors and staff to wear them in public spaces as well, except when dining (or swimming at the hotels). When Walt Disney World theme parks begin their phased reopenings this week, face coverings will be required there as well.

While Florida also continues to require that all individuals entering the state from the New York Tri-State Area (Connecticut, New Jersey, and New York) to isolate or quarantine for a period of 14 days from the time of entry into Florida or the duration of the individual's presence in Florida, whichever is shorter, folks who visit Florida or otherwise travel from Florida to other states or cities are increasingly required to self-quarantine for 14 days before traveling freely around those states. The City of Chicago, for example, recently issued a requirement that those arriving from a list of more than a dozen states self quarantine upon arrival, including Florida.

As Adrienne Vincent-Phoenix reported in the Disneyland Resort Update yesterday, the Disney College programs at both the Disneyland Resort and the Walt Disney World Resort have been suspended until further notice. The company rescinded offers of employment for participants scheduled to start this fall, and said it will refund program fees already paid.

Actors' Equity Association, the labor union that represents professional actors and stage managers, including theatrical performers at Walt Disney World Resort, has called on Disney to postpone the reopening of the Florida parks since Disney postponed reopening Disneyland in June. According to a press release, the union objects to Disney's refusal to "provide regular testing to one of the few groups of workers in the park [actors] who by the very nature of their jobs, cannot use personal protective equipment." Deadline.com reports that Disney has agreed to provide COVID-19 testing for film productions, but the union has not reached an agreement with Disney for performers in the parks.

Yesterday, Orlando Sentinel reported that Bank of America temporarily closed about 50 Central Florida branches, "as part of a shuttering of locations in cities across the nation amid the coronovirus pandemic. It also reported, "Ronald McDonald House Charities of Central Florida is closing down all of its locations until July 18, after people at its facilities tested positive for COVID-19." 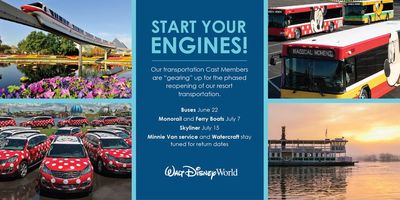 Disney Transportation options are being phased in as well. Image ©Disney.

As of our publication, Magic Kingdom and Disney's Animal Kingdom remain on track to reopen to the public, with Passholder previews on July 9 and 10, and its previously-announced (socially distanced, limited-attendance) operations on July 11, and with Epcot and Disney's Hollywood Studios following suit on July 15. As we mentioned last week, the new Disney Park Pass System is now open for park-goers to make advance reservations to the parks. My Disney Experience is again selling some categories of park tickets for 2021, but it notes that guests should check the Disney Park Pass System for park availability before purchasing tickets. New 2020 park ticket sales have not yet resumed. As we noted last week, new 2021 hotel reservations are also available. MousePlanet's travel partner, Get Away Today, visited with us on on "Fun at Home" Show #12, and shared the news that its agents are ready to help guests book new hotel reservations.

On Friday, Disney shared a video of Walt Disney World Cast Members returning to the Resort for health and safety training ahead of the upcoming re-openings. Video ©Disney.

As we suggested last week, folks planning to visit the parks and resorts should, in particular, keep an eye on the "Know Before You Go" pages of DisneyWorld.com. 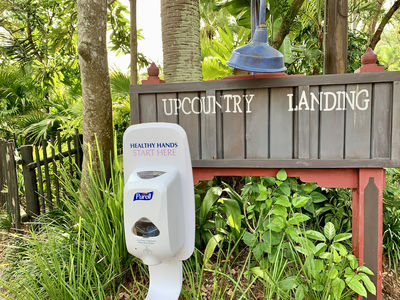 Back in March, just before the temporary closure of Disney Parks, additional Purell dispensers were installed around Walt Disney World, including this one at Disney's Animal Kingdom. March 6, 2020 File Photo by Alan S. Dalinka.

Tomorrow, July 8, Major League Soccer restarts its 2020 season with all 26 MLS clubs competing in the "MLS is Back Tournament" at ESPN Wide World of Sports Complex. The tournament will be played without fans in attendance Group stage matches will count in the MLS regular season standings and the tournament winner will earn a spot in the 2021 Scotiabank Concacaf Champions League. Teams began arriving on June 24, and the tournament is scheduled to hold its final on August 11.

Following last week's finalization of the National Basketball Association's plan to resume play at Walt Disney World, reported by Disney Parks Blog, this week, the teams begin arriving at the Resort. The NBA plans to complete the pandemic-interrupted 2019–20 season, with practices and then games at ESPN Wide World of Sports Complex in the Arena, HP Field House and Visa Athletic Center. Games will begin on July 30, with 22 teams that will compete to determine seeding for the NBA Playoffs. The playoffs and NBA Finals will end by October 13. The games will be held without spectators.

The players, coaches, referees, support personnel, and others will be housed on property separate from other guests. Orlando Sentinel reported that today begins the first phase arrivals, welcoming teams that will be staying at Disney's Grand Floridian, including the Orlando Magic; the second group arrives on Wednesday and the third on Thursday. Training for the first group begins on Thursday following a two-day quarantine. According to the Sentinel:

Players, coaches and staff will be required to remain on the Disney campus for the duration of the restart, and daily COVID-19 testing will be among the safety procedures. If a player leaves, he will be subject to at least a 10-day quarantine upon his return and must show two negative COVID-19 tests before being allowed to play again.

And, starting this Friday, July 10, Splitsville Luxury Lanes Orlando will reopen to the public at Disney Springs, including its bowling lanes. Splitsville closed back on March 16, as Disney Springs shut down operations. Phased reopening of Disney Springs began back in May, and many retail and dining experiences have opened with new health and safety enhancements, as well as measures to promote social distancing. Splitsville joins the recently reopened House of Blues and City Works Eatery and Pour House on the West Side, and it posted a video on twitter highlighting what to expect when visiting the reopened venue.

So what should you expect from us when we REOPEN this Friday from @DisneySprings? Glad you asked! 🙌

Your safety & health is our top priority, that's why we've taken great measures to make all our guests feel comfortable.

As Steve Harvey often says at the start of Family Feud episodes, "We've got a good one for you." Join us tomorrow, Wednesday, July 8, at 8:30 p.m. Eastern/5:30 p.m Pacific, for "Fun at Home" Show #14, our MousePlanet LIVE! stream, where we will have the latest news about the phased reopening of Walt Disney World Resort along with any other late-breaking Disney news. We have a couple more special guests lined up, and our MousePlanet Contributors will be on hand chatting about "All Things Disney" sharing what they have been cooking up at home. 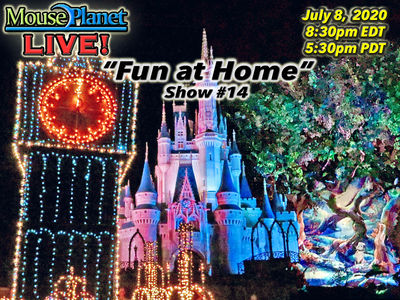 A countdown clock and brief pre-show will begin a few minutes before showtime. If you have loaded this page before the pre-show begins, be sure to refresh your browser to see the show. A replay will also be available here after the show is concluded.

…Since Disney Parks were not launching Fourth of July fireworks to celebrate Independence Day this year, Disney Parks Blog shared a replay of the 2019 Magic Kingdom spectacular.

Fourth of July fireworks at Magic Kingdom are one of the few times each year that a "mirror" launch location in Seven Seas Lagoon is added with park-perimeter fireworks to provide a full 360° spectacular. Video ©Disney.

With Disney now accepting Resort Hotel reservations for 2021, our travel partner Get Away Today is available to help you book rooms and packages. Remember, of course, Disney has temporarily paused new park ticket sales, and, at present, requires guests to use the Disney Parks Pass System to reserve dates for guest park visits.

As always, we remind our readers that Walt Disney World Resort theme park tickets are rarely offered at deep discounts unless you are a resident of Florida or eligible for U.S. Military Personnel benefits. Historically, non-Florida residents tend to benefit the most by purchasing tickets in advance (and, of course, being mindful of the rules relevant to those tickets). As prices go up, it becomes even more important to pay heed: Don't get scammed! Never buy tickets from an unofficial or secondary outlet, such as through eBay or Craigslist. Never rent or purchase tickets from people approaching you outside Disney property stating they have remaining days or leftover tickets. This practice is against the terms of use for Walt Disney World Theme Park admissions, and may result in denial of entry. There is no way to determine if these tickets are valid until you try to use them to enter the parks. When available, only purchase Disney theme park tickets directly from Disney, an authorized seller, or a travel agency like MousePlanet travel partner Get Away Today.