The popular Oogie Boogie Bash at Disney California Adventure has become the latest in a series of events cut short or called off entirely due to the global pandemic. 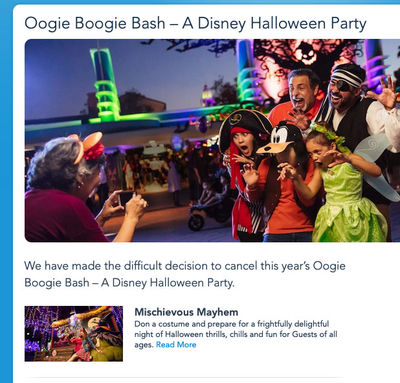 Disney has canceled the Oogie Boogie Bash for 2020. Photo © Disney.

"As we continue to work toward a reopening plan for our theme parks and follow guidance from appropriate health and government officials, we have made the decision to not bring Oogie Boogie Bash – A Disney Halloween Party back this year. Given theme park guidelines have yet to be released by the state, and Oogie Boogie Bash requires a substantial amount of planning and coordination, we are unable to bring the event back at this time." 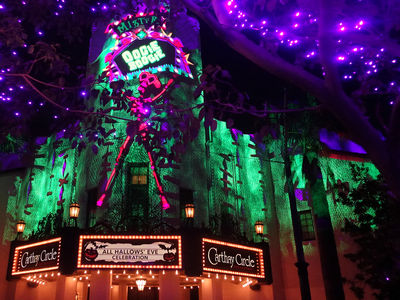 The announcement came the same day that Universal Studios shared that the Halloween Horror Night events in California and Orlando had been canceled. Walt Disney World canceled its popular Mickey's Not-So-Scary-Halloween Party earlier in the year, and issued refunds to customers who had already purchased tickets to that event.

Oogie Boogie Bash debuted at Disney California Adventure in 2019, and replaced Mickey's Halloween Party previously hosted at Disneyland. The after-hours event was held on 20 nights in September and October, and required separate admission. Tickets ranged from $110 to $145 per person, and all event nights sold out in 2019.

Oogie Boogie Bash offered Disney fans young and old the opportunity to dress up and experience trick-or-treat stations and themed entertainment in the park. The 2019 event included the debut of a new Frightfully Fun Parade, and a Halloween-themed World of Color show called "Villainous!"  One of the most popular elements of the event was the Halloween overlay of the Redwood Creek Challenge Trail, which featured specialty lighting and projection effects. 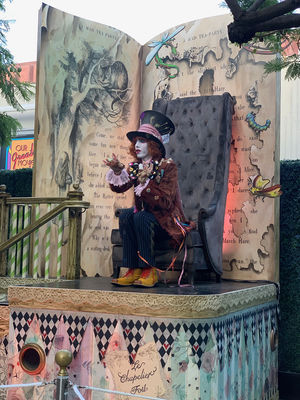 The Mad Hatter is physically distanced from the crowd along one of the themed treat trails at the Oogie Boogie Bash. MousePlanet file photo.

Oogie Boogie Bash also made use of a new meet-and-greet technique that Disney would replicate in the name of physical distancing as parks reopened under new physical distancing protocols. Disney characters appeared on elevated stages along the treat trails, which allowed visitors to see and sometimes interact with them, but not stop for individual photo or autograph sessions.

Asked if Disney still planned to install the Halloween Time overlay at Disneyland and Disney California Adventure if the theme parks are allowed to reopen by the fall, a spokesperson said, "We continue to work toward a reopening plan for our theme parks and follow guidance from appropriate health and government officials. We will share more information on our Halloween plans when we are able."