Disney California Adventure Park celebrates 20 years in a few months. Wow! How did that happen? It seems like only yesterday I was working opening day in Greetings From California (now Elias & Co.). Currently, too many factors are unknown as to whether or not Disneyland Resort will even be open by February, 2021, but fingers are crossed that all Disney theme parks will welcome guests back and DCA can celebrate a well-earned birthday.

In celebration of the big 2-0, I thought I'd share a bit about the original "lands" and the changes that have swept through each since 2001. This article is the first in a four-part series showcasing those four "lands": Sunshine Plaza, Hollywood Pictures Backlot, Golden State and Paradise Pier. (A Bug's Land, Cars Land and Buena Vista Street were all added later.) So, relax, maybe put on some Soarin' Over California theme music and let's glide through Disney California Adventure Park's past-Disney-style.

A second Anaheim Disney theme park had been discussed for years, but it wasn't until the 1990s that it came to fruition. A Disney Seas idea floated around due to the fact Disney happened to own both the docked Queen Mary and Howard Hughes' behemoth plane, The Spruce Goose, in nearby Long Beach. That idea was nixed and it sailed off to become Tokyo DisneySea Park. Next up was a WestCot (think Epcot) design but it was deemed too expensive, especially after the hefty price tag affixed to Disneyland Paris' opening. Then-CEO Michael Eisner, organized a weekend brainstorming retreat and the concept for a California-themed park was the result.

The first thing you noticed about Disney California Adventure entrance was the almost 12-feet tall letters that spelled out CALIFORNIA. Hard to miss those, right? Those letters developed a cult-like following. I know I had plenty of photos taken in front of them, especially the "L". And, Disney added seasonal elements dressing them in candy corn colors (Halloween), red/white striped (Christmas) and even the two As became Angels' As when the (then) Anaheim Angels won the World Series. That really was a lifetime ago.

Behind the letters was an intricate, beautiful, two-piece mosaic mural depicting California icons including sea life, redwood trees, missions and L.A. landmarks. San Pedro based artists, Theodora Kurchiev and Dimitri Lazaroff, designed the gorgeous visual and went on to commission the large 3D tile work at Tokyo DisneySea. For locals, the same artistic team also created the fountain tile work at Aquarium of the Pacific in Long Beach. 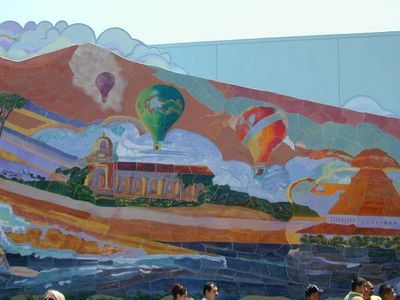 Hot air balloons and a California mission showcase part of the history and diversity of The Golden State represented on the giant mosaic mural. Photo from MousePlanet Archives.

Standing behind the mosaic was a mini-version of perhaps the Golden State's most iconic landmark—The Golden Gate Bridge. The facade actually acted as a cover for the monorail track and, no, there was no intention of a monorail stop inside the new park. (However, if you happen to visit Disney's Grand California Hotel and Spa, take note of the flight of stairs leading up from the lobby to the second floor. The stairway is wider than a typical stairway. This is because the monorail was originally planned to stop inside the new hotel. The second floor was deemed the docking station but due to external situations-time, money, etc.-the project was dropped.) Back to California Adventure. Peeking behind the Golden Gate Bridge was the Sun Icon Fountain which was a wave fountain with a huge, golden metal sun displayed atop. The whole layered look, starting with the CALIFORNIA letters and ending with the sun sculpture, projected a 3D image postcard welcoming you to California. It really was an extraordinary visual delight. 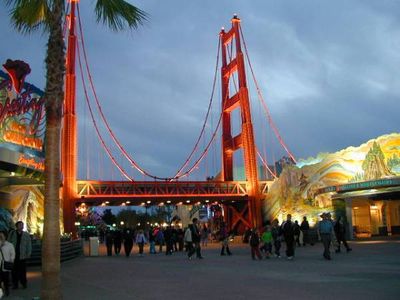 Once through the gates, the corridor leading to the Sun Fountain was flanked by the two resident stores—Greetings from California and EnginEars Toys. Greetings From California's tagline was "Everything Under the Sun" and that's exactly what it offered guests. The store was the counterpart to Disneyland's Emporium but rather than one big shop, it was comprised of seven individual California-themed rooms: Bear (plush/toys), Beach (children's clothing/housewares), Under the Sea (photo pick-up), Souvenir (accessories/souvenirs), Boulevard (adult apparel), Hollywood (collectibles, hardlines), and Poppy (candy). Each room had its own decor and personality. I have to admit, the Poppy room was a favorite of mine with the cookies and krispy treats readily available for lunches and breaks. Hey, don't judge. 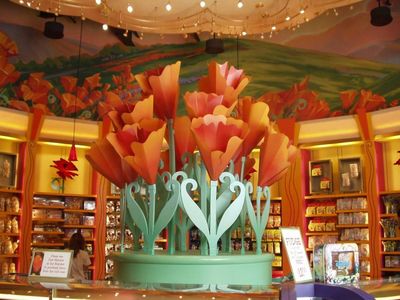 The Poppy Room inside of Greetings From California was the go-to place for sweet treats and take-along snacks. Photo from MousePlanet Archives.

Across the way, EnginEars Toys housed train-themed merchandise and well…toys! The shop itself was the "caboose" to the makeshift California Zephyr train in Sunshine Plaza. Again, theming is everything with Disney so in addition to the shop's interior resembling a train depot, the cast members also wore engineer caps.

Merchandise comes and goes quickly in Disney theme parks. Right now, it's all about Spirit Jerseys and Loungefly backpacks. But 20 years ago, aside from film (ask your parents), Sunshine Plaza had the two hottest sellers. In Greetings, all the plush grizzly bears (representing Grizzly Peak) were popular items but none more than the bear paws (think the white Mickey Mouse gloves) that growled when you smacked them together. (They're currently available on eBay running about $30 each.) EnginEars Toys' biggest merchandise had to be the wooden train whistle. Toot-toot!

Adjacent to the EnginEars Toys "caboose," were the two food locations inside Sunshine Plaza—Baker's Field Bakery and Bur-r-bank Ice Cream. (Disney California Adventure Park is big on the puns.) Both establishments made up the train's mid-sections and were designed to resemble zephyr cars complete with sliding doors.

Baker's Field Bakery offered typical pastries, desserts and sandwiches. Oh, and coffee. The acrid scent wafting through the air will always be remembered by those of us who worked Sunshine Plaza when the coffee beans were roasting. In fact, guests asked us on a daily basis what was burning nearby. One guest even reported to a cast member in EnginEars Toys that a garbage can was on fire. No, it was just the burnt coffee smell. Here, have a train whistle.

Although not a food location, I want to mention that the makeshift train featuring the two eating locations and EnginEars Toys showcased an actual California Zephyr engine cab which was a replicated facade built by Imagineers. It was a popular point of interest even though it was just a prop.

Sunshine Plaza was devoid of any attractions but the original parade–Disney's Eureka! A California Parade–stepped off in Sunshine Plaza, so I'm including it here.

Roughly running 12 minutes, Eureka! showcased California's diversity. The Eureka! muse connected the parade by appearing as different California segment on each main float, five in all—sun, Hispanic-influence, L.A. icons, surf and Chinatown. Some of these floats were amazing! (They've since been repurposed for additional parades viewed in DCA). Roller-bladers, trapeze artists, dancers, flag bearers and stilt walkers were just a few of the outrageous performances showcased on and around the various floats. One of the most impressive stunts was a drummer who was suspended on a cable and would drop down to hammer on a large drum. (This was on the L.A. icon float.) Two of my favorites were the walk alones following behind the Chinatown float—a stilt walker dressed as a box of takeout noodles and a cast member dressed as walking fortune cookie.

Walt Disney always said Disneyland would never be completed, that it would continue to grow as long as there is imagination in the world. This was Disney California Adventure's motto. The park weathered some rough first years due to a lack of reception from guests and critics. Various reasons cited included a smaller venue, lack of Disney characters in the park, minimal attractions for little ones, and then 9/11 happened less than eight months after opening. After years of quick fixes to right the struggling park, Disney finally announced in 2007 a $1 billion overhaul. Construction began to change Sunshine Plaza to Buena Vista Street, which was to represent the era in which Walt Disney first lived in Hollywood—the 1920s. Slowly, the original icons of Sunshine Plaza disappeared. In 2010, the ornate tile mosaic was dismantled. A year later, the beloved CALIFORNIA letters were removed followed by the California Zephyr engine. But not to worry, the letters currently welcome guests to Cal Expo fairgrounds in Sacramento and the engine is displayed at the Western Pacific Railroad Museum. Buena Vista Street opened to the public the summer of 2012.