After publication of our last Walt Disney World Resort Update last week, Actors Equity Association, the union that represents many actors and other performers at Walt Disney World Resort (and elsewhere), reached agreement over remaining issues for the conditions under which those performers could return to work, including on-site COVID-19 testing for cast members. As of this publication, we have not heard when the Resort will recall any of those union performers, but we except some may be recalled in the coming weeks. 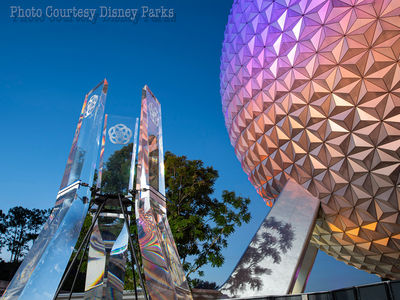 As we continue to advise, if you plan to visit, be sure to check the latest requirements of the Disney venue you plan to visit. You can review Disney's requirements here. If you are traveling from out of state, be sure to check your home area's self quarantine restrictions for those that travel to and from Florida. And, of course, keep an eye on the National Hurricane Center's reports; as of last night, Orlando Sentinel says that the NHC is tracking two tropical waves out in the Atlantic Ocean that show potential for development in the next five days in the direction of the southeastern areas of North America. Tropical Storm Josephine did manage to form last week, and, fortunately, dissipated out at sea.

Like the National Basketball Association, Major League Soccer restarted its season within the confines of Walt Disney World Resort this summer. As Disney Parks Blog reported:

After 51 matches in 35 days at ESPN Wide World of Sports Complex, the MLS is Back Tournament concluded last [Tuesday] night with a 2-1 victory by the Portland Timbers over Orlando City SC. The tournament marked the restart of the league’s milestone 25th season and a return of professional sports, bringing brought approximately 750 players and 500 MLS staff to ESPN Wide World of Sports.

Like their counterparts in the "NBA Bubble," the MLS is Back Tournament had strict health and safety guidelines for players and staff, including regular testing and health screenings. Practices and games were all held without public spectators. Outside of practices and games, MLS players played the Walt Disney World Golf Courses and spent time poolside at the Walt Disney World Swan & Dolphin Resort. According to Disney Parks Blog, "The Portland Timbers even celebrated their tournament victory last [Tuesday] night by jumping into the pool with the trophy!" 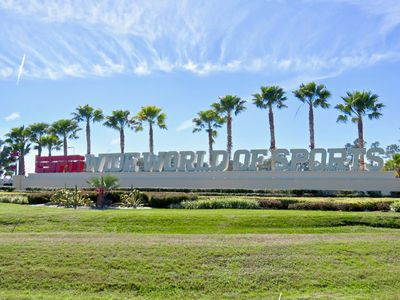 As regular readers and Disney Parks fans know, Joe Rohde, Portfolio Creative Executive, Walt Disney Imagineering, was the leader of the team that created Disney's Animal Kingdom. He has extensively travelled the world over the past 40 years, and, indeed, has brought all sorts of artifacts back to the parks (and, as legend has it, his home). Earlier this month, Joe Rohde and his family released part one of a five part video series focusing on the design and inspiration of Disney's Animal Kingdom as part of the #DisneyMagicMoments collection offered by The Walt Disney Company. This past week, they released part two, focusing on the role of "ageing and patina" in Disney storytelling.

…Though the parks of Walt Disney World Resort have curtailed fireworks as part of its measures to discourage social situations that aid the spread of COVID-19, Disney Parks Blog reports that guests staying in the reopened resort hotels may now enjoy pre-recorded #DisneyMagicMoments viewing of "Happily Ever After" on demand in their rooms.

…At home (or wherever your internet-connected devices may take you), Disney+ subscribers will be able to get a look at the "Magic of Disney's Animal Kingdom" starting on September 25. The National Geographic produced, eight part docu-series, "will provide an all-access pass to explore the magic of nature within Disney's Animal Kingdom Theme Park, Disney's Animal Kingdom Lodge and The Seas with Nemo & Friends at EPCOT, and it's the ultimate tribute to the magnificent array of more than 300 species and 5,000-plus animals cared for by our dedicated and highly skilled team at Walt Disney World Resort, according to Dr. Mark Penning, Vice President, Animals, Science and Environment, Disney Parks. The series is narrated by Josh Gad. You can read more about it on Disney Parks Blog.

…But for the COVID-19 pandemic, we would already be into the Halloween Season at Walt Disney World Resort by now, with select-night Mickey's Not-So-Scary Halloween Parties underway by night and the usual decor predominantly up and down Main Street U.S.A. Alas, that is not to be this year. Disney Parks Blog reports, though, that Disney Parks Halloween merchandise is now available with some items at shopDisney.com, and some available at World of Disney Stores at Disneyland and Walt Disney World. As Adrienne Vincent-Phoenix discussed on last week's "Fun at Home" Show #19, this year's merchandise selection even includes wheelchair coverings.

The next MousePlanet LIVE! "Fun at Home" Show #20 begins tomorrow, Wednesday, August 19, at 8:30 p.m. Eastern/5:30 p.m. Pacific. Our show will be a bit different this week: We have a special pre-recorded, behind-the-scenes segment with Production Designer John Iacovelli who worked as the Art Director on Disney's 1989 hit film, Honey, I Shrunk the Kids (interview courtesy of The Creative Quarantine Sessions). And, since we all had so much fun with our brand new "MousePlanet LIVE! Jibe Time" game show last week, we have asked back John Saccheri from BigFatPanda.com to defend his narrow win last week against this week's challenger, Shelley Caran from On the Go in MCO.

You're invited to have fun at home by playing along with our fill-in-the-blanks game in the comments (and, we hope, we will play this week in a way that takes into account any lag between the live stream and the comments). Our group of MousePlanet Contributors will be on hand to play the game, talk about all things Disney, and, as always, we'll cover Disney Parks news that breaks between our regular publication schedule and showtime.

"Fun at Home" Show #20 begins streaming LIVE at 8:30 p.m. Eastern/5:30 Pacific. A brief pre-show countdown will begin a few minutes before showtime. You may need to reload this page to see the video if you are here before showtime. You can also view this show by following @MousePlanet on Facebook or Twitter/Periscope.

A replay will be available here after the show.

With Disney now accepting Resort Hotel reservations for 2020 and 2021, our travel partner Get Away Today is available to help you book rooms and packages. Disney has resumed new park ticket sales, but, at present and for the foreseeable future, requires guests to use the Disney Parks Pass System to reserve dates for guest park visits in addition to having a valid admission.

As always, we remind our readers that Walt Disney World Resort theme park tickets are rarely offered at deep discounts unless you are a resident of Florida or eligible for U.S. Military Personnel benefits. Historically, non-Florida residents tend to benefit the most by purchasing tickets in advance (and, of course, being mindful of the rules relevant to those tickets). As prices go up, it becomes even more important to pay heed: Don't get scammed! Never buy tickets from an unofficial or secondary outlet, such as through eBay or Craigslist. Never rent or purchase tickets from people approaching you outside Disney property stating they have remaining days or leftover tickets. This practice is against the terms of use for Walt Disney World Theme Park admissions, and may result in denial of entry. There is no way to determine if these tickets are valid until you try to use them to enter the parks. When available, only purchase Disney theme park tickets directly from Disney, an authorized seller, or a travel agency like MousePlanet travel partner Get Away Today.

When you book your Walt Disney World Resort vacation* with Get Away Today for travel through September 26, 2021, you'll get a $100 Booking Bonus! Your booking bonus includes a $50 Disney Gift Card for your trip + a $50 Get Away Today credit for future travel valid for any of our destinations.

Plus, when you book with Get Away Today, you'll receive all of the perks that come standard with your Walt Disney World® Resort package and these bonuses:

You can get a vacation quote from Get Away Today here. 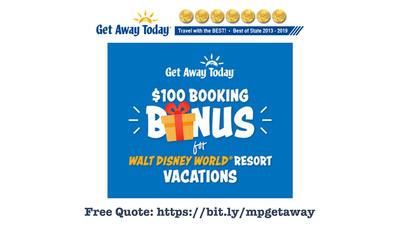 Get a vacation quote from Get Away Today.