As any Disney fan will testify, along with many millions of others, Mickey Mouse is a beloved cultural icon. As a theme park character, as a corporate symbol or as a movie star, there are few images in the world more recognizable than the Mouse. Because of his iconic status and the happy memories Mickey Mouse evokes, people (OK, me) have wanted to take him home with them for decades.

Mickey Mouse merchandise comes in many different forms, including a wide variety of figurines, some made by Disney, itself, and many made by other companies, including some you wouldn't expect. I've always been a big fan of all things Disney, but nothing more than the big cheese, himself. So today, in what one might call Mickey's Basement Part three (please see parts one and two for more craziness), I'll share some examples from my own collection and let you know where you can pick them up for yourself.

Mickey Mouse figurines come in many shapes and sizes. We're going to start right in the Mouse House with something small and work our way up to some that could sit appropriately in your china cabinet.

Disney comes out with new lines of merchandise from time to time, and one of those most fun and accessible in recent years is Vinylmation. These mostly three-inch-tall vinyl figures are by definition Mickey Mouse figurines, as most of them are identical in their Mickey shape. Screened on to these figures could really be anything Disney, the parks, a movie or other character, pretty colors. As I said, pretty much anything.

You could buy one straight up and know exactly what you're getting or buy one as part of a "series." These are kind of like baseball cards in that you buy blind, only knowing that you'll get one of ten or so available in that series. You then keep buying (and buying and buying) until you get the whole set. 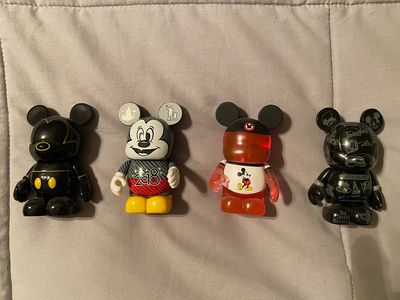 I have a small Vinylmation collection. Photo by Gregg Jacobs.

Disney has moved away from these in recent years, but they're still available, a lot of fun and are scarily collectible. You can get these all over the Disney Parks. Online, Amazon actually has a pretty interesting variety.

Readers of my articles know that one of my favorite things with regard to Disney merchandise is when a manufacturer that you wouldn't expect to collaborate with Disney does and produces great items. Hummel is one of those companies and has had some great collaborations with Disney. 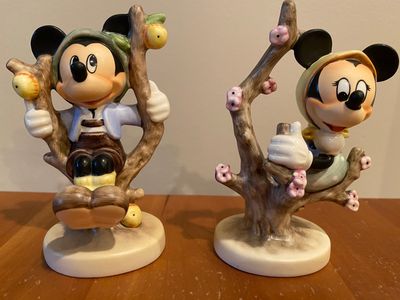 There are hundreds, if not thousands, of different Hummel figurines, many of them classics, something they did that was great was posing Disney characters into some of those classic images. Apple Tree Boy and Apple Tree Girl are two classic Hummel figurines, and for Disney fans, Hummel produced Apple Tree Mickey and Apple Tree Minnie, which were both given to me as gifts some time ago. They are in the exact same pose as the originals. The subjects just happen to have mouse ears (this eBay search result shows Apple Tree Girl and Minnie side by side).

There used to be a Goebel Hummel store right on Disney property in Epcot's Germany pavillion (it's now Karamell-Kuche—oh how I love that caramel popcorn), but you can still buy figurines elsewhere in the pavilion. If you'd like to buy your own Disney-inspired Hummel figurines online, one great place to look is eBay.

Romero Britto is another designer that's jumped on the Mickey bandwagon. According to his official website, Romero Britto is "an international artist that uses vibrant, iconic imagery and fun patterns to reflect his optimistic view of the world around him". He makes a lot of colorful pieces of art that feature hearts and symbols of hope. 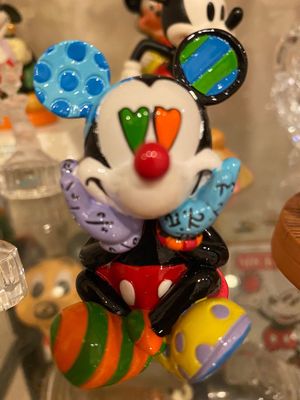 I love the sketchbook look of the figurines. They come in all different sizes and range in price from about $20 to the hundreds. He also has a large Disney collection that's limited to Mickey (a few favorites are the seven dwarfs, Stitch and other members of the fab 5. These are available in the Art of Disney stores, at the Disney Parks and occasionally at the Disney Store. As with most of the goodies today, they're also available online at the Britto website, at Shopdisney.com and City Lights collectibles.

Lenox is known for its fine china and tableware, but they also sell collectibles, and believe it or not, have also gotten into the Disney game. 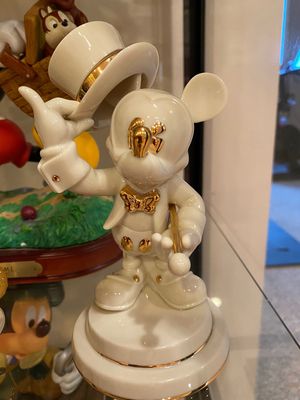 Lenox made an image of Mickey Mouse as the bandleader. Photo by Gregg Jacobs,

Often in traditional Lenox white with gold trim, the company has produced a wide range of Disney items made of Lenox china ranging from figurines to cake toppers to holiday ornaments. They have had many representations of Mickey, over the years, often with Minnie. The figurine that I have from Lenox is approximately six inches high and depicts Mickey as the bandleader, as he appeared in the classic short, The Band Concert. If you'd like to see the full Lenox collection, you can find it here, and if you're into Mickey as the bandleader, here's a bonus Britto figure to check out.

Next, we're going to head a little more upscale with the fine Spanish porcelain maker Lladro, which has also partnered up with Disney to do their own version of the Mouse. 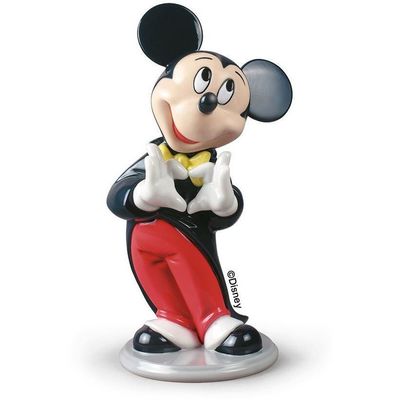 Lladro has made a beautiful tuxedo'd Mickey Mouse figurine. Photo by Gregg Jacobs.

Standing seven inches tall, he appears in Maestro Mickey garb and has his hands forming a heart. It retails for $360, but if you look really hard online, you can Lladro.com.

I'm also a big fan of crystal, and finding crystal Mickeys is happily not too difficult. Disney's partnership with Arribas Brothers goes back to the days of Walt Disney, himself. They have Disney shops across all Parks locations and have all manner of crystal and glass representations of Disney characters.

For today, I'm going to focus on another fine crystal maker, the British company known as Waterford. Waterford Crystal is famous all over the world, and they too have tiptoed into the Disney waters, 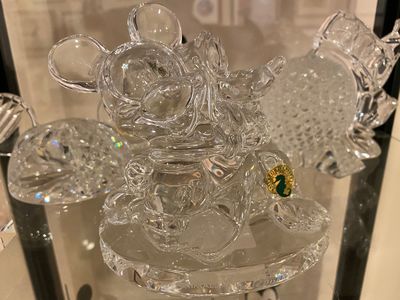 Waterford Crystal celebrating the friendship of Mickey and Pluto. Photo by Gregg Jacobs.

If you want Mickey Mouse in crystal and you look online, you can find many different items, including Christmas ornaments, goblets, paperweights and, of course, a glass slipper. I actually have a few Waterford items, but my favorite is one I got at the Official Disneyana Convention in the late 1990's. It's Mickey Mouse and his best pal Pluto hugging. That was actually the logo image of the convention that year under the tagline 75 Years of Love and Laughter in honor of 75 years of the Walt Disney Company.

I surprisingly haven't seen much Waterford at the Disney Parks recently (Bob Chapek, please add Waterford items to the UK Pavilion at Epcot), but you can find a ton online.

To close out this month, we'll climb back down the price scale and end with a fun one. There was a ton of great merchandise that came out over the last couple of years in honor of Mickey's 90th birthday.

One of my favorites was, you guessed it, a metal figuring depicting Mickey in his 90th glory. 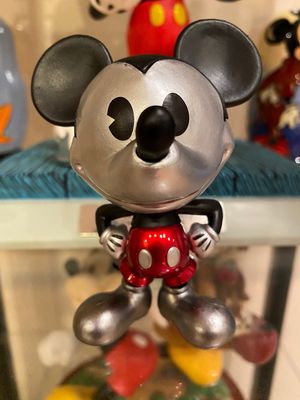 You can get Metalfigs for as little as a few dollars, like this neat set from Walmart.

This is just the beginning folks. There are so many companies producing fine representations of Mickey Mouse. Precious Moments, Walt Disney Classics Collection are all worth checking out.

That does it for this month. Hope you've had some fun looking at these many images of Mickey Mouse, and that it gave you a smile during these difficult times. Please stay healthy and safe. See you next time.