Welcome back to the third article in a four-part series celebrating the original lands of Disney California Adventure Park. Almost 20 years ago, Disneyland's sister park opened up across the esplanade celebrating the wonders of the Golden State. So far, we've covered Entry and Sunshine Plazas, and Hollywood Pictures Backlot. We sadly said good-bye to our favorite giant CALIFORNIA letters but didn't blink an eye when SuperStar Limo drove off into some distant parking lot. But, I still miss the dazzling sights and sounds of The Power of Blast!, the second ensemble that performed in Hyperion Theater before a big, blue genie took over.

Part three is all about the Golden State, literally. The third "land" built inside Disney California Adventure was comprised of six different areas, each celebrating the natural wonders and resources of California. From mountains to the agricultural riches to the beauty of the Bay area, Golden State encompassed them all.

Being Disney, a backstory is a must so Imagineers came up with a legend for the seemingly deserted airstrip. The area was abandoned until a retired experimental pilot returned and set up Condor Flats Scenic Air Tours. A Cessna was stationed at the end of the airstrip, available for tours when needed. Anchored in front of the hangar (Soarin' Over California's location), was a jet end of a rocket simulating takeoffs with steam and lights.

Soarin' Over California invited passengers to view the wonders of California through a hang-gliding simulation. Disney Imagineers and designers created a tri-level vehicle in which you would sit, then rise, 40 feet in the air for the show duration. A massive concave screen projected iconic images of California's splendor—the Golden Gate Bridge, Redwood Creek, Napa Valley, Point Loma, Lake Tahoe, Palm Springs, Yosemite, Camarillo, Anza Borrego, Malibu, Los Angeles, and finally, Disneyland Park. A bit of wind and some scents added in during select scenes and it felt as if you really were "Soarin' Over California." And let's not forget about the pre-flight show hosted by Chief Flight Attendant Patrick (actor Patrick Warburton). Patrick happily reminded us about the safety rules and how to store valuables on this exhilarating new flight. "Nice work, pal." 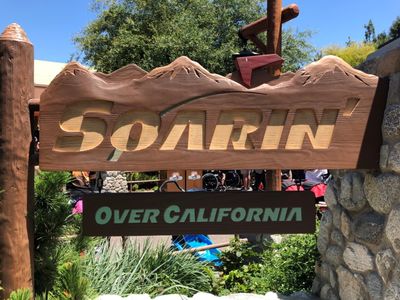 The original Soarin' Over California" semi-retired in 2016 to make way for Soarin' Around the World. Luckily for us enthusiasts, the Golden State version makes appearances at special events. Here's hoping we can smell those orange blossoms again during the park's upcoming 20-year anniversary. Photo by Lisa Stiglic.

Condor Flats was home to only one store—Fly 'N Buy Souvenirs. Patterned after an airfield garage complete with gas pumps, this location sold aviator hats/goggles, aviator jackets, T-shirts, and the ever-popular Soarin' Over California propeller hats.

Continuing with the zany puns, Imagineers named the only restaurant in the "land" Taste Pilot's Grill. You could fill up on burgers, salads, sides, and shakes. Taste PIlot's also boasted the endless produce/condiment bar which guests quickly utilized stacking as much lettuce, tomatoes, onions, and pickles onto their sandwiches. This location was one of my favorites, partly because it was close to Greetings From California store where I was stationed, and because of the looped aviation-themed songs that played. The decor lent itself to photos and sketches of famed aviation events and VIPs, but when David Bowie's (RIP) Space Oddity came on, I stopped to listen. Other rotating songs included Rocket Man, Come Fly With Me, and Major Tom.

Grizzly River Run was one of the park's earliest E-ticket attractions (Soarin' and Screamin' Over California completed the trifecta). It was built to resemble a gold mining expedition, a nod to California's gold rush history. You would board a six-person circular raft and rotate away, spinning and bumping through a turbulent river. This thrilling ride concluded with a 22-foot tall drop called "Grizzzly Go-Round". You were guaranteed to get wet no matter where you sat. GRR Bear stands as the sentinel of Grizzly River Run. He has quickly become a fan favorite over the decades and even dresses up for Halloween and the holidays. Here he is wearing his favorite ugly Christmas sweater. Photo by Lisa Stiglic.

I fell in love with Redwood Creek Challenge Trail when I saw it firsthand before DCA opened to the public. So. Much. Fun. Here, guests of all ages could explore, climb, soar, slide and discover the riches of California's stately redwood forests. The three look-out towers housed rock collections, a two-way radio, and gateways to log slides, cargo net ropes, and swinging bridges, not to mention a tire pulley and rock wall. Hibernation Hollow was the original name of the cave (renamed Spirit Cave in 2003) near Boulder Bears rock formation and the Rock Slide. Ahwahnee Circle Camp sat in the deep forest of Redwood Creek Challenge Trail. This interactive amphitheater showcased exciting and informative Native American stories. Several carved animal totems lend their spirits to the tales. 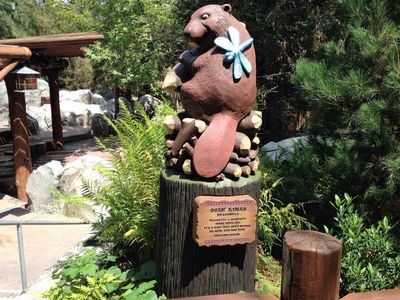 Beaver and Dragonfly are two of the wood-carved animal characters that surrounded Ahwahnee Circle Camp. Photo by Lisa Stiglic.

Rushin' Rivers Outfitters catered to the outdoorsman in all guests. It was designed as a cabin and decorated with outdoor gear such as skis, kayaks, and snowshoes. Even the merchandise was displayed in canoes and kayaks. Love those Disney details. Rushin' Rivers sold apparel, plush, souvenirs, and the must-needed rain ponchos for those trips on Grizzly River Run.

The Bay Area displayed icons from San Francisco including the Painted Ladies houses and the Palace of Fine Arts. Most of the buildings were just facades awaiting future renovations but the Palace of Fine Arts housed the only attraction in the area—Golden Dreams. Whoopi Goldberg played double-duty in DCA in both SuperStar Limo and Golden Dreams. Here, she channeled the spirit of California as hostess Califia who takes viewers on a golden journey of California's history. The 22-minute show concluded with a montage of noteworthy VIPs and their personal dreams—Steve Jobs, the L.A. Lakers, and Walt Disney.

Extending from the Bay Area was Pacific Wharf, home of some of the state's most popular foods. The area was based on Monterey's Cannery Row and San Francisco's Fisherman's Wharf.

Mission Foods hosted a segmented tour displaying the history and traditions of one of Mexico's staples—the tortilla. The Mission Tortilla Factory's interactive guide invited you into watch 3-D videos on traditional tortilla making, then ushered you into a factory section where you could watch the balls of dough being pressed into the tortillas. The final room consisted of chefs presenting innovative recipes using the tortillas. Bonus: Not only could you take home recipe cards, but you received a hot, fresh tortilla to munch on as you exited. Double bonus: If it was your birthday, you received a bag of hot, fresh tortillas.

Boudin Bakery Tour might not seem like an attraction, but it was billed as one. Adjacent to Pacific Wharf Cafe, this self-guided tour was more or less a few placards about the development of sour dough bread, visually hosted by Rosie O'Donnell and Colin Mochrie of Who's Line is it Anyway? fame. Guests also received a slice of fresh bread.

On to Pacific Wharf Cafe. The featured ingredient here was…Boudin sourdough bread! The menu consisted of bread bowls filled with delicious soups and salads, or sandwiches made with the tangy bread. Early on, the Cafe sold some incredible cream puffs the size of softballs which I probably bought weekly. But alas, they disappeared too soon from the original menu. 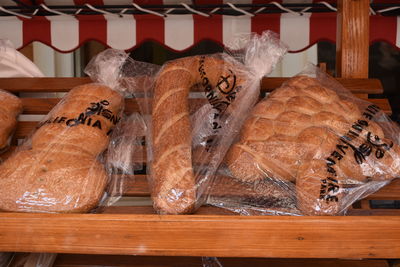 On holidays, special shaped loaves were (and still are) available including jack-o-lanterns, candy canes and turkeys (Thanksgiving Day only). Photo by Lisa Stiglic.

Cocina Cucamonga Mexican Grill is still a staple at Pacific Wharf but it originally stood where Lucky Fortune Cookery now sits. You could order a variety of Mexican-inspired fare including tacos, burritos, and enchiladas.

Lucky Fortune Cookery originally sold sushi along with rice and Chow Mein. The menu has altered a bit over the years but it still serves the Asian-inspired foods.

One of the biggest draws of Disney California Adventure has been the sale of alcohol, and Rita's Baja Blender's was one of the first locations to imbibe in the libations. Guests lined up for their favorite frozen margaritas—lemon-lime, strawberry or the Grand Margarita which was punched with a shot of tequila. Bam!

Acclaimed vintner Robert Mondavi was one of the first to partner with Disney in the new park. His Season of the Vine short documentary invited guests to learn wine-making and then sample and purchase said wines. (Robert Mondavi pulled from DCA by the end of 2001, taking a multi-million dollar loss. Season of the Vine transitioned into Blue Sky Cellar, which became a preview center of things to come including Bug's Land, Cars Land and Buena Vista Street.)

Wine Country Market partnered with Seasons of the Vine as a high-end delicatessen. The shop sold gourmet cheeses and meats, specialty sides and Mondavi's wines to take home. (Along with the loss of Mondavi, Wine Country Market closed in 2001 and in 2002, Wine Country Trattoria opened up as an Italian-themed sit-down dining area.)

Above Wine Country was The Vineyard Room, a prix-fixe dinner location which paired the wines with three-course lunches or dinners. The menu rotated seasonally.

Concluding the last of the six components of the Golden State area was Bountiful Valley Farm, a nod to the agricultural workings of California.

The "farm" area of the Bountiful Valley Farm showcased several types of fruit and nut trees, mini orchards, a tractor area, and a water irrigation play area. Caterpillar Tractors sponsored the tractor area which included a pop-up shop designed like an actual tractor. Caterpillar brand souvenirs were a hot product. The location also housed sundries such as aspirin, bandaids, sun block and film. (Google it.) 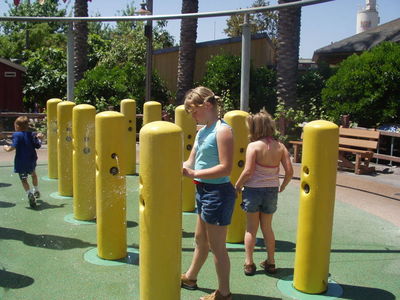 The "farm" area of the Bountiful Valley Farm showcased several types of fruit and nut trees, mini orchards, a tractor area, and a water irrigation play area. Caterpillar Tractors sponsored the tractor area which included a pop-up shop designed like an actual tractor. Caterpillar brand souvenirs were a hot product. The location also housed sundries such as aspirin, bandaids, sun block and film. (Google it.)

"Delicious to a Fault" was the tagline for Sam Andreas Shakes. (Get it?) This pop-up shop featured thick, decadent frosty treats with mix-ins such as cookies, candies, and dates. Yes, dates. Along with the cream puffs, I miss the shakes the most.

What would California be without a Farmer's Market? Bountiful Valley Farmer's Market was the signature lunch spot for the area. The menu featured wraps, sandwiches, and salads.

Santa Rosa Seed 'N' Supply was the larger of the two shops in Bountiful Valley Farm area. It catered to gardening and a few themed souvenirs such as T-shirts and hats.

Almost two decades later and Golden State barely resembles its original form. Condor Flats and Grizzly Park Recreation areas have merged into one "land—Grizzly Peak. A mermaid moved into Golden Dreams and became part of Paradise Gardens' world. Pacific Wharf absorbed Golden Vine Winery, and now Cars Land sits where part of Bountiful Valley Farm once stood. A Bug's Land joined It's Tough to be a Bug in 2002, but buzzed away in 2018 to make way for Avengers' Campus. Of all the original lands, Golden State has a been impacted the most over the almost 20 years.

There's so much more to Disney California Adventure Park and the changes it's endured. If you'd like to learn more, my book California Dreamin': Disney California Adventure-An Insider's Guide, is currently available on Amazon.com. It's filled with plenty of trivia and fun history about Anaheim's second theme park. Stay tuned next month, for an in-depth look at the last original "land" from DCA's bygone days—Paradise Pier.