Large theme parks like Disneyland and Disney California Adventure will not be permitted to reopen until their county enters the least-restrictive tier of California's Blueprint for a Safer Economy, according to new guidelines issued Tuesday by the California Department of Health. The rules may force Disneyland and other theme parks to remain closed until next summer.

California Department of Health Secretary Dr. Mark Ghaly delivered the long-awaited guidelines during a presentation on Tuesday. Under the guidelines, small theme parks may reopen to same-county residents when their county enters Tier 3 (moderate/orange). Operations would be capped at 25% capacity or 500 guests (whichever is more restrictive).

All theme parks may reopen with a 25% attendance cap in Tier 4 (minimal/yellow). There is no residency restriction, but the reopening guidelines include mandatory face coverings, guest reservation systems, and guest health screenings. Full guidance is posted in this PDF.

"We have proven that we can responsibly reopen, with science-based health and safety protocols strictly enforced at our theme park properties around the world. Nevertheless, the State of California continues to ignore this fact, instead mandating arbitrary guidelines that it knows are unworkable and that hold us to a standard vastly different from other reopened businesses and state-operated facilities. Together with our labor unions we want to get people back to work, but these State guidelines will keep us shuttered for the foreseeable future, forcing thousands more people out of work, leading to the inevitable closure of small family-owned businesses, and irreparably devastating the Anaheim/Southern California community."

As of this posting, Orange County, California, where Disneyland Resort is located, is in Tier 2 (substantial/red). Counties must remain in the Red or Orange tiers for a minimum of 21 days before being eligible to move down into the next tier, provided they meet the criteria for that less-restrictive tier for two consecutive weeks. It had looked like Orange County could move to the orange tier by Halloween if the county’s metrics improved enough, but the county has failed to meet the target for daily new cases for several weeks.

Earlier Tuesday, Dr. Clayton Chau, Director, Orange County Health Care Agency told the Orange Coubty Board of Supervisors, “Personally, I think that we can look forward to a yellow tier by next summer, hopefully. Hopefully.”

Chau said, "I think for a large county like us, especially a county with institution of higher education where folks [are] coming in from outside the county and outside the state, I think it’s going to be very hard to achieve the yellow tier.” 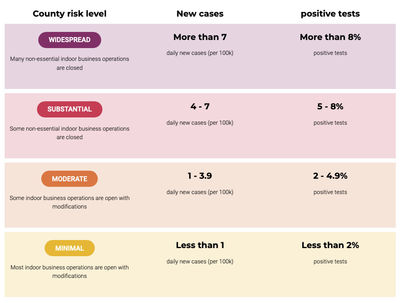 California uses a color-coded, four-tier system to indicate what business operations and social activites are permitted within each county. Orange County is currently in the red tier.

Secretary Dr. Mark Ghaly said that the State's teams learned a great deal from their visits to operating parks across the country, but one of his concerns is that while guests may have strict rules to follow at parks, they may let their guard down after departing parks and risk spreading COVID-19 at hotels, restaurants, and elsewhere. California is also concerned that the larger parks, by their nature, bring in guests from larger geographic areas (often for multiple days), and create instances of random contacts between people and high-touch surfaces.

The California Attractions and Parks Association said, "The guidance issued by the Newsom Administration will keep theme parks shuttered for the foreseeable future."

Join us as we discuss this development on our next MousePlanet LIVE "Fun at Home" Show #29, tomorrow night.

Show #29 begins LIVE streaming with a pre-show just before 8:30 p.m. Eastern/5:30 p.m. Pacific. If you load this page before showtime, you may need to reload to see the stream. A replay will be available here after the show concludes.