A day after California issued guidelines that could prevent the Disneyland Resort from reopening until 2021, the Resort moved its earliest hotel reservation date back by two weeks.

A notice on the Disney website states that the Disneyland Hotel is still undergoing refurbishment, although reservations are available. 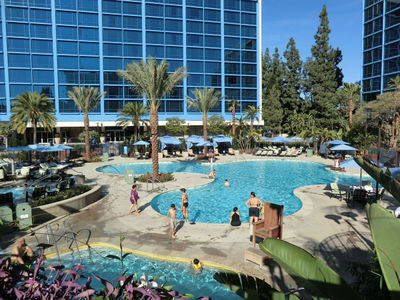 The state guidelines for lodging do not prevent Disney from reopening one or more of the resort hotels, and some Southern California resorts including Knott's Berry Farm and Legoland have already reopened their hotels. Disney's hotels would be subject to operational restrictions, but most of the restaurants and gift shops could reopen, as could the pool areas with capacity limits.

However, the just-released state guidelines, which Disneyland Resort president Ken Potrock calls "arbitrary" and "unworkable," mean that Disneyland and Disney California Adventure will not be permitted to reopen until Orange County, California enters the least-restrictive yellow tier of California's Blueprint for a Safer Economy. Even then, the park can operate at no more than 25% of capacity.

In the latest weekly update by the state, Orange County is in Tier 2 (substantial/red). Counties must remain in the red or orange tiers for a minimum of 21 days before being eligible to move down into the next tier, provided they meet the criteria for that less-restrictive tier for two consecutive weeks. It had looked like Orange County could move to the orange tier by Halloween if the county’s metrics improved enough, but the county has failed to meet the target for daily new cases for several weeks.

Dr. Clayton Chau, Director, Orange County Health Care Agency told the Orange County Board of Supervisors on Tuesday, “Personally, I think that we can look forward to a yellow tier by next summer, hopefully. Hopefully.”

A host of theme park operators, government officials and trade organizations have railed against the California guidelines. The California Attractions and Parks Association said the rules "will keep theme parks shuttered for the foreseeable future," and Anaheim mayor Harry Sidhu said the guidelines "fail working families and small business."