Last week, I talked about the history of celebrating Halloween at Disneyland. It is funny the tricks memory can play on us because I think most Disney guests just always assumed that there has been some type of Halloween celebration at the Disney parks.

After all, even the foreign Disney parks have Halloween celebrations and some great merchandise not available here in the United States even though Halloween as we know and celebrate it is a distinctly American holiday.

At Tokyo Disneyland the first Halloween celebration was in 1997 and called "Disney Happy Halloween" focusing primarily on children including special treats for kids under 12. The following year saw the addition of the "Happy Halloween Twilight Parade". Over the decades it has become more and more elaborate for all ages with the park being decorated, specialty foods, and a variety of merchandise.

However, the real birth of a Disney parks Halloween started at Walt Disney World.

Mickey's Not So Scary Halloween Party did not exist when the Magic Kingdom opened but two highly popular events inspired its creation.

At Walt Disney World, the very first Mickey's Very Merry Christmas Party was held on December 16, 1983 for one night only but then expanded to two nights in 1989, then three nights in 1990 and its popularity continued to increase so that today, it runs for multiple weeks. This separate hard-ticketed event offered to a limited number of guests after the Magic Kingdom closed for the night was a great guest satisfier with new things added to it each year.

The second inspiration was an event at a competing theme park.

Halloween Horror Nights began at Universal Studios Florida in 1991 for three nights and was instantly popular so that today, it also runs for multiple weeks. Designed as the ultimate in an interactive scary experience, it sparked the creation of similar events at amusement venues not only in Central Florida but also in Southern California. 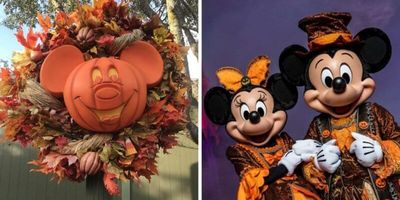 The Walt Disney Company decided that perhaps a family friendly alternative celebration to the Universal event along the same lines as Mickey's Very Merry Christmas Party might appeal especially to families with young children. Those holiday offerings were generating tens of thousands of additional sales from theme park guests and local residents so another similar party seemed a great idea.

It was a great idea and has become an annual tradition (until this year) that has proven to be both a great "guest satisfier" and a huge way to generate additional revenue. While the Walt Disney World celebration lacks some of Disneyland's special touches like the Haunted Mansion Holiday, Ray Bradbury's Halloween Tree and more, it has its own charms.

Walt Disney World opened in October 1971, and there was so much going on that there was not time to host a Halloween event although arrangements were made for a big Christmas holiday celebration that year.

The first WDW Halloween event was held October 28-29, 1972. The newspaper advertised it as "Halloween Weekend." Among the highlights was free admission to the Haunted Mansion which was a pretty big deal since at that time all attractions required individual tickets and the Haunted Mansion was an "E" Ticket, the highest priced one.

In addition there were character appearances (but not in Halloween costumes), magic shows and a screening of Disney cartoons like The Legend of Sleepy Hollow. It was not a separate ticketed event. Guests just purchased a regular admission on those two days. It was so popular that the weekend event was repeated the next year in 1973, on October 27 and 28.

A special ticketed event called "Saturday Night at the World Party" debuted in 1976.

According to a press release, "The special series offers visitors extended operating hours until midnight each Saturday during the fall and winter season when normal operating hours are 9 a.m. until 7 p.m. Each evening will have a special theme, adding to the excitement of a visit to the Magic Kingdom."

Disney advertised: "It's a Halloween Party in the Magic Kingdom from 9 p.m. until 1:30 a.m., complete with a magic show and Halloween 'special effects' Top entertainment by Dr. Hook, The Police, Michael Johnson, and Sealevel will make the evening a total success!"

In 1975, to help attract locals and guests to the new Lake Buena Vista Shopping Village, the Village Halloween Party was introduced where children (encouraged to attend in costume) could go with their parents trick-or-treating at the various stores and restaurants.

It wasn't until October 31, 1995, that the first Mickey's Not So Scary Halloween Party debuted. Like the first year of MVMCP, it was held for only one night to determine if there was any interest. The cost was $16.95.

By October 1997, it increased to two nights and, in 1999, increased again to three nights. Two years later, in 2001, it grew to five nights; two years after that in 2003 to 10 nights. By 2005, it was boosted to 15 nights and, in 2016 there were twenty-nine nights. Just like MVMCP, new offerings were introduced each year. The event now takes place on selected nights in late August, September, October and sometimes as late as November first.

Depending upon which night an adult attends, today, it can cost a hefty fee up to a premium price per person for Halloween night.

There are many reasons for the popularity of the event. First, it provides a safer and more magical environment for young children to go trick-or-treating for quality candy than visiting their local neighborhoods. Second, the limited number of people in the park provides easier access to favorite attractions.

Finally, during the event, the Magic Kingdom provides some unique experiences that don't exist normally from a special "Mickey's Boo To You" parade to eerie projections on the castle and unique stage shows in addition to Disney character dance parties.

Since 2005, the event included an exclusive fireworks show titled Happy HalloWishes: A Grim Grinning Ghosts' Spooktacular in the Sky with Halloween-themed music. This fireworks show was replaced with a new one in 2019 designed to run several years.

The new fireworks show, hosted by Jack Skellington and his dog Zero, titled Disney's Not So Spooky Spectacular features Mickey, Minnie, Donald and Goofy on a trick-or-treating adventure, as they are drawn to a mysterious haunted house. The show also included dancing skeletons and ghosts, lasers, new lighting, projections on Cinderella Castle, along with some troublemaking Disney villains.

In addition, several limited-edition items of merchandise from pins to ornaments to balloons to apparel are sold only during the event. A special limited edition Sorcerers of the Magic Kingdom card is handed out at the event.

Of course, one of the key components is the opportunity to get free candy at a variety of locations on a special trick-or-treat trail. In 2016, roughly 285 tons of candy was handed out during all the parties including 40 different kinds of brand-name candies like Snickers, Milky Way, Butterfingers, M&Ms and Kit Kats as well as other offerings including Cheez-Its, Goldfish Crackers, and apple slices. Allergen free candy and other treats are also available so that children with allergies could still participate.

There are special character meet-and-greet opportunities and photo opportunities not available during the regular operating hours. The Disney characters like Mickey, Minnie, Donald, Daisy and Winnie the Pooh and his friends are in their Halloween costumes, something that can only be seen at the event.

The PhotoPass photographers have 30 different images that can be digitally added to a guest photo, like holding a poison apple over a cauldron, holding a frightful flaming pumpkin, hitching a ride with the ghosts near the Haunted Mansion or meeting the Headless Horseman in person at the entrance to Magic Kingdom.

Special food offerings are available from a spider cupcake to candy corn flavored popcorn. Some of these special treats include at the Main Street Bakery the Not-So-Poison Apple Cupcake (spiced apple cupcake with pecan crunch and buttercream), the Halloween Cinnamon Roll (cinnamon roll topped with icing and a chocolate spider web), and the Pumpkin Cheesecake topped with a chocolate Mickey Pumpkin.

With the increased popularity of the event, Disney had to set some guidelines not only for safety concerns but because of the situation where some adults were attired so accurately that other guests mistook them for official Disney character performers. At one time the Disney Store sold adult costumes that were very authentic, but no longer does so.

For legal and entertainment reasons, Disney does not want non-Disney employees pretending to be Disney characters, taking pictures with guests and giving autographs.

For guests ages 13 and under:

In recent years, the party has officially started at 7 p.m. inside Magic Kingdom. Disney Halloween party guests with special wristbands are allowed to enter the park starting as early as 4 p.m. with the following special events scheduled during the evening:

A crew of live pirate performers appears throughout Pirates of the Caribbean searching for Gunpowder Pete. A pirate prisoner hassles guests to help him escape and some pirates sprinkled throughout the attraction try to recruit guests for their crew.

Mad Tea Party gets special lighting, fog and music, while Space Mountain goes completely dark. Over at the Laugh Floor in the Monster World, the comedic monsters learn more about the Human World holiday called Halloween with seasonal jokes.

The dance parties include Monstrous Scream-O-Ween Ball with Mike Wazowski and Sulley from Monsters Inc. in Tomorrowland. At Cosmic Ray's Starlight Café, the Villain Kids from the Descendants franchise appear in dance videos for the Disney DescenDANCE Party.

A Dapper Dans-style ghostly group called Cadaver Dans pops up throughout the night for performances in front of The Frontier Trading Post in Frontierland. They crack jokes and sing songs like "Happy Trails To You" and "Boo to You."

Cruella's Halloween Hide-a-Way is a special dining experience at Tony's Town Square Restaurant starting around 9:30pm that allows guests to mingle with the villainess and enjoy hors d'oeuvres and sweets along with access to a reserved viewing section for the 11:15 parade. This is a separately ticketed experience above the regular admission to the event.

Because of the pandemic restrictions, the entire event was cancelled for October 2020, the first time in a quarter of a century.

The spooky Headless Horseman rides from Frontierland to Main Street U.S.A. in advance of each performance of Mickey's "Boo To You" Halloween Parade.

Unfortunately, on October 8, 2014, it had been raining earlier in the day and the horse fell while going through Liberty Square. The rider fell off but got to his feet quickly. The horse continued on without the rider who caught up to it and remounted. They did not appear in the second parade because they both underwent medical evaluations to determine that both were fine. They were and appeared in the parade the next evening. Khan, named after Mulan's horse in the animated feature Mulan (1998), is half Percheron and half thoroughbred, and is the black horse primarily used as the Headless Horseman's horse at Halloween. He is not used to pull a carriage because, believe it or not, he thinks he is being chased. Another horse, Ike, who was used by the Headless Horseman was adopted out to a family in Texas who now take care of him.

These horses also appeared at Halloween events at Fort Wilderness Resort and Campground.

Starting in 2017, the Fort Wilderness Resort and Campground offered "Return to Sleepy Hollow" special event including a group viewing of the 1949 Disney animated film inside the resort's Tri-Circle-D Ranch stables. During event nights, guests got to see galloping ghosts and experience an up-close and personal encounter with the Headless Horseman. For several years during the Halloween season, Fort Wilderness offered a roughly 15-minute Haunted Hayride that was a spooky trip through the swamps down along Bay Lake with the climax being a close encounter with the Headless Horseman. Then it became Haunted Carriage Rides in 2008 and then was completely discontinued after 2012.

Halloween is just three days away, so why do I just have several empty bags of Halloween candy? That's one of the scariest things about Halloween. Maybe the Headless Horseman took it.

Stay safe and sane and have the happiest of Disney Halloweens!