The California Attractions and Parks Association on Tuesday released a statement in response to comments made by California Governor Gavin Newsom's during a press conference earlier that day.

“We continue to ask the administration to share any data or science related to theme parks that they are using to inform their decision to keep the major theme parks closed indefinitely while allowing similar venues to reopen.

Parks have been opened throughout the country and world for months and we have seen no data indicating that COVID outbreaks are being traced back to theme parks. If they can reopen safely in other states and countries, then why not in California?”

The comments come after Newsom defended the state's reopening guidelines for theme parks during a question-and-answer session following his weekly Tuesday press conference. A reporter asked Newsom, if Disney parks have opened around the world and they’re doing ok, why can’t we do this here?

Newsom's lengthy response touched on a number of points, including double-digit increases in the transmission rates of COVID-19 throughout much of the country, increased case rates around the world, and an increase in hospital and ICU admissions in California.

For these reasons, Newsom said, "We should be concerned about opening up a large theme park where by definition people mix from every conceivable walk of live and pit themselves and others at increased risk of seeing transmission rates rise related to COVID-19." 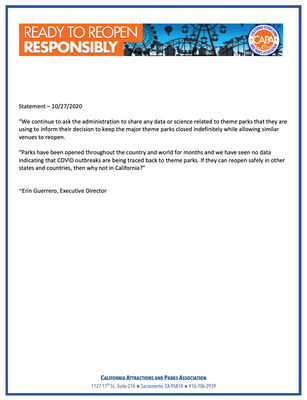 The California Attractions and Parks Association is not pleased with recent comments made by California Governor Gavin Newsom.

Noting that the state has everything from small boardwalk theme parks to "theme parks that are really cities that operate convention facilities and hotels, restaurants and organize not just around carrousels and other amenities," Newsom said the state has to design guidelines that address the unique dynamics and localities of each park.

The governor said he is hearing concerns expressed by "experts worldwide" about "what we have in store for us over the next 6-12 weeks." He ended by saying,

"And so respectfully, deep respect, because I understand, as someone with four young kids the reverential identity they have with one particular brand that you are identifying and their desire to be entertained and the desire of those that rightfully want to get their jobs back to get back some sense of normalcy. Forgive me, but we as a state are going to be driven by data and science, we are going to be driven by public health first."

The Disneyland Resort on Tuesday also issued a letter to the community, saying in part,

"Theme park reopening guidelines were recently released by the State of California, putting parks like Disneyland Resort into the most restrictive tier. Despite proving the ability to operate with responsible health and safety protocols in place for cast members and guests, the guidelines from the governor’s office mean that Disneyland park and Disney California Adventure park will not be reopening anytime soon.

After what has already been an incredibly difficult month, this news has brought more sadness and disappointment to the Disneyland Resort community, including cast members, guests and other local business owners who rely on the resort to drive business and tourism."

Disney last week announced it would take a page from other local theme parks to open a portion of Disney California Adventure for shopping and dining only.

Starting in November (the exact date has not been released), Disney fans will be able to dine and shop at select Buena Vista Street locations. The lineup announced by the Disney Parks Blog includes retail stores, quick-service foods and even a table-service restaurant.