Strap yourself in—Star Wars is jumping into hyperactive hyperdrive with new Disney+ series and theatrical movies releases. Most of these were announced during Disney Investor Day 2020 on December 10, so let's just do a quick rundown.

We now know the title of one of two movies set to come out in the Star Wars galaxy. Rogue Squadron will come out in three years under the direction of Patty Jenkins, who also made Wonder Woman (2017) and this month's Wonder Woman 1984. 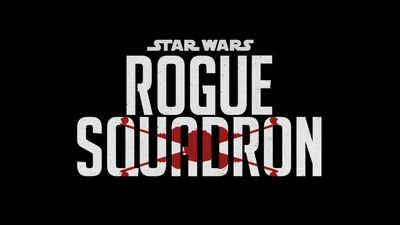 In the following video she tweeted, Jenkins walks over to board an X-Wing fighter after explaining that her focus is on that of pilots. We don't know much else about the film, except that judging by the look of the X-Wing, this is most likely set in the time of the Rebellion of the Original Trilogy as well as Rogue One. I'd like to see Biggs from A New Hope and Blue Leader from Rogue One, please.

Onto the next reveal…

As you see in the following sizzle reel, Diego Luna is not only reprising his role as rebel Cassian Andor, but he's also its executive producer!

The story is taking place some time after Revenge of the Sith as the Rebellion gets going. Scheduled to premiere on Disney+ in 2022 with 12 episodes. We're not sure if there will be more or if it will only be 12 and remain a limited series. Either way, I'm excited to see Luna's work, as well as (hopefully) Alan Tudyk returning as K-2SO, and having a great buddy adventure or two.

In this spin-off of The Clone Wars, we find a team of clones that may not have followed Revenge of the Sith's "Order 66" and have instead turned to being mercenaries in the galaxy, perhaps for the forces of good. Note the cameos of Fennec Shand (whom we've met in The Mandalorian) and Grand Moff Tarkin (from A New Hope and Rogue One). 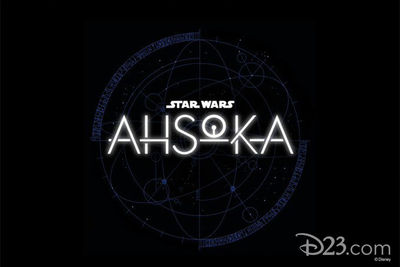 Rosario Dawson reprises her role as Ahsoka Tano as we follow her further adventures hinted at in her appearance in Chapter 14 of The Mandalorian. Since this takes place during the time of The Mandalorian, it will be interesting to see how her story unfolds after the fall of the Empire and the death of her former master, Anakin—and may tie in to events from Rebels. Lots of possibilities here.

Rangers of the New Republic 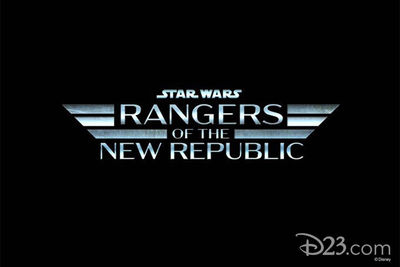 Rangers of the New Republic title image. This is also a Mandalorian spin-off series. © Lucasfilm.

I know only one thing about this series: it takes place during the time of The Mandalorian. What is it about? I guess it's about those who try to instill peace throughout the galaxy after the fall of the Empire. We may have seen a couple of X-Wing pilots in Mandalorian doing that very thing, so perhaps that's their start. 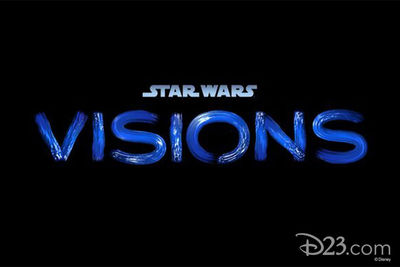 Star Wars Visions will be an Original Series of animated short films. © Lucasfilm.

Visions will be a series of shorts that "celebrate the Star Wars galaxy through the lens of the world's best Japanese anime creators." And that, my friends, may be all the info you need. Fans have been clamoring for the junction of anime and Star Wars, and if "Galaxies of Adventure" on YouTube is any indication, Visions is going to be so darn cool. Coming in 2021.

Here's what we knew about Obi-Wan Kenobi, the series. It will star Ewan McGregor! That's news enough.

Now they've announced that he will be joined by Hayden Christensen returning as Darth Vader. I think it's great that they get to work together again and bring us some real bridging between the Prequels and the Originals. I always thought that these two characters had another face-off between Episode III and IV when Luke tried to turn Vader to the light side of the Force and Vader said, "Obi-Wan once thought as you do." And now we'll see it! We may also see Vader in his role as the scourge of the Jedi which we saw a hint of in the closing moments of Rogue One. This series is set 10 years after Revenge of the Sith, and will be a limited series. 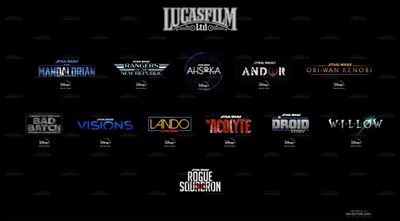 An image of upcoming titles in the Star Wars galaxy. © Lucasfilm/Disney.

"Leslye Headland brings a new Star Wars series to Disney+ with The Acolyte… a mystery-thriller that will take viewers into a galaxy of shadowy secrets and emerging dark-side powers in the final days of the High Republic era."

The "High Republic" materials will begin as novels beginning next month.

"The galaxy's favorite scoundrel, Lando Calrissian, will return in Lando, a brand-new event series for Disney+."

Will we see Donald Glover? Billy Dee Williams? Alden Ehrenreich? Of all the high-stakes going on in all these series, I hope this one is the more light-hearted fun one with the swashbuckling aspect of Star Wars not always seen in these spin-offs.

"Lucasfilm Animation is teaming up with Lucasfilm's visual effects team, Industrial Light & Magic, to develop a special Star Wars adventure film for Disney+, A Droid Story. This epic journey will introduce us to a new hero guided by R2-D2 and C-3PO."

A new hero, you say? I wouldn't mind more BB-8. In fact, I'd like to insist on seeing more D-0! In any case, don't miss that bit about this being a film, not a series. This could be really fun and I imagine it could include homages to many of our favorite droids throughout the galaxy—and this project seems prime for toys and merch!

Finally, something that was already announced before but didn't get any new information about, there will also be a Star Wars feature film by writer/director Taika Waititi. This one, I believe, is supposed to be a theatrical release.

And… well, there's also a Willow series coming to Disney+, and a new Indiana Jones feature film scheduled to come out in July 2022… whew!

This is enough to fill a galaxy… I guess that's the point.