A Salute to Holiday Services

The 2020 holiday season at Walt Disney World looks much, much different than it has in years past. While there will be many holiday-related offerings, some of the guest favorites will not be happening such as Mickey's Very Merry Christmas Party and the Candlelight Processional among other things.

However, the parks and resorts are still decorated, thanks to the hard working cast members of Holiday Services who tried this year to bring some holiday cheer during these uncertain times. 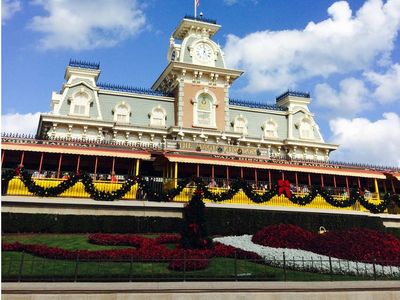 The Main Street Train Station is one of the many places around the resort that is decorated for the holidays.

"One of the most unique things is when we transform from Halloween to Christmas. It appears that we have decorated in just one night but actually it takes us three nights to decorate Magic Kingdom. When we decorate Disney's cruise ships, we have less than six hours," said Lisa Borotkanics, Disney's manager of holiday service who supervises a staff of roughly 40 cast members who work year-round. However, on the nights when Holiday Services decorates, over 160 people are involved with the effort bringing in other departments and seasonal cast members.

Holiday Services plans a year in advance for the magical transformation. In fact, they actually start their planning before the current holiday season has debuted for the next Christmas.

"When you come to our parks, there's one thing you've got to know – everyone is decorating together," Borotkanics said. "From food and beverage to the beautiful pastry displays to merchandise displays and, of course, all the decorations outside."

The Holiday Services warehouse covers approximately 55,000 square feet of space. It is located behind the Magic Kingdom in the same area that houses the buildings for Disney University and Central Shops that builds and maintains things like ride vehicles. Originally it was called Christmas Services but changed its name when it expanded into other holidays like Halloween. Previously the building was the food preparation center and central bakery for the Magic Kingdom. When the shift to local area kitchens occurred, Holiday Services moved in. The holiday decorations used to be stored in several locations scattered all over the property but are now centralized in this location. Everything is pre-assembled and labeled and stored down multiple aisles looking very much like a typical warehouse.

Generally, the decorations are expected to last no more then five seasons. The team is kept busy all year cleaning, refurbishing and redesigning holiday decorations for a different park every year within the workshop that was formerly the bakery.

An entire WDW resort hotel is decorated all at once in a single night. While decorating starts right after Halloween, with all the resorts to take care of it can take until mid-November for the resorts to be fully decorated. At the Polynesian this year the Christmas tree is wrapped from top to bottom with colorful leis, pink hibiscus flowers, pineapples, fish and starfish ornaments. Decorating the various areas primarily takes place on the third shift while guests are sleeping to preserve the "magic" of the holidays at the Walt Disney World Resort. It is meant to suggest that Santa's elves snuck in over night and did the transformation. On the cruise ships, it is done quickly between guests disembarking and new guests boarding.

Here are some "fun facts" about the decorating:

Of course, it wouldn't be Christmas without a magnificent Christmas tree. Approximately 1,000 trees ranging in height from two to fourteen feet decorate areas across Walt Disney World property.

Much larger artificial "Icon" trees can be found at all four parks, Disney Springs and Disney's Contemporary Resort. Stars and toppers for the trees are up to seven feet tall and can weigh more than 200 pounds each. Before the late 1990s, the Walt Disney World theme parks each had a huge live tree trucked in from some other state like Mt. Shasta in California. Basically, the top 65-foot portion of a live tree was cut and used so that the California tree could continue to grow. Once the top of the tree was brought to Walt Disney World, it was treated heavily with flame retardant chemicals and decorated so it made the trees non-recyclable after the holidays.

By 1999, Walt Disney World replaced the main trees with artificial ones. The artificial trees were designed at WDW and constructed by the Parks Decorating Department. They were constructed using a single pole, unusual for trees over thirty feet tall, and divided into three connecting sections.

Of course, Holiday Services are also responsible for all the floral decorations as well. Just at the Magic Kingdom 590 garlands, measuring approximately a total of 5,188 feet, can be found. At one time, the largest wreath at the Walt Disney World Resort was 25 feet in diameter and was located on the front of the Cirque Du Soleil building.

In the 1990s, they decided to use 1,500 dozen red apples to decorate Fort Wilderness, in particular a huge garland hung outside the entrance. The natural looking apples were attached and about two and a half weeks into the Christmas season, all of the apples had lost their red color. When the sun hit them and dried off the night dew, the apples had turned into Golden Delicious yellow since the color had been bled out. All of the apples were removed. Disney bought red automotive finish paint with ultra-violet inhibitors to put on the apples. Disney hand dipped and hung to dry all 1,500 dozen apples and then returned them to the garland.

Probably the most prominent floral decoration are the over 100,000 poinsettias artfully arrayed in attractive baskets, impressive towers and various other arrangements. When the holidays are over, the poinsettias are removed and composted. The poinsettia, or scientifically named Euphorbia pulcherrima, was first introduced into the United States from Mexico around 1825 by the first U.S. Ambassador to Mexico, Joel Roberts Poinsett. In the early 1900s, it became a popular landscape plant in California and since then is the plant most people associate with the holiday season.

On property the 8-foot tall towers which resemble big, red Christmas trees are composed of 170 poinsettias each and have been a traditional favorite at the parks for over two decades. Fourteen of them are displayed property wide with the Magic Kingdom having 11 , Disney's Hollywood Studios two and one at Epcot. It takes a full day to assemble just one tower. The towers are fairly intricate structures with tubing for water built into the support work so that no one has to climb up and refresh the plants each day. Once assembled at the tree farm outside of the Magic Kingdom, they are transported by truck to their assigned location where they are hoisted into place by heavy machinery.

Eric Darden, a horticultural area manager said, "You just want guests to get a show like they're not going to get anywhere else in the world. Every detail that you can add with the plants and towers just helps with that overall effect."

Some of these plants are supplied by local growers in Apopka but the majority comes from Dixie Green in Centre, Alabama.

"We had some friends down in Florida that we knew, and Disney was looking for some certain plants, and our friends couldn't locate them so they called us," Dixie Green President Harlan Richardson said, explaining how the partnership with WDW began over two decades ago. "Our poinsettias are a better product. There, they plant all their products outside, but it's so warm down there that the plants are softer. Ours, we can let them get cooler at night and that hardens them up, makes them last longer. We have a stouter plant."

The more rigid plants from Dixie Green live longer and every shipment that leaves Dixie Green is labeled for a specific area of the park.

"When it's time to ship, we pull the plants according to which specific flower bed or area they go into," he said. "We pull the plants, put them all on a rolling rack and each rack is marked. When they get the load, they know exactly where those plants are to be planted."

Richardson said the process of getting ready to ship between 100,000 and 125,000 poinsettias to the park gets underway in July when planting begins and culminates with semi-trucks filled with potted poinsettias.

"We have a few that go down in December, but the majority of them are already down there," he said. "They use them at all of the parks and also on their cruise ships."

One of my personal favorite holiday overlays is Dinosaur Gertie located in Echo Lake at Disney's Hollywood Studios. For Christmas she wears a gigantic Santa hat that can fit four people inside it and in her mouth dangles a big red ornament. For Christmas, Gertie wears a gigantic Santa hat that can fit four people inside it and in her mouth dangles a big red ornament.

Since I have a fondness for classic Hollywood, I also like that over the past few years, the area got seasonal decorations around Echo Lake designed to be retro, with pale colors and custom designs. For example, the deer statues are inspired by vintage ornaments from the 1950s.

One holiday tradition I will really miss this year is no gingerbread displays at the WDW resort hotels in order to avoid gatherings of large crowds. Holiday Services is responsible for coordinating those impressive decorations. In 2019, the house featured hand-painted art above each window featuring the Fab Five and classic princesses, as well as a miniature Christmas village featuring Santa. It had amazing detail from the hand-carved flowers to the candy canes and snowflakes on the "siding" of the house and it even puffed "smoke" out of its chimney.

The bakers do not add water to the dough so it lasts longer and prevents mold. After the holiday season it s taken to the Disney Tree Farm, where honey bees then eat the remaining sugar off of the house as a winter food source. However, to give guests a little "taste" so to speak this year Disney's Grand Floridian Resort and Spa has mini-gingerbread creations with some chocolate sculptures.

Of course, one of the first gingerbread houses in a WDW resort for over two decades is the one at the Contemporary. Cinderella's (Gingerbread) Castle returned on the fourth floor of Disney's Contemporary Resort in 2019. It is apparent that this display was inspired by the artwork style of Mary Blair noted for her work on the It's a Small World attraction but also responsible for the artwork on the exterior of the resort's elevators. In 2019, it took 10 days to assemble with a team of 39 Contemporary Resort bakers. It featured 10 hidden "Frozen" and "it's a small world" symbols, as well as nine hidden Mickeys.

This 18-foot tall display was crafted from the following:

I have been told that guests might be able to find in the American Adventure at Epcot a full-sized gingerbread display of the U.S. Capitol Building, the Lincoln Memorial, and the Washington Memorial. Besides including Hidden Mickeys, the display was built using over 50 pounds of gingerbread and 20 pounds of icing.

"While we know (the gingerbread house displays) are a favorite of people taking in the holiday decor, we're not able to include those displays due to physical distancing guidelines," said a Disney spokesman.

All of these holiday enhancements that make a Christmas at Walt Disney World so memorable and magical are due to the work of Holiday Services who so often do all this work without recognition that I wanted to spotlight them in this column.