Star Wars Quotes that are Ubiquitous in Pop Culture

We love to quote movies. Why do we do that? To remember or reenact a scene from the story that we enjoyed or to play the part of a favorite character? Absolutely. It's more than that sometimes. There are some movies that are more quotable than others and some of the most-quotable live on in modern memes. Star Wars is no exception and because of its longevity, many quotes and phrases have entered our common vernacular. Quote Star Wars in a conversation or in a speech and instantly some familiar phrases come to mind.

Like I said, we quote movies to recall those special moments because they were exciting and memorable. Then there are some phrases that go beyond the framework of the movie and can be applied to real life and particular situations. Some might even simply be part of our everyday dealings. Here are a few, but not all, that I think are among the top quotes from Star Wars that are ubiquitous in pop culture.

"May the Force be with you"

Han's first sign of belief in the Force. © Lucasfilm.

This one is the granddaddy of all Star Wars sayings. It's a greeting, a farewell, a blessing, and a prayer. It's versatile and used by everyone, not just Jedi. We heard it in the first movie, Star Wars, and fans used it instantly. Saying it amongst friends and fellow fans was a means to bond over the common admiration of the film.

"People started seeing the world in the terms that Star Wars had laid down. People would say 'May the Force be with you.' It was kind of a code, almost, that proved you were one of the people who had seen the film and you were connecting with other people who had seen the film. Star Wars became like a kind of handshake."  – Leo Braudy, Professor and Cultural Historian, USC, Empire of Dreams

Not bad for a phrase that wasn't on posters or in previews. "May the Force be with you" has also been modified for the official (or pseudo-official?) Star Wars Day—May the 4th. Lucasfilm, Disney, and even Hasbro have adopted the phrase for release of Star Wars products and information on that day when fans ready their wallets (the day is followed by "Revenge of the 5th").

There had to be a Yoda quote in here! Yoda has an age-old philosophy. I mean, he's ancient (900 years old) so we assume he holds some wisdom. A lot of what he says makes sense even without the context of The Empire Strikes Back. He has so many great sayings that it is hard to narrow down to one (for the purposes of this list anyway). This line came out long before Nike's "Just do it" campaign but it has a similar meaning: thinking too much can lead to doubt and inaction, so skip straight to the action will full conviction.

With so many wise words from the Jedi Master, you could argue some others are practiced more in common speech but it can be tricky to figure which ones work well outside the auspices of the movies. "Fear is the path of the Dark Side," is popular, mostly becuase it was in the trailer for Episode I, but also because it rings true. "Wars not make one great," is a favorite that takes the air out of modern ideas of success and praiseworthiness. Yet, "Do or do not. There is no try," to me, seems more easily applicable to the need for motivation in our lives. It is a harsh teaching; sometimes, all we can do is try. Yoda would prefer we at least try with confidence and with, above all, belief.

"This is the way"

The newcomer from The Mandalorian, "This is the way" caught on pretty quick because it was easy to apply to almost anything you do. It can underscore your own code whether that is your personal ethics or your method of folding laundry.

This is the way, the way is this. © Lucasfilm.

This phrase has been put to the test in the TV series. "The way" isn't so strict as the Mandalorian may have originally thought. The way is a code but the code is there to preserve life, and as his adventures proceed, he learns that preserving life is greater than the code. "The Way" will become his new personal code. It will be the Mandalorian code modified and expanded. He's learning from other Mandalorians that the strict unshakable adherence to the written code often places him at odds with those who would be his allies. We, along with Din, realize that the allies, and Grogu, are more valuable than the code. It is easy to see this in our own life where we learn and change and expand our understanding of the universe.

"I find your lack of faith disturbing"

"I find your lack of faith disturbing" was more of a threat in its original context. I will force you to believe. You better believe, or else! It's a bad way of saying, "Oh ye of little faith." The irony behind the line is that Vader is totally not concerned with this Imperial officer's religious persuasion in the least. This outburst by the Sith Lord is simply a show of power. It exemplifies exactly what the Empire is planning to do to the planets of the galaxy: subjugate them by fear.

Vader's use of the Force didn't actually help the Empire regain the stolen data tapes. © Lucasfilm.

When I've heard this used in conversation in our world it is often used ironically. Nobody really uses it as a threat nor do they use it to merely reference the movie. It is used humorously out of context. It can often be used in a discussion of an impossible task or situation. It may be spoken in a group when someone is unsure of their ability to face a difficult undertaking where it could provide a bit of encouragement yet still shrouded in humor.

"I am your father"

It really doesn't matter if the "No. I am your father" is quoted exactly or not. The sentiment is the same, the meaning is the same. Vader is talking to Luke so if someone says, "Luke, I am your father," it is fine. I say this because some fans I've seen and some I've known bristle at someone who doesn't quote it exactly right. We can forget that the reason it is being quoted at all is because it is one of the most surprising plot twists in movie history. People quote it still because it was so powerful. It resonates with us even after all this time.

It has also been borrowed and spoofed countless times in television and film. Here are just a couple of examples: 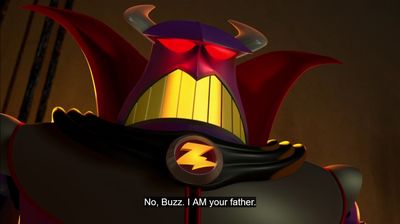 Buzz Lightyear was always a knock-off of Star Wars and Toy Story 2 doubled-down on this parody with Evil Emperor Zurg. © Disney / Pixar. 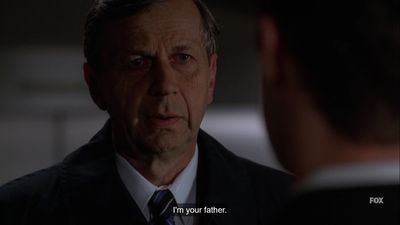 There are many more that I cannot cover here (like Spaceballs) but hopefully these instances support the notion that when the phrase is uttered, images of Luke and Vader and the impact of their story, almost always come to mind.

"These aren't the droids you're looking for"

People try the Jedi mind trick in daily life when they know they can't get away with something or even when, for example, telling your parter to make a grocery list ("You will get me brownies"). Not only is this phrase used when we pretend to do the mind trick to jokingly try to get our way, it is also sometimes used as an expression when you realize the object of some search you've been conducting ends up not being the object you actually need. In that context it's sort of like "barking up the wrong tree."

"These aren't the ____ you're looking for." Fill in the blank when you find yourself in a jam. © Lucasfilm.

Regardless of its use, the saying conjures up Star Wars and images of Obi-Wan Kenobi fooling hapless Stormtroopers in one of the first glimpes of a Jedi Force ability. As ubiquitous as it is, it's not always easy to pull off. Watch Conan O'Brien mess up this line in the presence of Mark Hamill himself:

There are nine films and many quotable lines so this list isn't definitive. There are scores of other quotes from the Star Wars universe that we could include here. I tried to show ones that aren't just memes and there are hundreds of those. What are some of your favorites that you've said or heard in everyday speech?