Welcome back to another Disney Top 5. I hope you are all healthy and safe out there.

Most of the snow in my yard has just about melted here in New York and today was a sunny and warm 53 degrees outside. I've lived here long enough to know that the month of March can trick you awfully quick, so I'm absolutely expecting to be hit again with winter. That said, the signs of spring are slowly making them selves known. It's been a rough, cold winter spending almost all of my time at home, semi-quarantined. As much of a skier as I am, I am looking forward to some warmer and longer days. One of those things that I'm definitely hoping for is the possibility of taking a trip with my family. While any sort of trip would do at this point, my thoughts, obviously, dwell on Walt Disney World and when we can finally head back. I still don't know exactly when that's going to be, but I do hope it's sometime soon.

Since I can't be in the most magical place on Earth, at least not just yet, the least I could do is continue my series delving further into each Walt Disney World attraction. Last time here on MousePlanet, I broke through the doors into Epcot and went deep into the park's iconic Spaceship Earth attraction. Judging by the comments from that article, you readers are as passionate about this classic Disney attraction as I am. But for now, let's leave Spaceship Earth behind and head into Future World West. This is my favorite section of Future World both for the attractions and for the lay of the land, not to mention the food. The west side is broken up into three different areas: the sea, the land, and the imagination. The surrounding landscapes, gardens, and ponds create one of my favorite places to walk around in Walt Disney World. Couple that with one of my favorite sit down restaurants, Coral Reef, and my favorite food court, Sunshine Seasons, and it's no wonder why it's my favorite section of Future World.

I thought I'd start things off on this side of the park with a pavilion that we seem to end up spending a lot of time in on each trip, The Seas With Nemo and Friends. I grew up on an island and have spent a considerable chunk of time in my life in, on, or under the water. To say that I have a strong connection with the sea is an understatement. As much as I love skiing and being in the mountains, I literally need to be near a body of water in order to consider myself complete. When it comes to landlocked Walt Disney World, it's no surprise that I have always gravitated to resorts like Port Orleans Riverside, the Polynesian and my favorite, the Yacht Club. So, it's no shocker that I enjoy this entire pavilion dedicated to the living seas. (And yes, that's an obvious nod to the pavilion's former name.) What are my favorite things about this pavilion, the largest attraction in Epcot? Let's take a closer look with my Top 5 things to love about The Seas With Nemo and Friends.

As someone whose family and friends have owned boats and who has lived by the water his entire life, trust me when I say that Pixar nailed the seagulls in Finding Nemo. I remember sitting in the theater when the film was originally released and literally having a laugh out loud moment when the first, "Mine…mine…mine," was uttered by the birds on the screen. It's a small detail in the film, but one that's just so perfect. My response was something like, "Yes…that's probably what seagulls are saying!" Genius. 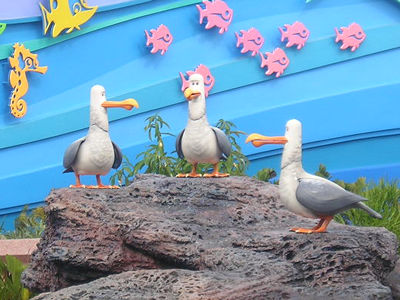 The first time we went to Epcot after the Living Seas was transformed into Nemo, I wasn't aware that the seagulls out in front of the attraction made the sounds. I always try to refrain from online reports or spoilers when it comes to new attractions. Needless to say, I was pretty ecstatic that the Imagineers included this hysterical little detail. I also love that it's not consistent. That would be too annoying. It's a detail you have to wait for, but if you're a fan of the movie, it's worth it. These little guys never cease to bring a smile to my face.

The Imagineering crew must have expected massive crowds for Nemo because they constructed an equally massive queue that, at least in my considerable experience, has never been crowded. I'm not sure I've ever waited in line for Nemo. As a matter of fact, we typically walk right though just about to the clam-mobile boarding area. That certainly doesn't mean that the Nemo queue isn't worth checking out as you breeze on through. I love the beginning room where you're "at the beach." 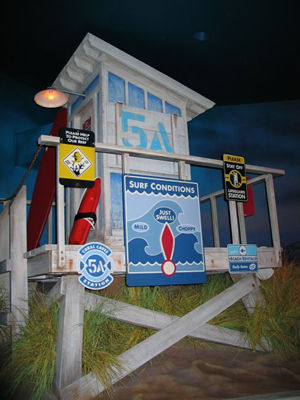 "Somewhere, beyond the sea." Photo by Brian Warneke.

From there, the rusty railings and the impression that you are in fact under the sea make for an impressive amount of detail. One of the more charming aspects of the film was the school of fish that would turn into different shapes as they were talking to Nemo's dad, Marlin. I'm partial, of course, to when they form the shape of Cinderella Castle. It's a fun detail that the kids in your group will be especially crazy about.

One of my favorite rooms in any attraction is the "jellyfish room" inside the ride itself. As you search for Nemo you glide past some very cool set pieces, a few very simple animatronic sea creatures from the film and some ingeniously integrated video screens. The best, to me, has to be the room where Marlin and Dory encounter the sea of jellyfish. It's a great moment in the film and it translated well into the attraction. 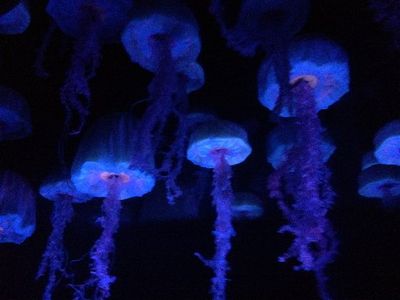 The jellyfish room in The Seas with Nemo and Friends is a great example of old school Disney practical effects. Photo by Chris Barry.

While I can certainly appreciate the current trend of integrating video screen technology into attractions, I'm a much bigger fan of practical effects. I like when something is physically built and fleshed out in front of you like a more old school Disney attraction. They could've filled this room with projections of jellyfish everywhere, but I'm thrilled that they actually built them and hung them all over the room. It's a classic and it's a very cool effect.

To be fair, it's been a long time since we even stopped into Turtle Talk with Crush. We typically ride the ride and then walk right into the Sea Base Alpha and enjoy the aquariums. However, back when the attraction first opened in 2007, I had twin 5-year-old boys and a 8-year-old daughter. Turtle Talk was one of those magic Disney moments when you look over at your child and they are just amazed at the fact that these characters they love so much are actually speaking to them personally. 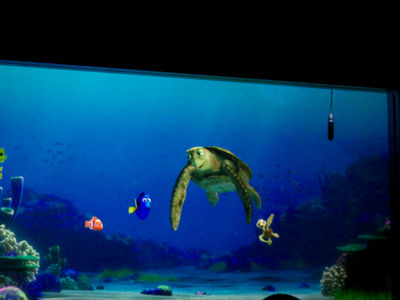 When their faces light up and they react to the screen as if it's real, it's pretty darn amazing because to them it is real and that's what taking your children to Disney is all about. I miss those moments for sure. I'm in no rush, but I imagine one day I'll take my grandkids in there and relive one of my favorite Disney little kid moments. Until then, thanks for the memories Dude.

Here on Long Island we have all sorts of diverse sea life in our waters. The North Shore has the Long Island Sound which ranges from a mile or so across where I live all the way to 20 miles across where my folks live further out east. Our south shore is the Atlantic Ocean, of course, so we've got it all, dolphins, sharks, whales, turtles, and seals in the winter. I grew up on boats and fishing off the North Shore beaches and currently live a half mile or so from the Sound, so I've had plenty of exposure to aquatic creatures of all kinds. One of the things I don't get to see here, as opposed to some of you living in Florida, are manatees, a creature I've always been fascinated with. Watching these gentle giants in the tanks at Epcot has been one of my favorite things to at Disney over the years. It's a must see stop every time I walk into the building. 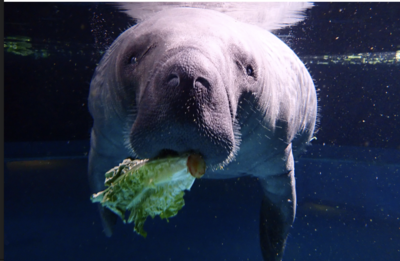 I could watch the manatees for hours at The Seas with Nemo and Friends…with no wait at all mind you. ©Disney

One of the truly great things about this particular exhibit is that the Epcot manatees are typically rescues or in need of rehabilitation. Manatees are frequently the victims of boating accidents in Florida. The marine biologists at Epcot take good care of these fascinating creatures with the goal of releasing many of them back into the wild when they are ready. I'm frequently one of the only people with their faces pressed up against the manatee tank and that's a shame. Slow down, take some of your precious time and spend it with these amazing animals while they are being taken care of in Epcot and the whole conservation theme in The Seas With Nemo and Friends comes into clear focus.

I've heard the argument, "I didn't go to Disney to go to an aquarium." OK. I can sort of see your point. But consider this point. You may think the aquarium in your home city is pretty big? Imagine that you just walked into Epcot and are looking up at Spaceship Earth. Pretty large object right? Now realize that you could fit the entirety of Spaceship Earth into the Seas aquarium and, as always with Walt Disney World, you'll soon realize that there's a whole lot more there than you think there is.

I'm constantly preaching to readers that slowing down and appreciating the details at Walt Disney World is really what it's all about. The Seas with Nemo and Friends is one of those Disney treasures that takes some time to experience, but it's time well spent, in my opinion. Yes, there's nothing thrilling about the ride. It's definitely geared to the younger set of guests. But to me and to my family, it's not about the thrills and obviously, it's not about us entertaining our little kids anymore. The whole pavilion is a cohesive experience. There's a lot of Disney. There's a lot of nature. There's a lot of good messages being telegraphed. It's an entire package and one that we always enjoy when we're there. Make sure to give The Seas with Nemo and Friends a little bit more of your time on your next magical trip to Disney. Look for me. I'll be over by the manatee tank!

That's all for this time. As always, I'd like to hear what you have to say. Click on the link below, let me hear your thoughts on my list or let me hear your own. Stay safe and I'll see you next time with another Disney Top 5.