The Disneyland Resort set is set to reopen next month after being closed for more than a year due to the global pandemic, but it seems that the company is looking much further ahead as it plans its future in Anaheim.

In an initiative dubbed "DisneylandForward," the company plans to ask the City of Anaheim to revisit the 1993 Disneyland Resort Specific Plan, and make updates that would permit development of new theme park, hotel, shopping and entertainment venues on land Disney already owns. 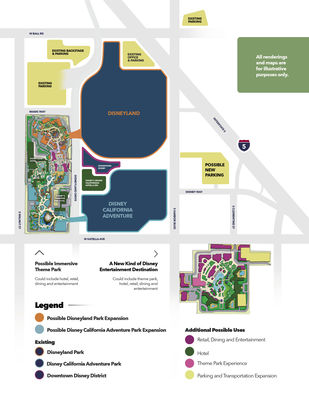 Concept art provided by Disney invites the viewer to imagine the possibilities if the City of Anaheim permits Disney to create a mixed-use development. Photo © Disney.

Disney officials laid out their case during a conference call on Thursday morning. The 1993 agreement set up land use and site development standards for the Disneyland Resort. Each parcel was designated for use in one of five "districts," with specific rules governing each. The theme park district included Disneyland and the parking lot which eventually became Disney California Adventure), the hotel district, which included the Disneyland Hotel and what is now the Paradise Pier Hotel. There were also districts for parking, and for future expansion.

Disney has filled all of the space earmarked as theme park, and has no place to expand without taking out existing park space, as was the case when Big Thunder Ranch was razed to make room for Star Wars Galaxy's Edge, and when a Bug's Land gave way to the upcoming Avengers Campus. Disney's plans to build a new resort hotel were stymied in 2018, in part because the site proposed for the project was deemed to be part of the parking district.

Disney owns plenty of land to develop, but that land isn’t properly zoned for the use they want. The company seeks to update the existing approvals to allow integrated development on several parcels, including the existing Toy Story and Simba parking lots, and land currently zoned only for hotel district uses. The company also wants to revisit the Eastern Gateway project, which Disney dropped in 2017 due to ongoing disputes with the city and local business owners. 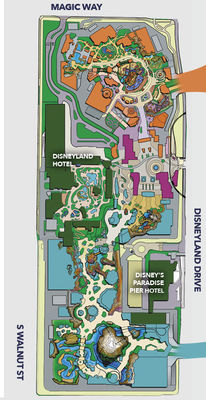 One possibility is to expand the existing theme parks across Disneyland Drive and into the current hotel district. Photo © Disney. 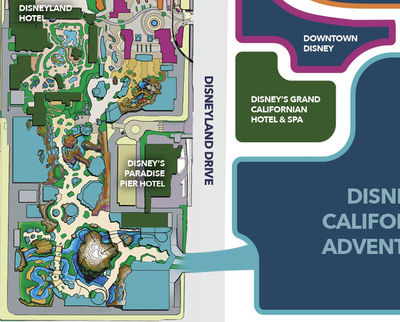 A close-up of the map shows a possible expansion of Disney California Adventure across Disneyland Drive and into the Simba parking lot. Photo © Disney. 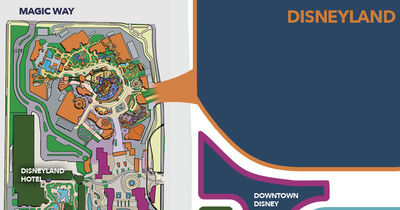 Another close-up shows a potential for extending Disneyland park as far as the Disneyland Hotel. Photo © Disney.

“We’ve had a long history of being bold in Anaheim, and we want to continue to be bold. But we do have constraints here in Anaheim. For our Imagineers, there is no shortage of good ideas, content and stories to tell. Unfortunately, if we can’t bring these ideas to Anaheim based on the current limitations, then Disney’s investment goes elsewhere to our other parks.”

Disney envisions a multi-year public review and approval process, which would culminate in a formal presentation to the planning commission and approval by the city council.

Mike Lyster, public information officer for the City of Anaheim, said the city is open to looking at more flexible zoning, and notes that this has been done in the past to grant the permission to construct the Grand Californian Hotel. In fact, public records show that the Disneyland Resort Specific Plan has been adjusted and amended more than a dozen times, most recently in 2011. 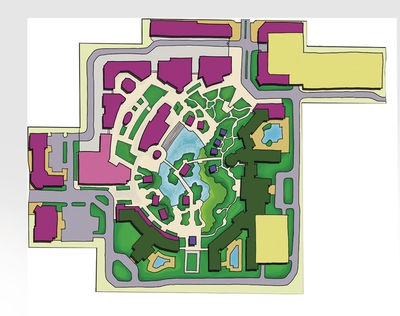 The existing Toy Story parking lot could be developed as a mixed use district, similar to the Disney Town complex at Shanghai Disney Resort or Disney Springs in Orlando. Photo © Disney. 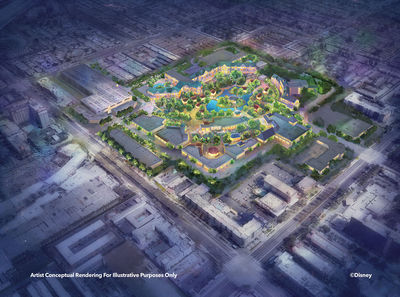 A concept rendering shows one possible use for the existing Toy Story parking lot. Photo © Disney. 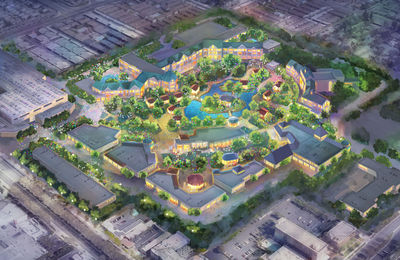 A closer look at what Disney terms the east side development. Photo © Disney.

Disney officials stress that they aren't seeking tax concessions or public funding for any future expansion, and aren't yet ready to announce any specific plans for the parcels. The company did, however, provide some concept art showing possible future uses for two parcels.

Disney's request comes as the City of Anaheim seeks to borrow $200 million to fill budget holes caused by the year-long closure of the Disneyland Resort and related businesses. Anaheim Mayor Harry Sidhu released the following statement:

"In the past year, we have seen what the Disneyland Resort means to Anaheim’s economy and the role it plays in helping us provide vital public services for our residents, neighborhoods and businesses. I welcome fresh thinking about how the Disneyland Resort evolves and how we best maximize this resource for our city." 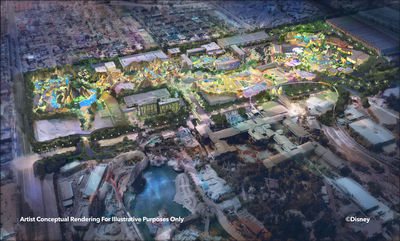 An artist rendering of possible development on the west side of the Disneyland Resort, expanding theme parks into the hotel district. Photo © Disney. 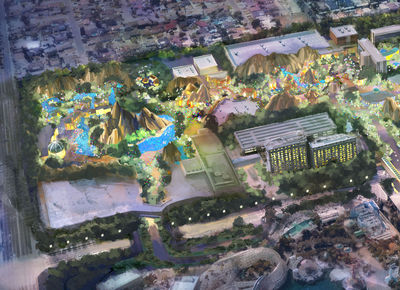 A closeup of the westside development rendering shows a pedestrian bridge connecting the current Disney California Adventure park to a new land in the existing Simba parking lot. Photo © Disney.

The request also comes at a time of growth in other areas of Anaheim, including development around Anaheim Stadium and the Honda Center, and days before the Angels baseball organization files development plans.

Lyster said he doesn't feel that Disney is choosing to present this proposal due to the city's financial difficulties, but notes that it should be very clear after the past year how much Anaheim relies on revenue from Disney to find important public services like police and fire.

You can see more of Disney's plans at the official Disneyland Forward website. This is a developing story, and we will update as possible. 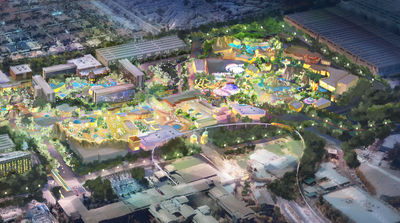 This rendering shows an expansion of Disneyland across Disneyland Drive and into a current parking lot. Photo © Disney. 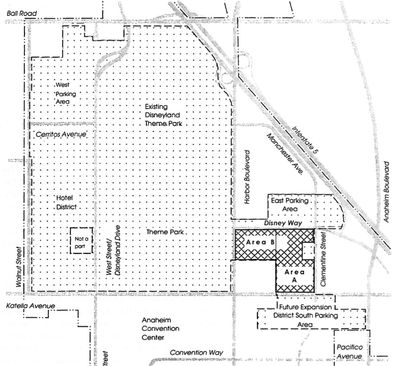 This map from the Disneyland Resort Specific Project shows how the property was divided up into five specific use areas. Photo courtesy City of Anaheim.