Welcome back to another Disney Top 5. As always, I hope you and your loved ones are all healthy and safe.

It's Spring break here in New York, which means a few things; warmer weather is starting to settle in, we have a week off from school – or whatever it is that were calling school during the time of coronavirus – and it's finally time for us to get back out in the garden. In this house, the garden is a big deal. Always has been and I imagine, it always will be. My lovely wife Diane prides herself on cultivating quite an impressive horticultural display here on our property. As I'm typing this article, I'm bathed in the glow of one of her indoor grow light gardens. Yes, that was gardens, plural. At the moment we have two indoor grow light gardens going in the house gestating seeds that will eventually be transplanted outdoors into the various flower and vegetable beds surrounding our home. Rather than laying on a beach somewhere for spring break, we've already spent a few days outside cleaning and clearing and getting the yard ready for the explosion of color and greenery that's headed this way in the next few weeks. And by sheer coincidence, I happen to be writing an article that fits right in with all that's currently going on here in the Barry household. As I continue my tour of each and every Walt Disney World attraction, it's time to pay some attention to Epcot's iconic Living with the Land.

Living with the Land – or as it was originally known, Listen to the Land – opened with the park then known as EPCOT Center back in 1982. The second Walt Disney World park's focus back then was considerably different then what it seems to be morphing into today. EPCOT was more of a "learning park" as opposed to a theme park, especially when you contrasted it to the only other option on property, the Magic Kingdom. Free of Disney characters and devoid of even Mickey Mouse himself, EPCOT was meant to be different. As the dedication plaque reads, "Here, human achievements are celebrated through imagination, wonders of enterprise and concepts of a future that promises new and exciting benefits for all. Living with the Land fit that bill perfectly. Here was an attraction that was essentially based on agriculture. Yes, there's more to it than that, but the bulk of this attraction takes you through greenhouses where you watch plants grow. Go ahead and pitch that idea to a board room full of Disney executives in 2021 and see how far you get.

A note or two before we get started. I have never taken the Behind the Seeds tour, which is why I left it off this list. I did however send my wife and daughter on the tour several years ago and they both loved it. I also don't consider The Garden Grill part of the attraction, even though it slowly spins right through it. I'm a big fan of this dining location, but it didn't really fit into this list.

It has to be said, I've never seen the queue area for Living with the Land. I understand there's a pretty nice mural with some quotes from all sorts of different people about our earth and respect for the land. 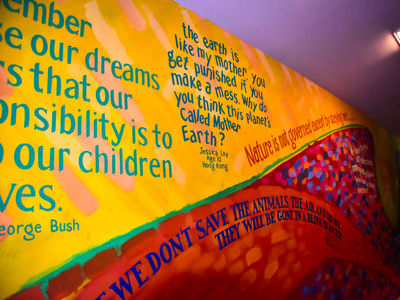 The queue for Living with the Land, something I've never actually seen before. Photo by Bonnie Fink.

The fact of the matter is, every time I head there, I pretty much walk right to a boat. Now, we don't go on holidays or major vacations, so maybe it gets busy when everything is jam packed, but I've never seen it that way – ever. That's not exactly a positive thing. I'm consistently worried that some corporate type at Disney will take a look at the attraction's lines and think that it's time for Living with the Land to go the way of the Dodo. I have similar worries about the Carousel of Progress over at the Magic Kingdom. I suspect that this ride might be sticking around for a while simply because of practicality. The greenhouses are pretty massive and they reportedly do grow and serve tons of vegetables in the restaurants each year. So, perhaps Living with the Land saves the company some money? No need to buy lettuce, tomatoes and peppers when they are growing them all right there in the Epcot greenhouses. At any rate, I'll take the nonexistent lines while I can and thoroughly enjoy them.

Let's face it, we Disney fans will love anything if you shape it like a Hidden Mickey. 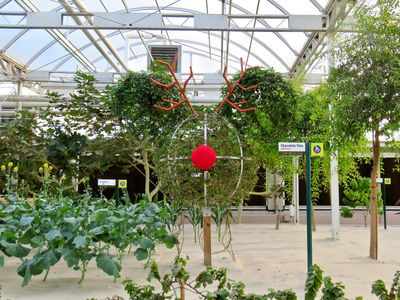 Living with the Land frequently showcases Mickey shaped tomatoes and topiaries like this one during the holidays. Photo by Alan S. Dalinka.

One of the things that I've always loved is spotting the Mickey shaped fruits in the Living with the Land greenhouses. Yes, they're doing some incredibly cool things in the greenhouses as far as sustainable crops, hydroponics, aquaculture and pest and disease resistant plants, but they're also growing Mickey Mouse shaped tomatoes! Reason enough for any Disney fan to take the ride.

3 - Rockwork and Waterfalls in the Rainforest Room

We all marvel at just what Disney is able to accomplish in their attractions and in the parks and resorts. One group of Imagineers that I think get taken for granted are the ones responsible for the stunning rockwork seen throughout the entire resort. The first two rooms on the Living with the Land ride, the deciduous forest and the rainforest, are extraordinary examples at just how good these artisans are. 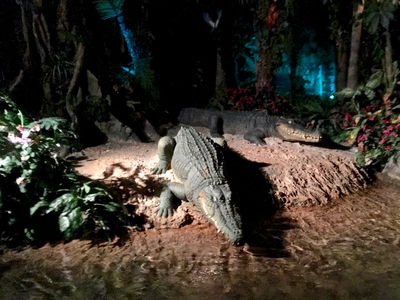 This photo doesn't do it justice, but these animatronic alligators live in a completely believable environment in Living with the Land. Photo by Alan S. Dalinka

If you didn't know you were on a theme park ride, you'd swear that the rocks and waterfalls in these two attraction rooms were the real thing. They're that good and do exactly what they're supposed to do – they transform your environment and make you feel like you've actually entered a different place. To me, the rainforest room on Living with the Land is one of the best attraction rooms on Disney property.

When Walt Disney was trying to shop around his ideas for the first theme park, Disneyland, back in the 1950's, he ended up realizing that he had all of the people he needed to create the various worlds and environments he was trying to build right there on the backlot of his own film studios. The set designers and builders helped bring Disneyland to life and elaborate authentic looking sets became a hallmark of Disney theme park design and construction. One of my favorite sets on Disney property has to be the farmhouse set in Living with the Land. 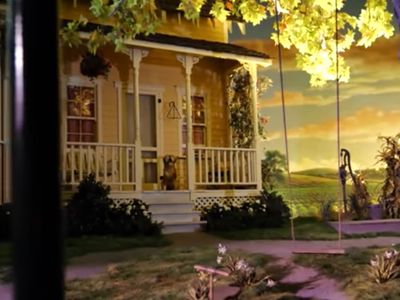 The farmhouse set in Living with the Land is chock full of Disney details. Photo by Chris Barry.

Basically, there's an entire house built here inside Living with the Land. I'm quite sure that it's more than likely not as big as it looks and the Imagineers used a little of their famous forced perspective to make us feel like we're looking at a full blown house. This classic American farmhouse is surrounded by vintage details like the front porch swing, the dinner bell, a scarecrow, a vintage child's tricycle and the whole scene is bathed in a stunning sunrise. Look closely at the address on the mailbox and you'll spot the number 82, which of course signifies 1982, the year the park and this attraction opened. The dog on the front porch is rumored to be the same dog used in Pirates of the Caribbean as well as the Carousel of Progress and all three of them are also rumored to be modeled after one of Walt Disney's own dogs. All these details together make this my favorite room in the attraction.

Most of us Disney fans out there are well aware that Epcot's Future World is undergoing a massive reimagining. Things are gone. Things are leaving. Things are scheduled to be added. One could argue, and this writer would agree, that change was needed in Future World. I've long been a subscriber to the Walt credo that the parks will never be completed and will always be undergoing change. I've been fine with that all along here in Epcot. I was a big fan of Maelstrom in Norway but when Frozen moved in, I thought they did an excellent job. Same thing with Nemo taking over The Living Seas. But it does need to be said that Living with the Land seems to be the last remaining bastion of the old Epcot as well as coming close to what Walt intended Epcot to be. 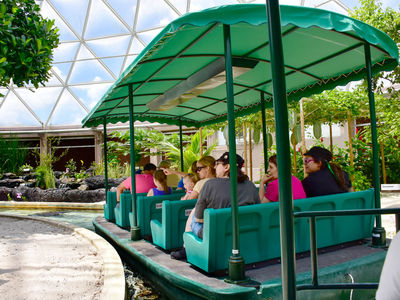 Living With the Land's hydroponic greenhouse gives guests a glimpse into the future of agriculture. Photo by Bonnie Fink.

When Walt proposed an actual city on his property in Central Florida, one of his key goals was to have Epcot be a place of learning and research. The Experimental Prototype Community of Tomorrow was supposed to be a place where the best and brightest came together to creatively solve the world's problems. Once Walt passed away and that grand idea was shelved, Epcot transformed into an amazing new type of theme park, one that sort of resembled a permanent world's fair. Over the years things have evolved as the company has focused more on entertaining us in Epcot as opposed to instructing us. If you think about it, Living with the Land is still trying to make the world a better place. There are still scientists in those greenhouses trying to improve agriculture and solve problems. The tour through it is part show and part real time learning and it's been fairly unchanged since opening day.

So, does that mean Living with the Land is destined to be overtaken and changed? Is there some sort of high tech upgrade that would even work with this attraction? You don't hear too much being discussed about this corner of The Land pavilion. For those of us that like the simplicity and the old school style of Living with the Land, that might be a great thing. Personally, I have welcomed Nemo into Future World and Arendelle into Norway with open arms. I'm also more than ready to welcome Remy into France and The Guardians into Future World East. However, that doesn't mean that I want a Cars overlay on Test Track or Buzz Lightyear to be shoehorned into Mission:Space. I like that Epcot has its own attractions separate from the Disney stable of films and I really hope that Living with the Land kind of stays just the way it is. They could alter some of the effects in the rooms and change the films a little bit every now and then, but I hope that it keeps honoring Walt's original Epcot vision and remains a place where good work is being done to improve something in the world.

That's all for this time. As always, I'd like to hear what you have to say. Click on the link below and share your thoughts on Living with the Land. Stay safe and I'll see you next time with another Disney Top 5.