Avengers Campus: Get Ready to Assemble!

"There was an idea…called the Avengers initiative. The idea was to bring together a group of remarkable people, to see if they could become something more." - Nick Fury

Nick Fury would be proud. In 2017, Disneyland Resort celebrated "Summer of Heroes" welcoming the new Guardians of the Galaxy: Mission Breakout! to Disney California Adventure Park. Marvel fans soon spotted something more next to The Collector's Fortress, a yellow hatch with a big "A" on the lid. The initiative was set in motion, a new land was on the way—Avengers Campus.

Josh D'Amaro, chairman of Disney Parks, Experiences and Products, announced earlier this month that Avengers Campus is set to receive its newest recruits on June 4, 2021. Set up like a college or business campus structure (think Google or Pixar HQ), Avengers Campus (Centralized Assembly Mobilized to Prepare, Unite, and Safeguard) is modeled as an immersive land where you are a part of the action. Here, you can channel Spider-Man on the virtual WEB Slingers attraction, or catch your favorite Avengers in action as they battle Taskmaster in a rooftop stunt show. If hunger is your superpower, head over to Pym Test Kitchen and Tasting Lab for some size-altered snacks and sustenance, courtesy of the quantum tunnel. While you take in the marvel-ous details, you might catch Dr. Strange's mystical show at his Sanctum or prove to Thor you're worthy enough to lift Mjölnir.

Avengers Campus is set to house two attractions, In addition to WEB Slingers, you can look forward to the E-Ticket Quinjet Experience, expected to open with the completion of phase two. With that in mind, here is what you can expect from Disney California Adventure Park's newest district, once Tony Stark removes his construction walls.

WEB SLINGERS: A SPIDER-MAN ADVENTURE: Join Peter Parker and associates as they recruit you to help capture the renegade Spider-bots. You'll don "visual enhancing goggles" as you experience this dark ride inside WEB (Worldwide Engineering Brigade) Headquarters, an old Stark auto warehouse. As Peter explains his newest invention, the Spider-Bot, chaos ensues and the Bots escape. Through the use of motion mapping technology, you'll track the rogue robots and be able to shoot webbing out of your wrists, just like Spider-Man! (Marvel Comic fans may notice that Peter's two co-hosts are Doreen Green, a.k.a. Squirrel Girl, and Lunella Lafeyette, or Moon Girl).

GUARDIANS OF THE GALAXY MISSION BREAKOUT!: The attraction relocates from Hollywood Land to Avengers Campus. The Collector has captured Peter Quill, Gamora, and the rest of the Guardians to add to his collection. It's up to Rocket Raccoon and you to bust the ragtag space team out of confinement. Quill still holds his dance-off competition in front of the fortress. Look for daily updated entertainment schedules 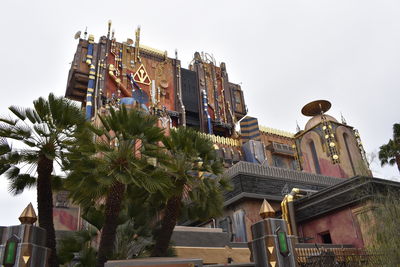 The Collector's Fortress now lords over Avengers Campus. Even though the land has changed, you can still rock out to the attraction's 1980s soundtrack. Photo by Lisa Baxter.

QUINJET EXPERIENCE: Primed to be Avengers Campus' super attraction, this experience takes you on an adventure to Wakanda where you'll fight alongside the Avengers battling a mysterious and dangerous foe. Disney Imagineers have been hard at work creating the innovative concept which puts guests right in the middle of the battle.

PYM TEST KITCHEN: Typical of Ant-Man, in his attempt of using Pym Particles to create a delicious menu worthy of his avenging friends, something has gone awry. Take a look at some of these mixed-up mouthfuls!

PYM TASTING LAB: Decorated by Lang, the adjoining bar is adorned with a giant beer can and Christmas lights. But, it's the drink menu that will entice you. Try the "Molecular Meltdown" or "Honey Buzz" for some new tastes. Bruce Banner can even find his Pingo Doce, which is part-lime, part-vanilla, and part-Hulk.

SHAWARMA PALACE CART: Only Robert Downey Jr. can ad-lib a line and have it result in a theme park food cart. In The Avengers, after Tony Stark awakens from his space freefall, he excitedly mentions the shawarma restaurant down the street. Cue to the end credits where the six Avengers are sitting in the eatery, munching on their shawarma. Yes, RDJ improvised the line, which became a classic in the Marvel Cinematic Universe. Shawarma Palace Cart serves up "New York's Tastiest" (chicken shawarma), and "Impossible Victory Falafel" (plant-based falafel with hummus, crusted cauliflower, and lemon tahini).

TERRAN TREATS: Almost every land in Disney California Adventure Park has a churro cart, and Avengers Campus is no exception. But in this case, the cart is owned by The Collector, Tanaleer Tivan. His churros are out-of-this-world! You can choose from two sweet selections. The Cosmic Cream Orb is a giant cream puff filled with raspberry mousse and topped with a crunchy layer. I'm going for the Sweet Spiral Rations, which are coiled then dusted with colored sugar. But the color may not match the flavor. The green churro may be butterscotch and not green apple. Only The Collector knows. The churros are red, orange, yellow, green, blue, and purple—Infinity Stones, anyone?

WEB SUPPLIERS: Across from WEB Slingers: A Spider-Man Adventure, you'll find WEB Suppliers, home of the Spider-bot and Spider-Man light goggle eyeglasses. The techy accessories can make up to 17 different expressions. Add some web-slinger cuffs with authentic lights and sounds, and you're ready to battle Vulture or Mysterio. 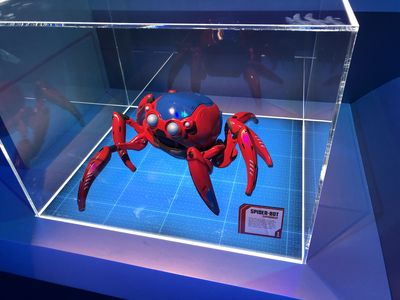 You can purchase a Spider-bot in the image of your favorite characters including Hulk, Iron Man, and of course, Spider-Man. Photo by Todd Pickering.

CAMPUS SUPPLY POD: Look for Avengers Campus-themed apparel and hats at this location.

COLLECTOR'S WAREHOUSE: Once you exit Guardians of the Galaxy: Mission Breakout!, you'll find yourself funneled into this merchandise shop. Here, you can find all things Marvel, including comic books, DVDs, apparel, and costumes.

AVENGERS HQ STUNT SHOW: Led by Captain America (of course), the rest of the Avengers work together to stop Taskmaster, who has the ability to mimic his foes' fighting style. A challenge easily accepted by Cap, Black Widow, Captain Marvel, Black Panther, and Spider-Man. 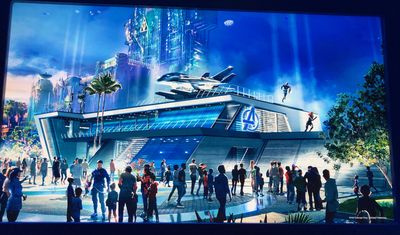 The parked quinjet adds another element to the spontaneous stunt shows atop the Avengers Headquarters. Photo MousePlanet archives.

DR. STRANGE'S SANCTUM: Dr. Strange has unlocked a mystical chamber and shares its power with the world. You are invited to interact with Dr. Strange as he showcases his magical abilities, possibly even searching for an apprentice to help him. The center of the sanctuary, the Orb of Cagliosto, comes alive at night, illuminating the Sanctum with mystical aura.

THOR AND MJÖLNIR: Near Stephen Strange's otherwordly oasis, Thor may need help lifting his mighty hammer. But, who is most worthy?

DORA MILAJE TRAINING SESSIONS: Wakanda's fiercest fighters are on the lookout for new recruits to learn the ways of T'Challa and his ancestors. Similar to Disneyland's former Jedi Training Academy, this program invites would-be warriors to train the body and mind alike.

Expect some of your favorite Marvel Cinematic Universe heroes to join in the fun at Avengers Campus. 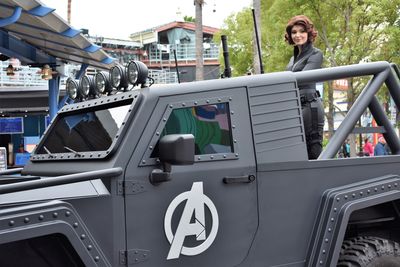 Black Widow and the Avengers jeep frequented Hollywood Land, but now you'll find her in a bigger universe surrounded by her fellow Avengers. Photo by Lisa Baxter.

When creating Avengers Campus, Disney Imagineers looked at a bigger universe than just California—Marvel Theme Park Universe, an alternate universe within the Marvel Multiverse. In addition to Disney California Adventure Park, you can channel your inner superhero at Avenger Campuses in Disneyland Paris and Hong Kong Disneyland. Avengers, get ready to assemble!