Disneyland's Star Wars: Rise of the Resistance had been open a mere three months when the California theme parks closed due to the global pandemic; certainly not enough time for Star Wars fans to get their fill of the incredible attraction. 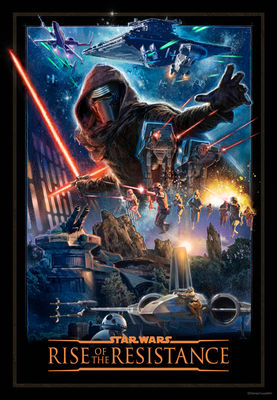 The reopening of Disneyland means fans get a second chance to experience the Rise of the Resistance attraction. Photo (c) Disney.

With Disneyland set to reopen on April 30, Disney officials announced today that the ride will not offer Fastpass when it reopens, and will instead use a virtual queue to assign boarding groups and manage the wait for hopeful riders. This is similar to the virtual queue that was used to control access to the land itself when Star Wars: Galaxy's Edge opened in 2019, and is the system Walt Disney World uses to manage the queue for their version of the attraction in Florida.

We published a guide to using the virtual queue when the ride first opened in 2020, and we've updated it below with COVID-related tips. One major change is that Disneyland will open the virtual queue twice each day: once at park opening for visitors who made a park reservation to start their day at Disneyland, and a second window in the afternoon to give visitors who may be park hopping after starting their day at Disney California Adventure a chance to get on the ride.

One big change between the original Disneyland system and the one now in place at Walt Disney World is that visitors do not need to be inside the theme park to enter the virtual queue. Walt Disney World guests who have a valid park pass for Disney's Hollywood Studios for that day can enter the virtual queue when it opens at 7:00 a.m. each morning, from wherever they happen to be. This helped eliminate the crowds that once gathered outside the theme park in the wee hours of the morning, with its associated crush to get into the park once the gates opened.

Disney officials haven't said whether a "remote virtual queue" (we're just making up names at this point) will be used at Disneyland when it reopens, but it would be lovely if it was. That would allow visitors to join the virtual queue from anywhere—even their homes or hotel rooms—instead of crashing the gates at opening. Also, given the vagaries of Disneyland's parking and security screening process, it would reduce the frustration among quests stuck in the Mickey and Friends parking structure line. We're waiting for more details from Disney, and will share them when we have them.

Now that an advance ticket purchase and reservations are required to enter Disneyland, you should be able to link the tickets for your entire travel party well before you try to enter the virtual queue. This is an important step if you want your entire party in the same boarding group once the virtual queue opens, and will allow each person to request a boarding group for the entire party, increasing your chances. We posted step-by-step instructions for linking tickets:

Getting questions on how to link tickets in the @DisneylandToday app so you can request a #RiseOfTheResistance boarding group for your whole party. 1) Open DL app; tap on the “hamburger” 2) Tap “Tickets and Passes” 1/3 pic.twitter.com/SnPcC32XQD

5) Scan the barcode of the ticket you want to link 6) Confirm the details. 7) Repeat steps 1-6 as necessary EVERYONE in your party can try to request a boarding group. 3/3 pic.twitter.com/Fzmj2xUwrj

Joining a boarding group is very similar to selecting a digital Fastpass. Users first select their party from a list of people to whom they are already linked in the Disneyland smartphone app, then choose to add their party to the boarding group. The app gives you your assigned boarding group, and lets you monitor the status of boarding groups.

Each person in your party can try to request to join a boarding group; once one person gets in, the others will get a message saying they've already been assigned to a boarding group. It's absolutely worth having everyone try who can.

Disneyland will allow customers with park-hopper tickets to change parks as early at 1:00 p.m. each day, and will open a second virtual queue in the afternoon to accommodate park hoppers. From the details posted on the Disney Parks Blog, these guests can join the virtual queue while still over at Disney California Adventure, and hop to Disneyland for their boarding group.

Based on his experience in Walt Disney World, Alan cautions, "The afternoon slot is risky—if the attraction has had a lot of down time [in thr morning], there'll be no slots."

When it's time for your boarding group to ride the attraction, the app will send an alert to your phone. Groups have up to two hours to make their way to the attraction after they are called. This grace period allows visitors plenty of time should they be in the middle of a ride, parade, or meal when they get the alert, and means you don't need to spend your day within a 50-foot radius of the attraction entrance.

We don't yet know how or if visitors will be able to join the virtual queue without using the Disneyland smartphone app. When the ride first opened, guests could also join the virtual queue by going to one of the cast member-assisted stations throughout Disneyland, but from reports at the time, there were rarely any boarding passes left by the time guests walked to those kiosks.

For those who don't use the Disneyland app, in-park signage at the guest relations kiosks will display the current boarding group, so that you'll know when it's time to head back to the attraction with your paper ticket.

When it opened last year, the Star Wars: Rise of the Resistance status and access page on the Disneyland app displayed the following information to help visitors keep track of their status:

We're waiting for an update from Disney on how the virtual queue will work for guests with special needs who use the Disability Access Service (DAS). When the ride opened in 2020,  Disney asked that all guests first request to join a boarding group using the virtual queue, and then visit a guest relations kiosk to renew or request a new DAS. Even with the DAS, the guest would still board the attraction based on the boarding group assigned by the virtual queue, but would use the accessible entrance to the ride.

We don't expect anything will change, but we've asked for confirmaiton from Disney.

The ride has a 40-inch height requirement, and riders who use a wheelchair must transfer to the ride vehicle to experience the entire attraction. Guests who cannot transfer from an ECV or wheelchair may be able to experience a portion of the preshow, but Disney will make accommodations on a case-by-case basis.

The ride also offers descriptive audio and hand-held captioning for riders with visual or hearing impairments.