My Disney Top 5 - Things to Love About Epcot's Mission:Space

Welcome back to another Disney Top 5. As always, I hope you are all healthy and safe and I do hope that some of you readers out there made it to the re-opening of Disneyland over the past few weeks. It's an extremely positive sign that things are headed in the right direction.

I'm continuing my long tour through each Walt Disney World attraction. I've only scratched the surface in Epcot, finishing off Future World West last time with Journey into Imagination with Figment. I got some great feedback from you faithful readers. Some love Figment just as much as I do. Others have, to put it kindly, a great distaste for this venerable Epcot attraction. One of the best things about writing for MousePlanet is hearing what you Disney fans out there have to say so keep your opinions and comments coming. I have no shortage of Disney themed ideas to write about especially when it comes to one of my favorite places to visit anywhere, Epcot.

It's time to head across the park to the opposite side of Future World – a name we'll be saying goodbye to sometime in the not so distant future as Epcot undergoes it's well earned and much needed facelift. I don't necessarily love the landscape and feel of Future World East as much as I do Future World West. I tend to spend a lot more time over with The Land, The Seas and Figment, but with my favorite Marvel characters, The Guardians of the Galaxy, headed to Future World East, that may all change. Peter Quill and his family of outcasts will have great company on this side of Epcot because two of Disney's best attractions call the east side home, Test Track and the subject of today's Top 5, Mission:Space.

Standing on the hallowed grounds of the former Horizons, Mission:Space was launched (Sorry, I had to to go for that one!) in 2003 with some rather impressive fanfare. Not only were all the Disney chiefs present, as one would expect, but the official grand opening was attended by the then head of NASA, Sean O'Keefe, as well as several bona fide astronauts, two of whom were being beamed in live from the International Space Station. The budget for this attraction was rumored to be around the $100 million mark, not the most expensive Disney attraction ever built, but still a pretty whopping dollar amount by any stretch of the imagination.

Mission:Space has a slightly checkered past. After the ride was launched, it became swiftly apparent that Disney needed to add motion sickness bags to the attraction and with good reason. Guests in the original Orange version of the ride are exposed to a gut wrenching 2.5Gs of force. Most astronauts are exposed to 3G and NASA tries to keep things below 4, so Mission:Space is doing the rocket launch some serious justice with 2.5. If you've ever experienced the Orange version of the ride, you know what I mean. Some people absolutely hate this ride, and that's a shame because the whole package is actually pretty darn impressive. I'm actually a big fan. Why is that? Let's take a look with my Top 5 things to love about Epcot's Mission:Space.

"Send them out through the gift shop," has always been an unofficial Disney credo when they are considering what to do with guests as they leave an attraction. Yes, Mission: Space does eventually end up in a gift shop and a pretty cool one at that, Mission:Space Cargo Bay. But it's the post show area right after you exit that has something for everybody. My kids typically wanted nothing to do with Mission: Space and neither did my wife, so they used to love waiting for me in the Advanced Training Lab. First things first: it's an extended AC break which is always welcome in the Orlando summer swelter. 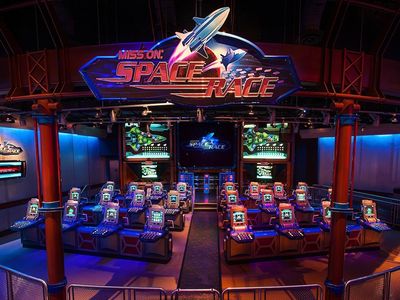 There's plenty of fun to be had at the Advanced Training Lab in the Mission:Space post show area. ©Disney

When they were little, my guys loved the Space Base playground full of nets and things to climb on. Both of my boys, as well as their dad, used to spend time playing the Expedition: Mars joystick game and then we all graduated to the "giant video game," known as Mission: Space Race. All in all, this is a well conceived and well executed post show. Keep in mind that you do not need to experience the attraction to head in here for a while and check it out. It's a fun place to take the kids for an indoor break, even if you don't blast off to Mars.

Since we're in the post show area of the attraction, I thought I'd draw your attention to one of the coolest "Big Figs" in any of the Walt Disney World theme parks. For those of you out there that aren't as Disney obsessed as some of us, Big Figs stands for Big Figures. Once upon a time you could actually buy Disney Big Figs from the Disney Store, online and in the parks. They were modeled after the large Disney character figures found in the old Disney Stores and scattered in various gift shops throughout the parks and resorts. 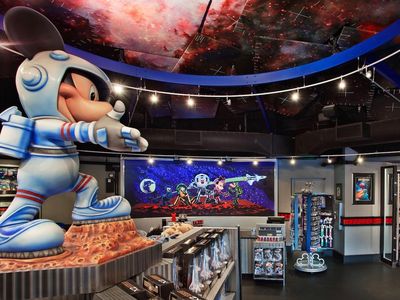 Astronaut Mickey towers over the Cargo Bay Gift Shop at the exit of Mission:Space. ©Disney

I'm pretty sure that Astronaut Mickey from the aforementioned Mission:Space Cargo Bay shop is my favorite Big Fig on Disney property. Once again, head into the exit of the attraction to check him out even if you don't feel up to the attraction. While you're there check out the cool mural behind the cash registers featuring the Fab Five all decked out in their best space outfits. Very cool.

One thing I truly love about the modern era of Disney attraction design is the obsessive attention to detail when it comes to props in the queues. My mind tends to go to Animal Kingdom's Expedition Everest. The Imagineers must have dug up every piece of vintage climbing gear they could possibly get their hands on for that one. Mission:Space is no slouch when it comes to the props department. Let's face it, what's cooler than the actual Lunar Rover that hangs from the ceiling. It is reportedly on loan from none other than the Smithsonian Institution itself. According to NASA, its the only one they built that's not actually still up on the Moon! 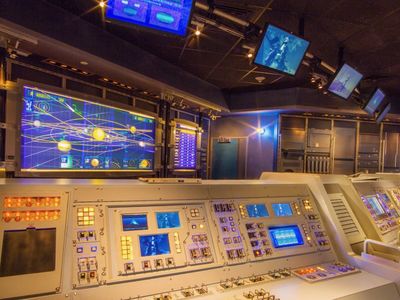 The control room that they built is ridiculously real looking and only helps to further the storyline that you are, in fact, headed into training. As if the lunar rover and control room weren't cool enough, my favorite piece of eye candy in the Mission:Space queue, and perhaps my favorite prop in any Disney attraction queue has to be the huge rotating Gravity Wheel. It's quite a sight. Be sure to look for the Horizons logo, a nod to the former attraction that once lived here.

In case you don't already know, Mission:Space has two different missions to choose from. The original Orange version of the attraction and the newer, tamer, Earth Green Mission are presented to you out front. Choose wisely. The missions and videos are different, but the main difference - and trust me, this is an oversimplification - is that Green doesn't spin. By that, I mean that you don't get the full g-force effect that you do in the Orange mission. And by effect, I don't mean special effect. I mean in Orange you literally feel the full force of 2.5 times the gravity on Earth which can be, how shall I say, disconcerting to some guests. 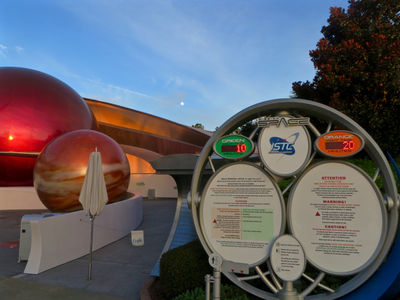 Pay heed to the signs outside of Epcot's Mission: Space and choose wisely. Photo by Alan S. Dalinka.

On the Green mission, you still get to blast off and experience being in a very realistic space capsule, you just don't get anywhere near the intensity. In my opinion, just about anyone can handle Green and enjoy the experience. Orange, on the other hand, is like nothing else I've ever experienced. It's incredible. It's intense. It can leave you feeling very, very…off? I've never gotten sick. But I've needed to sit down and grab my bearings for a while afterwards. If the intent of experiencing a Disney attraction is to transport you someplace else using your imagination, Mission:Space Orange does just that, but it's literally a physical journey as well. Not for everyone, but if you love it, like I alluded to, there's simply nothing else like it.

I have to say, there are moments when I'm at Walt Disney World where I stop in my tracks and feel awestruck by what I'm looking at. Space Mountain is a work of architectural beauty. The Tree of Life is simply breathtaking to behold. And still to this day, each time I head into Future World East and get my first glimpse of the Mission:Space pavilion, I tend to stop in my tracks. It's completely unique-looking, exhibiting architectural aspects that are definitely futuristic and yet, at the same time, classic. It's really a beautifully designed structure. 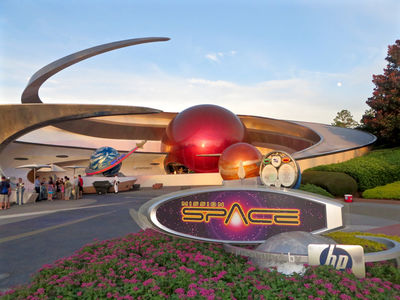 The Moon rises above the facade of Mission: Space at Epcot. Photo by Alan S. Dalinka.

Planetary Plaza, as the exterior of the attraction is known, welcomes you in with globes representing Earth, Mars and Jupiter. The curvilinear structure of the building is meant to give you the feeling of blasting off into outer space and it works its magic on me every time I look at it. It may very well be my favorite structure on Disney property.

Mission:Space, as I mentioned above, does have a little bit of a checkered past. People have gotten sick. People have been sent to the hospital. And yes, two people actually passed away after riding. Both had pre-existing conditions and probably should not have been in there in the first place; but still, tragedy and Walt Disney World are not words that go hand in hand. Orange, as noted above and as plastered all over the outside of the attraction, is seriously intense and if you have any of the ailments or health concerns listed, you shouldn't ride. I realize it's a whole different situation, but someone told me that Flight of Passage was like Soarin' over Pandora. My dad loves Soarin'. Flight of Passage sent him to the Animal Kingdom First Aid. He was a mess and never should have been on that ride at his age with his ailments. My point? Read the signs. Take the Orange mission seriously.

That said the Green mission is a whole other ballgame and it's a shame that many people steer clear of this ride because of Orange's reputation. Mission:Space is the whole package. It's an inspirational, fun, technologically impressive attraction and it shouldn't be dismissed just because of the air sickness bags. Green shouldn't make most people sick at all. If you freak out in enclosed spaces than, yes, you should probably keep heading over to Test Track next door. But if you're like me and love the whole idea of blasting off into outer space and feeling the awe and wonder that actual astronauts feel, then Mission:Space just might be your cup of tea.

That's all for this time. As always I'd like to hear what you have to say. Click on the link below. Share your thoughts on Mission:Space. Stay safe and I'll see you next time with another Disney Top 5.