A day after the Centers for Disease Control issued new guidelines for the use of face coverings in public, the Walt Disney World Resort announced a change in its own policy, to take effect Saturday, May 15.

The new policy, now posted on the Walt Disney World website, states that face coverings for guests are optional in outdoor common areas throughout the resort. The main exception is that guests must wear face coverings while in line for an attraction, starting at the entrance to the attraction and all the way to the exit, even if the queue is outdoors. This also applies to resort transportation and theater attractions. 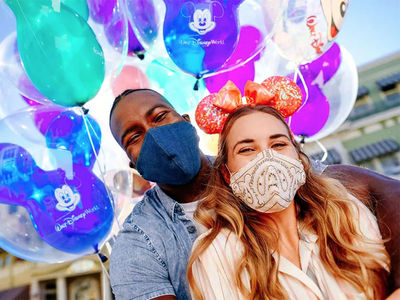 Walt Disney World visitors can take their masks off outdoors, unless waiting in line for a ride. Photo (c) Disney.

Face coverings are still required for all guests ages 2 and up while indoors, including stores and restaurants, except when the guest is actively eating or drinking while stationary.

At this time, Walt Disney World says it's gradually reducing physical distancing in theaters, attractions, and transportation, but says six-foot distancing is still in place at all dining and merchandise locations.

There are no changes to the policies for Walt Disney World cast members, who must still wear face coverings and maintain physical distancing at all times. 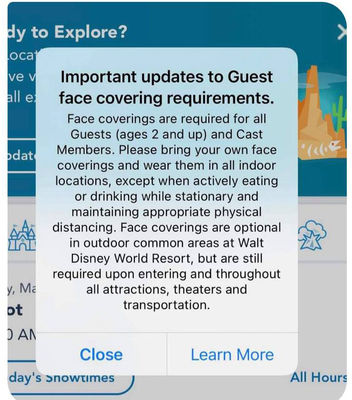 Disney alerted visitors to the new policy via a push notification on the My Disney Experience app Friday night.

Walt Disney World first announced this change to the public through a push notification sent through the My Disney Experience smartphone app late Friday night. At the same time, a Disney spokesperson said there are no changes to the policy at the Disneyland Resort in California.

“Disneyland Resort’s current guidelines, which require all guests (ages 2 and older) and Cast Members to wear face coverings, remain in effect until further notice. Policies will be evaluated in accordance with state and local recommendations as soon as guidance is released.”

Florida has been well ahead of much of the country in dropping masking requirements, and Florida governor DeSantis has also prohibitied businesses from requiring proof of vaccination from their customers.

California meanwhile is still under a statewide mask order, though California governor Gavin Newsom said on Friday that updated guidelines would be released in light of the new CDC guidance.